Queen’s University were just a missed conversion away from playing in Division 1B for the first time in their illustrious history.

In Pics: Buccs Save Best For Last As They Pip Queen’s To Promotion

Instead, Buccaneers pulled off a superb 18-17 play-off final victory at Dub Lane, their efforts at the breakdown preventing Queen’s from getting into their usual attacking flow.

The table-topping Belfast students had put 12 tries and 82 points on Ballymena last week, but Buccs came primed with a stifling game-plan and their own attack and well-drilled maul did some damage.

Two Michael Hanley penalties had the Pirates leading 6-5 at half-time, with Queen’s winger Graham Curtis squeezing over in the left corner for the opening try. The hosts were dominating possession but not getting the points to show for it. 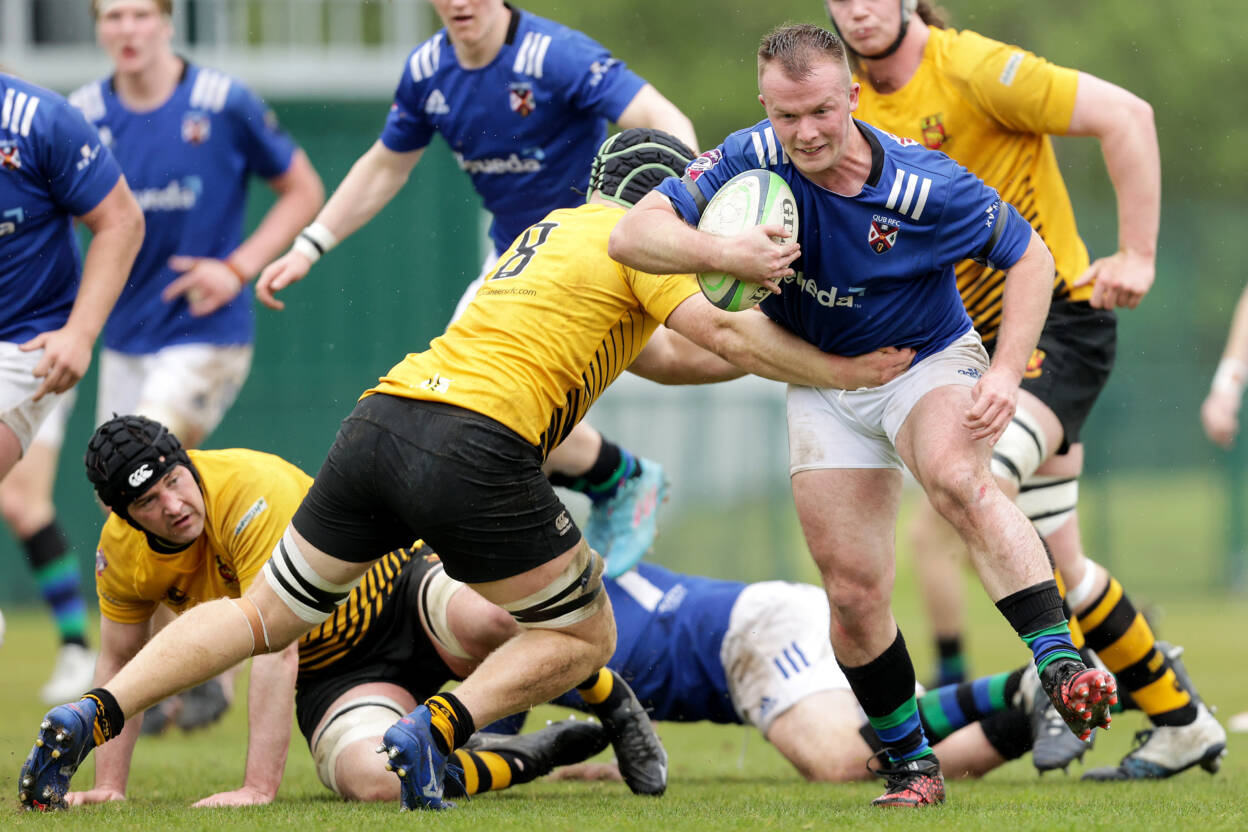 Buccs scrambled well to deal with line breaks from Curtis, Ben Heath and Michael Orr, before a possible turning point came when Queen’s prop George Saunderson barged over to make it 12-6.

The hosts’ defence could not hold out from a Buccs onslaught, though, as the midlanders retook the lead with a penalty try on the back of a Scott Wilson yellow card. Lock Danny Qualter soon drove over from close range.

In a typically tense and frenetic finish, Queen’s persistence was rewarded with a last-minute try out wide from Ireland Under-19 lock Charlie Irvine.

There was one cruel final twist, as young replacement James Humphreys’ conversion attempt came back off the near post and the final whistle saw battling Buccs erupt in celebration. 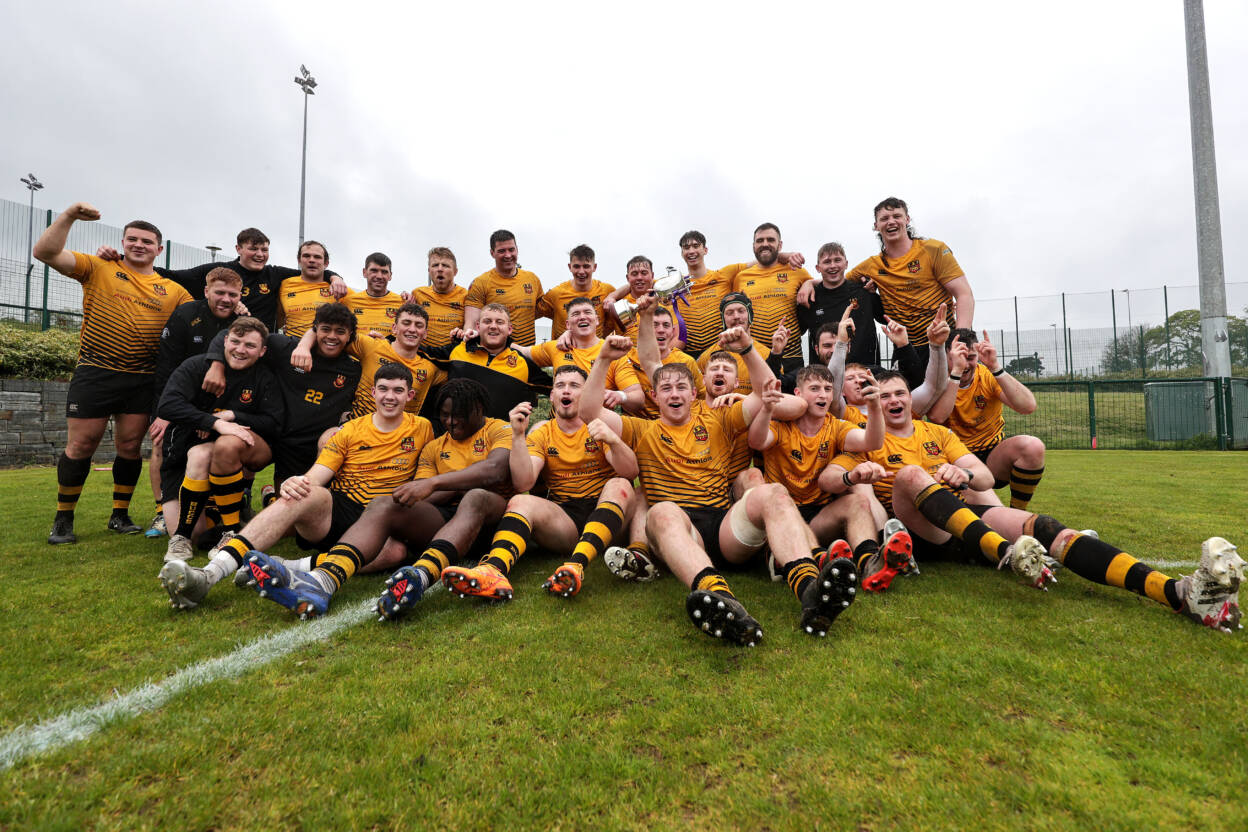 Blackrock College pulled off an incredible comeback, flooring Greystones to win 25-23 and gain promotion back to Division 2A. Centre Matthew Dwan’s try in the final play saw the visitors prevail at Dr Hickey Park.

Greystones looked well on course when leading 20-3 in the 53rd minute, their talismanic captain captain Killian Marmion converting tries from a rampaging Conor McAleer and Andrew Lynch, as well as landing two penalties.

Nonetheless, a Stephen McLoughlin try got Blackrock back within reach, and they punished a Michael Douglas sin-binning with a converted effort from playmaker Peter Quirke who finished with 15 points.

Marmion took his own tally to 13 points with a 72nd-minute penalty, giving ‘Stones a hard-earned 23-20 advantage, but ‘Rock stretched the home defence enough for Dwan to score on the standside right at the death. 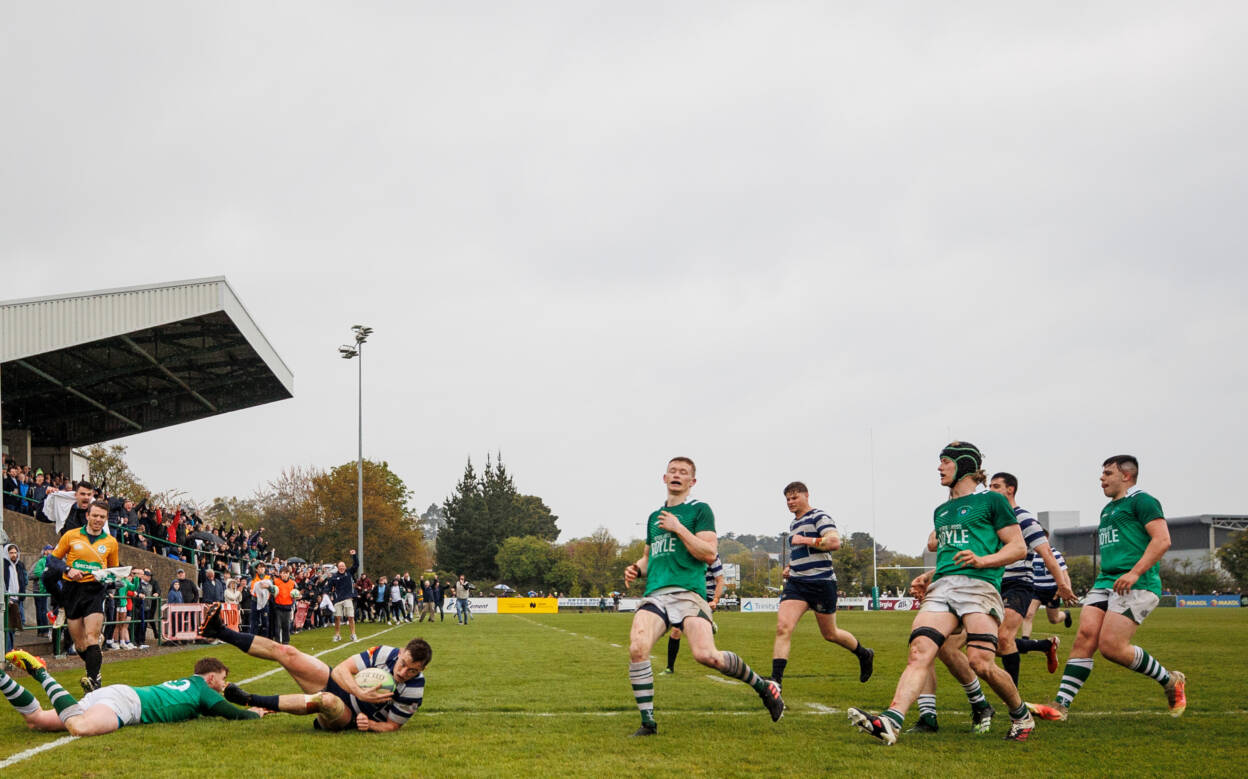 Enniscorthy, who came up from the junior ranks in 2019, were the only table-topping side to finish as play-off champions. They won the Division 2C promotion decider, running out 41-14 winners over Skerries at Alcast Park.

But Ben Manion’s well-drilled charges, roared on by the vocal home support, found another gear to reel off closing tries from Morycki, David O’Dwyer (from a Nick Doyle pass) and Tom Ryan. 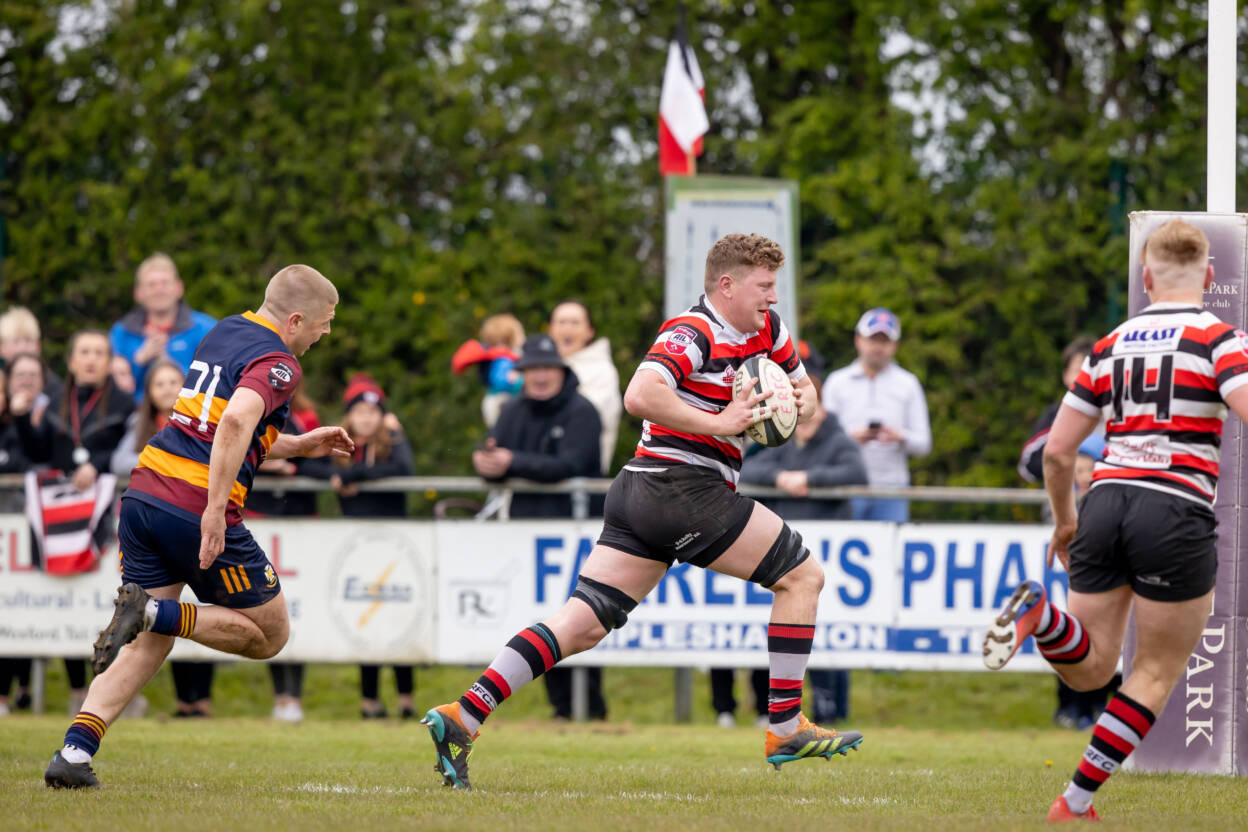 Davie Murphy and Daniel Pim, with a brilliant breakaway effort following a turnover, also dotted down during the second half as the Wexford men ran out deserving six-try winners.

14-man Clonmel, who had replacement Tony Cantwell sent off, held on for a 41-34 aggregate win at a very wet Judge’s Road which relegated City of Derry to junior rugby.

Looking to overturn a 16-point first leg deficit, Derry led 10-0 at half-time thanks mainly to a penalty try. Cantwell saw red for a head-high challenge on Derry captain Cathal Cregan.

Providing the inspiration for the visitors, Clonmel’s Ireland Under-19 winger Henry Buttimer blocked down a Ross McLaughlin kick and gathered the loose ball to touch down, halving the hosts’ lead.

A penalty from Dylan Cadogan cut the gap to 10-8 on the day, and near constant pressure from Derry yielded a 79th-minute try on the right wing for replacement Joel Smyth. Alex McDonnell converted but time was up on Derry’s spirited fightback.

Galwegians lost 15-3 at Ballina but held onto their Division 2B place thanks to a gritty 37-34 aggregate victory. Morgan Codyre’s first half penalty from halfway proved vital for the Blues.

Wingers Ian West and Cian Quinn notched tries during the opening half-an-hour for the Moy men, but a lone Harry West penalty was all they could muster during a rain-hit second half.