The Energia All-Ireland League Men’s Division 1A final next Sunday will be an all-Dublin affair after Terenure College reached the decider for the first time, while table toppers Clontarf ended Cork Constitution’s reign as champions.

In Pics: Second Half Tries Steer Clontarf Through To League Final 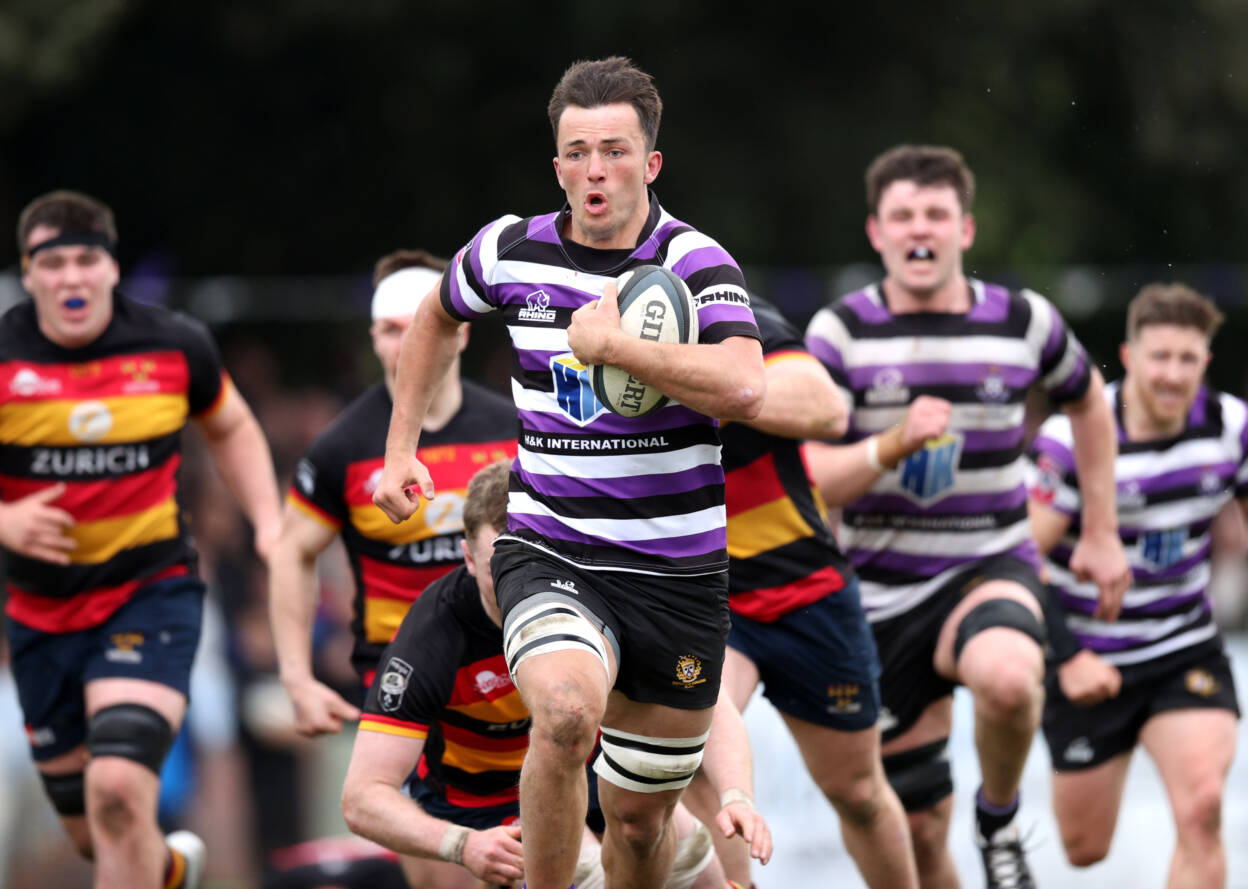 Five Caolan Dooley penalties and a 76th-minute try from full-back Adam La Grue proved enough for Terenure College, who edged out Lansdowne 20-18 in a cagey semi-final at Lakelands Park.

Lansdowne had a chance to take the game into extra-time, but Ireland Under-20 out-half Charlie Tector missed the conversion from the left after Sean Galvin’s try had given the visitors late hope.

The game doubled up as the Leinster Senior Cup final, so Terenure captain Harrison Brewer was presented with the provincial silverware afterwards, giving Sean Skehan’s charges a further boost ahead of next week’s All-Ireland decider.

Andy ‘Panda’ Keating led a strong scrummaging performance from Terenure, setting up two of winger Dooley’s four first half penalties which were backed by a significant wind.

Tector hit back in the 29th and 40th minutes to cut the gap to 12-6, while a late weaving break from centre Andy Marks showed what Lansdowne could do when afforded some space. 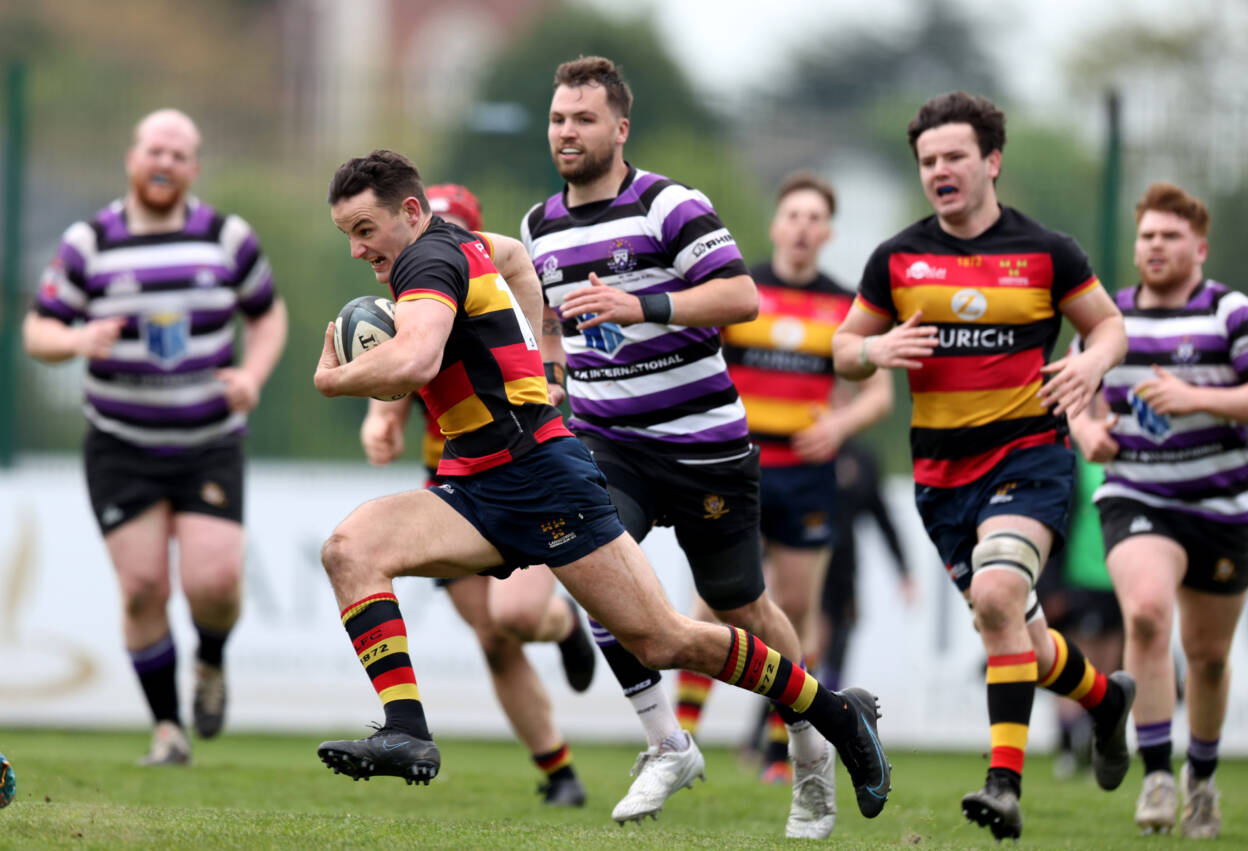 The defensive pressure had been suffocating at times during the opening 40 minutes, but Tector recovered from an early penalty miss on the resumption to dummy and dart his way over for a 49th-minute converted try.

Lansdowne were ahead for the first time, leading 13-12, and only dogged defence – with Clive Ross and captain Jack O’Sullivan to the fore – prevented Terenure from responding on the hour mark.

The big home crowd willed Brewer and his team-mates on and they duly delivered. Belfast man Conall Boomer was hugely influential as a replacement and Jordan Coghlan also carried well before Dooley kicked them back in front.

It was Boomer’s brilliant break up the right that led to ‘Nure’s only try, quick ruck ball being transferred across to the left wing where La Grue finished smartly. Dooley was unable to convert. 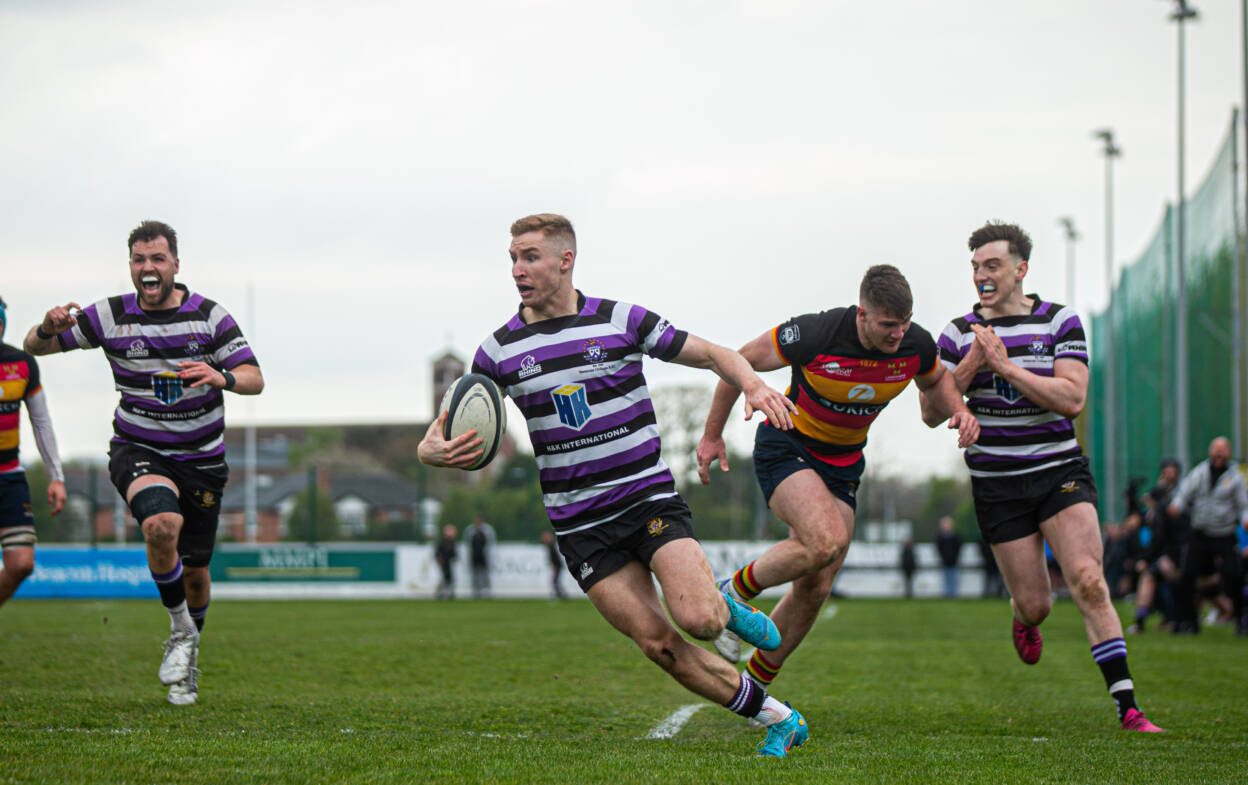 Now 18-13 behind, Lansdowne rallied in the dying minutes. Replacement Stephen Madigan’s cross-field kick was gobbled up by winger Galvin for a late lifeline, but Tector sent the conversion wide and Terenure hung on to seal a trip to the Aviva Stadium.

Meeting them at Irish Rugby HQ next week will be 2014 and 2016 champions Clontarf. Andy Wood’s men followed through on their consistent form across the regular season to defeat Cork Constitution 29-13 at Castle Avenue.

‘Tarf were missing five players who are with Leinster in South Africa, including David Hawkshaw and Alex Soroka, but pulled clear in the second half thanks to converted tries from Tadhg Bird and in-form hooker Dylan Donnellan.

Donnellan, the division’s top try scorer this season, now has 18 tries to his name – an outstanding haul for any player, let alone a front row forward.

Con looked like they might spoil the party when captain Aidan Moynihan kicked them into an early 6-0 lead as they quickly used the strong wind to their advantage.

However, Clontarf’s well-oiled attack soon found its rhythm with skipper Matt D’Arcy have some key involvements and the pack producing quick ball for half-backs Conor Kelly and Angus Lloyd.

D’Arcy’s centre partner Michael Courtney barged over in the 13th minute, swiftly followed by winger Cian O’Donoghue with a diving one-handed finish after Kelly’s expertly-floated long pass had released him.

O’Donoghue then doubled his tally in the left corner, benefiting from D’Arcy combining with Fionn Gilbert in the build-up. 15-6 in arrears, Con managed to answer back on the stroke of half-time. 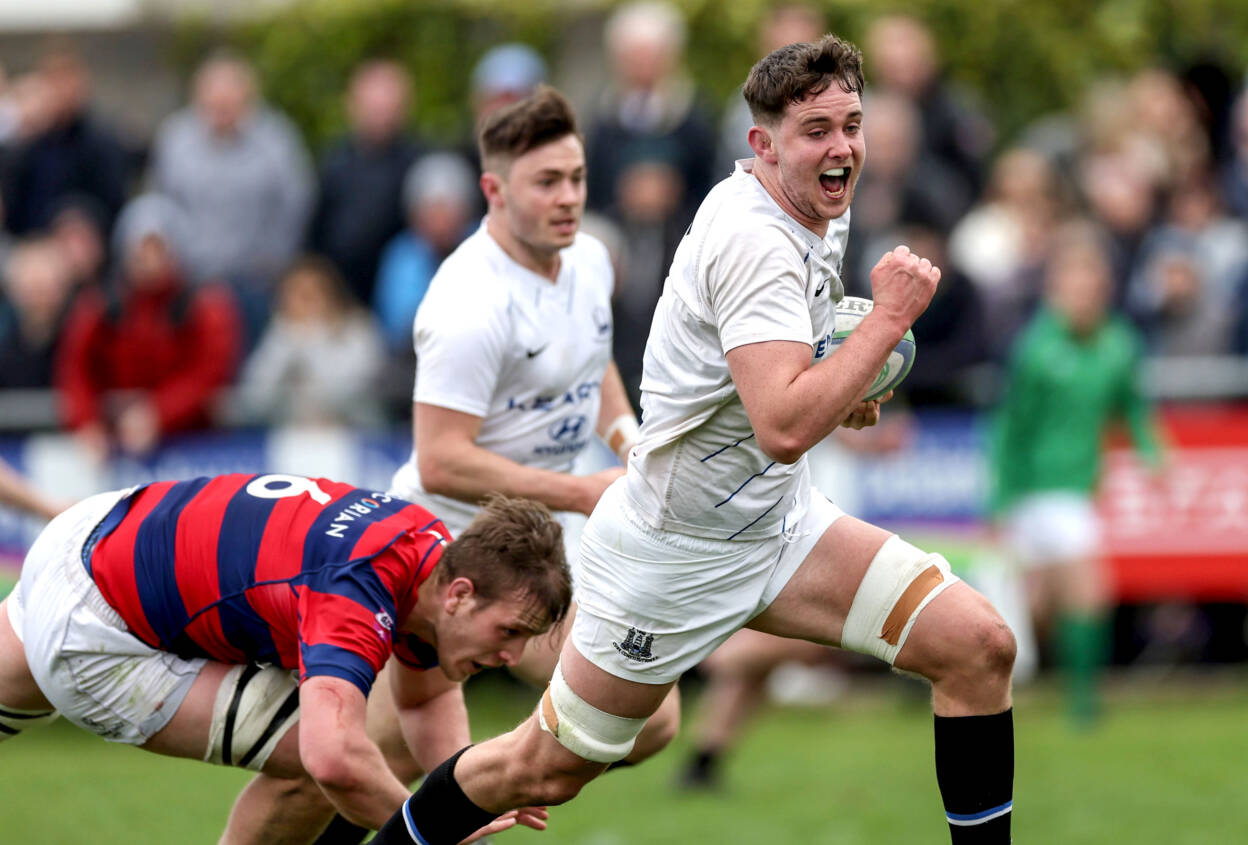 Billy Crowley’s short pass sprung John Forde in between two defenders and the flanker went on a superb rampaging 35-metre run in under the posts.

The conversion from Moynihan left just two points between the sides, but Clontarf made sure they got the next score to rock the 2019 winners back on their heels.

The hosts regained the momentum in the 45th minute when tricky full-back Bird unlocked the Con defence with a sidestepping run, brilliantly slipping through the smallest of gaps and getting away from two more defenders to score closer to the posts. 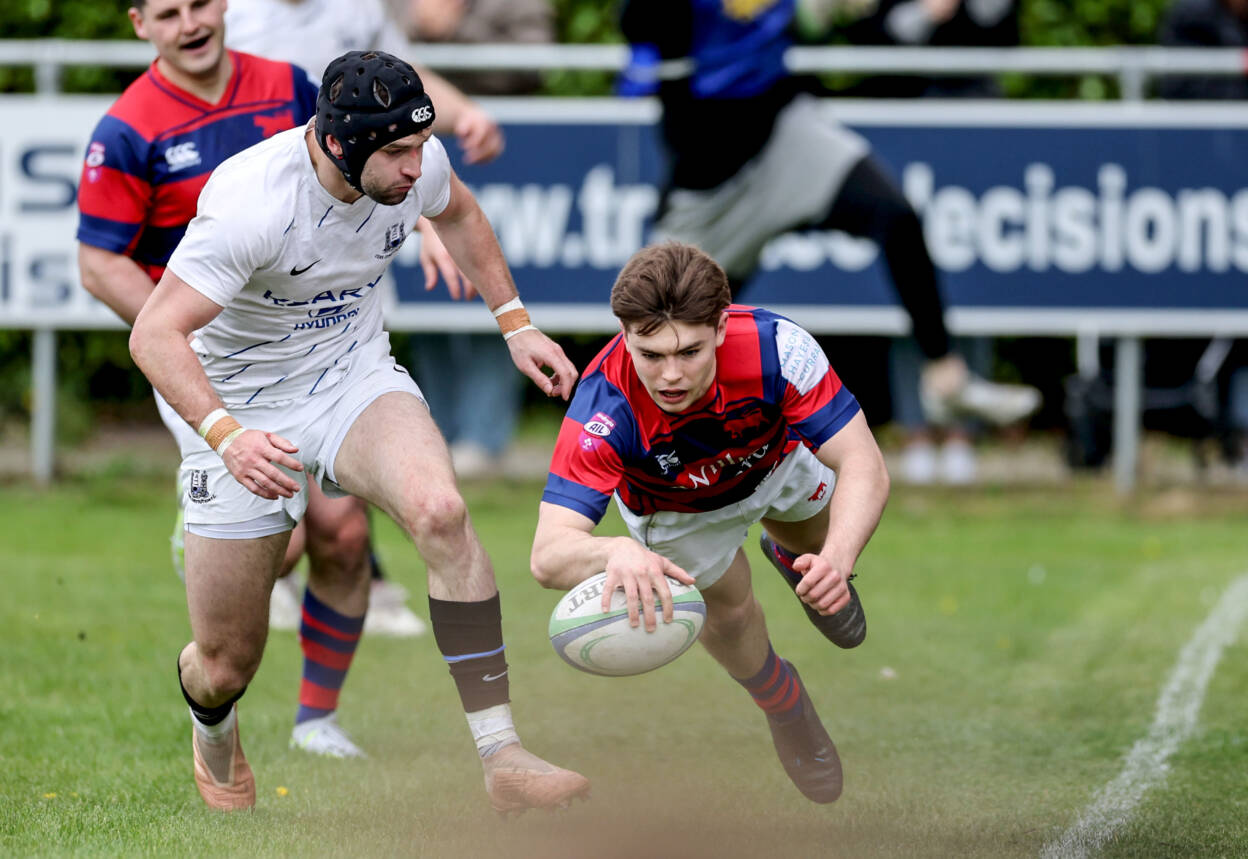 The post played a part in Clontarf’s next try as out-half Kelly missed a penalty off an upright, but ‘Tarf swept up the rebound and hammered away through their forwards. With support from Ivan Soroka, Donnellan rumbled over in the 53rd minute.

The Kelly-converted try was a real sucker punch to Con’s title aspirations, despite the best efforts of Munster’s Jack Crowley and Alex McHenry who came on for the final half an hour.

Crowley came closest to scoring, tackled short just a metre out before Clontarf won a crucial turnover. The home defence tightened up thereafter, some loose passing and a crooked lineout letting Con down as their challenge petered out. 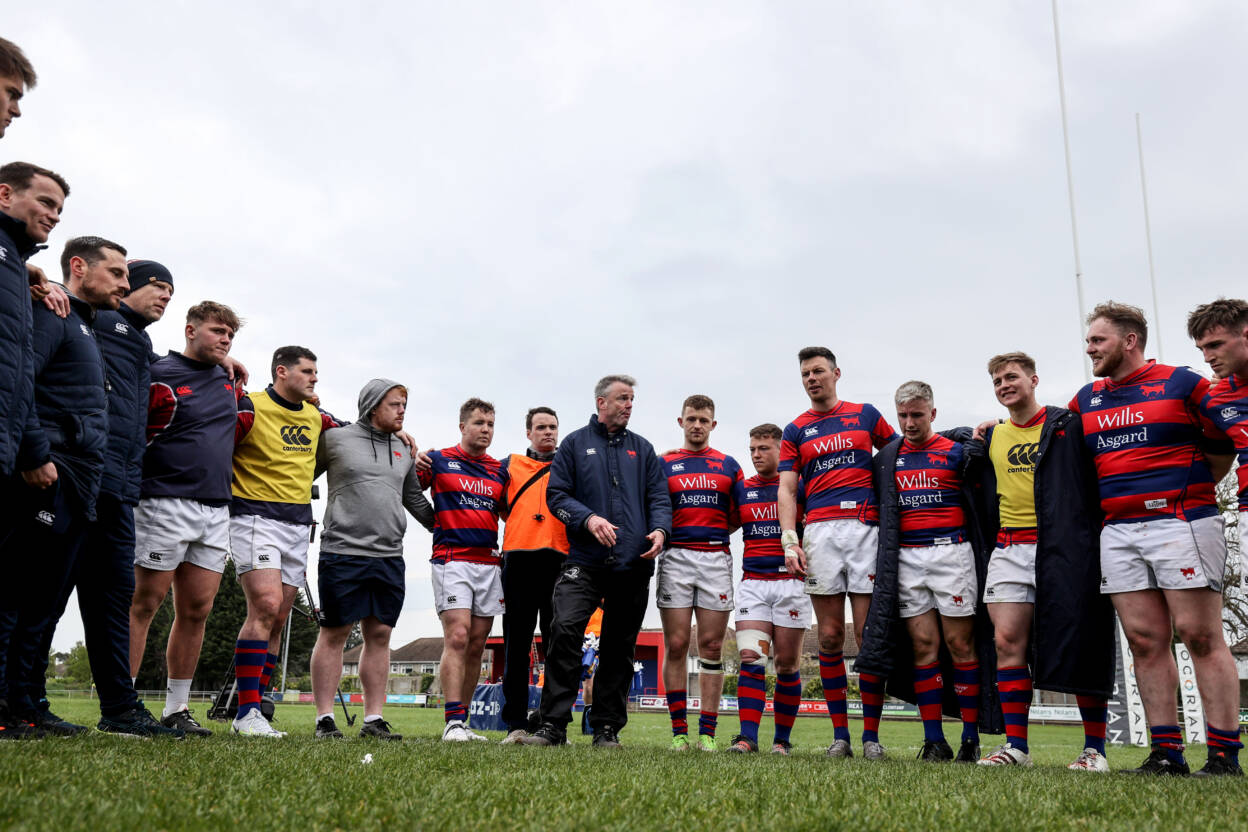 Ballynahinch hold a four-point lead at the halfway stage in the Division 1A relegation play-off. First half tries from Josh Hanlon and George Pringle guided them to a 21-17 first leg victory at UCC.

The Cork students, who had assistant coach Cian Bohane lining out at out-half, replied to an early penalty when scrum half Andrew O’Mahony sniped through for a converted try after a lineout steal.

Ireland Under-20 hooker Hanlon crossed from a ‘Hinch maul, five minutes later, and with the visitors’ scrum getting on top, Conor McAuley snappily sent centre Pringle over in the 28th minute.

Turning around with a 15-7 deficit, UCC had a dream start to the second half when Matthew Bowen was taken out by Ronan Patterson as he attempted to chase his own kick. The ‘Hinch winger saw yellow and also harshly conceded a penalty try.

Daniel Squires tagged on a 50th-minute penalty for a 17-15 home lead, but ‘Hinch used their superior scrum to storm back, providing the platform for penalties from Conor Rankin after 60 and 69 minutes.

Adam Craig’s side should have finished further in front, though, and the tie still remains in the balance. Greg Hutley hit the post with a drop goal attempt and missed out on a try due to a tremendous cover tackle from Bowen.