The Ireland Under-18 Schools team, sponsored by PwC, closed out the U-18 Men’s Six Nations Festival with a well-judged 40-14 win over Italy in Marcoussis.

Paul Barr’s side built on their 46-26 midweek victory over Wales, racking up six tries with winger Hugo McLaughlin taking his tally for the Easter tournament to three.

It is the first time Ireland have won two games at an U-18 Six Nations Festival and bodes well for these players, who will chase further representative honours in the coming years.

Italy, who had lost flanker Vittorio Padoan to a yellow card, revived their fortunes with converted scores from Nicola Bozzo and Cesare Zucconi in quick succession.

The pressure was back on Ireland, but they rose to it with two tries in the final 10 minutes from Harry Long and Danny Sheahan, both converted by fellow replacement Sean Naughton. 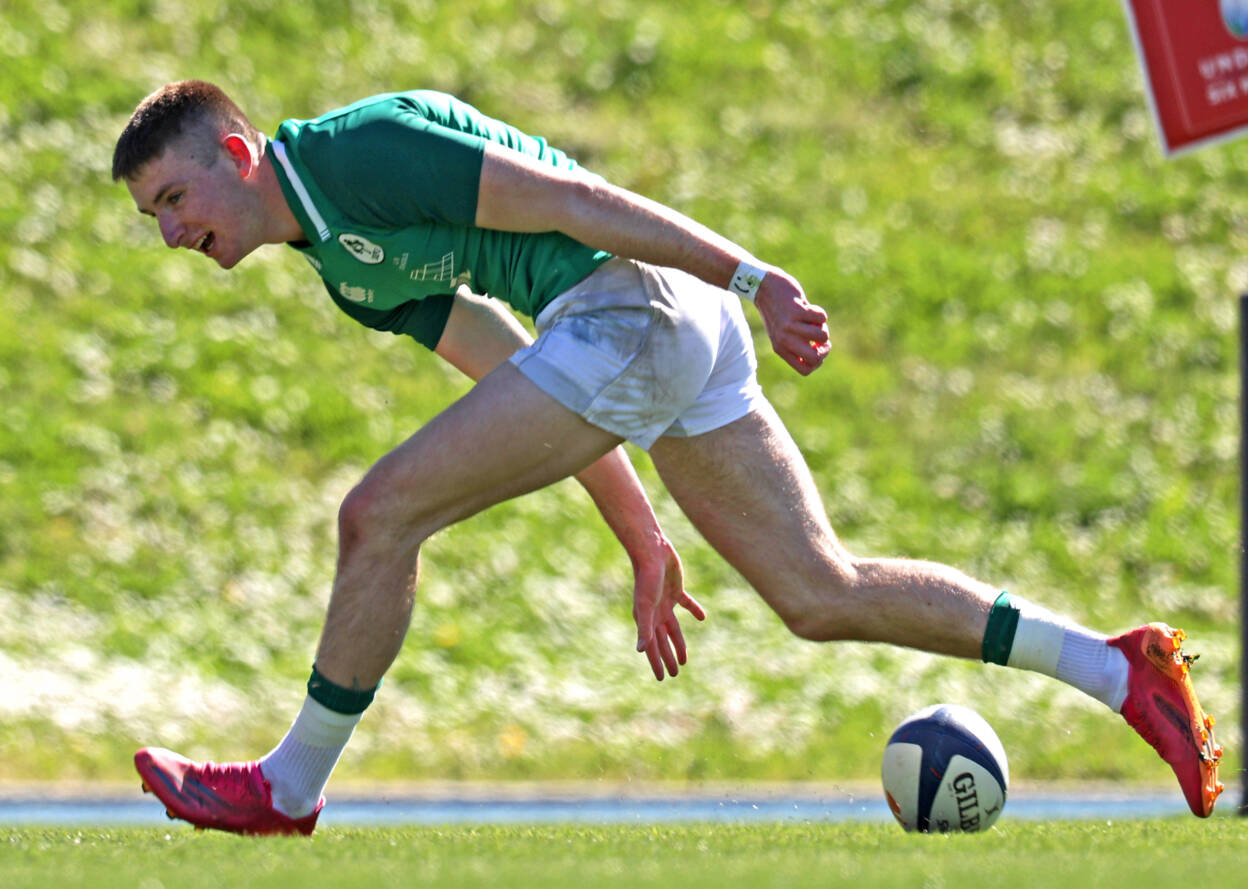 Tom Stewart was held up in the 10th minute after strong carrying from his front row colleagues Zac Solomon and Sparrow, but the opening try arrived from some sharp footballing skills just a couple of minutes later.

Playing an advantage for an Italian knock-on, Brian Gleeson got the ball back to Jake O’Riordan whose clever cross-field kick put Leonardo Sodo Migliori under pressure. The inrushing O’Connor got his right boot to the ball, nudging it through for a smart finish.

Murphy’s conversion bounced over off both posts, and Ireland did not have long to wait for their second try. A pacy attack spread out to the left where full-back O’Connor’s overhead pass took out two defenders and put McLaughlin over to make it 12-0. 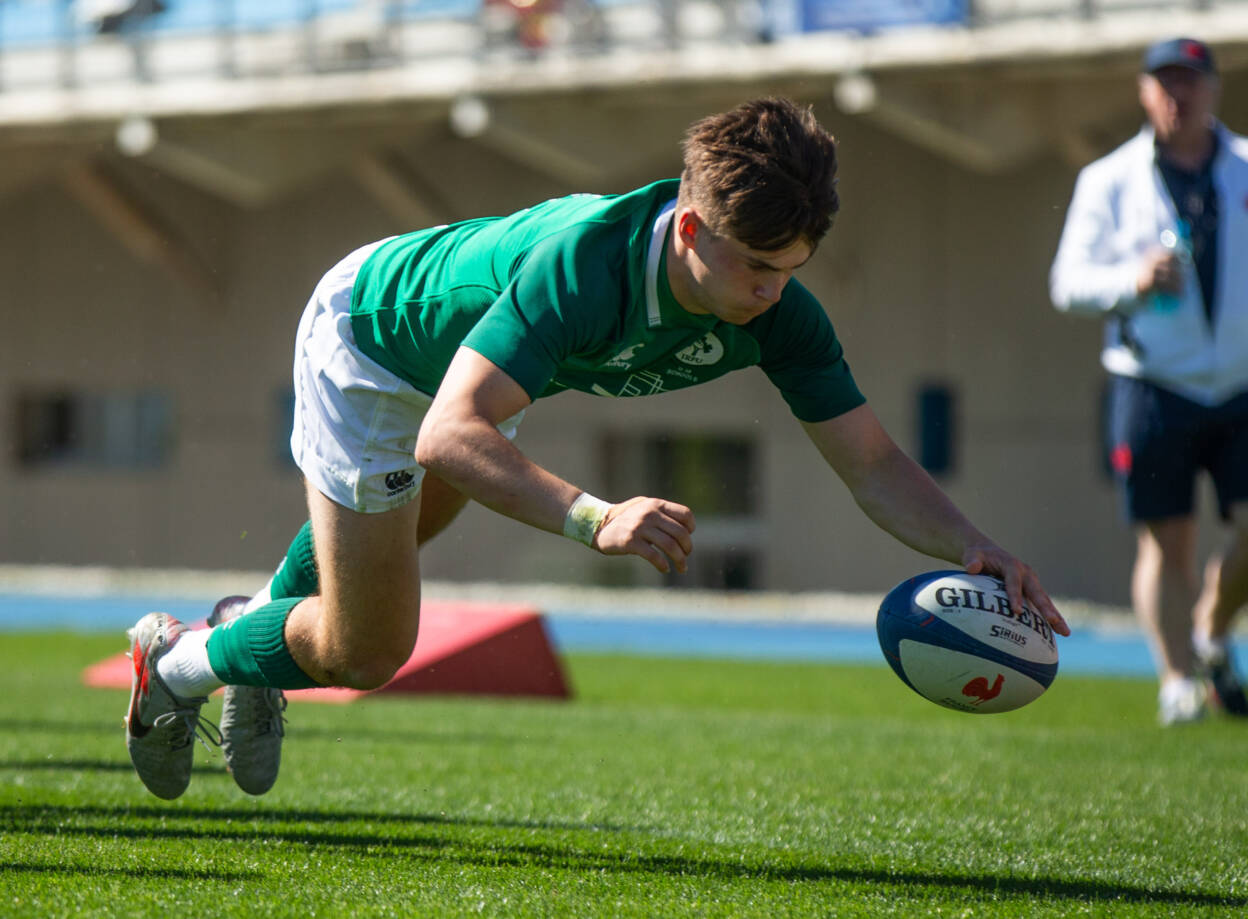 Prop Sparrow drove up close from the penalty before O’Riordan’s speedy pass sent Berman over wide on the left with 25 minutes on the clock. Out-half Murphy drew over the conversion with aplomb.

A brilliant run from the restart by O’Connell quickly brought Ireland back into the Italian half, but the Azzurrini defended well with seven forwards, blindside Valerio Siciliano earning a turnover penalty close to his own line. 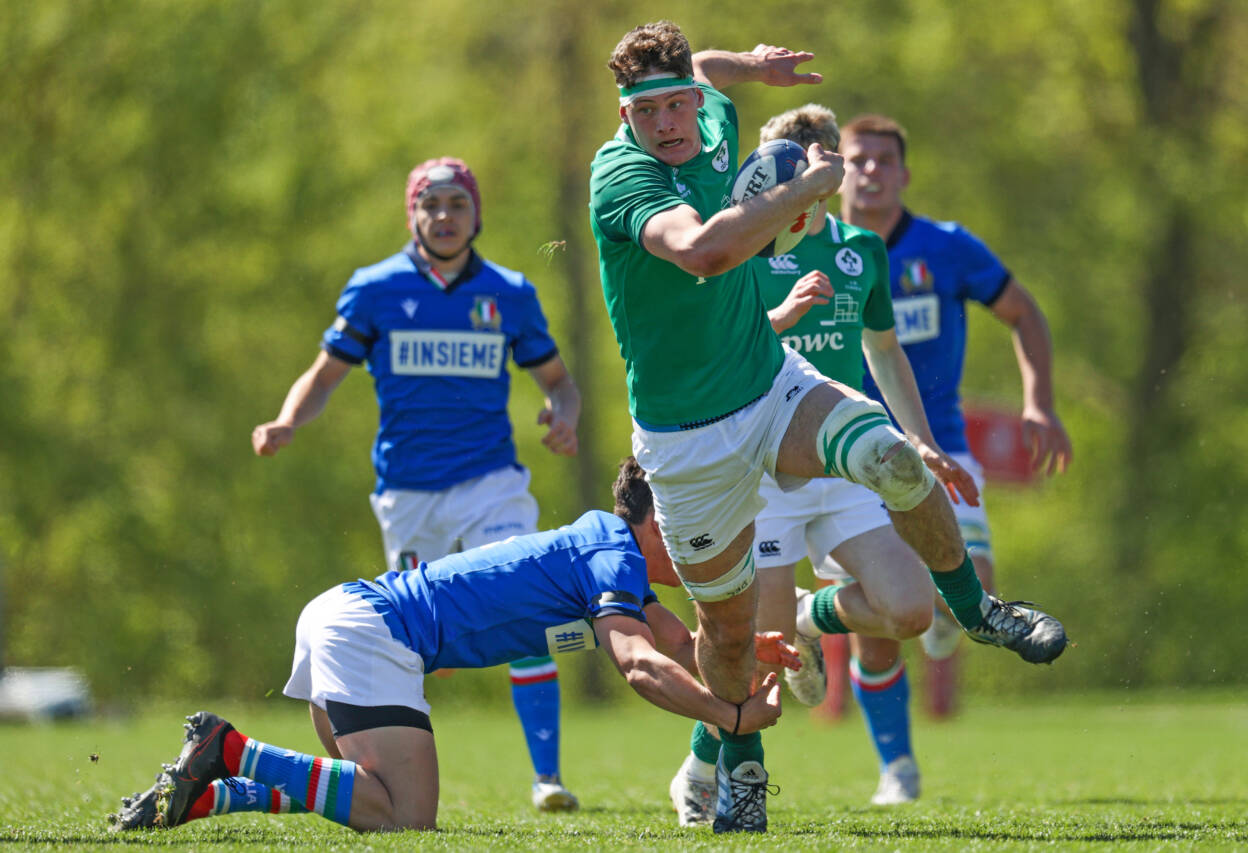 Lorenzo Elettri threatened with a break out to the left, but Smyth was quickest to the breakdown a few phases later. Italy were duly stung with a try past the 35-minute mark, McLaughlin darting clear from deep and Murphy’s perfectly-timed return pass put the winger in behind the posts.

Murphy converted to put 26 points between the sides, but two overcooked kicks from the Pres Bray youngster, coupled with an Italian scrum penalty, saw Roberto Santamaria’s charges grow into the game on the resumption.

Although O’Connell thwarted them at the breakdown again, Italy got back into scoring range with strong running from Sodo Migliori and Padoan. They worked the ball out to the right where centre Bozzo evaded a couple of tackles for a well-taken 47th-minute try.

With 17 minutes remaining, Italy had cut the gap back to 12 points thanks to Zucconi’s try, set up by fellow replacement Lorenzo Nanni and converted by Giovanni Cinquegrani. 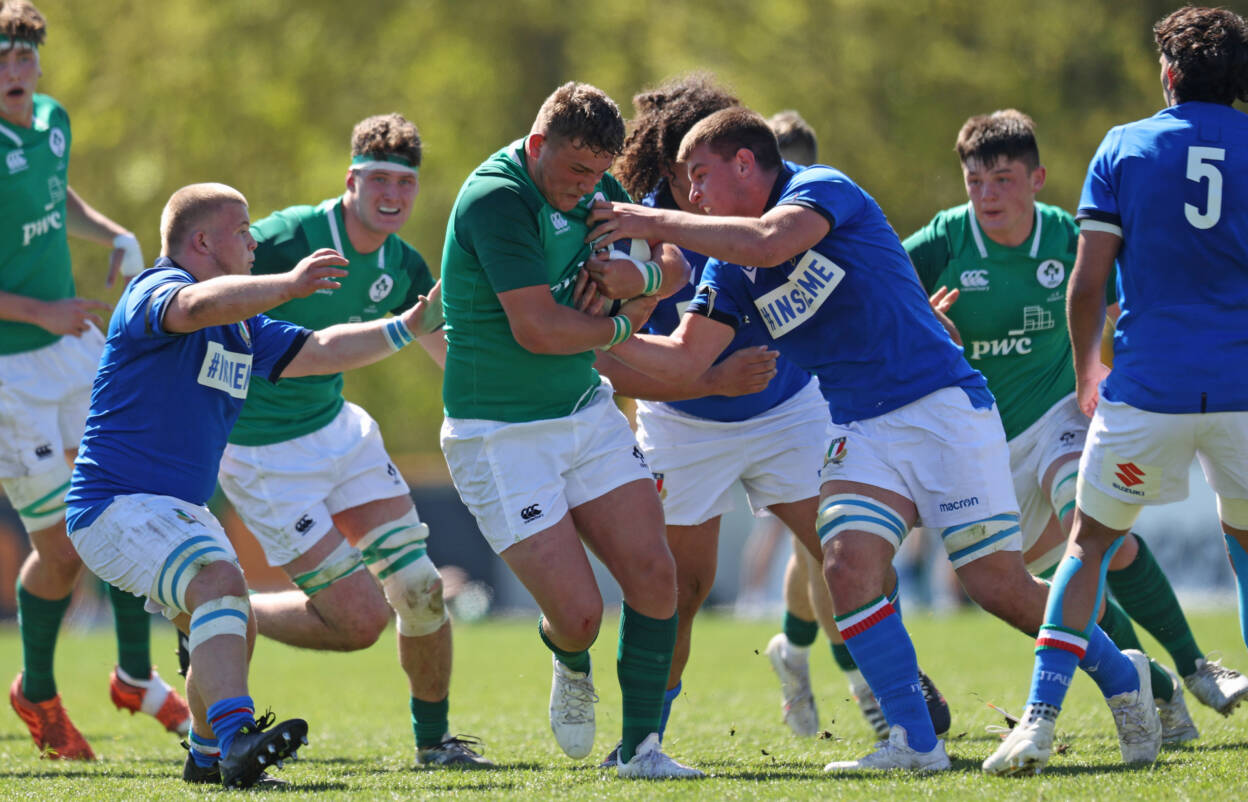 It was a tricky spell for Ireland to negotiate, with Italy’s tails up as they forced a couple of penalties in defence. In response, an opportunist score settled the issue on the hour mark as the Irish bench provided impact.

Oliver Coffey’s box kick was misjudged by Cinquegrani, Inigo Cruise O’Brien swooped on the bouncing ball and charged up to the Italian 22 where he offloaded for Long to finish off. Naughton added the extras.

Ireland’s forwards finally got in on the act right at the death. O’Connell won another penalty at the breakdown and set up a lineout drive which saw Sheahan break off to power over for his second try of the festival. Naughton made it a 26-point winning margin. 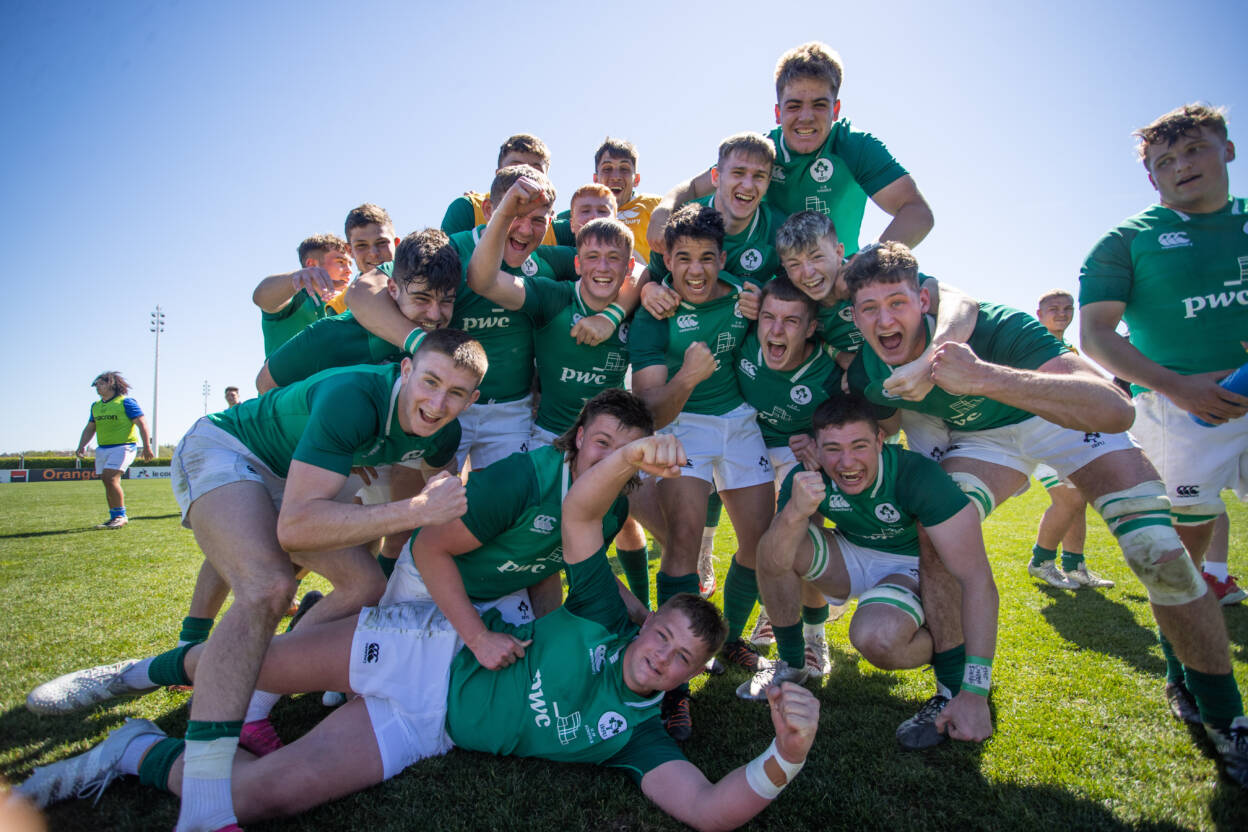