The Ireland Under-18 Schools team, sponsored by PwC, produced a four-try second half performance to register an encouraging 46-26 win over Wales in Marcoussis.

Paul Barr’s charges opened their win account at the U-18 Men’s Six Nations Festival, with Jack Murphy, captain Sam Berman, Hugo McLaughlin and Luke Kritzinger all crossing between the 48th and 67th minutes.

Ireland led 20-19 at half-time with Sean Naughton kicking 10 points and Stephen Smyth and Danny Sheahan scoring tries. A late Jonny Green effort brought Wales back to within a point.

However, Barr’s well-drilled side shored up their defence after the break and took their chances well, including two intercept efforts from replacement out-half Murphy and busy winger McLaughlin. 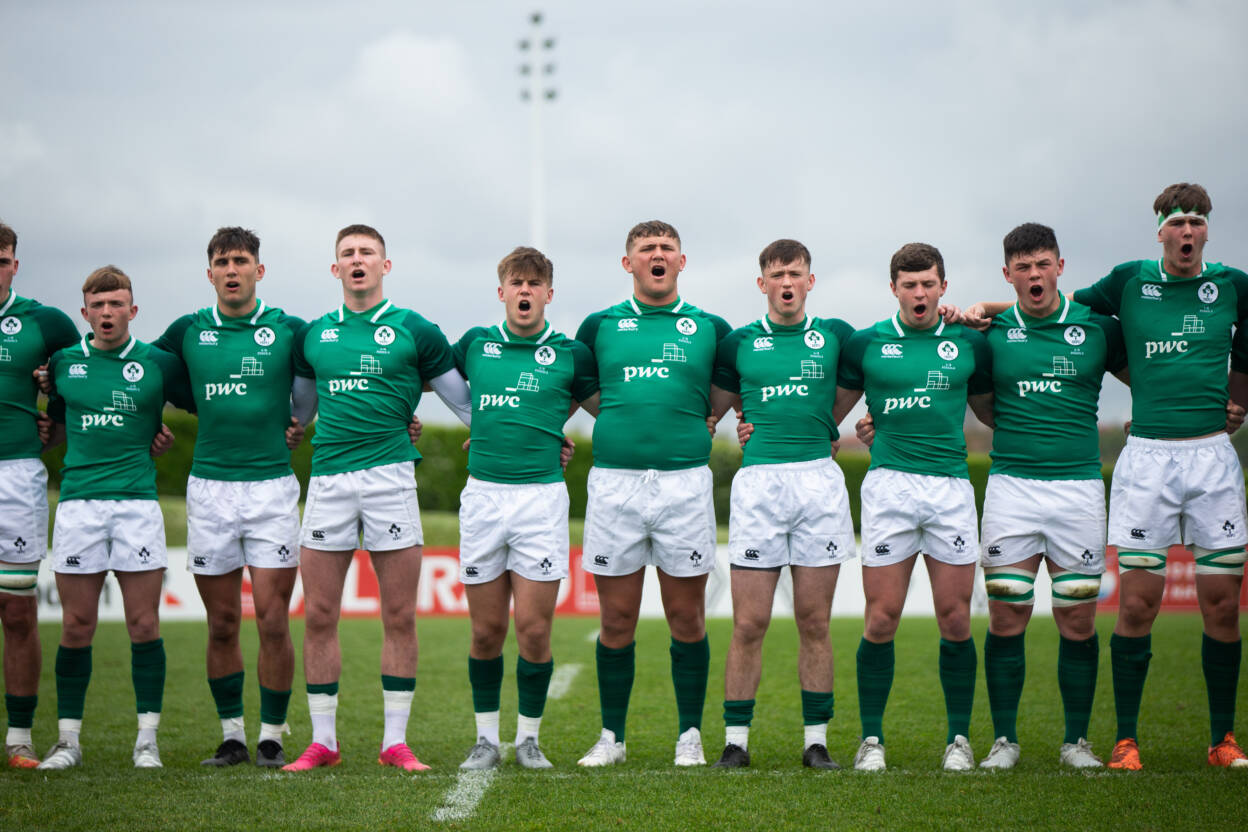 An Ireland team showing nine changes from their defeat to France got off to a flying start. Campbell College’s Joe Hopes latched onto a breaking ball from the kick-off and they built for a try inside the opening two minutes.

Hooker Danny Sheahan was particularly prominent as a carrier and he went close from a quick tap, before Kilkenny College’s Smyth successfully burrowed over with number 8 Jacob Sheahan on the latch. Naughton made it the full seven points.

Two scrum penalties gave a further boost to the Irish pack, and then a thumping long-range penalty goal from Naughton extended the early lead out to 10 points.

Wales hit back in the 13th minute, their forwards getting over the gain-line before Louie Hennessey sucked in two defenders and released full-back Huw Anderson to score to the right of the posts. 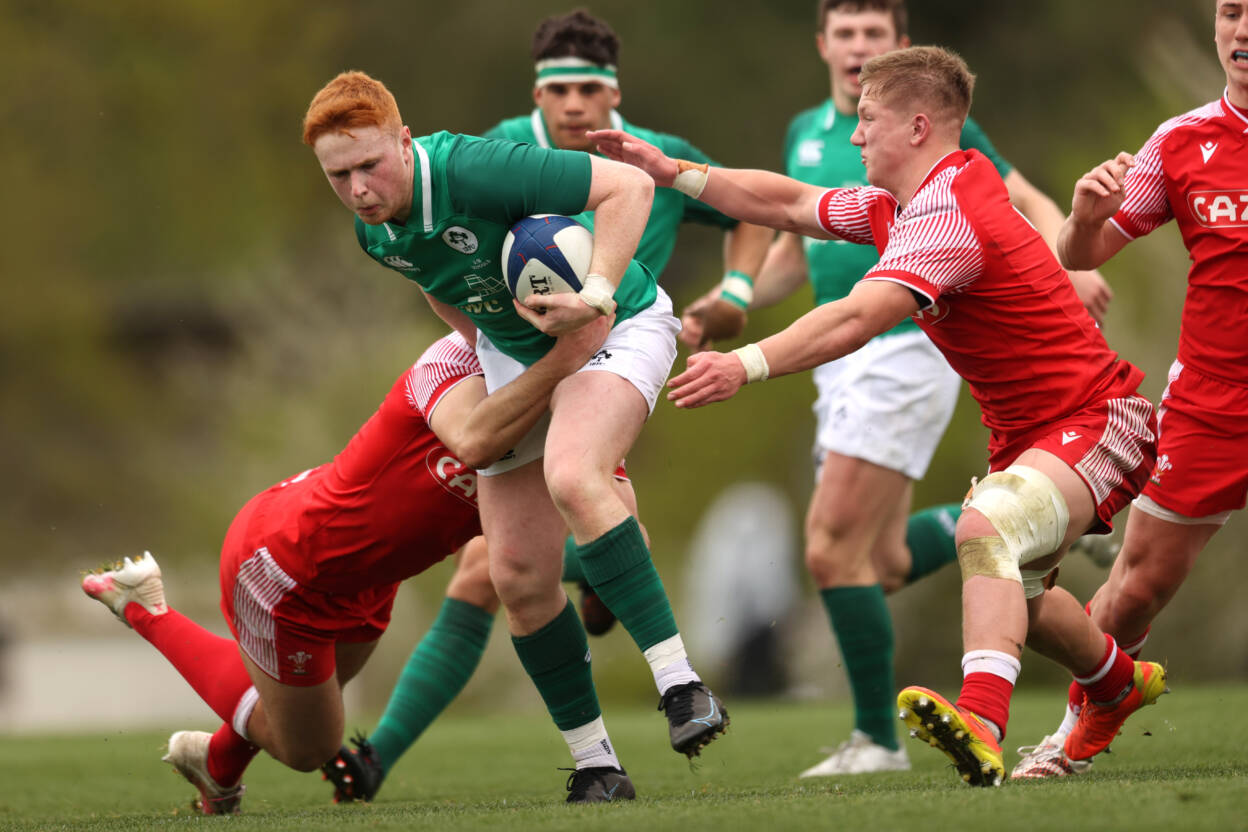 From the restart, Evan O’Connell forced a penalty at the breakdown and Ireland used the resulting lineout maul to drive front rower Sheahan over for a well-worked try, converted by Naughton.

Wales showed the quality of their own driving play when they replied in the 24th minute, their own hooker Isaac Young getting the grounding and this time Sam Berry was able to convert to cut the gap to 17-12.

McLaughlin’s rip in the tackle gave Ireland an immediate turnover, and although they gave away a penalty from their next attack, a strong set of carries kept Barr’s youngsters on the front foot.

A nice carry and offload from Danny Sheahan saw him release the supporting Oliver Coffey up into the Welsh 22, and with Ireland applying pressure, Wales number 8 Morgan Morse’s no-arms tackle on Naughton landed him in the sin bin.

Naughton sent the resulting 32nd-minute penalty through the posts, but 14-man Wales reached the interval with momentum thanks to a fine break by centre Hennessey and second row Green’s late converted try. 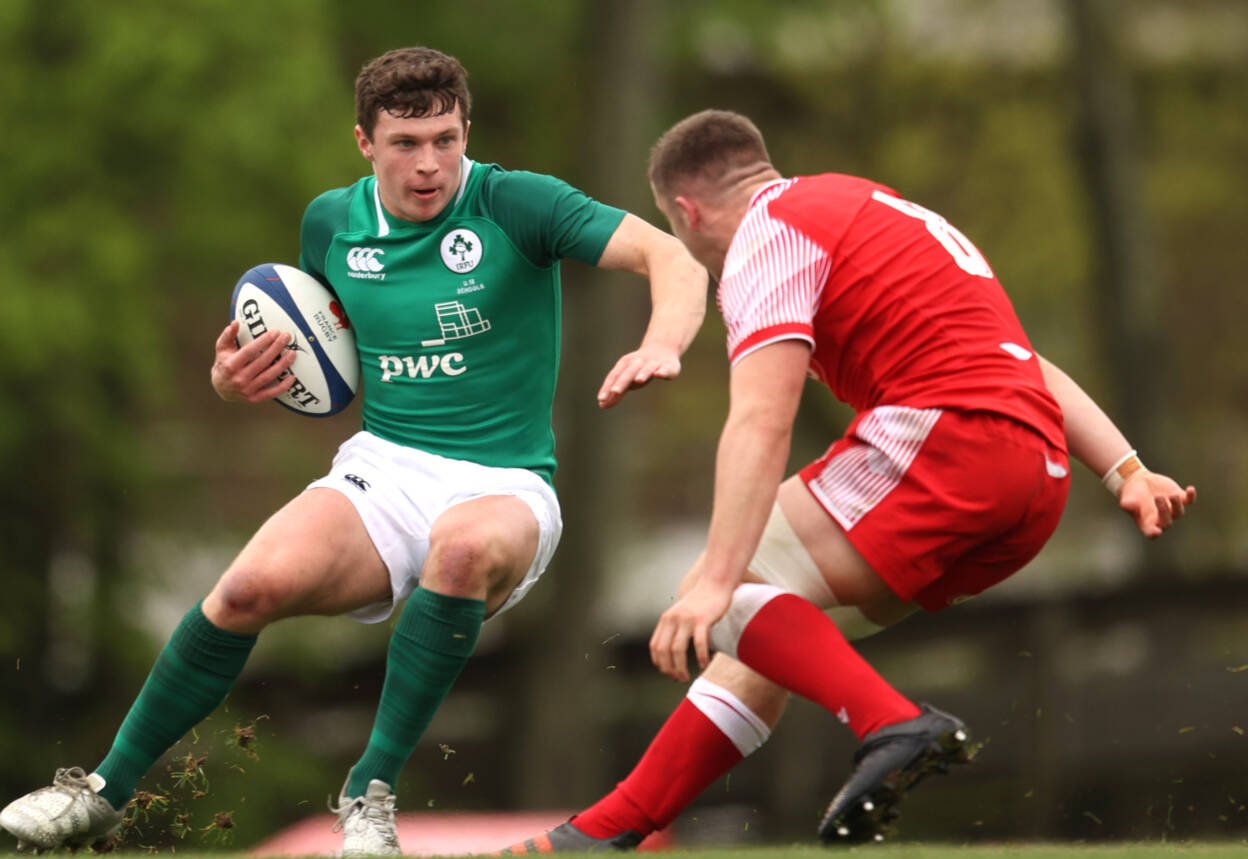 Ireland were first to threaten the try-line on the resumption, with an early surge seeing Inigo Cruise O’Brien held up brilliantly by Welsh winger Walker Price.

Further dogged defending from Wales kept Ireland out, and the deadlock was only broken when the newly-introduced Murphy intercepted a pass on halfway and raced in under the posts. He tapped over the conversion for a 27-19 scoreline.

Blackrock College centre Kritzinger’s classy offload out the back door, combined with a determined run by Stephen Kiely, soon had Ireland knocking on the door again. The hard-working Berman deservedly crashed over from a short Coffey pass.

After Murphy’s conversion, Hopes got his fingertips to a Welsh lineout as Matt O’Brien’s side looked to end their scoreless spell. They were undone by another interception when McLaughlin picked off Hennessey’s pass to scoot clear from outside the Irish 22.

The extras from Murphy widened the margin to 22 points (41-19), the gap eaten into by replacement Ioan Duggan’s try in the left corner after Ireland winger Kiely had carved open the defence with a fine chip-and-collect at the other end. 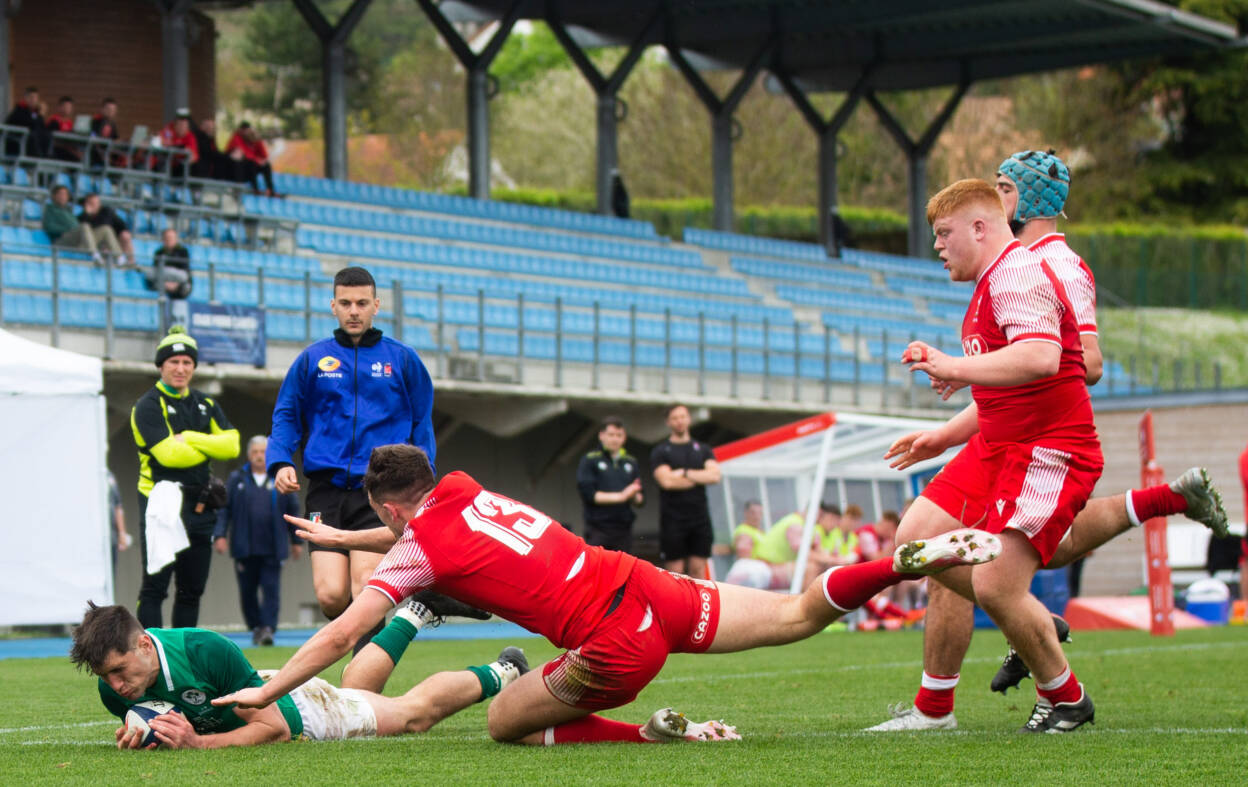 Nonetheless, there was still time for a sixth Irish try as Murphy’s quick hands in a slick skip pass put Kritzinger over in the right corner. McLaughlin and replacement Brian Gleeson combined to win a turnover penalty – and Kiely halted a last-ditch Welsh attack – to wrap up the result.

Ireland close out the festival with an Easter Sunday showdown with Italy (kick-off 11.30am local time/10.30am Irish time). The Italians lost 31-17 to Scotland on the opening day and were beaten 28-21 by England today. 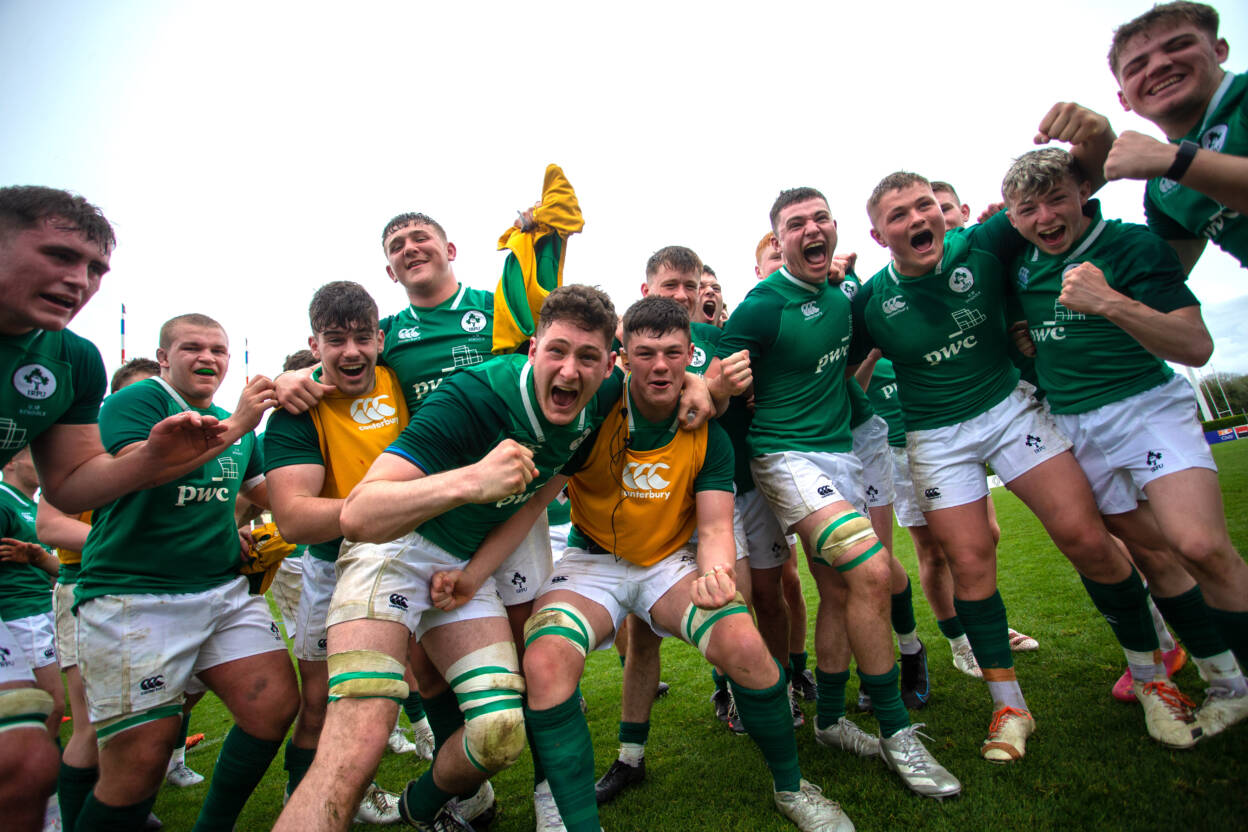