Fans are set to enjoy a greatly enhanced Women’s Six Nations in 2022 thanks to a massive increase in coverage on broadcast networks in Ireland, the UK and Italy, and a confirmed stand-alone slot in the calendar.

2022 will see all 15 matches broadcast on RTÉ and Virgin Media in Ireland, BBC in the UK, and Sky Italia for the Italian market. Details for France will be communicated in due course.

Matches will be shown on a mix of terrestrial and Player services with broadcasters across territories significantly increasing their commitment to the women’s game.

Changes to the Women’s Six Nations window in 2021 proved a major success with high viewing figures and increased digital engagement confirming that a new slot in the calendar can play a significant role in driving the growth of the women’s game.

The 2022 matches will also be played in a six-week window in late March and April, breaking the traditional link to the men’s calendar.

Scotland will open the Championship against 2021 champions England at DAM Health Stadium on Saturday, March 26, while Ireland, in Greg McWilliams’ first match at the helm, will take on Wales at the RDS on the same day. 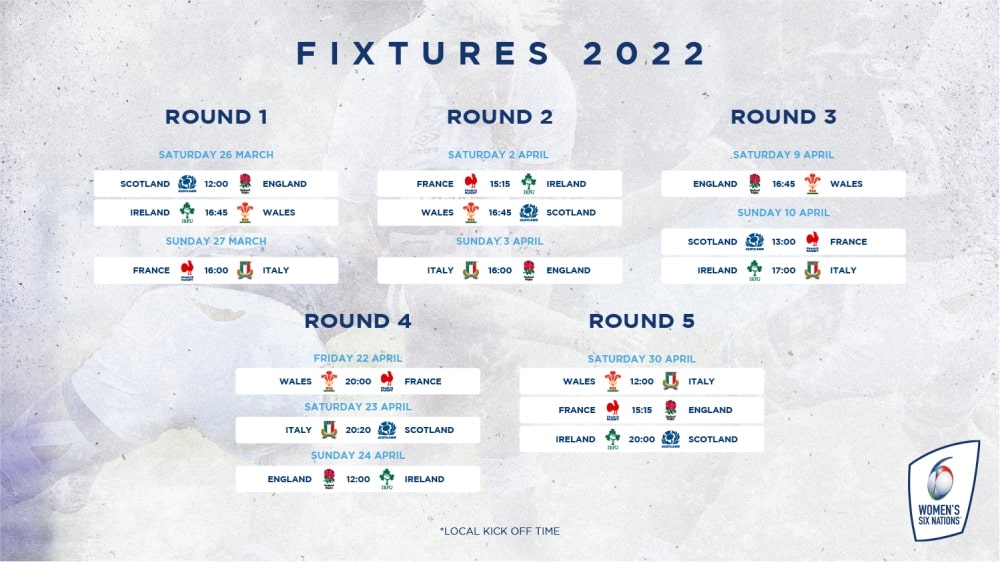 Wrapping up the first round clashes, France will face Italy at Stade des Alpes in Grenoble on Sunday, March 27.

The IRFU announced today that it will be easier for fans to support the Ireland Women’s team during the 2022 Championship with their three home fixtures to be played in Dublin, Cork, and Belfast.

Round two will take place on April 2-3 with Wales hosting Scotland at Cardiff Arms Park, while Ireland will travel to France on Saturday, April 2.  Meanwhile, England head to Italy for their game on Sunday, April 3.

The third round will see England host Wales on Saturday, April 9, with the other two matches taking place on Sunday, April 10 when Scotland entertain France and Italy will travel to Musgrave Park in Cork.

After a break weekend, round four will start on Friday, April 22 in Cardiff with Wales v France. Italy v Scotland will be on Saturday, April 23, and England will host McWilliams’ Ireland side on Sunday, April 24.

The Championship will end with a ‘Super Saturday’ – Wales v Italy, Ireland v Scotland (at the home of Ulster Rugby, Kingspan Stadium) and France v England all taking place on the same day.

Six Nations CEO Ben Morel commented: “Increased visibility is key for the growth of the women’s game. We are delighted to have enhanced broadcast partnerships in place along with a continuation of the dedicated window from which we saw such success last year.

“These two key developments, along with continued investment in many other areas including performance, commercial and marketing, will enhance the Women’s Six Nations for fans and players alike.”