Amid frenzied celebrations, the perfect snapshot. On the far side of Northampton’s Franklin’s Gardens, the small – but vocal – band of Ireland supporters congregated to acknowledge those in green. Their sons, their grandsons, their big brothers. Celebrating a memorable away victory with those who make it all possible. Even in a truncated Under-20 Six Nations campaign, this was a special moment they’ll always have.

Thomas Ahern is the first to admit his family aren’t steeped in rugby history, with Ardmore, the seaside village located near the Waterford-Cork border, being a GAA stronghold. The conversations around the dinner table previously dominated by talk of hurling, the Déise and Liam MacCarthy, rather than anything oval-ball related. But therein lies the allure of this story, and the beauty of that priceless family photo taken in Northampton a few short weeks ago. Dad, Anthony, and Mum, Jessie. Grandad Tom, and brother Jack and sister Katie. The Aherns.

“It was special having them there,” Thomas says. “The way we went over to England and won there was one of the highlights for us as a team but to have family in the crowd to share the moment with afterwards… My Grandad was able to come over as well. My Dad wouldn’t be the biggest rugby man but he has been the biggest influence on my career so far. He has always just told me to go for it, always supported me. It was an unbelievable moment to have them there and one I won’t forget.”

The photo will assuredly take pride of place on the mantelpiece in Ardmore, a prized moment in time to look back on in years to come with a smile. It was just one of a number of standout memories Ahern can reflect fondly on from his first experience of the Under-20 Six Nations in green. From watching on at Irish Independent Park last year, to being a star of Noel McNamara‘s class of 2020. That sliding finish in the far corner against Scotland on the opening night, to the towering performance in the win over Wales in Cork. Or his brace of tries in the bonus-point defeat of England in Round 3, and the embrace with family afterwards.

“It was kind of surreal,” the second row tells IrishRugby.ie. “To play in front of home crowds like that at Irish Independent Park and to pick up 10 points from 10 in the wins over Scotland and Wales was brilliant. It was just unbelievable having that support behind you. People you’ve never met before shouting you on and saying well done afterwards. You get this first taste of what professional rugby is like and you just want more.”

Unfortunately, circumstances halted Ireland’s drive for back-to-back Grand Slams at Under-20 level, with the home game against Italy and then the Round 5 fixture against France in Perpignan postponed amid the outbreak of Covid-19, thus denying McNamara’s charges the opportunity to build further momentum as a group. While bitterly disappointing, Ahern’s performances in the opening three games did provide enough evidence to further heighten the excitement around his potential and burgeoning career. 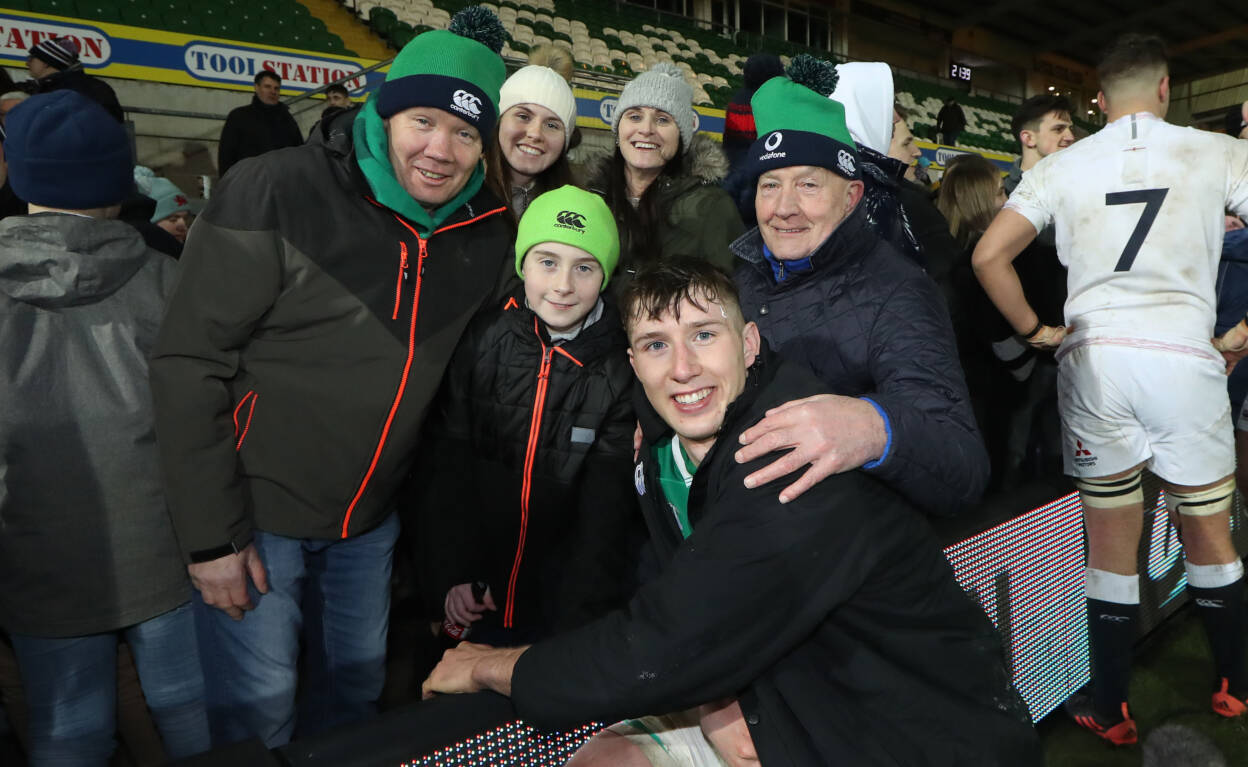 A key figure in Ireland’s lineout, the 19-year-old – who made his Under-20 debut at last year’s Under-20 World Championship in Argentina – demonstrated his leadership qualities throughout the campaign, and caught the eye with a number of dynamic and highly influential displays, no more so than in that win against England.

At six foot, nine inches, Ahern is a powerful weapon in the second row but his influence on the pitch extends far beyond the lineout, with his athleticism and excellent skillset strong features of the Waterford native’s game, as evidenced by the way he finished off a team move against Scotland. With eight Under-20 caps to his name, Ahern has been one of the standout talents in the programme this season and the maturity and capacity shown at the heart of an exciting team has brought his rapidly-rising reputation to new audiences.

“The coaches within the Under-20 set-up are top class and being in that environment for the last 10 months has brought my game on hugely,” he continues. “Noel, Colm Tucker and Kieran Campbell are superb at what they do and the whole programme really sets you up for taking that next step. I can’t emphasise how good the Under-20 set-up is enough and it has been brilliant to be involved in it.”

Now in his second year of the Munster Academy, Ahern’s journey to the professional game was through the club route, as he recalls those early days with the Youghal RFC minis. Hurling and Gaelic football always played a prominent role in his childhood and indeed Ahern played both sports up until the age of 16, as well as athletics, but by that stage his eyes had been opened to the possibilities of a career in rugby.

Ahern continued his development with Dungarvan RFC, the town in which he attended secondary school, and then latterly in the colours of Waterpark RFC before taking his first steps on the Munster underage ladder with the Easter Munster cadets.

“I’ve definitely got more of a hurling background, just being from Waterford and in school then there was so much focus on it,” he explains. “But I just had this thing for rugby and pretty much fell in love with it from at the age of nine in Youghal. I was also always relatively tall which helped and then when I was about 15, I just kind of shot up in height. I think I grew four inches one summer and then another three inches in the following six months.

“Before then I had played full-back as I was quite quick having done athletics and raced over 400 and 600 metres. But I came back to rugby after that summer I shot up and the coaches just said I was too tall for full-back and I had to move into the second row, which was obviously a challenge at first because it’s a completely different skillset.”

Although he swapped the number 15 on his back for the number five, Ahern’s talent was obvious for all to see. He worked diligently in learning the trade of his new position, going through reps after reps to familiarise himself with the art of lineout calling and jumping.

“It just required hours and hours of practice,” he says. The hard work paid off when Ahern made a big impression for the Munster Under-18 Club side who won the Inter-provincial title in 2017 and a year later, the teenager entered the southern province’s Academy system.

He continues: “I think it was that summer with the Munster U18 Club team that opened my eyes. I always wanted to play rugby but spending time training in the University of Limerick with that team four days a week gave me an insight into what a professional career would look like and I just loved it. We won the Inter-pros that year and with that taste of it, I just wanted to keep going. Keep working. As soon as I saw that and experienced it, I knew it was something I wanted to do for the rest of my life.” 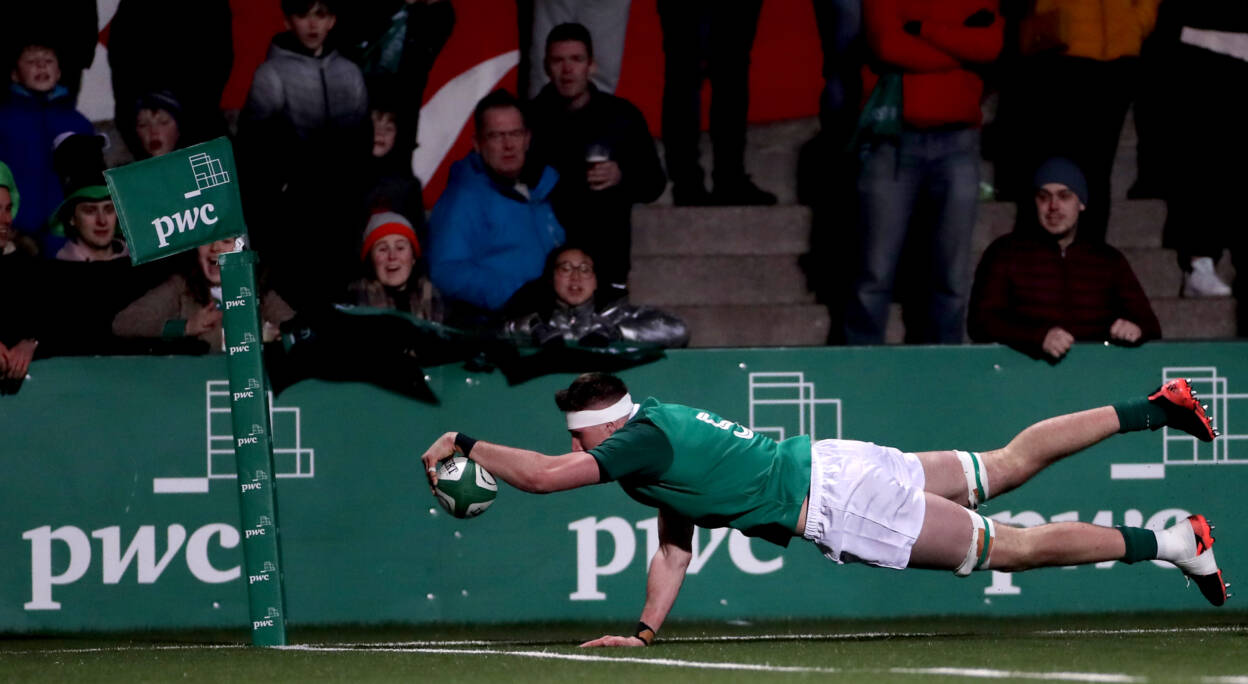 With a place in the Munster Academy came a move to Limerick and the start of a new chapter studying Food Science and Health in UL, while Ahern registered with Shannon RFC to get further exposure and experience in the Energia All-Ireland League.

Last summer, with Munster’s internationals away at the World Cup, the second row trained with Johann van Graan‘s senior squad and was rewarded with a couple of appearances for the province’s ‘A’ side, while he also made an appearance off the bench in the pre-season game against London Irish at Irish Independent Park. Training alongside the likes of Billy Holland, Darren O’Shea and Sean O’Connor on a daily basis was invaluable for Ahern as he continued to build his lineout qualities.

“Moving into the Academy was a huge step for me because I just wasn’t used to that level of training. It was a big wake-up call having to move away from home to Limerick but I’m loving it now. It’s a bit of dream come true, really. You grow up watching these guys on TV and then suddenly you’re in training with them and eating lunch with them. And the one thing over the last two years is that every single one of the players are so helpful.

“From a lineout perspective, I’ve been able to pick the brains of Billy Holland and just learn so much off him. I can grab him after a session and just ask him anything, whether it’s video analysis, lineout skills or just general advice. It has been a great experience so far and I’m really looking forward to getting back in that environment whenever time allows.”

Back home in Ardmore due to the enforced break from rugby, Ahern is using the time to concentrate on his studies while maintaining his fitness and conditioning by following a tailored programme prescribed to him by the Munster Academy Strength and Conditioning staff.

His experiences, both in green and red in recent months, have given Ahern a sense of what he can go on to achieve with the same level of application and hard work that has seen him develop through the club and underage structures in recent years to emerge as an exciting young talent for Ireland and Munster. The challenge now is to bide his time over this period and continue on that upward trajectory when rugby can safely resume.

“The last few weeks have been tough as we were on such a high and as a group, we knew we had a lot more to give in the Six Nations and at this summer’s Under-20 World Championship,” he adds. “But this time off has also allowed me to go back over the games and you’re just reminded what a brilliant experience it was. Those big nights at Irish Independent Park just gave all of us a brief taste of professional rugby and they were unreal.

“It has made my appetite to work hard and get to where I want to go even greater and hopefully there will be many more occasions like Cork and Northampton in the future.”