Jonathan Sexton has been named as the Ireland captain for the 2020 Guinness Six Nations Championship.

Johnny is the 106th player to captain Ireland and while he has assumed the role of captain on-field in the past he has only once previously been the run on captain for the national senior side against Russia at the Rugby World Cup in Japan.

Speaking to IrishRugby.ie, Johnny said: “First of all it’s a massive honour to be asked to do it and I obviously got a taste for it during the World Cup for that one game and I’ve done it in patches with Ireland in-game when either Rory or Pete have gone off in previous games.

“It’s something that I enjoy but ultimately it’s a huge honour the biggest honour of my career to be asked to do it and I’m really looking forward to it and looking forward to the challenges that are coming up and hopefully we can have a successful Six Nations now.”

Speaking about the Ireland get-together in December at the IRFU High Performance Centre in Blanchardstown, Johnny said: “It was great to get to know the new faces. Obviously I knew John Fogarty from Leinster very well, he’s a great character so it was good to meet him again and Mike Catt obviously meeting him for the first time.

“There was a very similar feel in terms of there was a lot of familiar faces but there was a lot of new faces in the playing group and we changed up where we’re training so it’s going to feel fresh and the levels of excitement were unbelievably high and we were only in there for a day really but we set our stall for what’s ahead, really looking forward to getting back in there and keep going.” 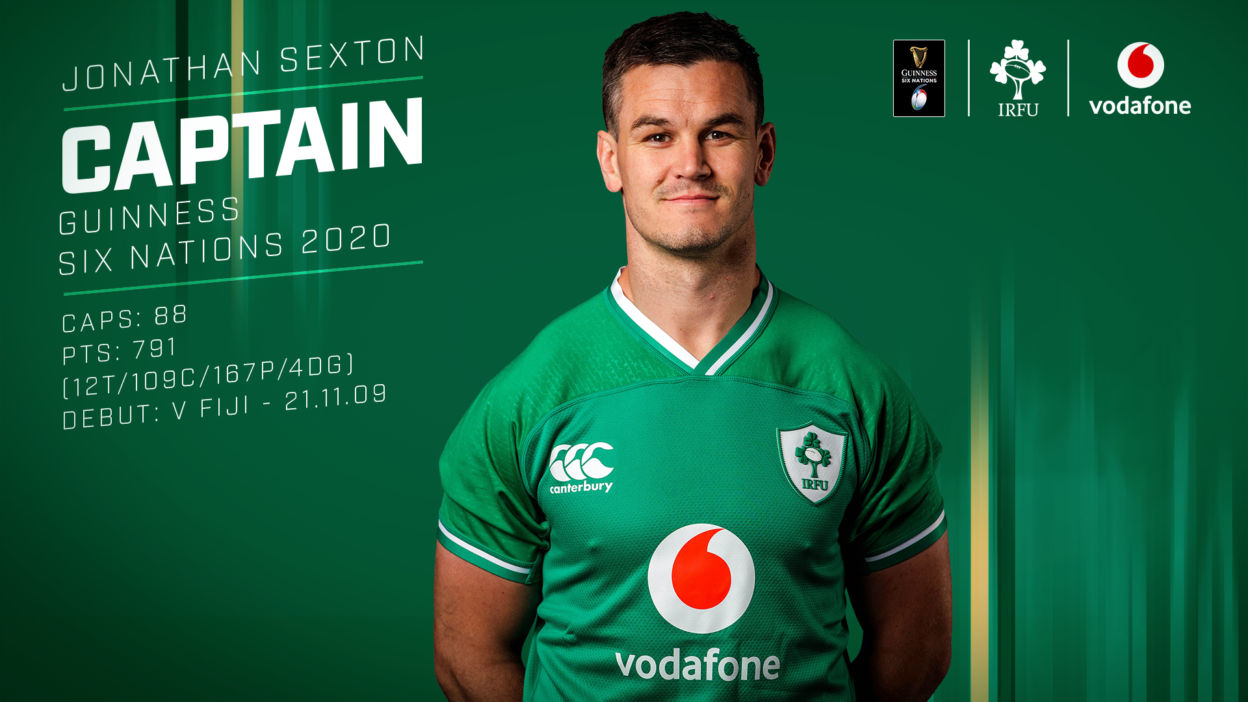 Looking ahead to the Six Nations, the Irish captain is feeling good as he prepares for his 11th Championship season: “It’s a massive championship really isn’t it. You get excited every year, you get nervous thinking about it. It is different you know, people talk about European rugby being close to international rugby but when you get onto those first international games the intensity, the expectation just goes up a gear.

It brings challenges but I’m looking forward to it now. In terms of my body I am feeling really good, I’ve obviously had a few weeks out with the knee but I am close to getting back to full training this week and hopefully I’ll be fully ready to go next week and into the Six Nations.

To date, Johnny has earned 88 Ireland caps scoring 791 points making him the second highest points scorer in Irish rugby history. He made his Ireland debut against Fiji in November 2009 and played a central role in Ireland’s Six Nations successes in 2014 (5 starts/66pts) and 2015 (4 starts/58pts).

He started every game of Ireland’s 2018 Six Nations Grand Slam campaign scoring 44 points and was named World Rugby World Player of the Year later that season after playing a central role in securing a series win over Australia and a first home victory over New Zealand at the Aviva Stadium.

A two time British and Irish Lions tourist in both Australia in 2013 and New Zealand in 2017 he has played in six Tests for the Lions and a further eight tour games.

At Leinster, where he was appointed captain at the start of the 2018/19 season, Johnny has won four Heineken European Champions Cups, a Challenge Cup and four PRO12/14 titles. Johnny has made 163 appearances for Leinster scoring 1469 points.