Twelve months ago Deely was included in the extended Ireland Women’s Sevens squad for the 2021/22 season, her hard work in the shorter form of the game being rewarded with a Sevens international debut in Lisbon in June.

A talented footballer and a product of the IRFU Women’s Development Pathway, the Ballinasloe youngster has also made rapid strides in the 15s code, gaining valuable experience with Blackrock College in the Energia All-Ireland League.

Deely, who turns 22 in October, has more than grasped her opportunity on this historic summer tour of Japan. Called up as an injury replacement, she duly forced her way into the starting XV for the opening Test in Shizuoka.

Rewarding Greg McWilliams and Niamh Briggs’ confidence in her, she displayed her Sevens-honed pace to supply the assist for Aoife Doyle’s try and then profited from the same move to dart clear for a terrific solo score before the hour mark.

“I knew that gap was still open again, so we went with the same move and it worked out great in the end, it was brilliant,” full-back Deely said of her slickly-taken 56th-minute try.

“Everyone came running at me (to celebrate), I didn’t expect it at all. The whole team comes and hugs you, it’s an ecstatic feeling. It’s amazing.”

Given their strong build-up to the game, Deely had no doubt that Ireland would bounce back from conceding two early tries to the fast-starting Japanese side.

While disappointed to fall 15 points in arrears, McWilliams’ charges gradually worked their way back into contention, using their powerful pack to dictate play and the new caps also stepped up to the mark.

“I knew myself once we got the ball in attack we would get going,” admitted Deely, who made history in 2018, alongside Béibhinn Parsons and Aoibheann Reilly, by guiding Connacht to their first ever U-18 Interprovincial title.

“It was a case of when that would happen, it did take us 10 or 15 minutes to get the ball and actually show what our attack was about.

“What I was really proud of was that we turned around and didn’t get our heads down. I think, especially with such a new group, and new caps, we were thinking we really had to step up, and I think we did really well.” 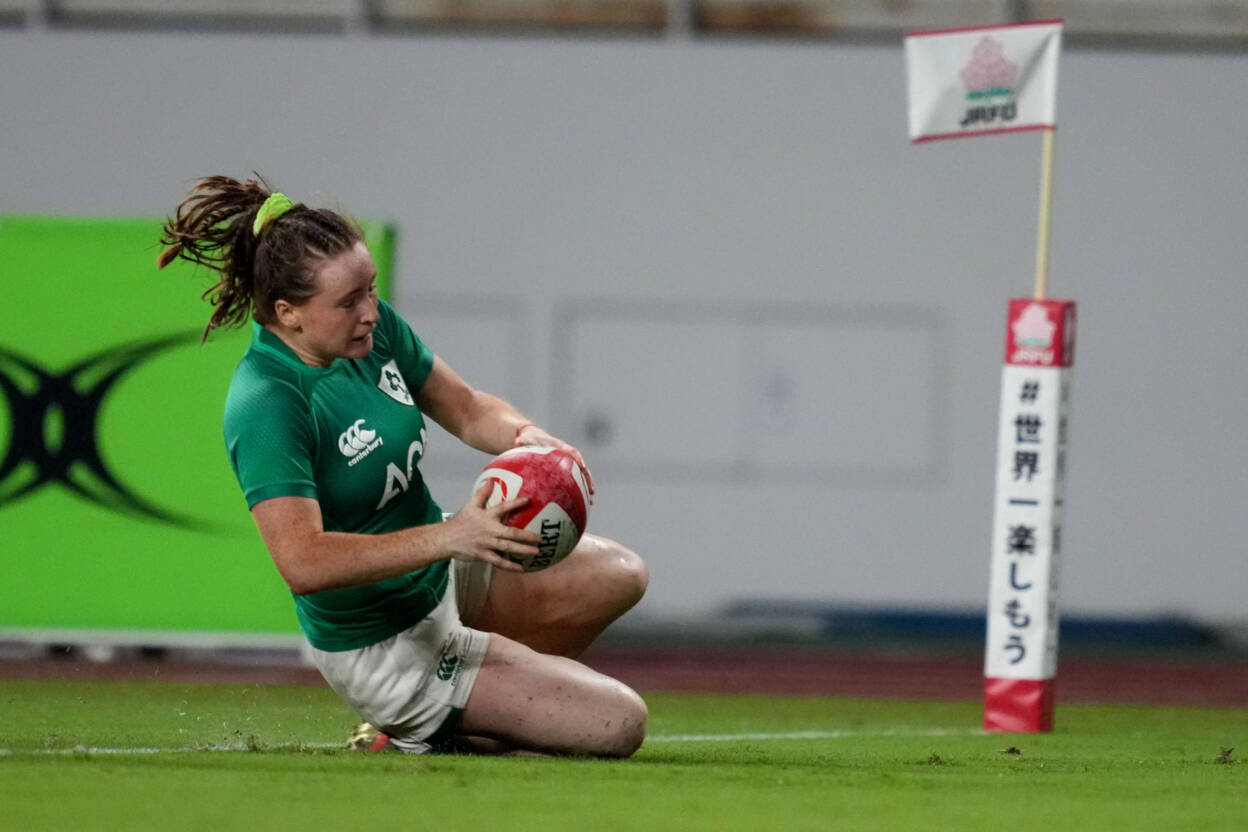 Ireland’s tails were certainly up after putting together those first two tries, the maul beating what proved to be a familiar path to the line for hooker Neve Jones who became only the fourth Irish woman to score a hat-trick at Test level.

Encouragingly, the girls in green continued to create chances and take them during the second period, the bench keeping the standard of play and energy levels high as Ireland racked up their biggest score in over seven years.

Our set piece was going brilliantly, and the forwards were doing great and got the first try, and then once the backs got our hands on the ball we got a try. I think after that try we knew we had this.

“We went in ahead at half-time and were so confident. We knew we didn’t have it won, so we knew we had to keep going. From those first two tries we were on the up and I think we stayed there.”

Deely praised captain Nichola Fryday and Dorothy Wall, another of the dual internationals, for their leadership during that tricky opening spell when this experimental team might have wavered under the pressure.

Deely and Wall have come up together through the underage ranks with Ireland, winning both the Home Nations Sevens crown and European bronze four years ago. They were reunited last season, playing for a Blackrock side that reached the AIL final.

“Us new girls really looked up to the likes of Dorothy  and Nichola Fryday to get a push-on. They said themselves we had been in this position before.

“They really showed a lot of resilience and we just followed in their footsteps. That’s what let us keep going and we did really well, the whole team. They gave us so much confidence.” 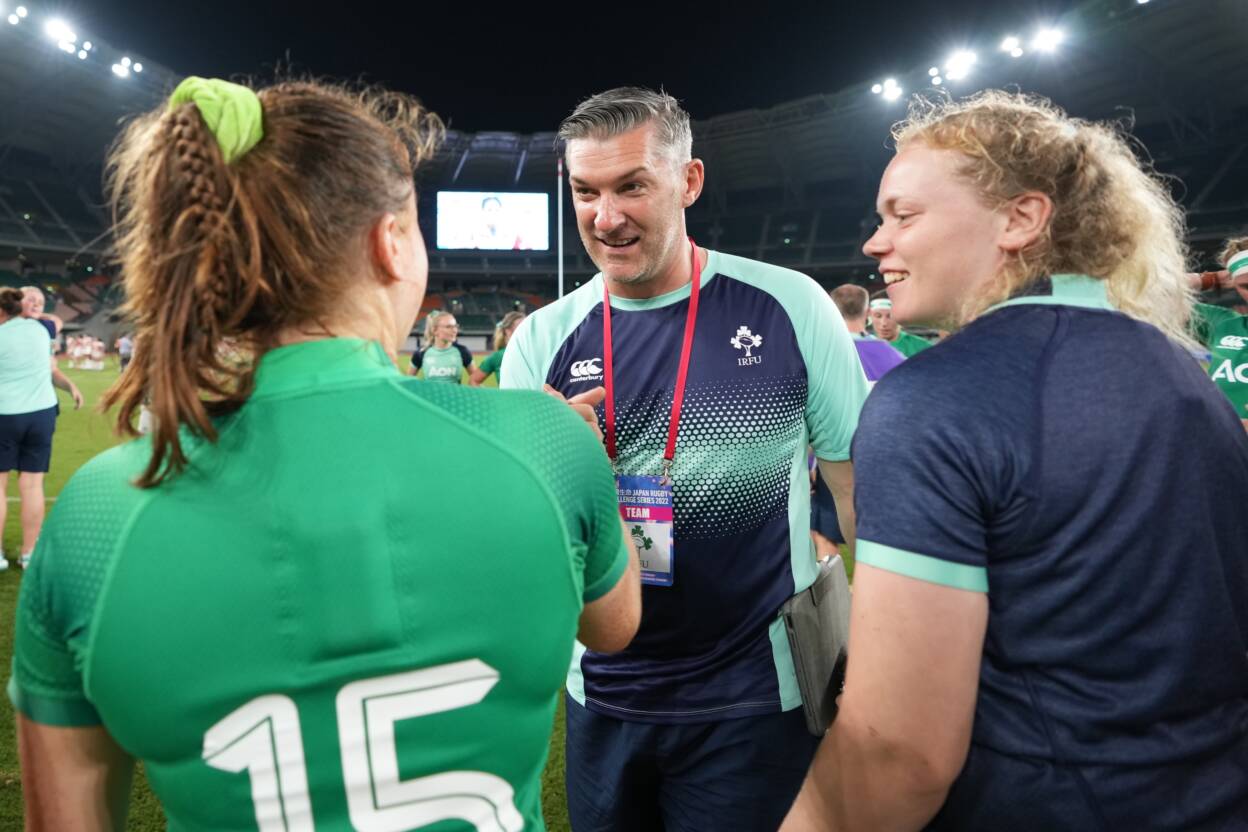 Making her 15s international bow was admittedly not as daunting a prospect for the Galway native given the familiar faces around her in that new-look back-line.

McWilliams’ selection was made of bright young prospects and players keen to add to their relatively small caps haul, along with the experienced quartet of Fryday, Linda Djougang, Edel McMahon and Nicole Cronin who had 88 caps between them.

“I didn’t feel like there was much pressure on us, and especially with Aoife Dalton and Natasja (Behan), us being 13-14-15,” explained Deely.

“I’ve known them for quite a while and have played a lot of Sevens and club rugby with them both. They weren’t new to me. I’ve played club with Natasja for the last two years, and then we all played Sevens for a while.

“It was easy to go with them, same with Enya (Breen), I’ve played with her since I was underage. Even though we were a new group we had a lot of experience together.”

She added: “I think Greg just gave us so much confidence, and that really helped because I knew there wasn’t much pressure on me. Same with Niamh Briggs, it was just nice to have that backing.

“The only people who were new to me were Dannah (O’Brien), Ailsa (Hughes) and Aoife Doyle on the wing, but we came together really well. There is a real connection in the group with the older and younger girls.

“Everyone gets on so well and the more experienced girls have accepted the new girls in and given us so much backing and so much confidence to go out there and play, and that really made the difference.”