With six new caps and nine players aged between 18 and 23 in the squad, the Ireland Women showed plenty of character to come from 15 points down and register a 57-22 runaway win over Japan.

The Irish attack bared its teeth, amassing nine tries in the stifling Shizuoka heat with their lineout maul in particularly devastating form as it supplied a hat-trick of tries for in-form hooker Neve Jones.

It was also very pleasing to see a number of back-line moves lead to scores, as the excellent Enya Breen and Dannah O’Brien, making her debut at just 18, played key roles in teeing them up.

Asked about the new-look side’s lacklustre opening to the game, Ireland captain Nichola Fryday commented: “We started slowly, we didn’t have much possession and we said coming into this game that if you give this Japanese team ball, they will play and execute.

“We let them get on top of us and for us, then, we just had to take a step back and say, ‘Look, we’re playing in the wrong parts of the field, here. We’re not getting any possession, we’re giving away silly turnovers’.

“We had to regroup and it’s probably not something we have been able to do in the past. We were able to get more possession, play in the right areas and execute better.

“It wasn’t the start we wanted but we had the character to change plan and execute.”

Considering the experimental nature of much of the matchday 23 and the fact that Japan are deep in preparation for the Rugby World Cup, this was a hugely encouraging way for Ireland to kick off their first ever summer tour.

Their time spent together at the IRFU High Performance Centre this summer, combined with a solid week’s build-up since arrival, helped them to go on to dominate the second half when they outscored Japan by six tries to one.

Fryday, who was a central figure as the Irish pack got on top, is expecting a tighter encounter in next Saturday’s series decider in Tokyo, with Japan likely to sharpen up their defence and improve their discipline. 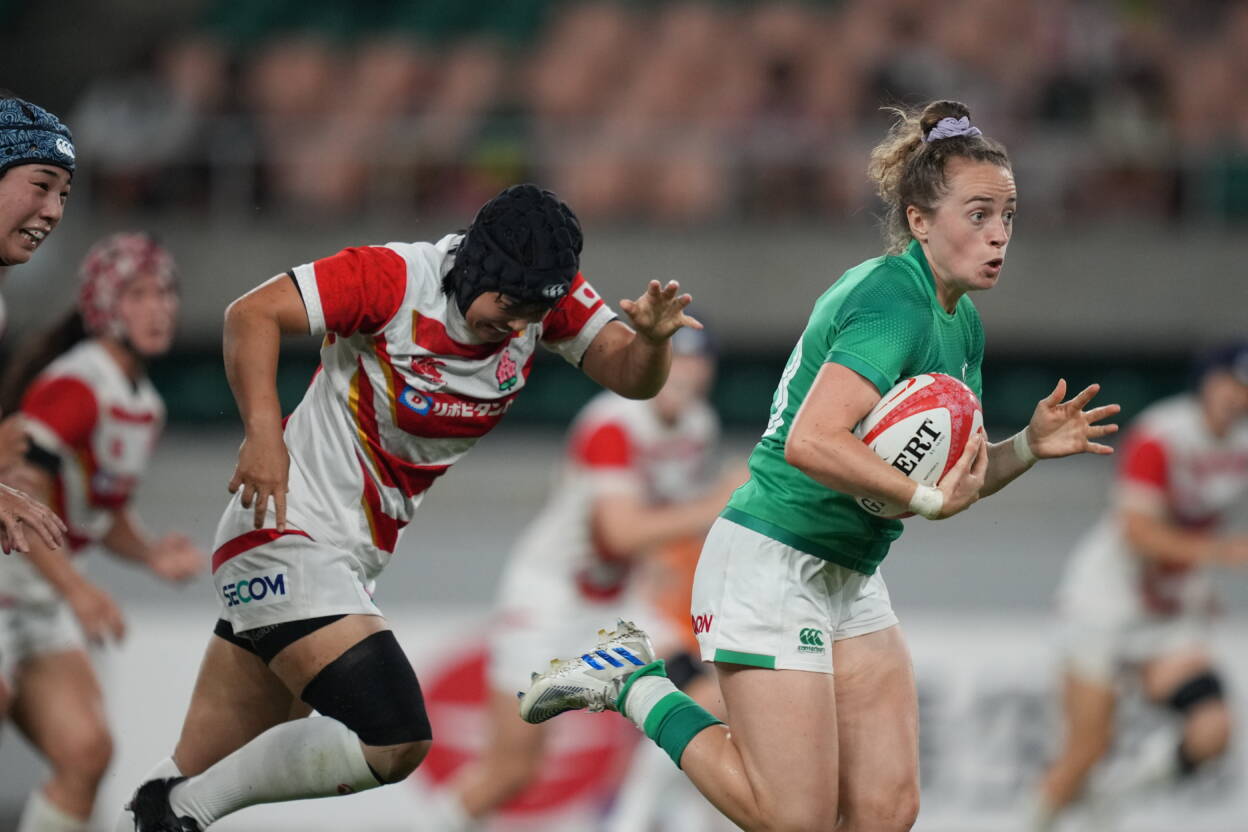 “It was a really tough game. I know the scoreline mightn’t reflect it,” said the Offaly woman, who was winning her 28th cap and captaining her country for the sixth time.

The Japanese were really physical, their skillset is outstanding. They’re so quick at passing the ball to the edges and we knew that if we let them into the game they would really shine.

“So, we’re really looking forward to the second Test next week because we know it’s going to be a really good contest.”

The Carlow teenager plays with a poise and maturity beyond her years, the many nights spent practising her goal-kicking at Tullow Rugby Club standing to her as she split the posts last night under the watchful eye of Ireland great and current assistant coach Niamh Briggs.

O’Brien also displayed her distribution skills in dovetailing well with Ailsa Hughes and Breen either side of her, while one of the moments of the match was her cross-field kick that Natasja Behan, another player making her debut, gathered on the bounce.

🗣️ "It's something I've been dreaming of all my life."

While happy with the winning start to her Test career, Ireland’s latest number 10 knows she has plenty of hard work ahead of her if she wants to repeat those joyous post-match scenes from Ecopa Stadium.

“It was unbelievable (to make my debut for Ireland),” admitted O’Brien, speaking afterwards to Irish Rugby TV. “Something I’ve been dreaming off all my life. For it to happen on a day like today is just unbelievable.

“I’m very thankful that it turned out to be a good result, but we’ve so much to work on. Can’t wait to get back to the grind and come again next week.”

An U-18 Interprovincial Championship winner with Leinster last year, O’Brien has been lapping up the experience of touring with a new-look Ireland squad that includes a number of her underage provincial colleagues. 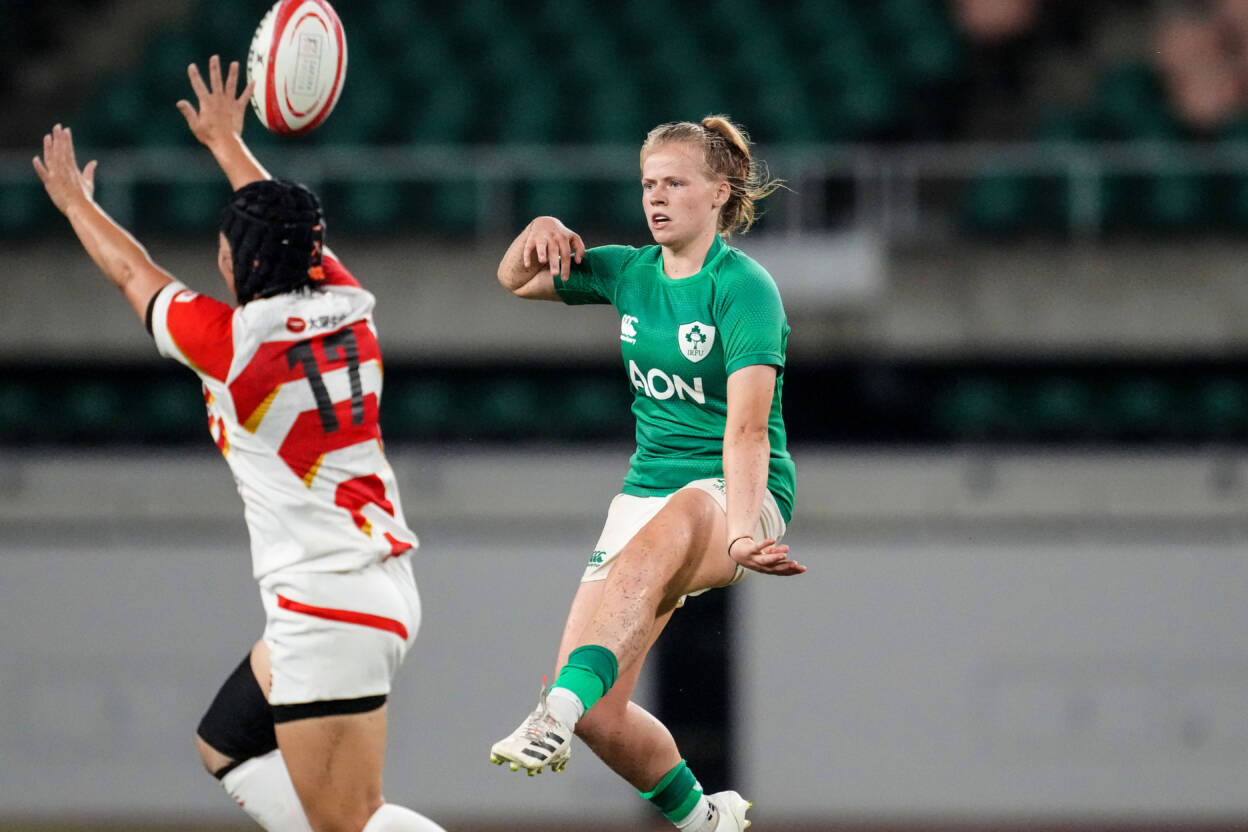 From the management team and senior leadership group down, she has been made to feel right at home in camp thanks to those quickly-formed bonds and the support available both on and off the pitch.

“It’s been ten out of ten. The girls are a different type of family. I thought I’d be missing home, but they’re just a family away from home. They’re an unbelievable group.

“There were definitely nerves at the start (of the game), but I grew into it. Obviously I’ve a lot of work-ons, but can’t wait to get back at it next week.”