Josh van der Flier and Tadhg Beirne were two of Ireland’s defensive lynchpins in New Zealand, the latter’s breakdown brilliance coming to the fore during a defiant late defensive stand on Saturday.

The third Test could have swung back in the All Blacks’ favour during the final quarter, but Beirne’s ability to steal crucial balls and lead a superb counter ruck that forced another turnover was huge for Ireland.

Coming on tour as the newly-crowned EPCR European Player of the Year, van der Flier further enhanced his reputation with a try in the deciding game as well as 62 tackles made and 73 ruck arrivals across the series.

He has been part of winning teams against New Zealand in Chicago and Dublin before, but to make history by winning the Test series in Aotearoa with back-to-back victories is on another level altogether.

“We spoke at the start of the tour, it’s the type of tour you want to be on – it doesn’t get much harder playing New Zealand in New Zealand. This was the goal coming out at the start.

“It looked ropey after the first week, but unbelievably proud of the group. We’ve had a really good month here and it was great to finish out with a performance like that. It feels incredible.”

Ireland’s self-belief never wavered despite an opening 42-19 defeat in Auckland, which could have derailed them in such a pressurised touring environment and at the end of a long, attritional season.

However, Andy Farrell’s men had learned from past lessons, particularly their Guinness Six Nations loss in Paris, and brought the series level before fulfilling their head coach’s hope with their best performance of the tour in Wellington.

“After the first Test it was pretty tough, but we knew we had it in us. We’ve played them a good few times and managed to get a few wins, put in a lot of great performances,” acknowledged van der Flier, who has scored six tries in 12 Tests since last July.

“One thing we’ve taken a lot of encouragement from is all the games we’ve lost, in the last year or two, have all been things we felt we didn’t performed as well as we could.

“We felt if we performed as well as we could we could be close, and we managed to get the series win. To be part of a history-making group like this is incredibly special.” 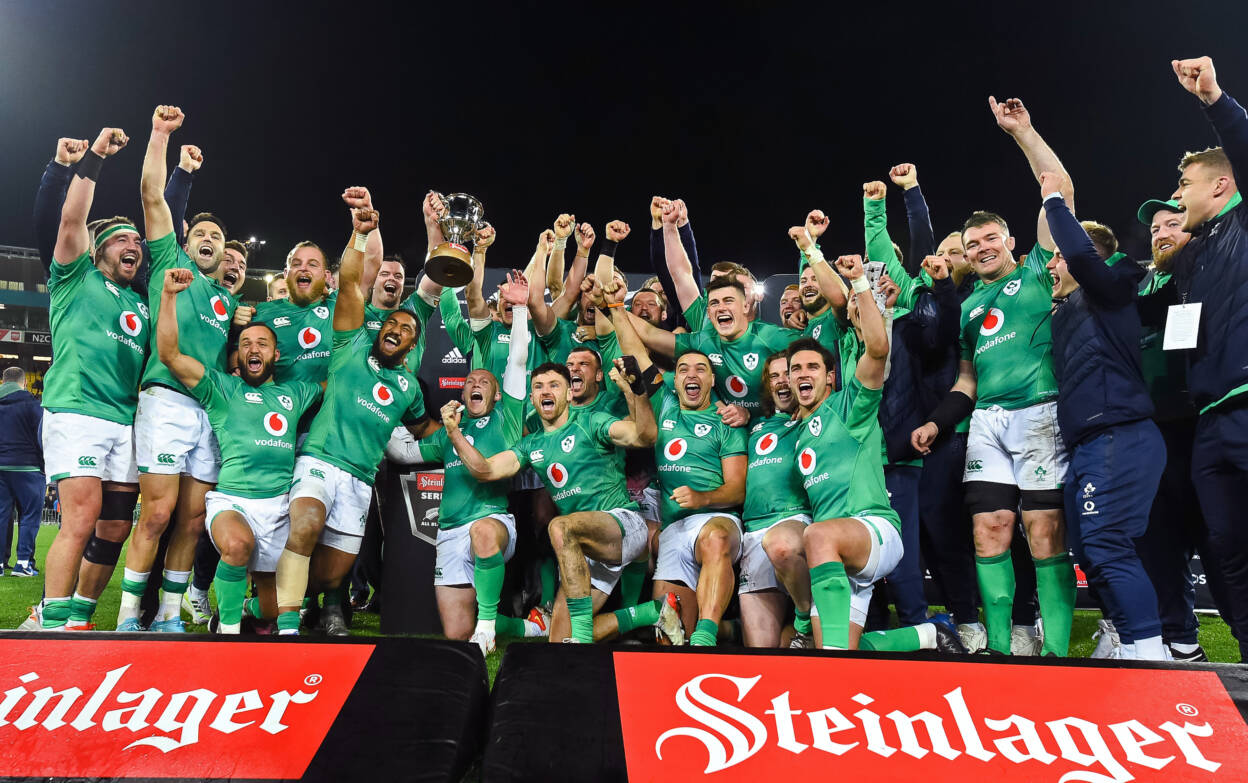 Meanwhile, Beirne was widely praised for his big plays during the series decider, carrying for 20 metres, making 16 tackles, his stellar breakdown work leading to turnovers and penalties, and he also won one lineout and stole another.

It was a real tour de force from the Kildare-born second row, a number of highlight-reel moments and crucial interventions preventing New Zealand from whittling it down to a one-score game in the final minutes.

The man himself, hitting top form at the tail-end of the tour after being sidelined with a thigh injury since March, modestly brushed off his influence at the breakdown and preferred to commend the collective defensive shift.

“I got one or two (turnovers) in the second half. It is just a part of my game that I need to bring to the team,” said Beirne, who earlier this year signed a new IRFU contract, taking him up to the summer of 2025.

“The most satisfying moment for me was inside the 22 and I made a tackle with ‘Murr’ (Conor Murray) and I got back up and I managed to turn it over and that was huge for us. That was just on a personal level. I was happy with that one.

“The defensive effort by everyone there in the last 10 minutes was incredible. The Doc (Ciaran Cosgrave) came up to me with five minutes to go and asked me how I was trucking and, to be honest, I said I was empty, but I would keep going.

“Realistically with ‘Treads’ (Kieran Treadwell) there, fresh legs would make all the difference. He came on and put in a massive hit in their 22 and it gave everyone a lift.

“I can’t put into words how proud I am of my team-mates. Everything the lads did in those last 50 minutes was incredible.” 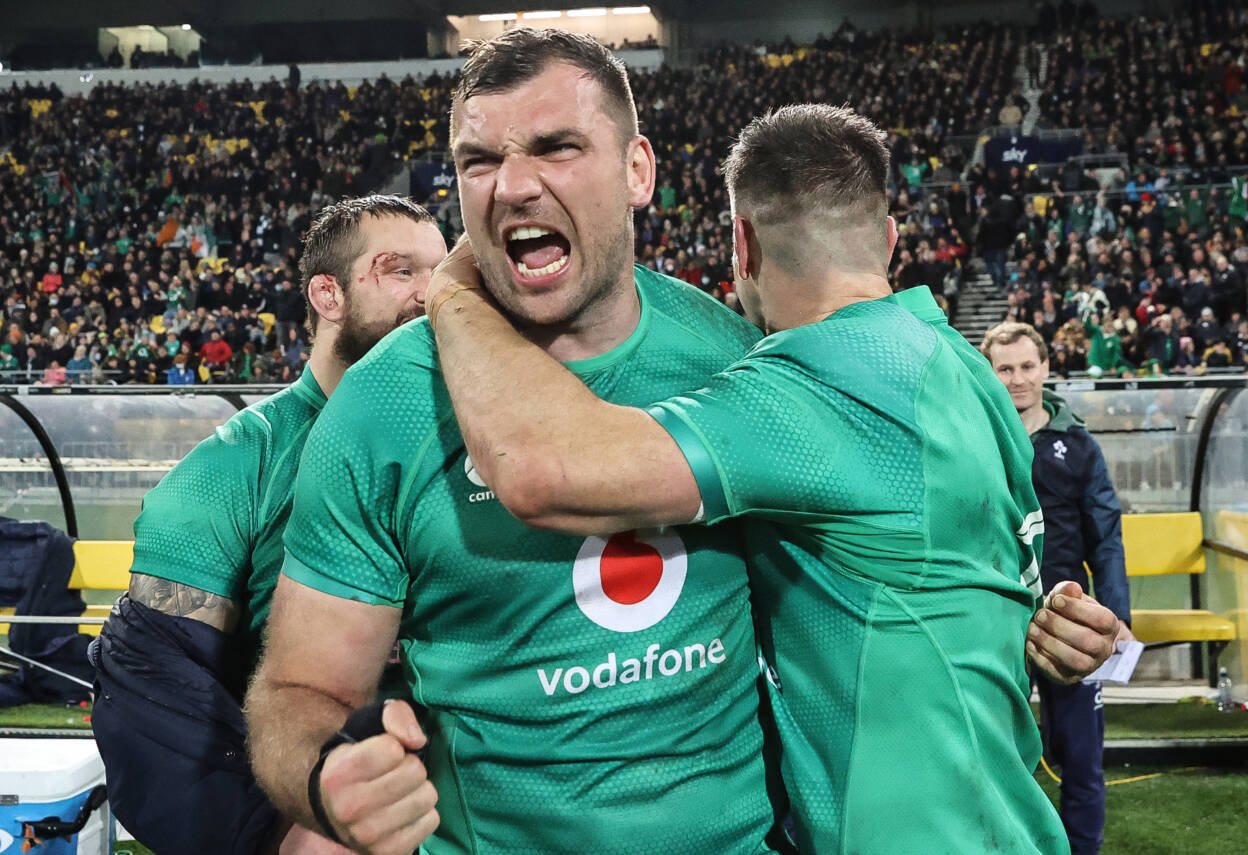 Giving an insight into the squad’s mentality heading down to New Zealand, Beirne had a good feeling about the tour from the outset and there was a quiet confidence that they could do something unique on the back of their recent Triple Crown win.

It was the Monday of the first day we were all in. We were in a room, we sat around and I think ‘Faz’ (Andy Farrell) put the challenge in front of us. He said we can make history by becoming the first team to win away in New Zealand.

“We won’t be satisfied with just that, we want to win the series. He put the question, did we believe? Everyone was pretty sure we did believe.

“It was something within the room. A lot of the time you can just feel it. You just know everyone is on the same page.”

Ireland’s first half display at the ‘Cake Tin’ will go down as one of their best of all-time, as high-quality tries from van der Flier, Hugo Keenan and Robbie Henshaw propelled them into a 22-3 lead.

It left the All Blacks with their biggest ever half-time deficit, and Beirne knew a backlash of sorts was coming. They are too good not to work their way back into the game, some individual brilliance from Ardie Savea, Akira Ioane and Will Jordan doing the trick.

In the past Ireland may have been rattled and come off second best, especially away from their Aviva Stadium fortress.

But, with the series on the line, they coolly scored from their next visit to the hosts’ 22 – replacement Rob Herring reaching over off a maul – and showed plenty of character to see out a famous result.

“This week was just about taking another step and in that first half, we probably showed that. We said at half-time they were going to come out and were going to come for us and they did. They upped it,” added the Munster forward.

“New Zealand put us under serious pressure at times and they got themselves back into the game from a scoreline that other teams wouldn’t have got back into.

“It is a credit to them and that’s what we knew was coming. We said they would have a purple patch and we said we would have to get through that and come out the other side and we did that.

“We went down to 14 for a while (with Andrew Porter’s yellow card), we conceded too. But the way we came out the other end of that was pretty positive.

“We went two scores ahead and then we just defended for our lives for a while. That shows the character of the team. We judge ourselves in defence as well. The last 10 to 15 minutes showed the spirit of this team, the character of us.”