Andrew Porter, a pivotal member of Ireland’s pack throughout the Test series, was blown away by how visible and vocal the Irish supporters were at Wellington’s Sky Stadium.

Ireland fans travelled from across New Zealand, Australia and Ireland, and even further afield, to watch history being made as Andy Farrell’s side secured a famous series victory by winning the third Test on a 32-22 scoreline.

Despite a terrific first half display that netted Ireland three tries and a 22-3 lead, they came under immense pressure during the closing 40 minutes which including prop Porter’s own sin-binning for a high tackle.

When he returned to the pitch, the All Blacks had closed the gap to 25-22 but Ireland’s response was swift. Going to the corner from a penalty, Ireland drove menacingly from the maul and Rob Herring broke off to score what proved to be the match-winning try.

The travelling support was in full voice from ‘Ireland’s Call’ through to a post-match rendition of ‘The Fields of Athenry’ and chants of ‘Ole, Ole, Ole, Ole!’, as the players paraded the Steinlager Series International Cup around the ground known as the ‘Cake Tin’.

Josh van der Flier felt it was akin to a home match such was a noise generated by those in green, while Porter acknowledged afterwards: “I couldn’t believe how many Irish supporters were out here, you could here them throughout the game.

“It was incredible, seeing all the green jerseys, Irish flags, seeing an Ulster flag right now, seeing how far people have travelled to come watch us. Our fans are everything to us.

“You’ll never meet a better fanbase with Irish rugby supporters. You’ll always hear them, we heard them today and last week and throughout the series.

“They mean an incredible amount, a driving force for us, and that’s who we’re playing for – we’re playing for our fans, our country, our families and everyone back home as well. A huge thank you to everyone who’s come out and supported us.” 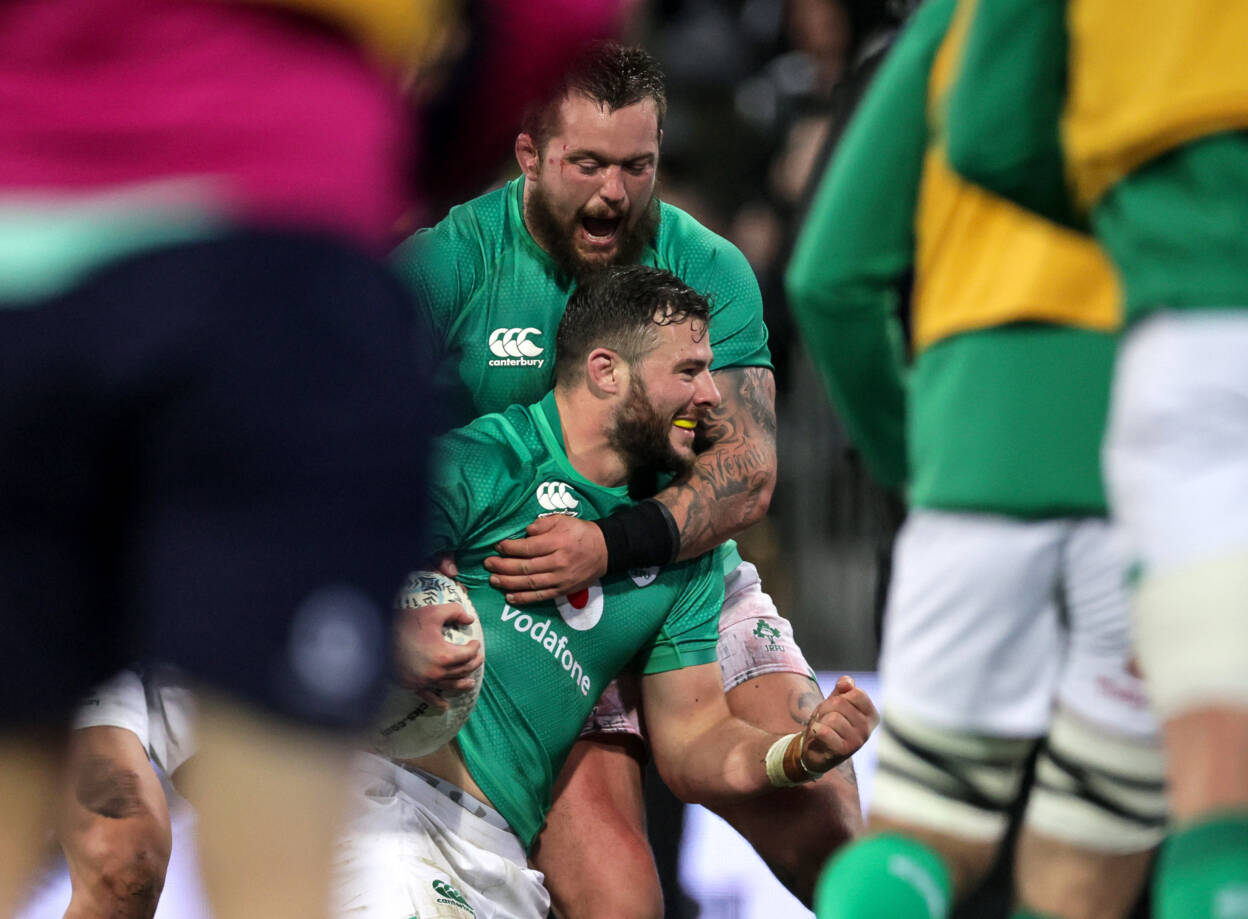 Porter understandably found it difficult to sum up the magnitude of beating the All Blacks in a Test series. He hopes the summer tour of 2022 will have a long-lasting impact on Irish rugby and those that dream of following in his footsteps.

“It’s unbelievably hard to put it into words how this feels. You spend your whole life growing up, seeing Ireland play against the All Blacks, and the results we had in the past.

“We came out with an intent to inspire the next generation, and hopefully we’ve done that today. It’s an incredibly emotional day, for myself, for this team, for my family as well that I’m representing.

The series started on a low note for the 26-year-old Dubliner, the 42-19 loss a disappointing outcome given how well Ireland had played at times. There was enough in the performance to give them added belief for round two in Dunedin.

So it proved, Porter helping to turn things around in the scrum and contributing tries at the start of each half. The brace took his international haul to five as he nears a half-century of caps.

History made, but with bodies and minds remarkably fresh at the end of the season and such a fast-paced tour, there was no stopping Farrell’s men as they became the first team in the professional era to win a series in New Zealand.

“100%, we weren’t happy with one Test victory,” he told RTÉ Sport’s Michael Corcoran. “We came out with the intent of having a good start today and we got that through the boys putting in an unbelievable shift.

“New Zealand came back hard in the second half, but it’s an amazing team and we held them off. Kudos to Johnny (Sexton) for slotting all them kicks in tough conditions with a noisy crowd as well. 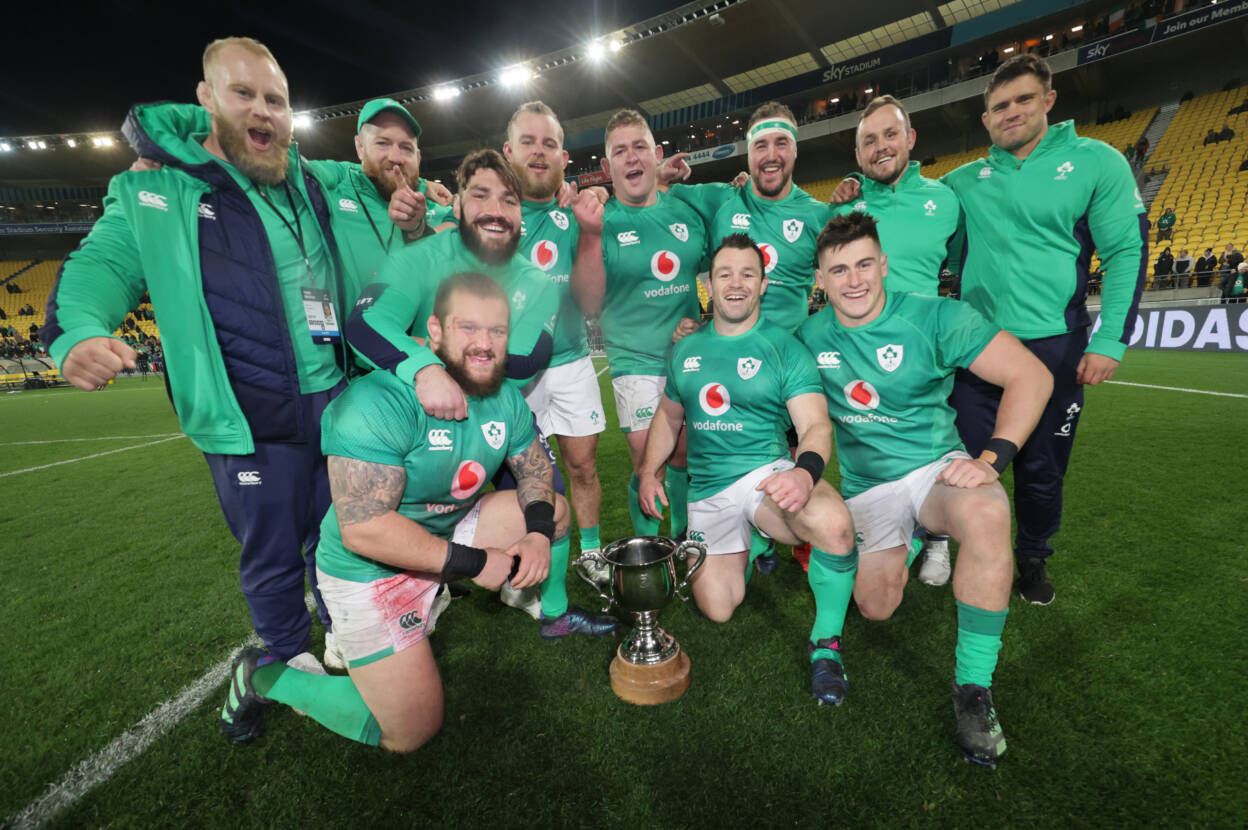 “We always know what the All Blacks are capable of. They’re an incredibly dangerous team, and they definitely put it up to us with that comeback.

“Like I said, we knew it was coming and we knew they were going to have their purple patches in the game, but we did incredibly well to hold them off at the end.”

The Leinster loosehead, who made 10 tackles and was central to a 100% return at scrum time and 88% in the lineouts,  added: “I can’t be more prouder than being part of this team and the amount of effort these boys have put in.

“Being together for four weeks over here, it’s incredible how far we’ve come in that four weeks.

“It’s been an awfully long season for a lot of boys, but it’s great to top it off now with that. We’ll see what comes in the future and the start of next season. It’s incredibly exciting now for Irish rugby.”