Ireland head coach Andy Farrell praised his players’ game control and calmness as they held their nerve to see out a landmark 23-12 win over New Zealand in Dunedin.

July 9, 2022 will always be a special date in Irish rugby history after Ireland ended their wait for a first ever victory over the All Blacks on New Zealand soil.

Including last week’s first Test in Auckland, there were 13 previous attempts to win in the Land of the Long White Cloud. The 1992 and 2012 teams went the closest, both falling to three-point defeats in the end.

The record books highlight just how monumental a result this was, with New Zealand’s first home defeat since 2018 also marking the first time they have lost in Dunedin since France won at Carisbrook in June 2009.

Ireland held New Zealand to their lowest points tally on home soil since the 2011 Rugby World Cup final, while only two other northern hemisphere teams have had bigger winning margins against the All Blacks in New Zealand – the British & Irish Lions in 1993 (20-7) and France in 1994 (22-8).

Asked what the victory means to him, Farrell replied: “It’s what it means to the group, it’s not what it means to me at all. We talk a lot about inspiring people back home, and these lads they keep turning up and knocking down doors.

“The most special thing about tonight is that no other Irish side will get the chance to do that again, will they?

“We talk a lot about not just about beating New Zealand in New Zealand for the first time, but there’s a series to be won. We’ve earned the right to have a go at that.

“And there’s things that are going to happen in the future that we talk about, somebody’s going do something sometime soon or it might be further down the track, but it might as well be in your time.

“It might as well be in your career. The lads buy in, they dig deep, and they put in a performance like that.

“I think the most pleasing thing about it is that everyone knows the All Blacks come out in the second game, especially under the roof here, more cohesive and play a quicker game.

“These lads didn’t let them do that. We started very quick last week (in Auckland) and we did exactly the same. That’s twice on the trot which shows the courage of the players.

But the most impressive thing is we learned our lessons from last week about staying in the game and staying calm, next moment.

“Of course there were some errors, but our mentality never changed. We didn’t get sucked into the allure of the game of 13 men, 14 men, trying to play from everywhere.

“We kept them pinned down and the territory game and the game control was outstanding.”

Ireland were guilty of being ‘too frantic’ at times during the first Test and it cost them. “We just needed to stay calm. We got that wrong. We didn’t action those words and we had that conversation this week,” Robbie Henshaw said in the aftermath of the 42-19 defeat.

That calmness and clinical edge returned in Dunedin, particularly at the start of both halves when prop Andrew Porter struck for his two tries and then, as the second half wore on, captain Jonathan Sexton’s right boot delivered the winning points.

“They back themselves against anyone,” explained Farrell. “The more that we can keep giving them these occasions of playing the best teams in the world, the better they’re going to get.

“I suppose the most impressive thing that we’re doing pretty well at the moment in time is understanding where we’re at each moment at a time and staying calm and not getting not overawed or frustrated with errors or decisions or not executing.

“We’re pretty good at trying to stay neutral and just stay on task, and it’s helping us to play in these big games and compete.” 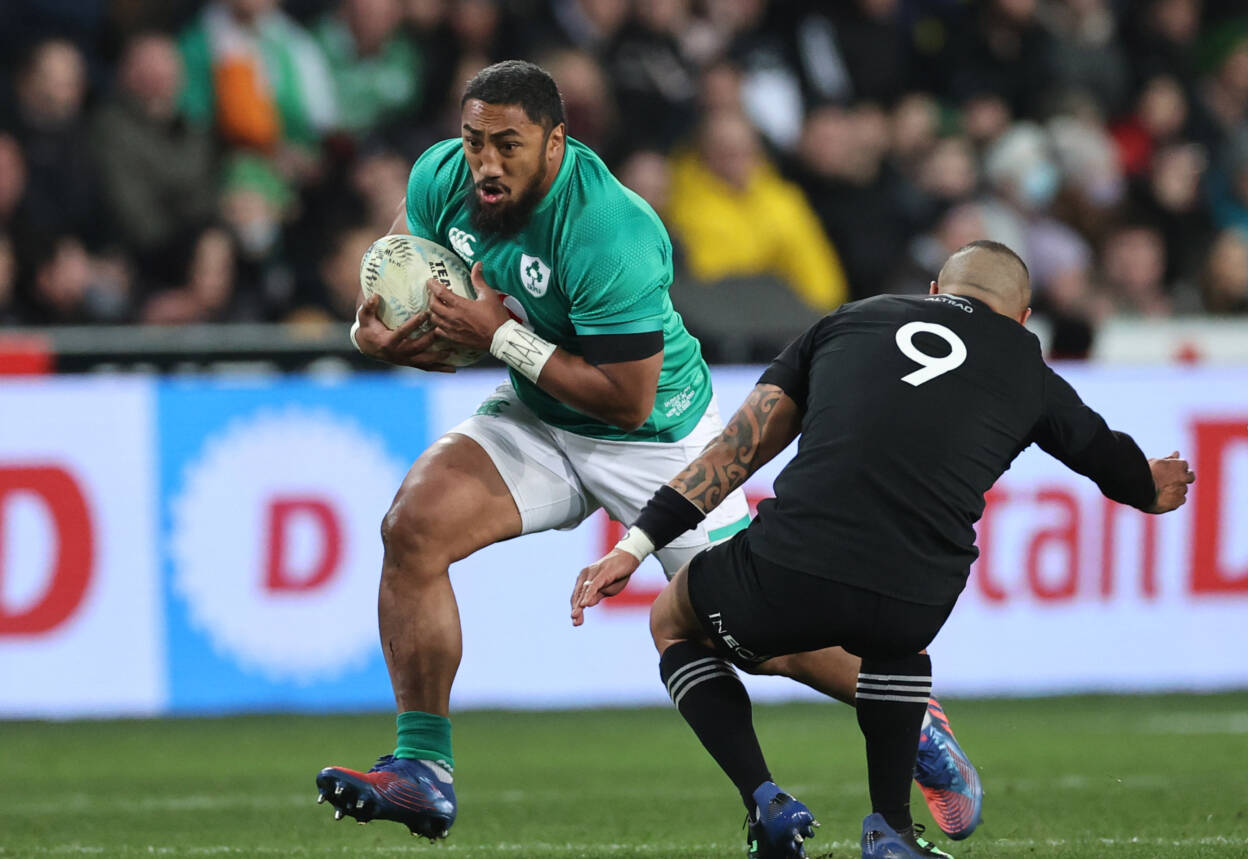 The history-making performance sets up an exciting final week of the summer tour. Wellington’s Sky Stadium plays host to next Tuesday night’s rematch with the Māori All Blacks and then the mouth-watering series decider on Saturday.

One player certain to miss the third Test is Garry Ringrose, who has a confirmed concussion following his first half collision with Angus Ta’avao who was red carded for the head-on-head tackle.

Peter O’Mahony, who had one of his best games in the green jersey, is undergoing a head injury assessment, while young out-half Harry Byrne’s tour is unfortunately over due to a hamstring injury.

Anticipating a backlash from the wounded All Blacks, Farrell admitted that the next few days are crucial not just for those in Test contention but also the emerging players who want to play their part by beating the Māori side.

“We always get a response (from the All Blacks). Everyone knows that, history tells you that. We’re used to it by now. So we’ll look forward to that,” he acknowledged.

“Look, we’ve created a little bit of history for ourselves and little old Ireland, but we’ve earned the right to take it to the last weekend to see what we can do in the final week.

There’s bigger things to think about in regard to this tour for us. We’ve some young lads in that changing room that have been inspired by these lot, who want to get back out there on Tuesday night and perform well against the Māori.

“These lads have taken a lot pain, that’s what we’ve put them under. The pressure of taking them out of their comfort zone.

“The weeks have been totally different to what they’ve been used to before because of us trying to play five games in such a short space of time.

“There’s been no whinging, they’ve been mentally really tough, and they’ll back the lads up as well to make sure they’re in good form for Tuesday night.”