Before the Energia All-Ireland League Men’s Division 1A final, it was very difficult to predict what exactly might happen. Two forecasts that would not have been so farfetched were that it was going to be a close encounter and that Dylan Donnellan would score a try.

Donnellan notched more tries than anybody else in the top flight this season. Coming into the game, he had an incredible try-scoring record, touching down 18 times in just 19 league games.

Clontarf’s ever-reliable maul has proven to be the perfect platform for the Galway-born hooker and it was no surprise to see him cross the whitewash from a lineout drive at the Aviva Stadium on Sunday.

Speaking about his 19th try of the campaign, he admitted: “Ah look, I’d swap every single one of those tries for lifting that cup.

“It’s been a fantastic year and it’s great to have them get us over the line like that. It’s all about the cup in the end and we’ve managed to do it.”

After coming through a bruising battle with a 29-23 win, during which Terenure College got on top at scrum time, Donnellan was full of praise for Sean Skehan’s men and how difficult they made it for ‘Tarf.

“They were right in it the whole way through. They gave a great representation of themselves, they fought massively. They got an early lead, we had to fight our way back in,” he explained.

“We’ve always been focused on the next job and the next moment. We got ahead with that try (from Ben Griffin before half-time), but we let them back into it and we had to dig ourselves out of a bit of a hole.

“But, there probably wasn’t just one moment that won the game for us. It was just the graft the lads put in throughout that 80 minutes.” 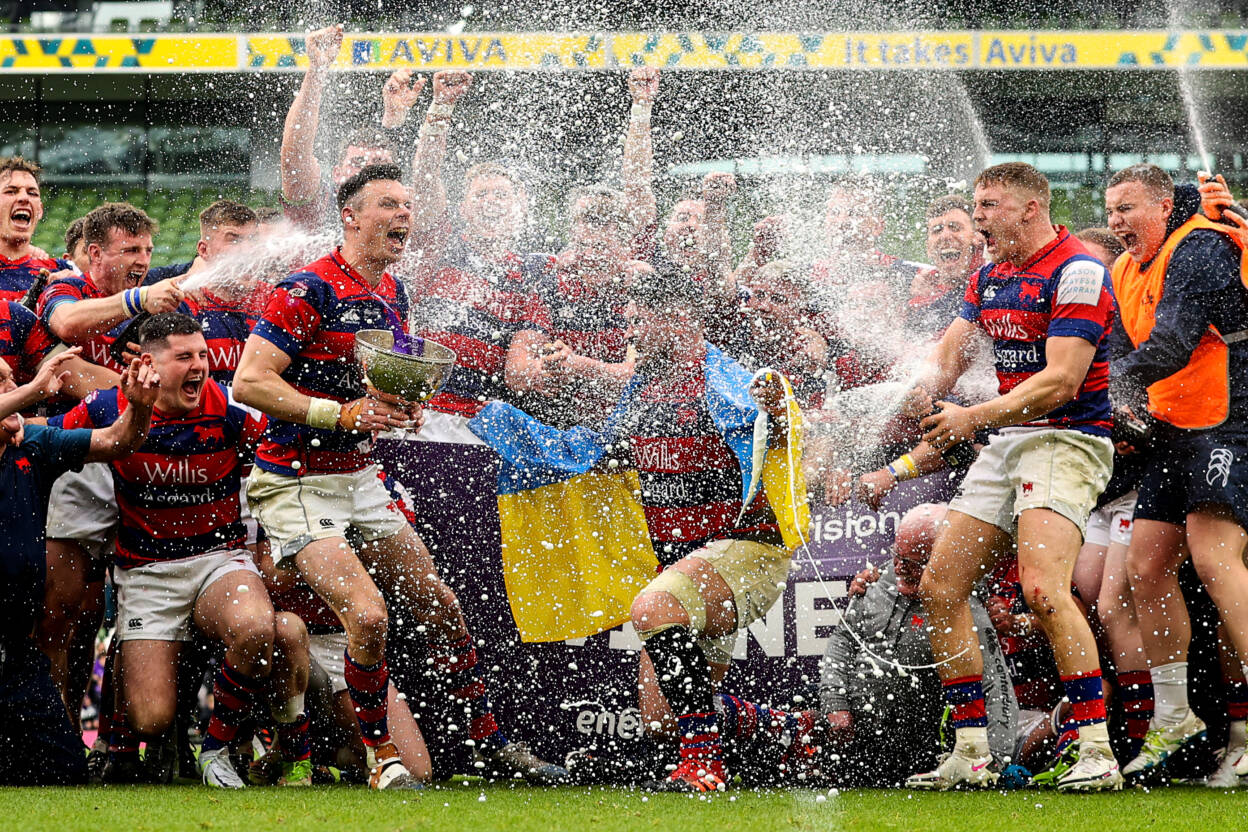 The 27-year-old, who played for Galway Corinthians like his father before him, has had an interesting journey in rugby that has seen him represent both Connacht and Leinster at underage level.

He was part of the Ireland Under-20 squad for the 2014 World Rugby U-20 Championship, and had professional stints in France with Biarritz Olympique and in England with Yorkshire Carnegie (now Leeds Tykes) thanks to connections of Leinster senior coach Stuart Lancaster.

Ranking Sunday’s achievement as the best moment of his rugby career so far, Donnellan added: “This is the high, this is what it’s all about.

“To get to play in the Aviva in front of this amount of people with all your best mates and you get to lift the cup. It’s the best and all you can ever ask for.” 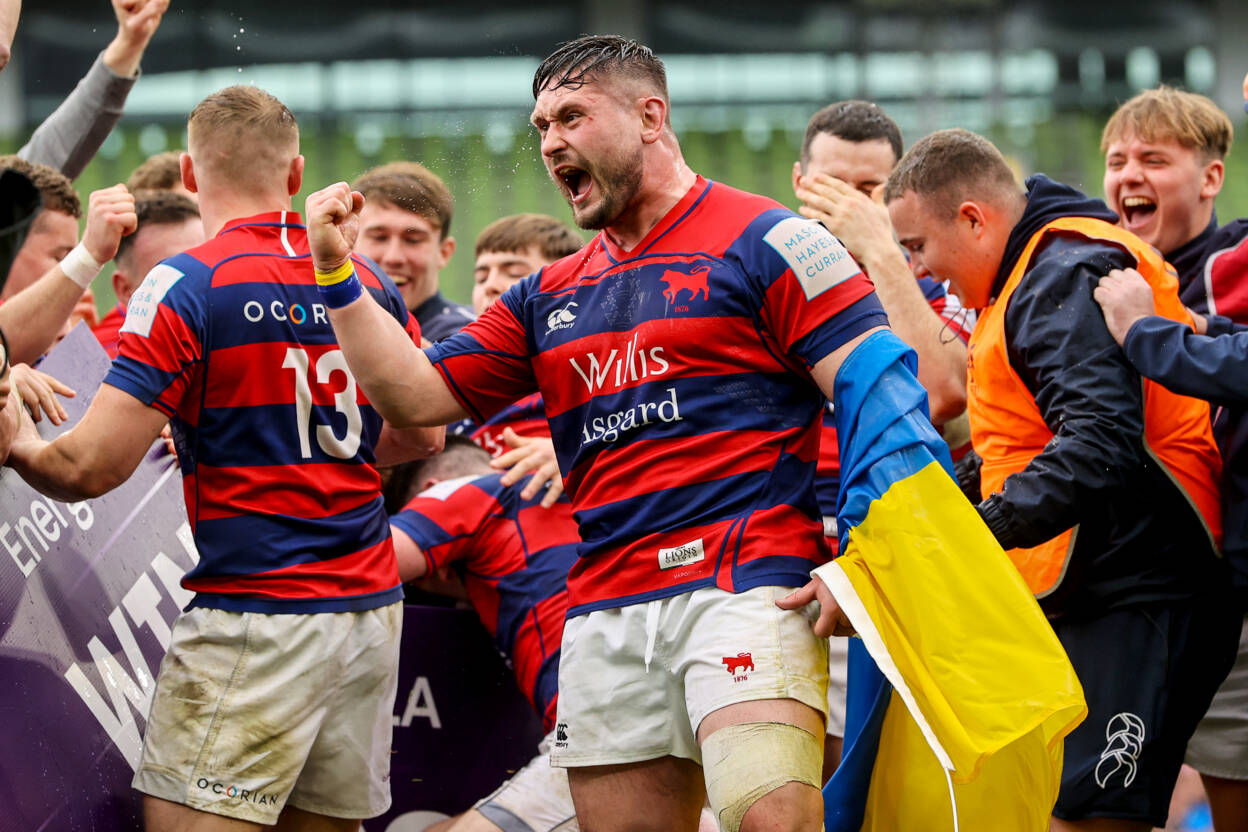 Donnellan’s front row colleague Ivan Soroka was draped in the Ukrainian flag as the post-match celebrations began. It was a nod of support to the country of his birth amid Russia’s ongoing invasion of Ukraine.

Ivan’s younger brother Alex, who also played a number of games for Clontarf during the regular season, was Leinster’s player-of-the-match against the Stormers, also donning a Ukrainian flag for his post-match interview in Cape Town.

The Soroka family have raised over €50,000 in an online appeal for a children’s hospital in Kyiv – you can donate here. Their ‘Tarf team-mates want their league success to give the brothers some hope at such a trying time.

Speaking about the war’s impact on Ivan and Alex, Clontarf captain Matt D’Arcy said: “The guys were in tears in the dressing room after certain matches. We just rallied around them, it’s something that really hit home with the squad.

“They’re a great family in Clontarf, there’s many other great families there. Obviously a tough year for them, but this will hopefully make it a small bit easier.”

An emotional Ivan spoke to Irish Rugby TV, saying: “It’s absolutely incredible, I’m a bit lost for words at the moment. The support the team’s had today, last week, the whole year has been incredible.

“Clontarf is an incredible community club, an incredible parish club. The support, and not just ourselves, all the other teams, in the sense of the belief that we’ve instilled from the start of the year has been phenomenal.

“So it’s just great to repay all the people who have helped us get to this stage. We’ve a massive connection to our family back home (in Ukraine), but we’ve also been welcomed by everybody here, with open arms for many, many years.

“So just to repay them for the support again they gave us is incredible. It’s extremely emotional. I shed a couple of tears over there with my mam. I’ve got to go find my dad and girlfriend now, we’ll do our best to soak it in now.”