Ethan Graham makes a break, supported by Charlie Sheridan, during the Ireland Under-18 Clubs & Schools team's match against Leinster in Donnybrook ©INPHO/Arthur Forrest

Back rowers James McKillop and Sean Edogbo scored two tries each as the Ireland Under-18 Clubs & Schools team posted a 41-5 win over a Leinster Development side at Energia Park.

Leinster had led thanks to winger Andrew Quinn’s sharply-taken 17th-minute try, but the national outfit, coached by Fiach O’Loughlin and Jonathon Graham, gradually took control and put their chances away.

Lukas Kenny (39 minutes), Edogbo (55 and 70) and replacement scrum half Kyle Read (61) made it a seven-try success, a rewarding finish to the Easter camp for this talented young squad.

Both defences stood up well to early pressure, Oran Handley winning a turnover penalty for Leinster before some decent phases from the provincial side ended with Mark Lee earning a relieving penalty for Ireland. 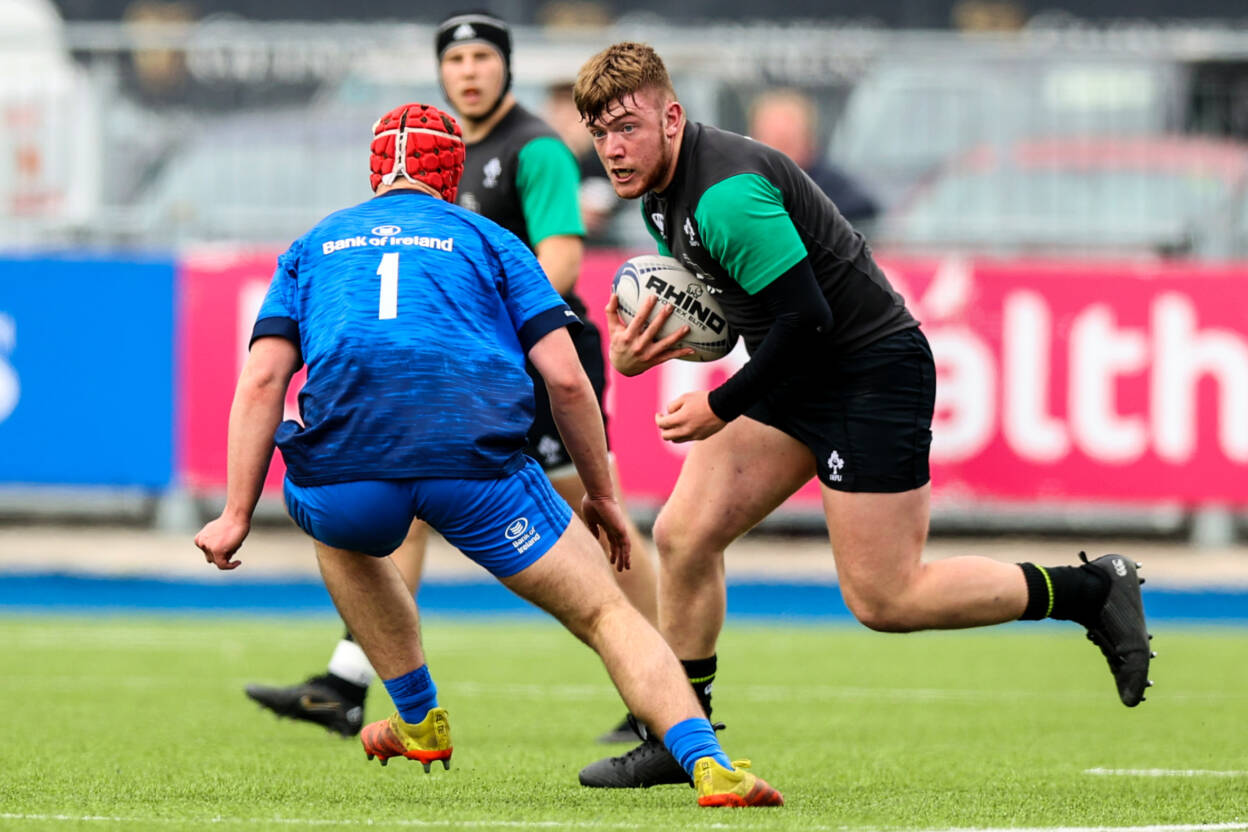 The Ireland Under-18s lay down a marker with their set-piece play, putting together a well-directed maul off a fine Alan Spicer take in the air and then following up with a scrum penalty won by tighthead Theo Bishop.

However, it was Leinster who broke the deadlock. Quinn was released into some space on the right and brilliantly won the race to his own chip kick, grounding the ball despite the presence of two defenders.

Stephen McMahon missed the conversion from the right touchline and as Leinster quickly pressed from an Oscar Cawley break, Rainey Old Boys lock Lee again showed his ability at the breakdown to win a penalty.

Louis McGauran got in to disrupt an Ireland maul, gaining turnover ball in Leinster’s 22, but with Sean Condon increasing his threat on the left wing, it was not long until the sides were level. 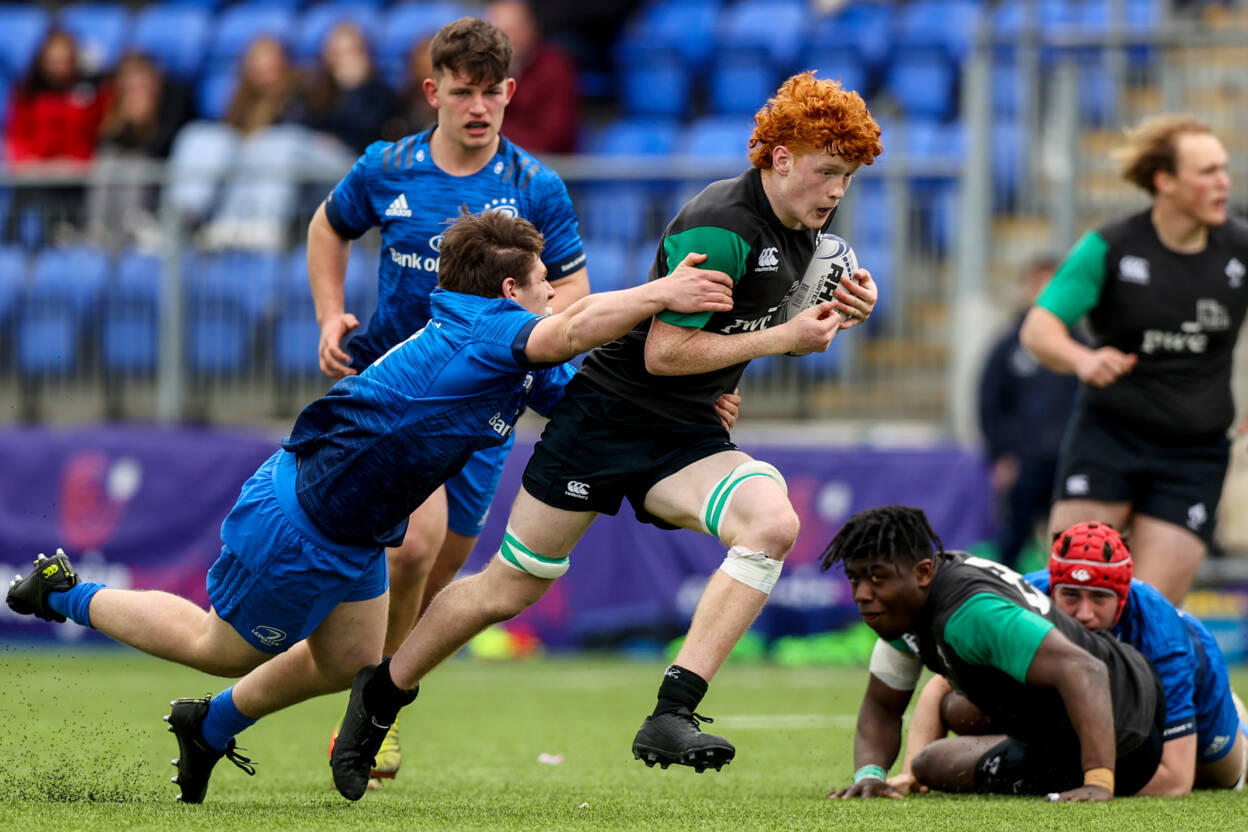 Adam Watchorn and Spicer both got over the gain-line with strong carries and then, with a penalty advantage, Tadhg Brophy’s inviting pass saw McKillop shrug off two attempted tackles to crash over to the left of the posts.

Ireland conjured up an excellent second try just a few minutes later, captain Tom Larke’s offload out of a tackle sending Edogbo over halfway. He linked with scrum half Brophy who did really well to jink past two defenders in the 22 and feed Sheridan for a strong finish from five metres out.

Larke converted and nice hands from the half-backs soon had full-back Ethan Graham darting back into the opposition 22. Leinster scrambled well to keep them out. 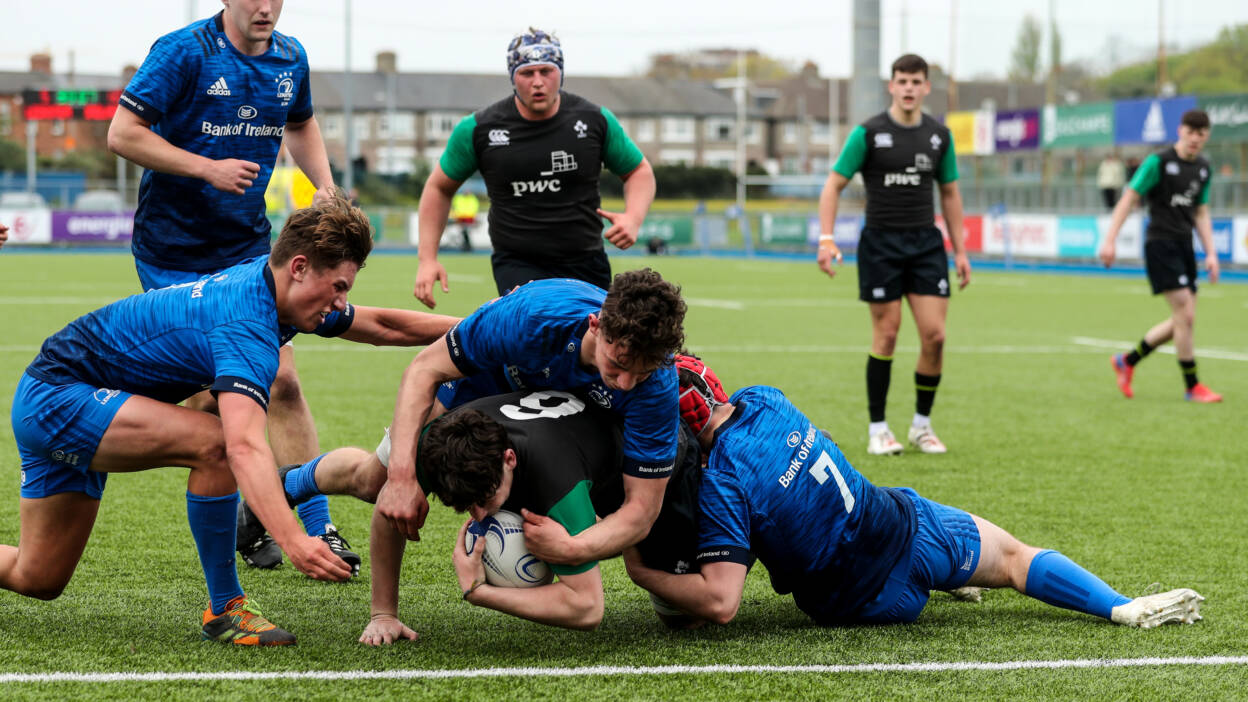 Nonetheless, replacement Kyle Stirling got in at the breakdown to win a subsequent penalty, which Ireland took quickly. McKillop popped up a couple of phases later to complete his brace, taking two defenders with him over the line.

The lead was pushed out to 14 points with Larke’s conversion, and it would have been more but for Cawley and Charlie Redmond Murray combining to hold up Stirling as Ireland pressed for another score just before the interval.

Ireland’s bench kept them on the front foot early in the second period, Grant Palmer winning a penalty and number 8 Edogbo making metres before the ball was moved wide for Kenny to fly over in the right corner past two defenders. 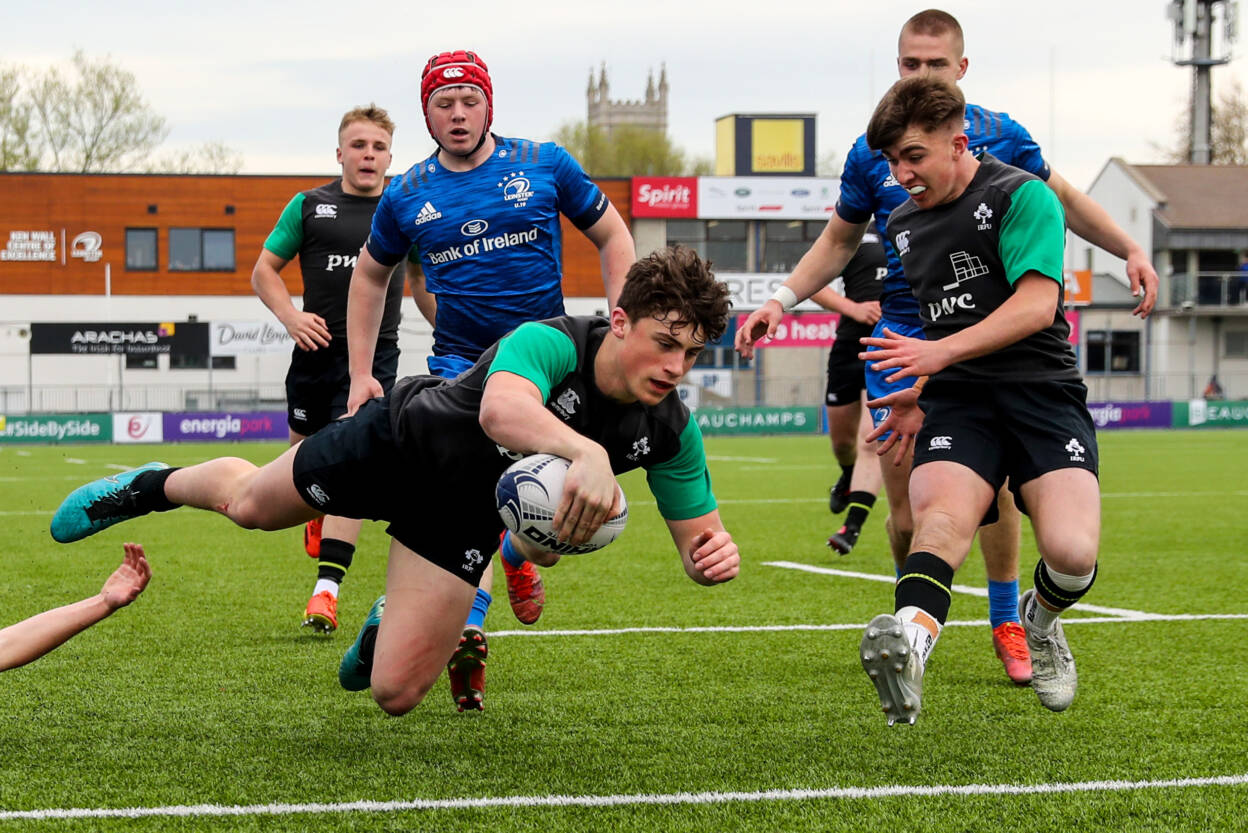 Leinster full-back McMahon thwarted Oisin Pepper with a try-saving tackle and the province tightened up their defence, a well-won turnover from Handley and a slaloming run from McMahon bringing them back up to halfway.

Hard-working second row Lee replied with a turnover of his own and when Ireland got within sight of the whitewash, they were clinical with ball in hand.

Palmer piled through on a 15-metre charge, fellow replacement Ben Gibson took them closer before scrum half Read’s lovely reverse pass sent Edogbo powering over from close range to make it 29-5.

A slick passing move off a scrum created Ireland’s sixth try, Cillian O’Connor and Sheridan combining to put Graham through a gap and he delivered the ball back inside for Read to scamper in behind the posts. O’Connor converted. 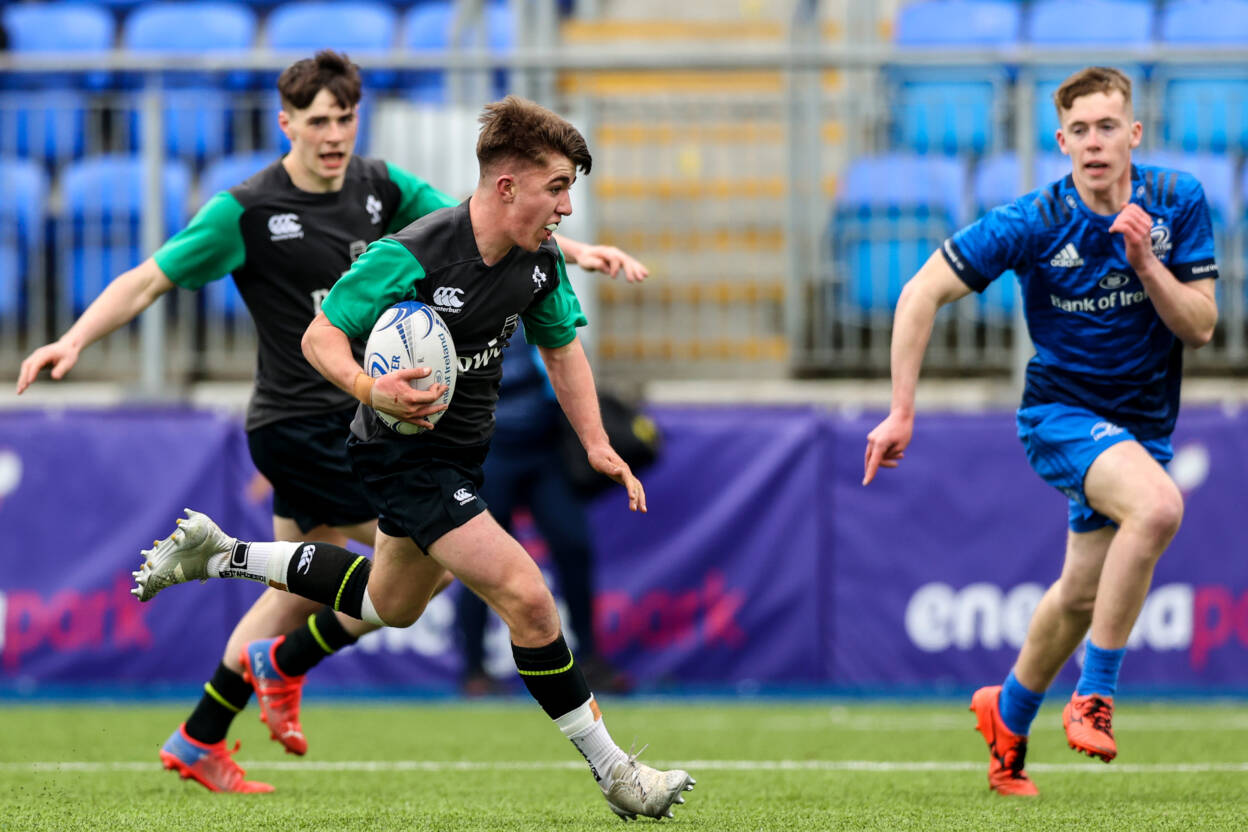 Leinster came in search of a late consolation score, Daniel Cox breaking from a ruck to give them momentum. However, Ireland replacement Dawid Novak dented the attack with back-to-back tackles before winning a turnover penalty.

Back on halfway, Ireland were rewarded for a pacy last-minute counter attack. O’Connor put Sheridan into space, the centre sidestepping inside one defender and keeping the ball away from two more as he put Edogbo through for a rapid 40-metre run-in. 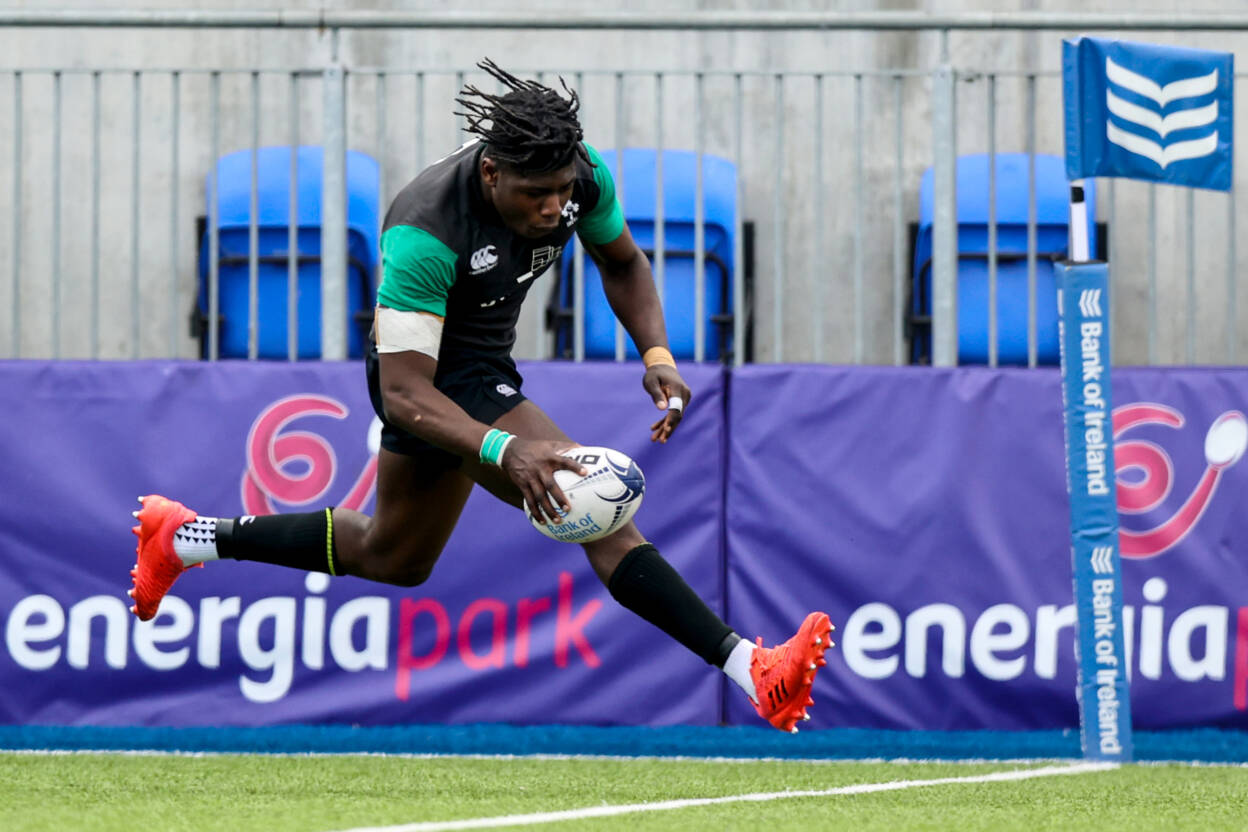