Back to full fitness after missing the November internationals, Dorothy Wall is determined to hit the ground running against Wales in the TikTok Women’s Six Nations.

A finger injury and subsequent surgeries have meant Wall has not donned the green jersey since Ireland’s failed Rugby World Cup qualifying campaign in Parma in September.

The 21-year-old flanker won the 2021 Rugby Players Ireland Women’s 15s Senior and Young Player of the Year awards, and new Ireland head coach Greg McWilliams is hoping she can quickly recapture that form.

“I’ve kind of been thinking about this since the start of October, after having a few surgeries on my finger. The solo training and the sessions by yourself, you’re thinking of the first Six Nations match,” she said.

After playing alongside Claire Molloy and captain Ciara Griffin, who have both since retired, Wall is now one of the more experienced players in Ireland’s back row ranks despite her young age.

The Fethard native will win her 11th cap at the RDS on Saturday (kick-off 4.45pm), returning to the Six Nations stage having shown her resilience through what was a testing time while out with injury. Tickets are available here.

“It was hard during the Novembers because you wanted to play with the team and obviously ‘Junior’ (Ciara Griffin) retired and I would love to have played with her (in her last game).

“In terms of the injury, it was my finger so I could keep my body going, I could run, I could do a full body gym (session) and that was huge for me, that physically I could keep myself going.

“I think every athlete goes through it at some stage where they’re by themselves and you’re pushing yourself to get back into that team environment.

“I’m not an outlier, it happens to everyone so it’s just how you deal with that adversity to get back on the pitch, and to know that you’re going to be with the group again and you’re going to get to play again.”

As shown by her ball-carrying and tackling abilities, Wall has already developed into a key operator in the Irish pack. McWilliams and his fellow coaches are certainly excited to see how much more she can progress.

The Dubliner was pleased to see her get back on the pitch for the latter stages of the Energia All-Ireland League season, with a run of starts for eventual runners-up Blackrock College – two at blindside and three in the second row.

Asked about what has impressed him about Wall, McWilliams admitted: “Firstly, she’s got good leadership. You’ve got trust that every time that she’s training, or every time she’s working in the analysis room or she’s on the rugby field, that she’s giving everything that she can.

“I think a point of difference, you have to look at her footwork and her explosive impacts on the game. She’s got good high HMLs (high metabolic loads), so she’s got the ability to provide impact.

“And I think in a back row, you’re always looking to have a good blend. Between Dorothy, Edel McMahon at seven, and then Brittany Hogan at eight, I think that’s a really good blend that will work well together. 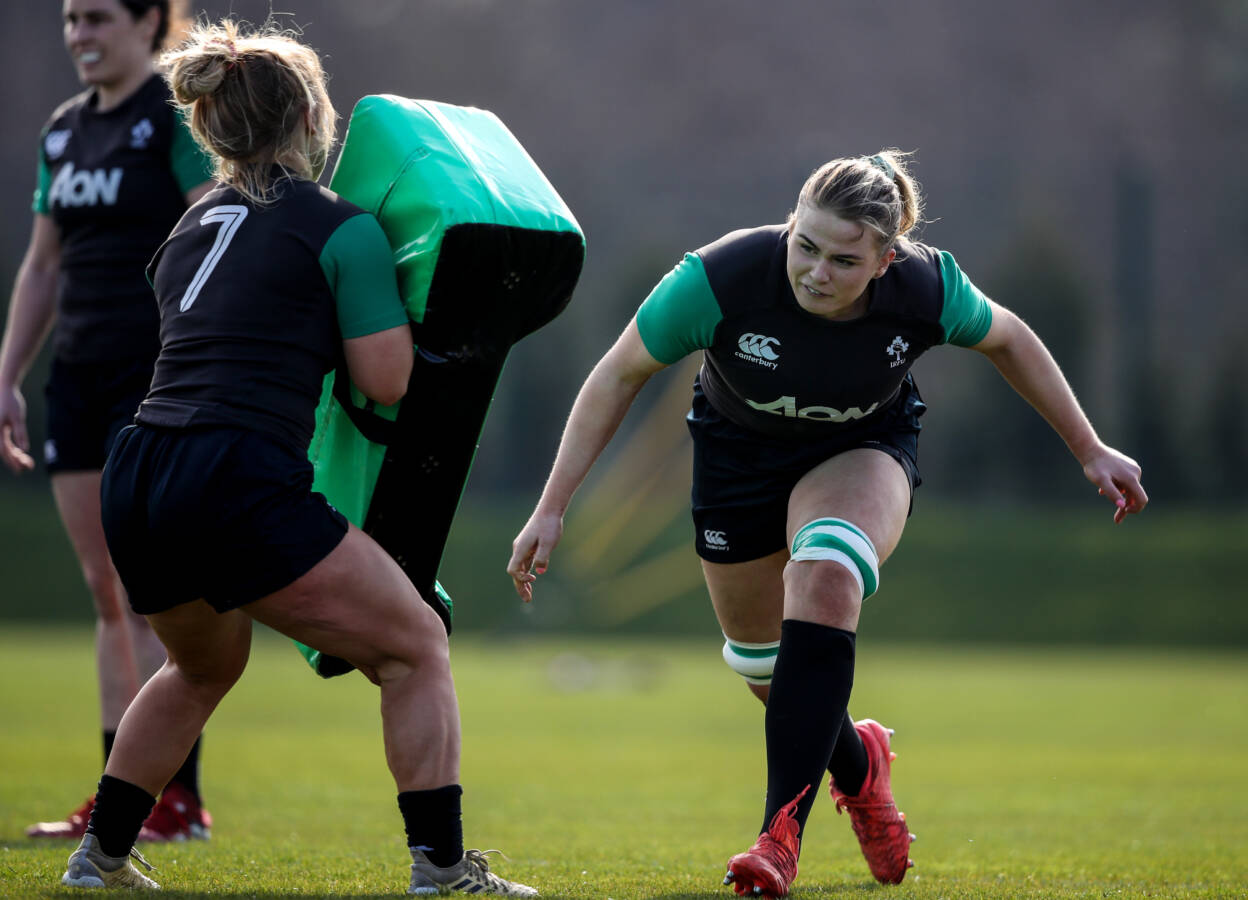 “Selection isn’t just about the individual, selection is about the group and how they fit with each other. Dorothy has a big role to play for us and she’s going to be somebody that we’re excited to see play and excited to see grow.

“The world is her oyster, and as long as she starts believing in herself and backing her skill-set, we’re going to see a special player.”

Wall first came to prominence as a member of the Ireland U-18 Sevens squad that won the UK School Games title in 2017. The IRFU Women’s pathways have brought through a number of those players to be senior provincial and international players.

Indeed, four of that U-18 squad from 2017 will line out against the Welsh at the RDS, with Wall joined by Aoibheann Reilly, who makes her Test debut at scrum half, centre Eve Higgins and replacement back Enya Breen.

Lucy Mulhall, who made her coaching debut at the UK School Games five years ago, also features on the left wing, and Wall has spoken of her admiration for the Wicklow woman, who continues to shine on the World Series stage as Ireland Sevens captain. 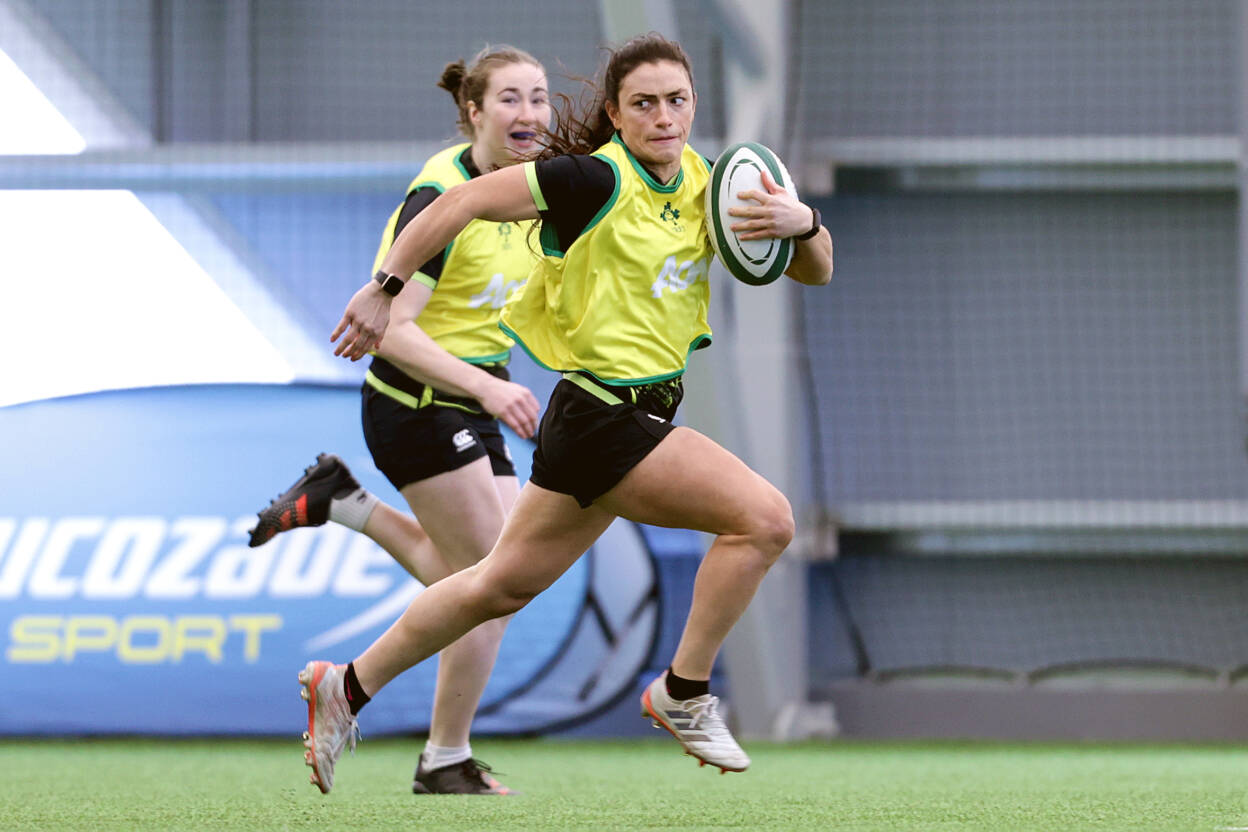 “I was in the Sevens game for four years and that really fast-tracked my education in terms of my skills and my appreciation for hard work,” explained the Tipperary youngster.

“The hard work that goes in in the Sevens is unbelievable – and 15s – but you kind of got thrown in there at 18 and you sank before you swam but you learned how to swim because you had to.

“The likes of Lucy Mulhall is just a different breed in terms of her work-rate and how hard she can push herself mentally and physically, so you kind of aspire to that level of just absolute ruthlessness, I suppose, in how you work.”

Wall is clearly relishing the opportunity to be at the forefront of a fresh dawn for Irish women’s rugby, as they look to build towards next year’s inaugural WXV competition, which will form a key part of the 2025 World Cup qualification process, and beyond.

“There’s great excitement in the squad, and myself as well. I think we’re trying to get the best out of ourselves. It’s a very positive team environment at the moment.

“We’re ticking our boxes. There’s a great sense of camaraderie. I’m really enjoying myself. I think the whole team is.

“It feels like a new chapter for women’s rugby. And I think the other thing is we have absolutely nothing to lose, and that’s really dangerous in a team if you ask me.”