Shea O’Brien has been handed a one-year Development deal with Ulster, having caught the eye playing Energia  All-Ireland League rugby for City of Armagh RFC.

A student at St Colman’s College in Newry, O’Brien gained the aerial skills that would hold him in good stead for playing full-back in rugby through Gaelic football; another sport in which he was hugely talented.

The Newry native had already played rugby at City of Armagh for around eight years by the time he came into coach Antoine Finn’s Under-16s side. “He was quite small in stature when he first came to me, then he took a growth spurt and got a bit taller and wider,” said Finn. “His ball-handling skills and his ability to catch the ball in the air was excellent. He was very good at fielding a high ball – he reminded me of Rob Kearney. He could jump off the ground and land on his feet before taking off like a shot.”

Even as a teenager, O’Brien dedicated himself to developing as a rugby player. “He was very athletic and kept himself in great shape,” says Finn. “In a certain way, he was quite gifted. There are times when you see young kids that you coach, some of them have very good hands and skills; others wouldn’t be quite as good. There are no two ways about it, he was a stand-out player.”

O’Brien enjoyed a great deal of success under Finn’s coaching, particularly at Under-18 level. In 2016, they edged out Letterkenny in the Ulster Carpets Youth League final thriller when Shea was 16. A year later, City of Armagh completed the treble of the Ulster Carpets U18 Youth Cup, Ulster Carpets U18 League and Nutty Krust competitions, with Shea playing a prominent role. Five players – including O’Brien – from that side went on to feature in the Bank of Ireland Ulster Senior Cup-winning team of 2020.

Chris Parker is the current Head Coach at City of Armagh, and first encountered O’Brien when he was asked to come and watch the U18s in the Ulster Carpets U18 Youth Cup final five years ago. “There was a thin, athletic full-back who I remember scored a really good try that day,” Parker says. “I remember speaking to Willie [Faloon – then Head Coach] and thought, “the full-back was very good!”. He told me, “He has another year at youth level yet and we won’t be seeing him for a year!”. That was when he first popped onto my radar.”

O’Brien continued to bring his impressive work ethic to the senior squad when he broke through as an 18-year-old. Parker describes him as mature beyond his years with his approach to everything beyond training sessions – from recovery to nutrition and athletic development. 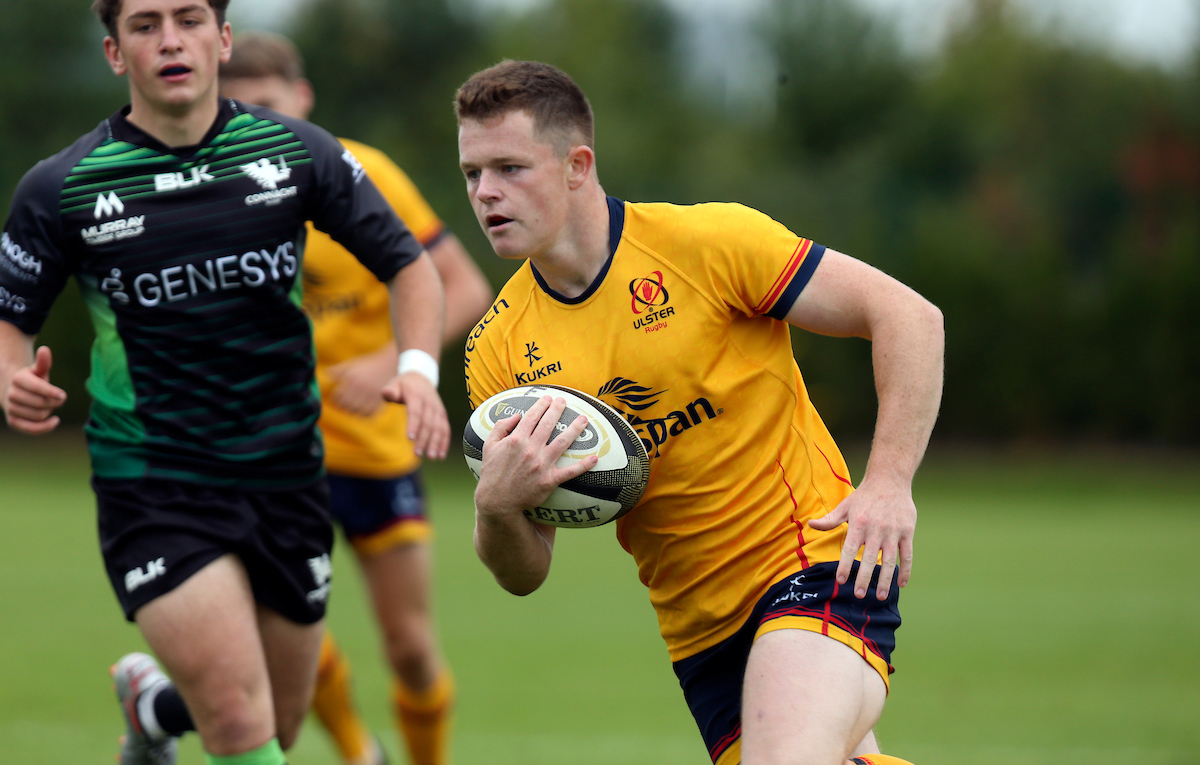 Shea O’Brien during the Development Interprovincial A game Connacht A and Ulster A at the IRFU High Performance Centre, Dublin, Ireland. Photo by John Dickson/Dicksondigital

Former Ulster and Connacht openside – and now Ulster Rugby Academy Elite Player Development Officer (Forwards) – Willie Faloon was O’Brien’s Head Coach at City of Armagh and now has had to opportunity to see him train alongside the Ulster Senior players and Academy. He also remarks on Shea’s commitment level. “He has developed his physical profile in the last couple of years and that only comes through hard work,” he says. “He shows that in the way he’s early for his sessions and is one of the energisers in the club.”

In terms of his skillset, his former coaches all note his ability in the air as a key area to his game. “From his GAA background, his high-ball work was something that was a real strength for us,” says Parker. “He could get up above defenders in the air and catch the ball above his head which gives him an advantage. That was a stand-out attribute that he was able to bring to the team.”

Parker and Finn also allude to O’Brien’s “x-factor” and ability to create something out of nothing. “You knew if he got the ball in a wee bit of space that something could happen”, claims Parker. “If you were in a game with opportunities and you got him on the ball with space, he had the pace and agility to beat a man.”

Finn adds, “he was very good at moving the ball and was very balanced with his footwork. I hope he gets to display how good his agility is and how he can move from the left to the right foot.”

Shea’s stock rose two years ago when City of Armagh defeated Ballynahinch by 38-34 in a pulsating, topsy-turvy game of rugby in the Bank of Ireland Ulster Senior Cup final. O’Brien scored two superb solo tries that evening and was presented the Bank of Ireland Player-of-the-Match Award. It was this and his performances for Armagh that earned him the Ken Goodall Club Player of the Year in the Ulster Rugby Domestic Rugby Awards at the end of the COVID-disrupted season. 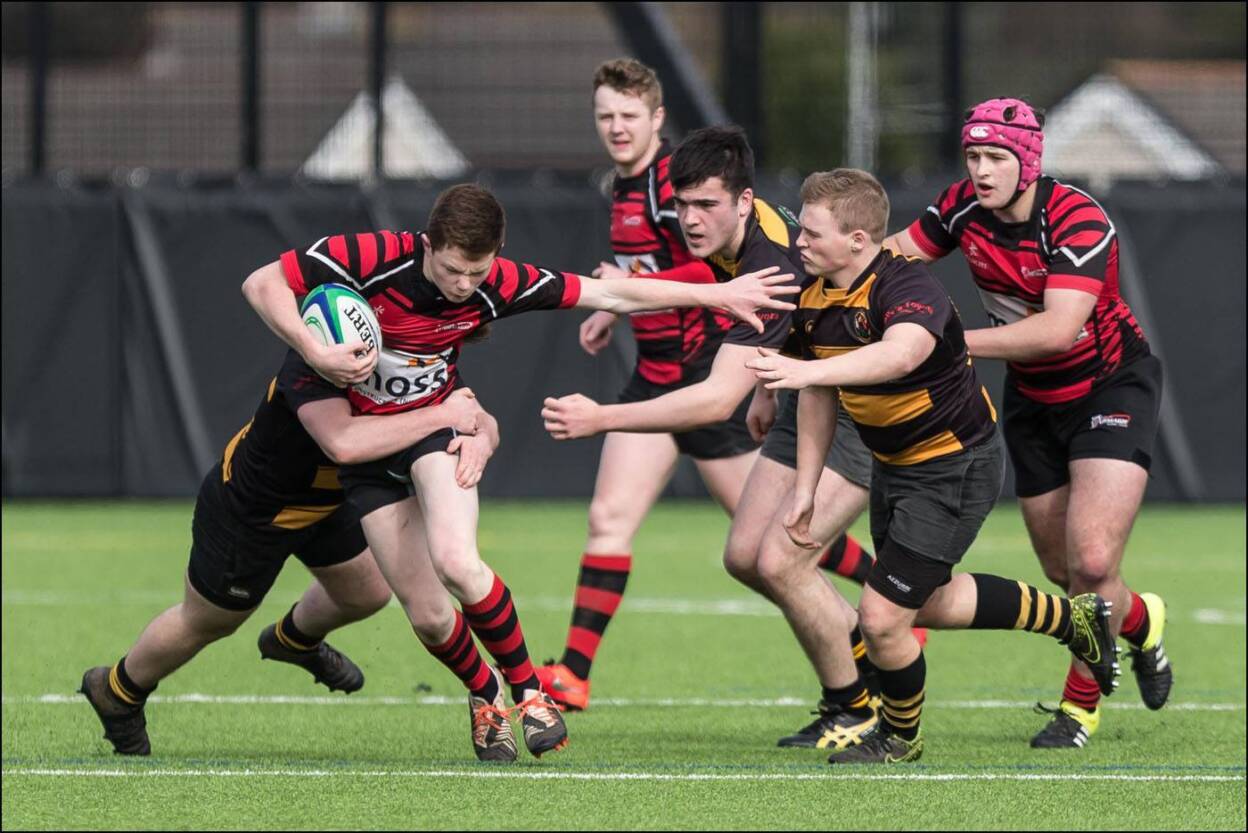 O’Brien was brought to the attention of Ulster Rugby Academy Manager, Gavin Hogg, and was invited to train with the Academy in the summer of 2021. He was selected to start at full-back in all three games in a series of Development Inter-Pro fixtures and scored a try against Connacht Eagles.

Faloon noticed how well he integrated into those training sessions and games. “He has been with the Ulster Development group throughout the summer and every session, he was pitched up, did his job and did it well,” Willie remarks. “He was keen to learn and got a few sessions with the Senior team. He didn’t stand out as a guy who had just shown up for his first session; he did really well. That’s what has got him noticed; he was very consistent in those Development Inter-Pros and he’s got an opportunity now to give it a real go and see where he can go.”

All three of Shea’s former coaches felt early on in their time coaching him that he had what it took to step up to the next level. “We always saw the raw potential and knew if he was given a shot due to his attitude, commitment, worth ethic and desire to learn that he would thrive in that environment,” says Parker. Faloon adds, “I’ve always had a feeling that with the right people around him to push him on and with the right opportunity that he could go on to that next level. I’m just delighted he’s getting that opportunity.”

In 42 All-Ireland League appearances at the time of writing, O’Brien has contributed an impressive 89 points through 17 tries and 2 conversions. When asked about O’Brien taking “the road less travelled” towards professional rugby via the AIL, all of his former coaches agree that it should hearten young club players that there are opportunities to be identified further down the line. “I don’t think the AIL gets enough credit in the quality of rugby played there is of such an extremely high level and the quality of players there too,” Parker comments. “Hopefully Shea is an example that if you miss out at 16, 17 or 18, don’t give up – there is still a pathway there and the AIL is very much a breeding ground due to the high quality of rugby being played.”