Ireland head coach Andy Farrell said he was ‘over the moon’ to come away with a 32-15 bonus point victory over England in the fourth round of the Guinness Six Nations at Twickenham.

Following the sending off of England lock Charlie Ewels inside the opening two minutes, Ireland played virtually the whole contest with an extra player.

This put Eddie Jones’ men on the back foot, but with their scrum getting on top and out-half Marcus Smith knocking over five penalties, they were back level at 15-all by the hour mark.

The visitors had already crossed the whitewash through James Lowe and Hugo Keenan, however, and they dug deep during the closing stages with their bench having a big impact.

Replacements Jack Conan and Finlay Bealham claimed late tries to ensure that Farrell’s charges are still in the hunt for Championship and Triple Crown honours, ahead of next Saturday’s final round showdown with Scotland.

Speaking at the post-match press conference, Farrell admitted: “(I’m) over the moon. If you had said that to us before the start of the game (that we’d win 32-15 with a bonus point), we’d have snapped your hand off, wouldn’t we?

“It’s obviously a tough place to come and we were under a bit of pressure there in that second half for a while. Some of that was our own doing, but the composure that we showed at 15-all to stick to our task and come away with the bonus point was something that we should, as a group, be immensely proud of.

“We started the game really well, didn’t we? We were cutting them open and that was with 15 men. Even just subconsciously, when they go down to 14 men there was space there for us.

“Some of the rugby was outstanding and we were making line break after line break. It was the forced pass that we had to just calm ourselves down and recycle the ball.

“Trust ourselves a little bit more to just go through one or two more phases and get the rewards from there. It wasn’t just that. I thought England’s set-piece was outstanding.

“Our discipline, at times, creaked a little bit. Continuity in the middle third of the game was hard to come by and that’s what you want when you’re down to 14 men so hats off to them.”

Despite acknowledging there were areas of their play that did not hit the heights that he knows his side are capable of, Farrell was pleased to see them overcome some of the problems that have led to disappointing results at Twickenham for Ireland during the recent past.

“We learnt a lot about ourselves. We’ve been here before, been under pressure and certain aspects of our game have not gone well. The game has run away with itself and we’ve been on an early flight back.

“This time around, the crowd were behind them, momentum was going their way and sometimes when you’ve got 14 men you’ve nothing to lose.

Sometimes when you’ve got 15 men and you’re playing against 14 men, you’ve got everything to lose. We became a little bit desperate at times. A little bit inaccurate at certain stages.

“But having said all that, we take the rough with the smooth and we came away with a brilliant victory in the end.

“I thought the lads were really calm whilst under a bit of pressure. They stayed on task and thoroughly deserved that bonus point in the end.” 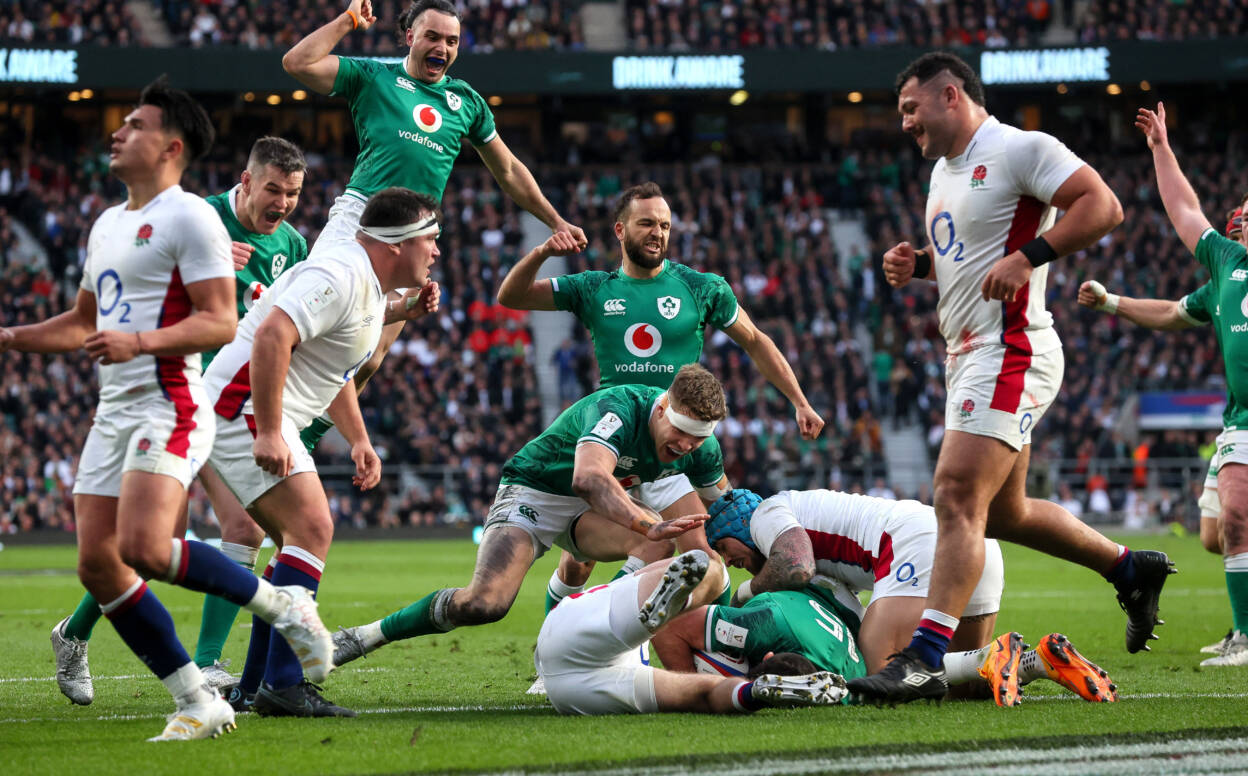 Ultimately, Farrell and Ireland arrived in London in search of a result and that is exactly what they left with. Two points currently separate them from France at the top of the Six Nations table.

With the Grand Slam-chasing French facing England in Paris next Saturday night, another win for Ireland at home to the Scots, in the middle match, could still reap a considerable award.

“Test matches are never perfect, that’s why they’re called Test matches. They are there to put you under pressure,” added Farrell.

“The quality of two sides is always going to make it very difficult. It’s never going to be perfect. We managed to find a way. If you paid good money for that at this stadium, I’m sure you’d be happy.

“We talked during the week about finding a way to get our supporters singing towards the end and we did that. We go home tonight to recover very happy. Job done and we move on to the next one.”