Ballynahinch broke their duck with a long-awaited Energia All-Ireland League win away to relegation rivals UCC.

Former Ulster prop Kyle McCall barged over for a brace of tries as ‘Hinch triumphed 19-9 at the Mardyke, winning at the 13th attempt in this season’s Division 1A campaign.

With UCC and Cork Constitution both retiring the number 15 jersey for the remainder of the campaign in tribute to the late Tom Kiernan, full-back George Coomber wore number ’54’ for the students, in recognition of Kiernan’s number of Ireland caps.

However, facing into the wind in the first half, bottom side UCC struggled early on and leaked two maul tries to McCall inside the opening 16 minutes.

Centre Daniel Squires did manage to open UCC’s account with a penalty on the half hour mark, and he was successful with the first of two long-range kicks early in the second period.

Ballynahinch’s lead was soon under serious threat as Squires’ third penalty success, on the 65-minute mark, whittled it down to 12-9 with ‘Hinch centre Ryan Wilson in the sin bin.

The visitors seized the initiative again though, the pressure they exerted on the home defence landing UCC replacement Scott Buckley in the bin at a crucial stage.

In the end it took a converted Greg Hutley effort in the 73rd minute to seal ‘Hinch’s victory, although they remain in the bottom two with UCD still 11 points ahead of them.

Kevin Croke’s young guns, who included Munster’s Paddy Patterson in the number 9 jersey, led on four separate occasions but Con bounced back for a dramatic 31-all draw.

Former Con captain Niall Kenneally crossed in the 71st minute and Aidan Moynihan converted for the game’s final scoring act, denying the students what would have been a deserved scalp.

After an initial penalty miss from Cosgrave, UCD hit the front in the ninth minute when their centres released O’Grady through a gap from halfway, and he had the pace to burn past Billy Crowley and score out wide. 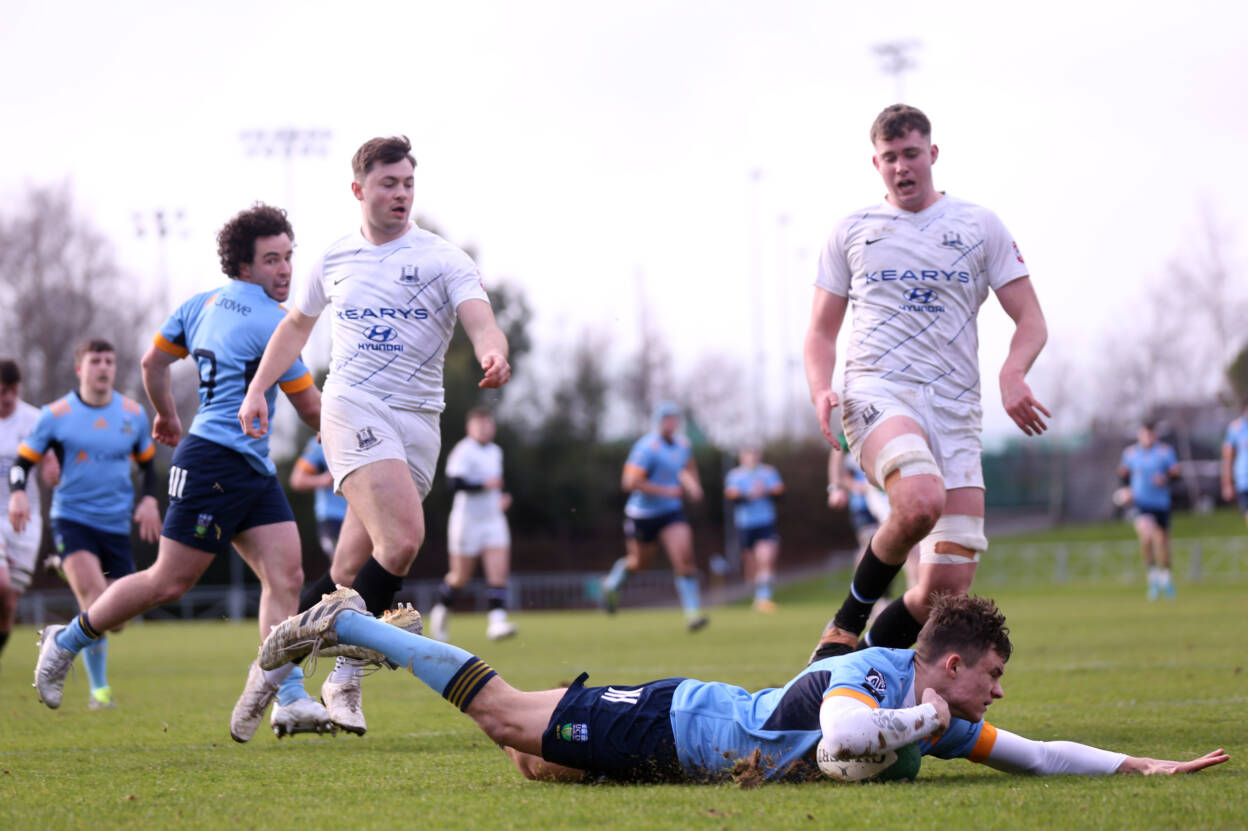 Captain Aidan Moynihan, who marshalled Con impressively, sent over the conversion for the first of his 11 points, but the students bounced back approaching half-time.

A good spell of carrying off a scrum ended with powerful hooker Sheehan barging over from a few metres out. Cosgrave converted and also tagged on a penalty.

The in-form Max Abbott crashed over from a late maul to reduce the arrears to 17-14. It was nip and tuck for much of the second half, Moynihan kicking Con level seven minutes in. 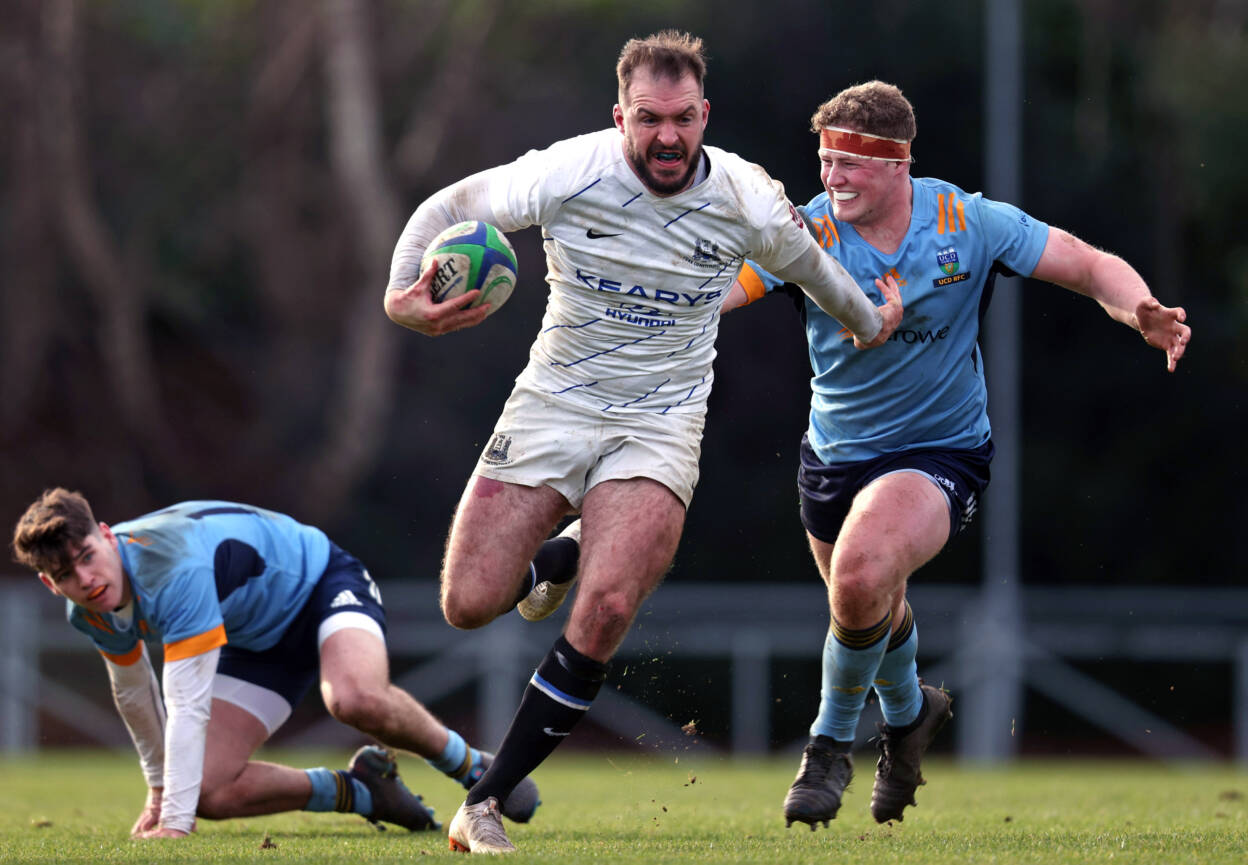 Barely a couple of minutes later, centre Ryan ran in a terrific counter-attacking try for College, and even though Murphy crashed over from a Gerry Hurley pass, UCD failed to waiver.

Replacement Mangan ran hard onto a Patterson delivery and reached over the line, despite a Niall Kenneally tackle. Cosgrave’s conversion of the bonus point try left it 31-24.

Crucially, Kenneally got one back on the hosts with time running out. From first-phase lineout possession, he broke Jack Coolican’s tackle and swerved around Patterson to score from the edge of the UCD 22.

An assured Moynihan knocked over the conversion from the left, his kick keeping Brian Hickey’s fourth-placed charges on course for the play-offs. Munsters, in fifth, trail them by five points. 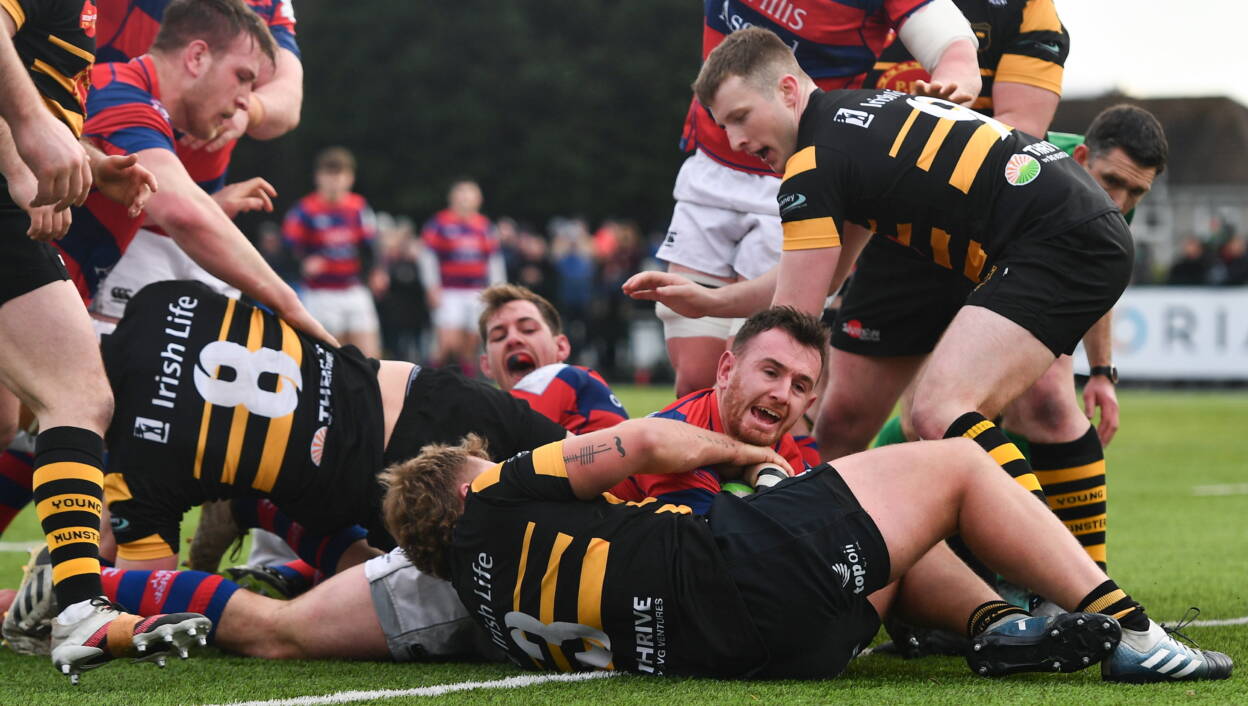 The D’Arcy twins were at it again for leaders Clontarf in a hard-earned 22-14 success against Young Munster at Castle Avenue.

Maul expert Dylan Donnellan took a familiar route for his 12th try of the campaign, before the D’Arcys, Matt and Adrian, were at the heart of a sweeping 27th-minute attack straight from the restart.

Clontarf captain Matt broke out of the 22, combining with Tadhg Bird before some nice offloading in midfield allowed Conor Kelly to put Michael Courtney into space. He fed the other D’Arcy brother to dive over in the left corner. 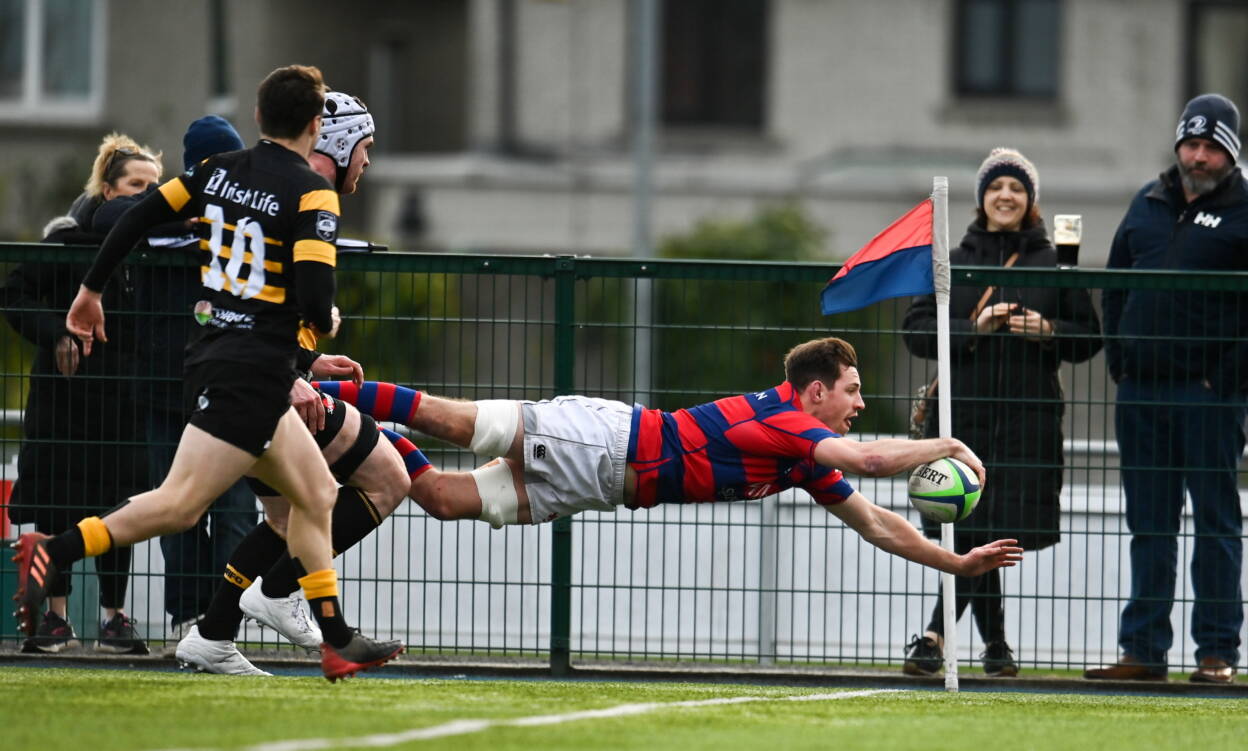 Munster prop Josh Wycherley came off the bench to burrow over for the Cookies’ second try, but a late penalty from ‘Tarf replacement Conor Kearns sealed the result.

‘Tarf and Lansdowne are leading the race for home advantage in the semi-finals, with the headquarters club edging out Dublin University 20-15 in a tense clash at College Park.

Trinity, who fell behind to a Peter Hastie penalty, forced an 18th-minute try through hooker Mark Nicholson, but were adjudged to have been held up on three other occasions during the first half.

Former Ulster flanker Clive Ross raided over to give Lansdowne a 13-7 half-time lead. Sean Galvin countered from a kick, dashing up into the 22 before numbers on the left saw Mark Boyle put Ross over by the corner flag.

Out-half Hastie kicked well, finishing with 10 points, and a 61st-minute maul try from Luke Thompson was enough to put the visitors just out of reach.

Trinity made it a nervy finish when they swung play from one wing to the other, flanker Alan Francis’ long looping pass setting up Aran Egan to cut in from the left touchline and score, completing his own 10-point tally.

Third-placed Terenure College made it nine wins on the trot, squeezing past a valiant Garryowen side that had looked the likely winners at Dooradoyle.

In-form centre Bryan Fitzgerald and Tommy O’Hora both touched down for Mike Sherry’s men who led 17-10 at half-time.

However, ‘Nure capitalised on a sin-binning to edge it 18-17, out-half Cathal Marsh clipping over a penalty before hooker Levi Vaughan produced a powerful try finish from a blindside break that involved Jordan Coghlan and Alan Bennie.