As the Energia Women’s All-Ireland League season already advances towards its fourth weekend, the return of domestic action and the sight and sounds of club rugby resuming in all four provinces has been a major fillip as we escape the clutches of the pandemic.

It has been most welcome to witness some brilliant rugby over the course of the opening weekends of the 2021/22 season, the excitement levels among players, club members and the Irish Rugby public reaching fever-pitch following a period of such inactivity at our grounds around the country.

The quality of rugby on show throughout the recent Vodafone Women’s Interprovincial Championship has been followed up by the start of the Energia All-Ireland League, ensuring there is a constant serving of domestic action for us all to enjoy on as we enter the winter months.

The emergence of fledgling talent through the Interprovincial competitions – both senior and Under-18s – is a hugely exciting and encouraging sign for Irish Rugby, with the IRFU’s Rugby Development department, led by IRFU Director of Rugby Development Colin McEntee and IRFU Women’s Development Manager Amanda Greensmith, overseeing the continuing evolution of the pathways and structures in place across Irish Rugby.

“Outside of the 10 Women’s All-Ireland League clubs, we have 64 other Women’s clubs in Ireland,” said McEntee. “If you look at the recent Interpros or the Under-18 Interpros, there is a lot of talent coming through, and not all of those players are coming from the 10 AIL clubs either.

We have a lot of Rugby Development Officers on the ground that are linking it all together. It’s about connecting our programmes, from Canterbury ‘Give It A Try’ to Girls X7s to Schools Development League, to create a sustainable model with a lot of competition and opportunity.

“We’ve also got really good initiatives going on with the colleges because there is a drop off from clubs to third level, but we’re working hard to put a spotlight on that area.”

The successful staging of the Women’s and Under-18 Interpros throughout August and September launched the new domestic season, and certainly the hope is the positive momentum will continue through the Energia All-Ireland League.

With the league expanding to 10 teams this year there has been progressive growth in that regard, but a couple of one-sided games across the opening weekends have stood out.

McEntee continued: “Initially, when we set up the league and invited two new teams to join, we said the first year was about getting it up and running while acknowledging there will differences in standards and the recommendation was for the first half of the season, everyone would play everyone to see the lay out of the land.

“Otherwise you’re making subjective comments and then the second half it divides into the top four and the bottom six.

“Our thinking was we wanted to have meaningful games and we were indeed anticipating somewhat that there could be differences in scores, but at least in the second half that allows the clubs then to to play at a higher level and to really drive on.

“But it also allows the clubs that are developing to play more, I suppose, at their level where they are today. That doesn’t mean they’re going to stay there and parallel to that, we are staying in contact with those clubs and those emerging clubs.” 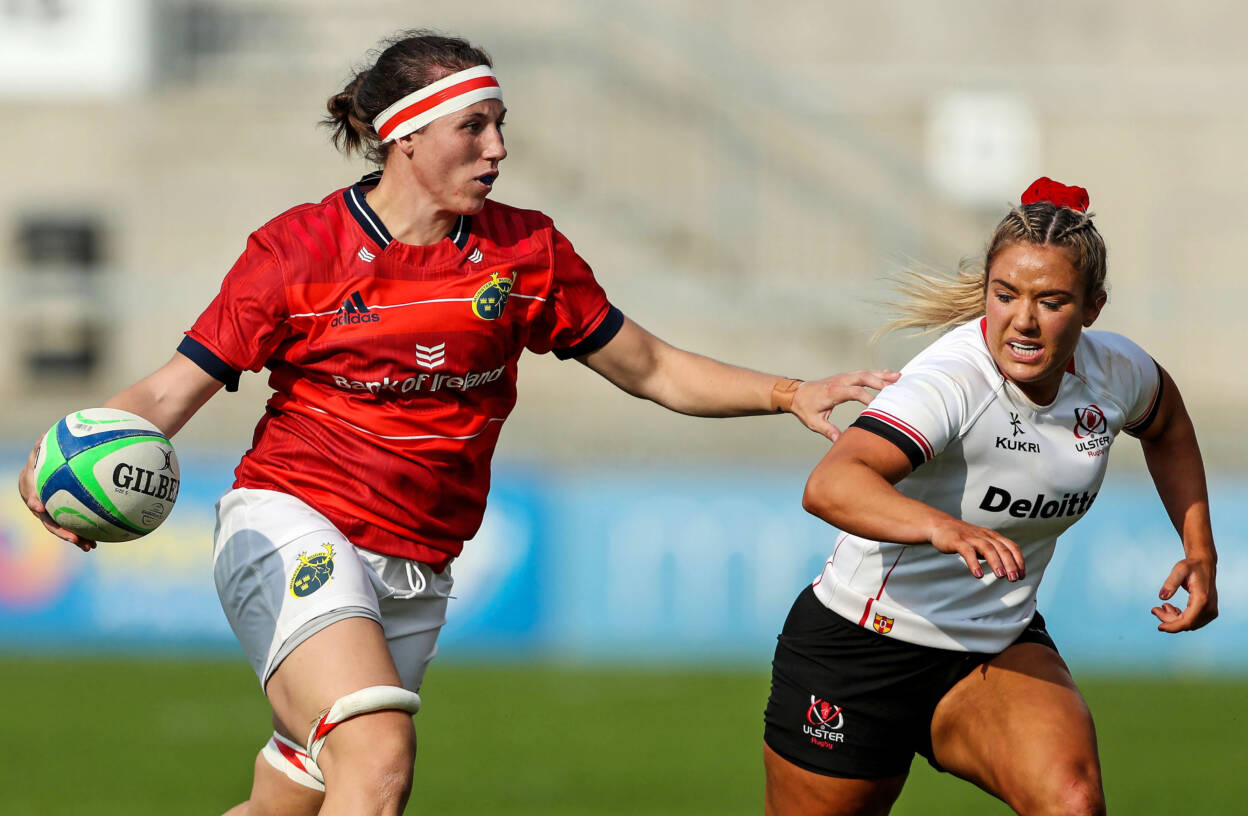 Wicklow RFC and Ballincollig RFC are the two new additions to the Energia Women’s All-Ireland League this season.

In the second round, Wicklow suffered a heavy defeat at the hands of a Railway Union outfit bolstered by their returning Ireland internationals, but McEntee admits there were always going to be growing pains and the most important thing is that all clubs are supported on their journey.

“Wicklow are a fascinating club,” McEntee acknowledged. “They built it from the ground up for want of a better word. There’s a good club, good culture. They’ve minis, they’ve youths, they’ve adults.

“For the league, that exposes a difference in standard where we are today but you know, we’re big enough to know if we have to change things we absolutely will.”

A key focus for McEntee is on coaching support.

There is limited financial support we can give and we do have our club support scheme for every club in the country. In addition to that, we do have a few quid for the All-Ireland League clubs as well.

“For the women’s, it’s initially about trying to get them up and running and to really just get them to focus a little bit around coaching and strength and conditioning.

“To say that it’ll be a switch overnight isn’t the reality. I think there’s a lot of moving parts in this and we have to put our hands up and take responsibility, but so does everyone. We all are working towards a common goal.”

Looking ahead to the rest of the campaign, the regular season of the Women’s Energia All-Ireland League has been shortened to nine games, finishing on December 11.

The remaining six teams will compete in a round-robin conference. This conference will feature its own trophy and ensure more competitive games for all participating teams in the post-season as an additional measure to offset the impact of Covid-19 on clubs. 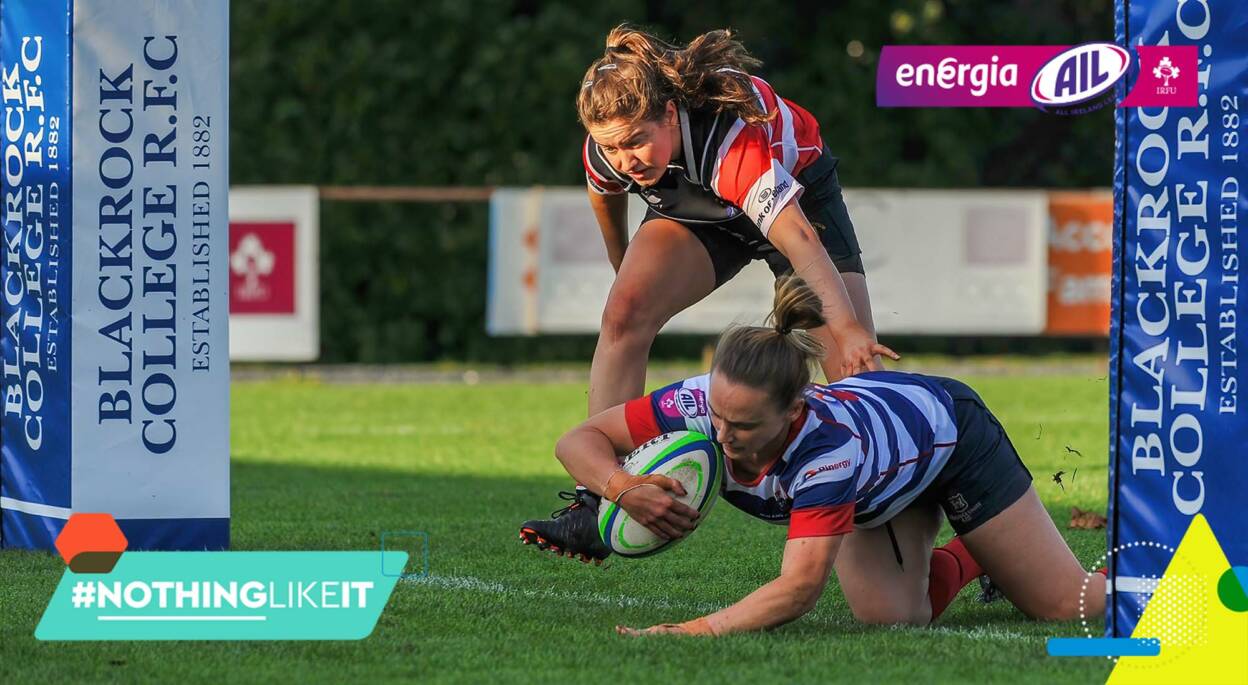 “The flexibility around the competition model, we’ll absolutely look at that and we’ll be big enough to say okay if it needs attention, we’ll do that,” McEntee stated.

“We always said this will be a year where we will learn a lot, and as I mentioned earlier, see the lay of the land. There’s huge benefit to that too.”

Overall, as club and domestic rugby returns, McEntee is excited about the potential of the women’s game in Ireland, and the success of programmes such as ‘Give It A Try’ is a good indicator of the opportunities that exist.

“There is massive potential to grow the game and that’s where I see the AIL,” he adds. “It’s going to take time to get the standards up, and that’s why we might need to tweak as we go, tweak the competition models.

“No one wants to see those sort of results but I also have to respect where Wicklow are and where their ambition is because they’re a super club.

“I’d just love to see us progress the love for the game. The joy in the faces again. I have kids myself and I know the joy the game brings.

“I want that connectivity but also to ensure that there is a true and real pathway there that we can be proud of. So any girl out there can be the person they want to be.

“And the pathways are absolutely realising their potential and supporting it. There’s enough will and drive and we’ll work together to make sure that happens.”