Round 3: Connacht And Ulster Play Out Pulsating Draw

Captain Sarah Quin lifted the trophy after Matt Brown’s well-drilled side completed a clean sweep of wins, adding to victories over Ulster (50-5) and Connacht (31-7) in the last fortnight.

Opposing props Lisa Callan and Pearse traded tries during an electric opening spell, the latter swatting away two defenders on a 40-metre surge to the line.

Leinster, who led 7-5 at half-time, had their sights set on an Interpro three-in-a-row, but Pearse, the Vodafone player-of-the-match, was unstoppable from close range in the 61st minute. 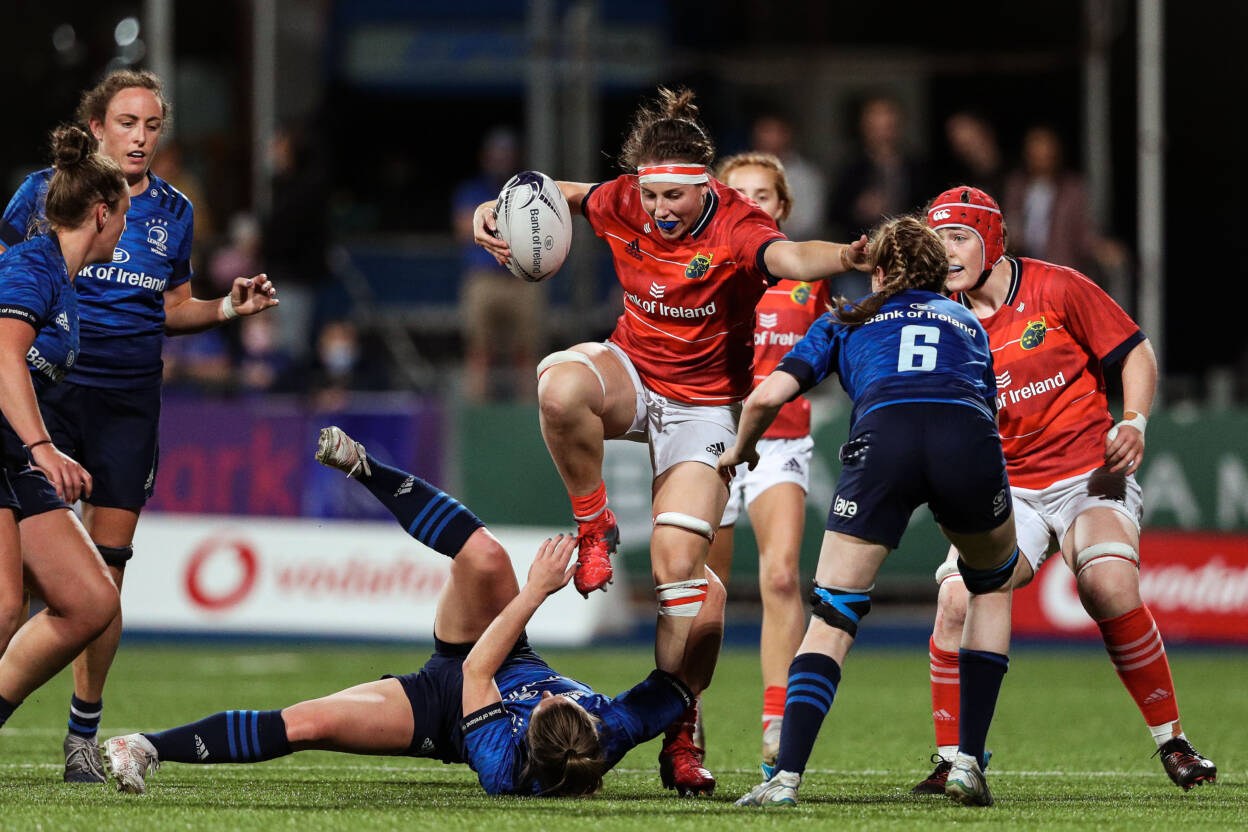 Out-half Nicole Cronin, whose clever kicking out of hand was key, converted and also added the extras – and the assist – to influential replacement Deirbhile Nic a Bhaird’s 77th-minute raid in behind the posts.

With Ireland deep in preparation for the start of the Rugby World Cup qualifying tournament in Parma on Monday, this season’s Interpros were played without the international players.

The last three weekends have shown that the depth is growing under the national team, with a number of youngsters pushing through and previously-capped players like Pearse (five tries in all) and Cronin (26 points) both starring as the top try and points scorers respectively. 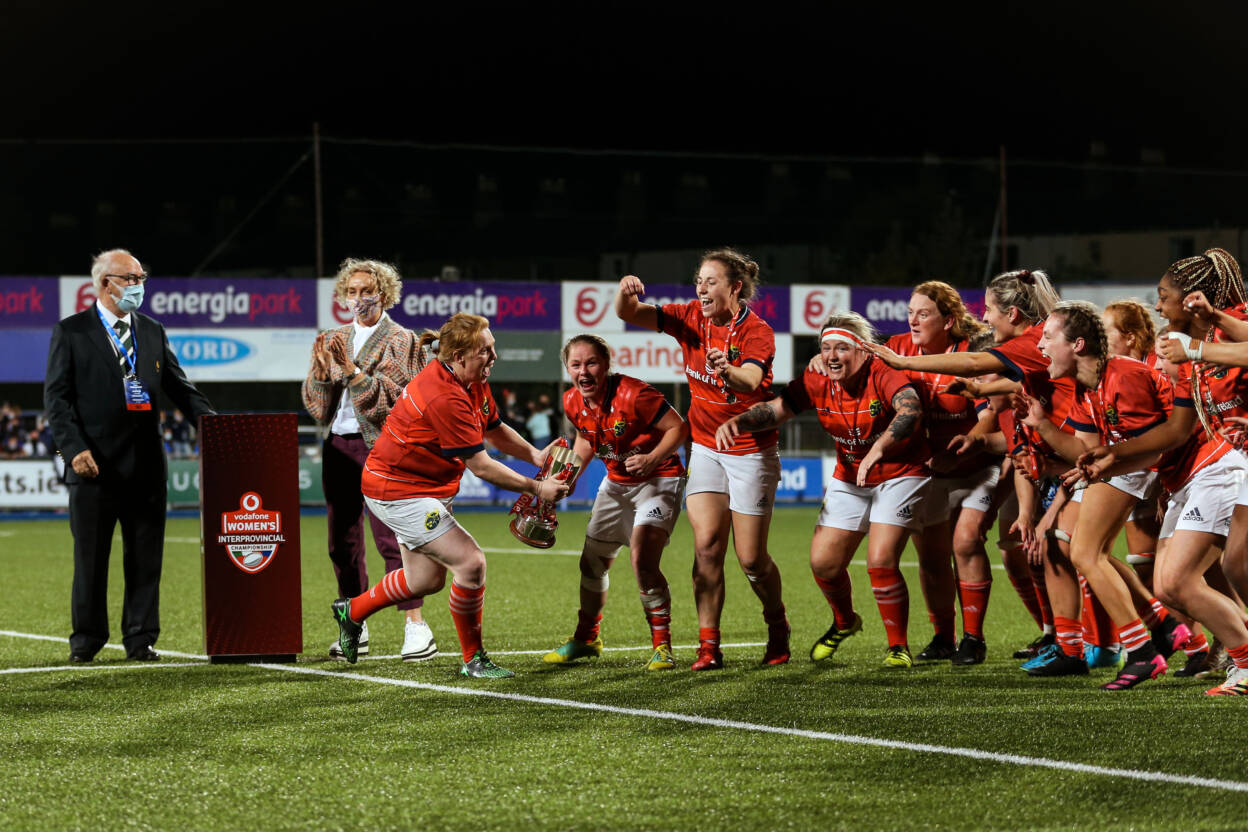 A modest Pearse said afterwards: “If I’m scoring the tries, there’s 14 other people that put me in a good position to do so. They’ve done the hard yards, all I’m doing is dotting it down.

“I don’t care if I don’t score any, as long as we win the Interpros, to be honest with you. Winning this (player-of-the-match) award is nothing compared to winning that (trophy) over there.

“I’m disappointed not to be in Italy (with the national squad), but I’m at home here in a red jersey. The girls welcomed me back with open arms.

“And right now this is where I needed to be and this is what was made for me, and I’m delighted to be here.”

Munster immediately warmed to their task in Donnybrook, young flanker Maeve Óg O’Leary darting up into the Leinster 22 and Muirne Wall keeping the pace high from a quick tap.

A forward pass spoiled what would have been a cracking opening try, Pearse punching through before Clodagh O’Halloran and Stephanie Nunan linked brilliantly but Aoife Doyle’s delivery to Stephanie Carroll drifted forward. 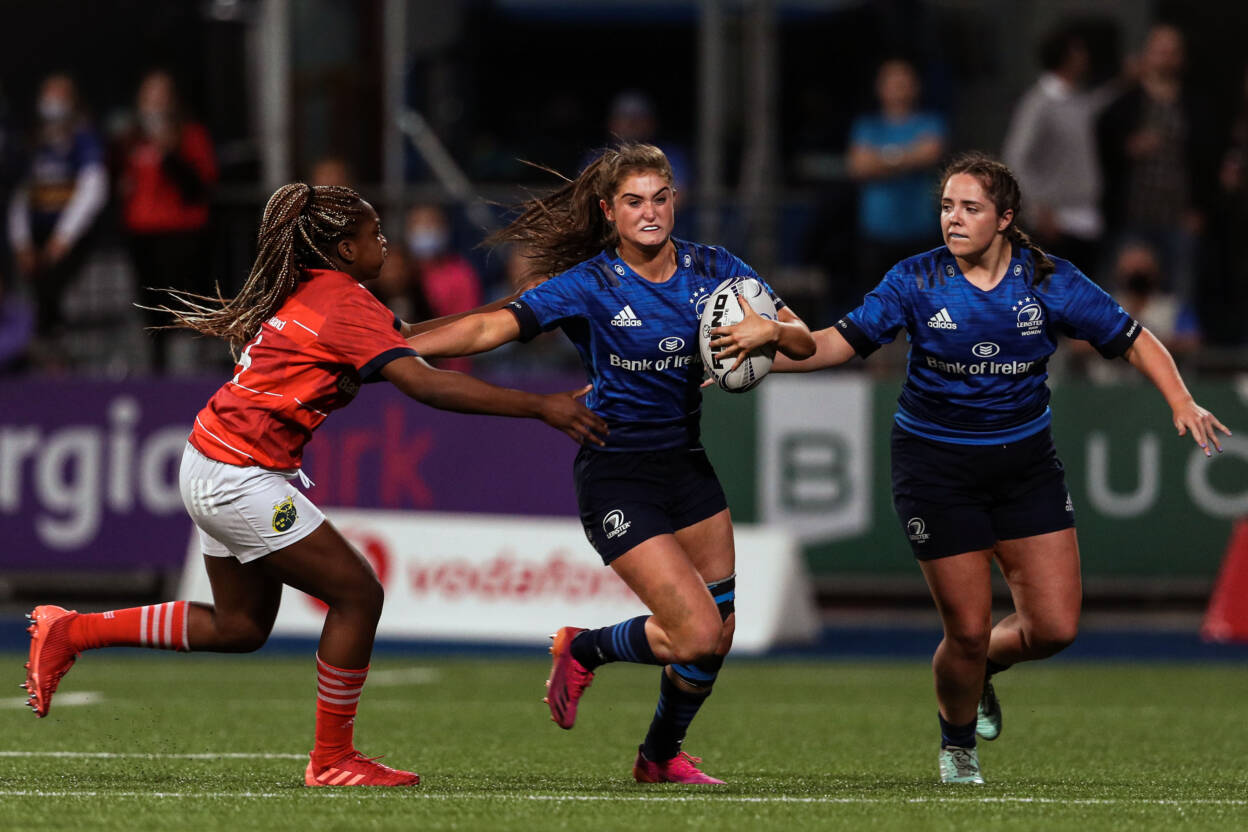 Showing great acceleration, Wicklow flyer Ella Roberts launched Leinster forward but Munster had almost all the possession and territory during the first quarter of an hour.

Having defended smartly, Leinster were clinical from their first serious scoring chance in the 17th minute.

Tapping a penalty, they built serious momentum with Jenny Murphy and Vic O’Mahony making big carries, and Callan had good support from skipper Haney as she barrelled over past two defenders. 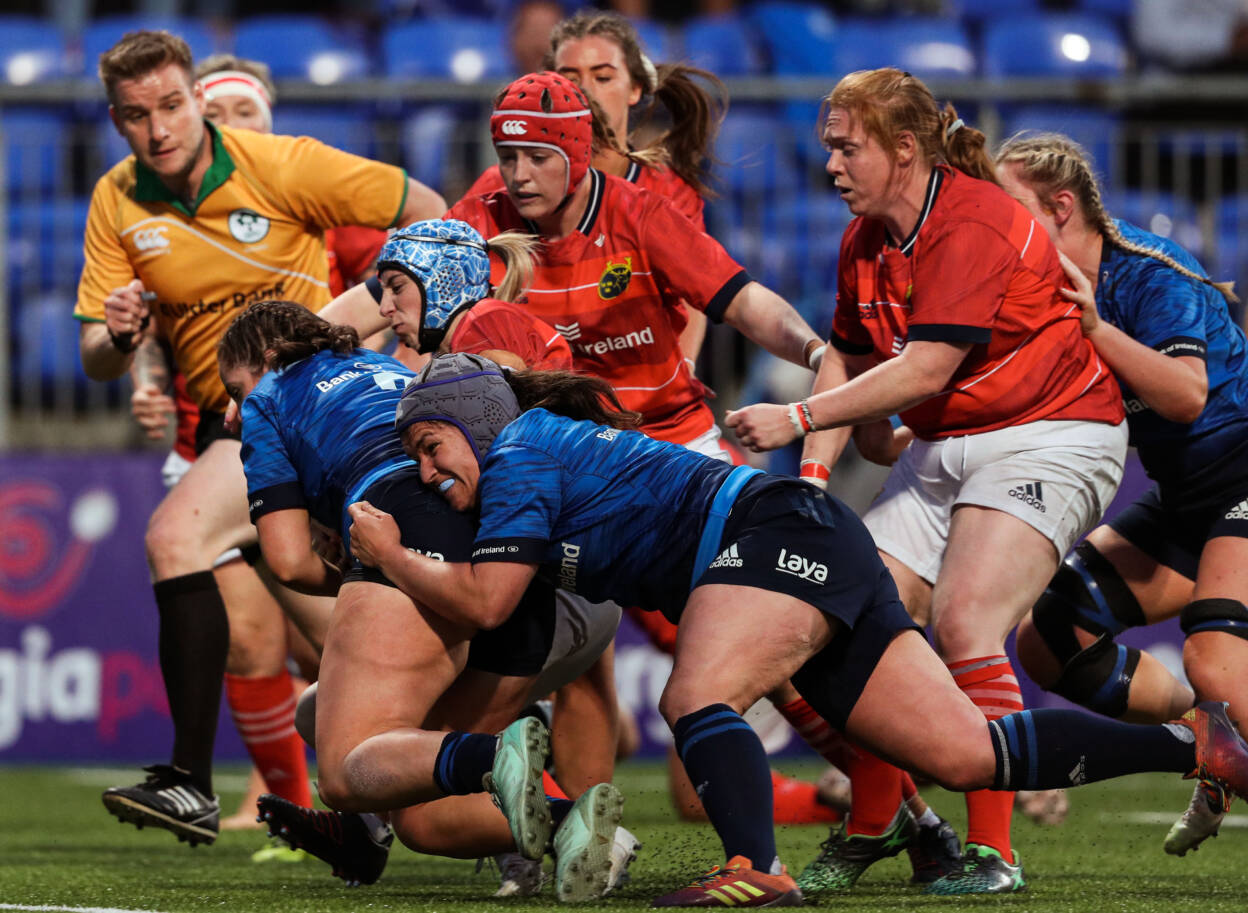 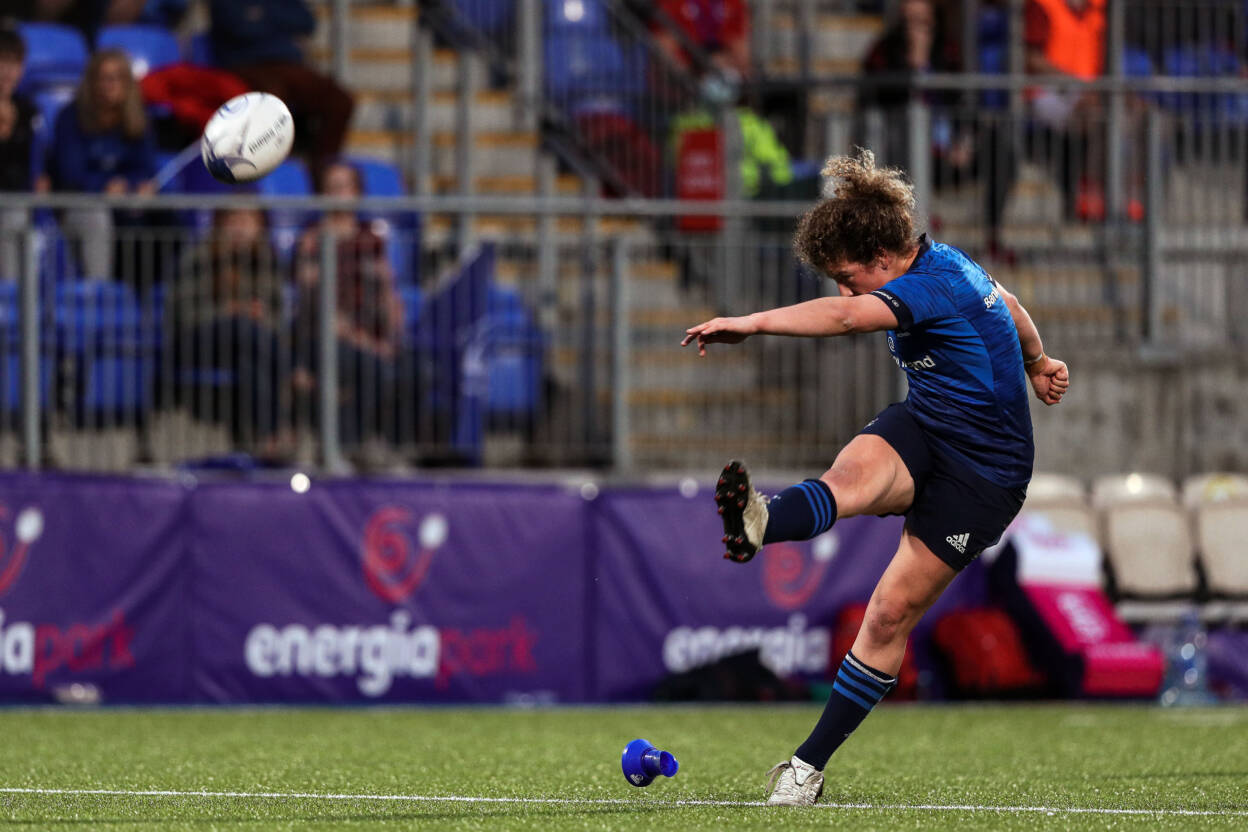 The loosehead’s second try of the tournament was neatly converted by Murphy, yet Munster’s response was telling.

From another quick tap, they tore through with Pearse bouncing off Niamh Byrne’s attempted tackle and evading Lauren Farrell McCabe’s despairing challenge for a fantastic run-in from the 10-metre line.

With Cronin pushing the conversion to the right and wide, Leinster were still ahead at the first water break. Pearse was at her rampaging best, resuming with a bulldozing 20-metre burst.

Having come on for the injured Ali Coleman, Leinster replacement Elaine Anthony was the recipient of a harsh yellow card in the 33rd minute. She was adjudged to have led with her shoulder on Quin at a ruck.

The title holders used some robust defending to keep Munster out of scoring range, approaching the interval, with centre Byrne’s hard work at the breakdown winning them a key penalty.

Number 8 Murphy pushed a penalty wide as Leinster missed out on early second-half points. The efforts of Farrell McCabe and Michelle Claffey, in lifting the pace, had deserved a score.

O’Mahony, the makeshift tighthead, played her part with another well-won penalty at the breakdown, yet Munster were building something themselves – a clever Cronin kick led to a scrum and Chisom Ugwueru gobbled up metres on the carry.

The intense physical effort was beginning to take its toll, with the in-your-face defence forcing regular knock-ons and a ferocious scrap continuing at the breakdown.

Just when Mairead Holonhan appeared to thwart Munster with a lineout steal, Nic a Bhaird responded with a turnover penalty and quick tap, taking the visitors to just five metres out. 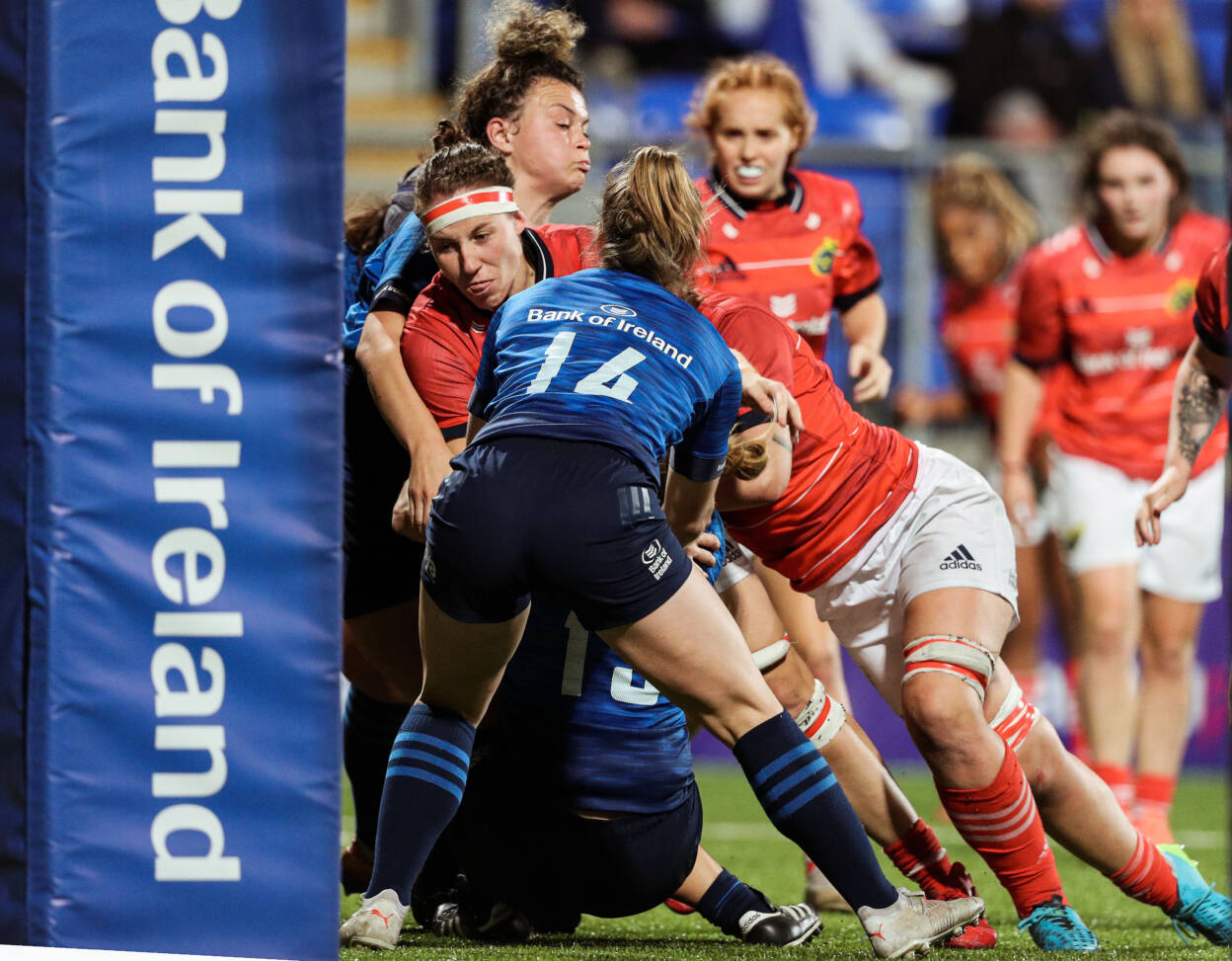 The Munster pack needed no second invitation, O’Leary carrying up closer before Pearse – with Anna Caplice on her shoulder – piled over beside the posts for Cronin to convert, making it 12-7.

There were a number of injury stoppages, with a hurt Murphy bravely playing on, before Cronin was tackled high by the Leinster number 8 who was duly sin-binned. 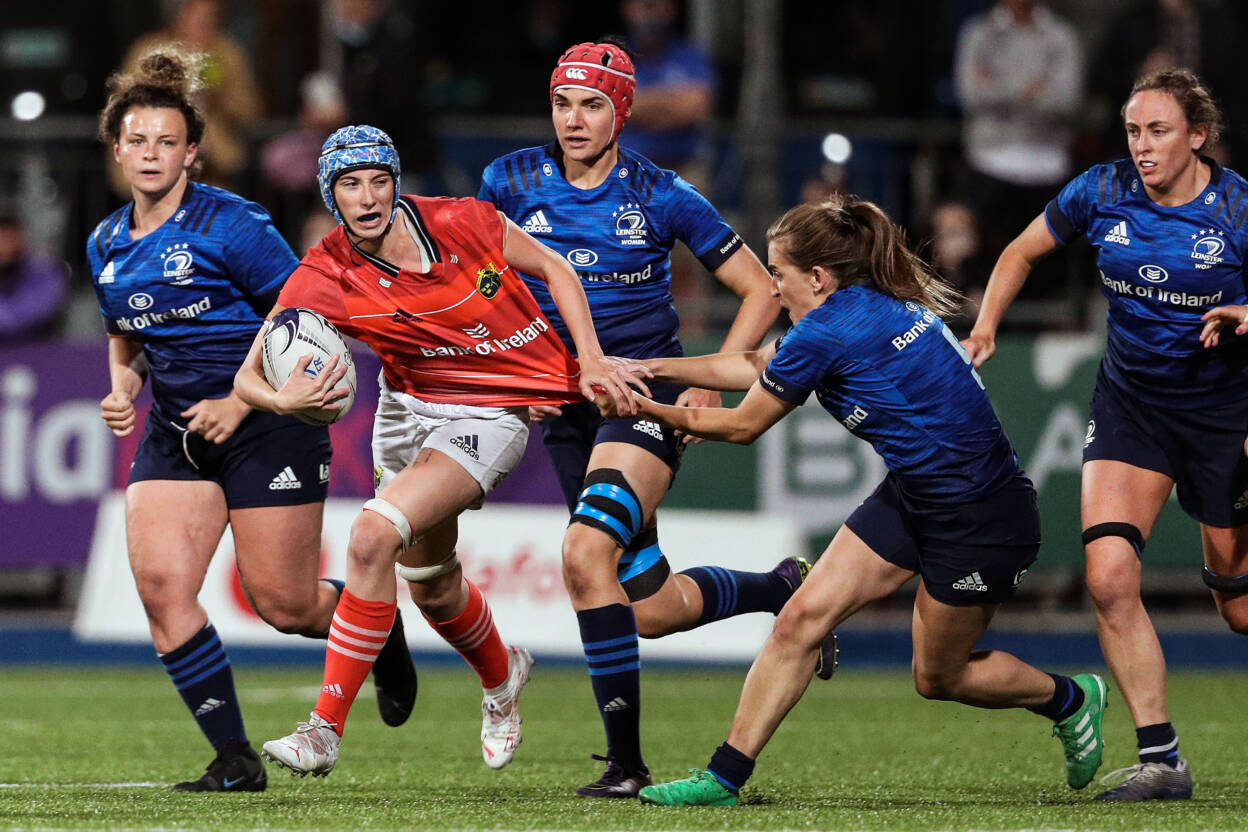 Nonetheless, Munster were able to show their famed mettle and Championship-winning nous to close out a famous Dublin triumph.

Cronin kicked into open territory again, forcing an overworked Roberts to race back again. Doyle led the chase, the penalty came and Caplice opened up the defence from a quick tap.

Munster maintained the momentum, with openside O’Leary making further yards, before Cronin’s inviting pass put Nic a Bhaird in for the clinching seven-pointer.

Speaking after the final whistle, victorious skipper Quin commented: “It feels unbelievable. We waited three years for this. We just wanted it so much. As I said, it was three years in the making. 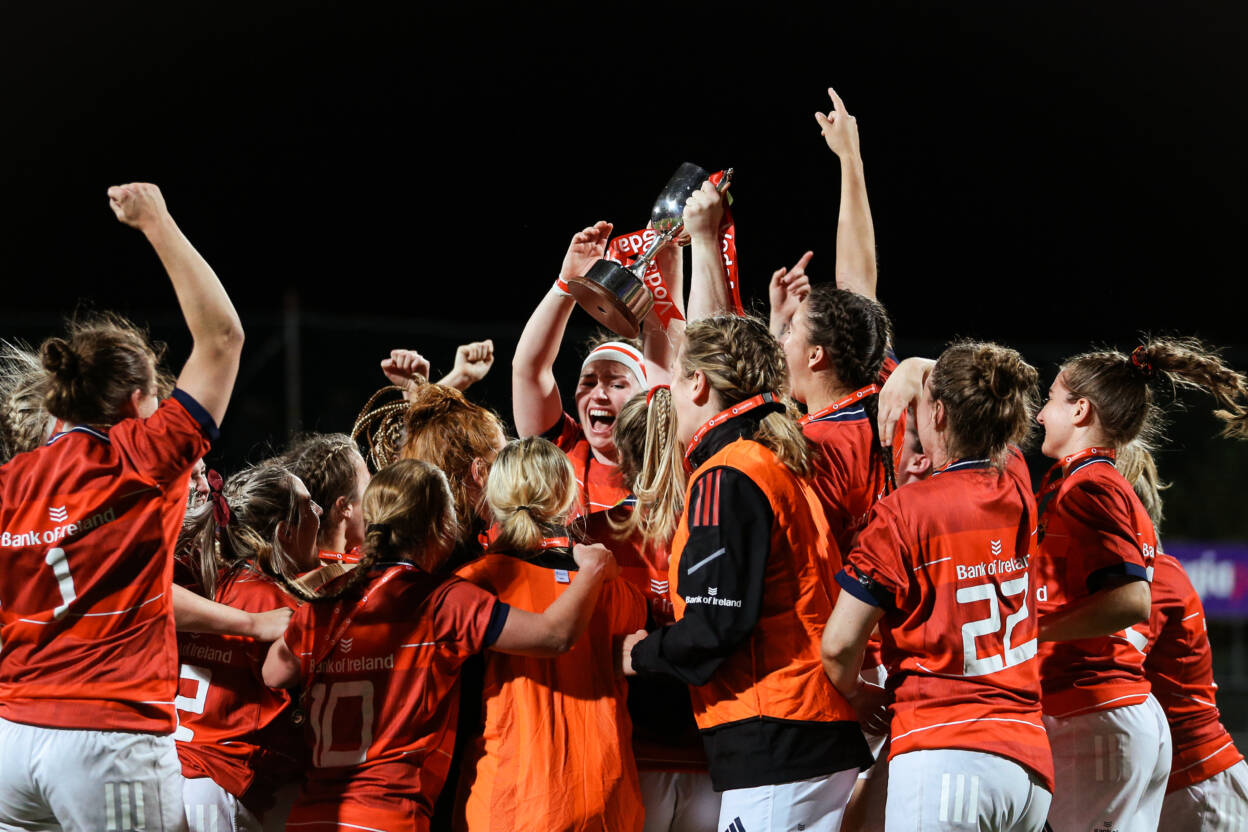