With winning margins between one and 13 points, there was not a lot between the teams during the opening weekend of Division 1B action in the Energia Men’s All-Ireland League.

City of Armagh were clinical in taking their chances as they defeated Ulster rivals Banbridge 20-10 in their league opener at Rifle Park.

Adam Doherty broke through on the blindside of a scrum close to the Armagh line, with the full-back himself converting for a 7-0 lead after just seven minutes.

That enterprise was more than matched by Armagh as they counter-attacked from 65 metres out to put flying centre Shea O’Brien in for a try of the highest quality. Kyle Faloon levelled with the conversion.

What ultimately proved to be the clinching score of the game came 26 minutes into the first half. Winger Matthew Hooks latched onto a Bann pass and streaked the 65 metres to the posts, simplifying Faloon’s conversion.

The full-backs exchanged penalties before the interval for a 17-10 scoreline, with neither side able to achieve dominance in any aspect of play.

The only points of an absorbing second half came courtesy of a Faloon penalty, awarded after Bann had taken a quick penalty just outside their 22 and were then penalised at the following ruck.

Banbridge had arguably the better of the play, both in terms of possession and territory. But in the face of a resilient Armagh defence, they lacked the guile to break it down and reap the rewards for long periods spent in the visitors’ half.

Bann were left kicking themselves when, with Armagh replacement Oliver Millar in the sin bin, they had a lineout pinched just a few metres from the visitors’ line.

Doherty also missed a last-minute shot for a losing bonus point, the freshening wind taking his penalty off target as Armagh prevailed on a 10-point margin.

Giving his reaction afterwards, Bann head coach Mark McDowell said: “Hugely disappointed. We created enough opportunities out there to win it – it’s particularly disappointing that we haven’t taken anything from the game.

“There was some really good scramble defence from Armagh. They were pretty successful at the breakdown, just in terms of being able to slow down our ball. We had five or six line breaks and didn’t finish any of them or score off a resulting phase after them.

“The pleasing thing is that we were creating opportunities – we just lacked the little bit of spark, or sometimes the composure, to finish them off.”

It was Highfield’s doggedness in defence which got them over the line against St. Mary’s College, as a closely-fought contest finished in a 21-17 home win at Woodleigh Park.

The lead changed six times throughout this high-tempo clash, and the Corkmen, who were top of the table when Covid-19 cancelled the 2019/20 season, needed a big defensive stand to prevent Mary’s from picking up a late match winner.

Mary’s were in free-running form, Mark Fogarty and Myles Carey both catching the eye early on but their only reward was an eighth-minute penalty from out-half Conor Dean. 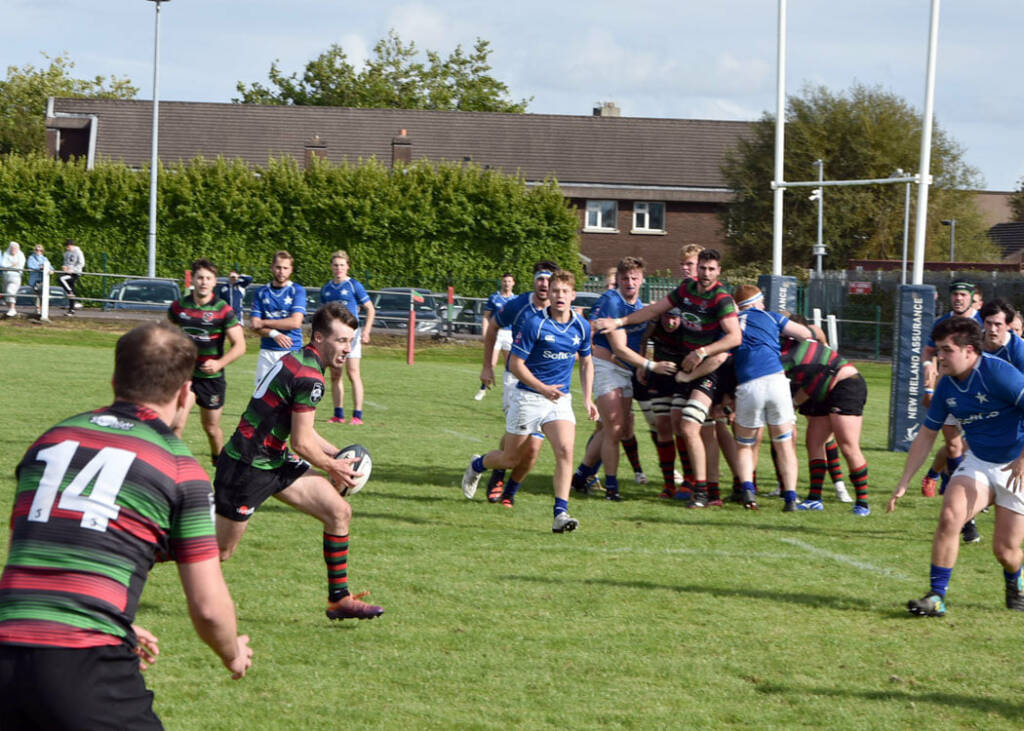 Highfield hit the front just four minutes later, profiting from a Liam Corcoran yellow card. The home pack threatened from a maul before former UCC number 10 James Taylor nipped over for a try which he converted himself.

Mary’s replied near the half hour mark, Craig Kennedy’s break and kick ahead putting pressure back on Highfield. They coughed up a lineout penalty and the Dubliners opted for a scrum.

That decision paid off when the Michael McCormack-inspired front row produced a powerful shove, and number 8 Niall Hurley broke from the back to dive over for a Dean-converted try.

After a missed penalty from Taylor, the Highfield forwards struck just before half-time. The maul was again the platform, and then a series of pick-and-drives led to prop Daragh Fitzgerald touching down.

Taylor’s conversion left it 14-10 at the turnaround, before the second half saw both sides struggle to score from dominant spells in opposition territory. 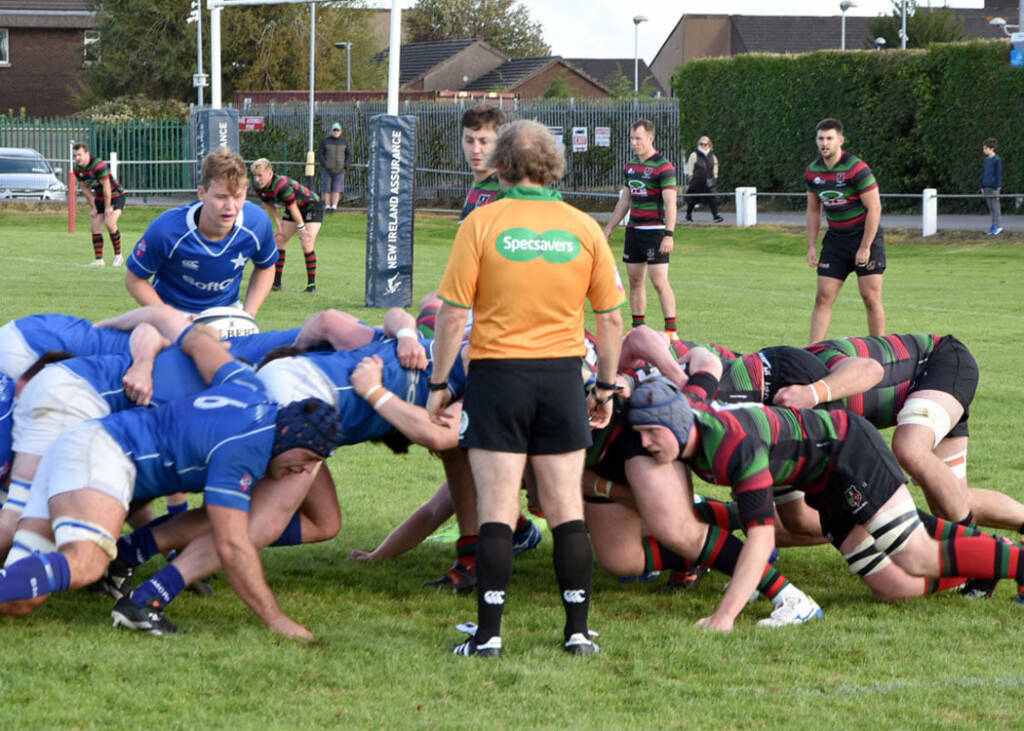 Indeed, it was Mary’s who moved back in front on the hour mark. Off a lineout, their forwards’ hard carrying inched them closer before replacement Conor Corcoran got the ball down. Dean converted.

However, there was no panic from Highfield. Getting back into scoring range, Dave O’Connell took down a lineout ball, his fellow forwards swarming around for a big drive which ended with openside Ronan O’Sullivan touching down.

Taylor topped it off with his third conversion, it was enough to see Highfield home despite a furious late onslaught from Mary’s whose strong scrum forced a series of penalties.

A tremendous individual try from Ulster flyer Aaron Sexton was the highlight of Malone’s hard-fought 30-17 win over a resilient Navan side at Gibson Park.

A mix-up from the restart gave Navan a scrum inside the hosts’ 22. They grasped the opportunity with both hands, a well-thought out move putting winger Sean McEntagart in under the posts for Liam McLoughlin to convert. 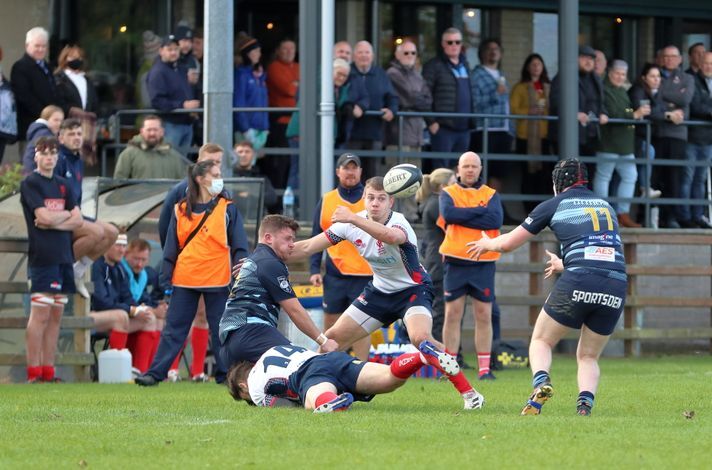 However, penalties were costing Ray Moloney’s men, as winger Campbell’s reliable right boot was successful with two more place-kicks for a 9-7 scoreline.

Malone debutant Sexton, speeding through from his full-back position, needed a kinder bounce as he almost scored the opening try from a kick downfield.

A scrum penalty allowed McLoughlin to nudge Navan back in front, but the Cregagh Red Sox took a 16-10 half-time lead after captain Dave Cave burrowed over from his pack’s late bout of pressure.

Although Malone started the second half without centre Matthew Hamilton, who saw yellow for a deliberate knock-on in a tackle, it was Navan who were being forced to defend. 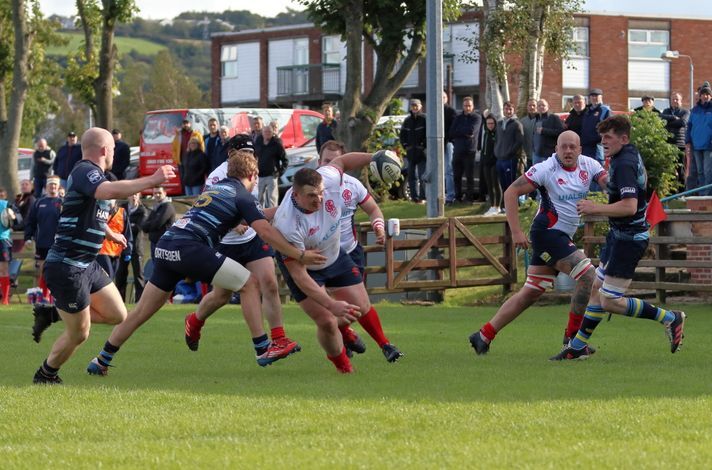 They could do nothing when Sexton went full throttle. He ran a clearance kick back, just inside the Navan half, and took out defenders with a jink here and a jink there before taking off at top gear.

The 21-year-old’s solo score was converted by Campbell, and with Navan’s indiscipline still a factor, Malone pulled off a well-executed lineout maul for hooker Claytan Milligan to cross.

Campbell’s conversion made it 30-10 – he finished with 15 points in all – but Navan made sure to finish on a positive note, with centre Evan Dixon grabbing a try in the last play.