Playing their part in two stellar high-scoring matches, Queen’s University and MU Barnhall are the early pacesetters in Division 2A of the Energia Men’s All-Ireland League.

A last-gasp Ruaidhri Fallon try steered Buccaneers to an exciting 18-16 triumph over Cashel, with proud Pirate Robbie Henshaw watching on from the sidelines.

The Leinster, Ireland and Lions star presented the Buccaneers players with their match jerseys and took in an at times rip-roaring Division 2A clash at a sun-soaked Dubarry Park.

The Athlone side, who had a number of debutants on show, prevailed despite picking up three yellow cards as they gave head coach Kolo Kiripati a winning start in Division 2A.

Having conceded an early three points to Cashel’s Stephen McMahon, Buccs quickly got on the front foot and winger Ross Murphy-Sweeney held off Richard Kingston to score the opening try in the ninth minute.

With Mikey Wilson and Fearghail O’Donoghue, the Ireland Under-20 and Munster Development forward, increasing their influence, Cashel built pressure close to the try-line but Buccs held out.

Chances went a-beginning at both ends before Buccs centre Stephen Mannion marked his AIL debut with a monster penalty to widen the margin to 10 points.

However, having lost flanker Oisin McCormack to the sin bin before half-time, Kiripati’s side endured a difficult spell on the resumption as a McMahon penalty reduced the arrears for Cashel.

Buccs were briefly down to 13 men when tighthead Charlie Ward was yellow carded in the 49th minute. Cashel duly forced a levelling penalty try following the inevitable scrum pressure, just five metres out.

A loose pass saw Cashel blow a two-man overlap, but McMahon’s third successful penalty did edge them ahead. Buccs then lost experienced centre Shane Layden to the bin.

Just when the game appeared to be getting away from them, the Pirates rallied. Replacement Will Reilly’s snappy breaks provided the inspiration, as he made good ground back to the Cashel 22.

Buccs kept the pressure on, and with a penalty advantage, Hanley’s pinpoint cross-field delivery set up Fallon, another league debutant, to outwit the defender, win possession and score the decisive try. 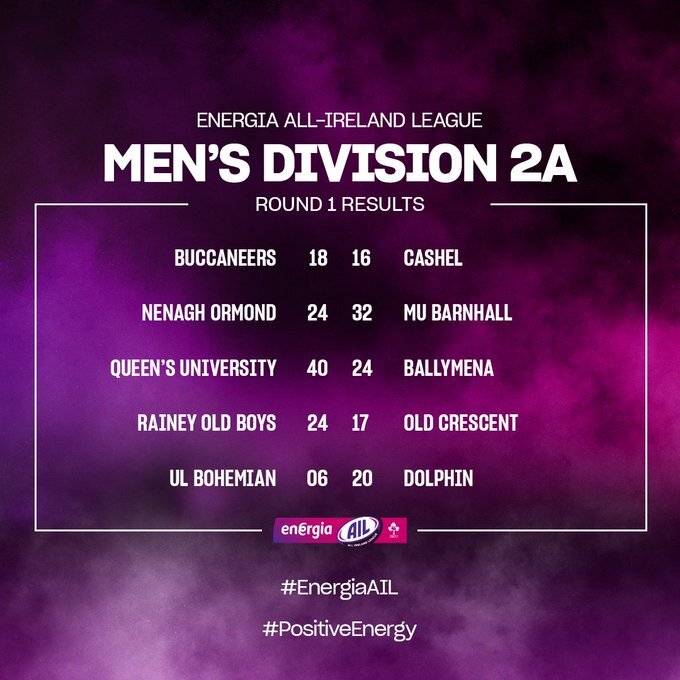 The Ulster derby at a blustery Dub Lane went the way of Queen’s University, their pack catching the eye in a 40-24 bonus point win over Ballymena.

With Ulster Academy half-backs James Humphreys and Conor McKee directing operations behind them, the Queen’s forwards quickly set about their business.

Number 8 Gary Dillon charged clear from inside his own half for a memorable opening try, followed by a close-range surge to the line from prop Anton Lupari.

Ballymena cut the gap to 13-10 after the first of James McCormick’s tries. The Ulster Academy hooker went on to score a well-taken hat-trick but still finished on the losing side.

Strong-running centre Pierce Crowe was another of the Braidmen’s best performers, but scores from David Whitten, who crashed over from a quick tap, replacement Harvey Patterson and Alexander Clarke made it 32-10 by the interval.

Queen’s had made hay when Ballymena suffered two yellow cards, continuing to play at a breathless pace with Patterson’s sidestepping effort and Clarke’s maul try again showing their clinical edge.

Ballymena bookended the second half with tries from McCormick, but in between Humphreys kicked a penalty and Queen’s added a cracking sixth try from deep.

From a missed penalty to touch by the visitors, the sidestepping Stuart Martin tore out of his own 22 with menace. Whitten and the excellent Jonny Hunter provided the support, and the ball returned to Martin who used a meaty hand-off to score in the right corner.

Brian Scott enjoyed a winning AIL debut as Dolphin head coach, with a couple of first half tries setting them up for an encouraging 20-6 victory at UL Bohemians.

Brian O’Mahony and Rob Reardon both touched down at the UL Arena, as well-drilled Dolphin capitalised on Bohs’ errors at the breakdown and with ball in hand. Daryl Foley kicked the rest of their points.

Tommy O’Donnell’s men, who trailed 17-6 at the break, lifted the intensity on the restart but left tries behind them with Colin Ryan failing to put Harry Byrne in under the posts, and the UL pack were also held up late on.

Tries from James Finn and both Kevin and John O’Flaherty were not enough as Nenagh Ormond went down 32-24 to MU Barnhall, the table toppers back in March 2020.

The Blue Bulls hit the ground running at New Ormond Park, releasing league debutant Sean Sexton for a long run to the corner for the opening try in the second minute.

However, following an Adam Chester penalty, Nenagh hit back with two converted scores – second row Kevin O’Flaherty powered over for the first – to lead 14-8.

In a fast-paced nip-and-tuck encounter, a Chester cross-field kick played in Conor Lacey for Barnhall’s second try, before Fionn McGibney replied with a penalty.

The momentum swung back behind the visitors as half-time approached. A penalty try was swiftly followed by a bonus point effort from hooker Cathal Duff, leaving it 27-17 at the break.

The entertainment value was high again in the second half, Barnhall this time facing into a strengthening wind. They had to dig deep to confine Nenagh to just one converted try, nine minutes in.

McGibney missed a penalty to bring the hosts level, and Barnhall showed their composure and experience to close out the result. Replacement hooker Gareth Murray added the clinching try with five minutes remaining.

Early seven-pointers from Cathal Monaghan and Jack O’Mahony sparked the best out of Crescent, but Rainey finished the stronger thanks to tries from Connor Smyth, Rory MacGinty and Jack Bresland.