As he prepares for a potential international debut as a 15s player, Ulster’s Robert Baloucoune has said that playing Sevens rugby for Ireland on a consistent basis helped to shape him into the player he is today.

Having impressed at his local club, Enniskillen RFC, and in his province’s underage ranks, Baloucoune was subsequently added to the IRFU’s Sevens programme under the tutelage of Anthony Eddy.

He went on to feature for Ireland at the Rugby World Cup Sevens in 2018 and was also part of the squad that won the Rugby Europe Sevens Grand Prix Series that same year.

Ireland’s Sevens and 15s set-ups currently include players who the Fermanagh flyer has lined out with in the former code, and it is clear to see how he – and others – have been able to make the transition between both forms of the game.

Speaking today about his development through the Sevens pathway, Baloucoune said: “It was great. I didn’t really go into the Academy or train the usual route. I was playing junior rugby for Enniskillen and obviously a lot of other players would have been at a different standard of rugby.

“It allowed me to catch up and put my skills to the test, whereas if I was playing 15s I would have been stuck on the wing and I probably wouldn’t have gotten much ball. or having to make as many tackles and being involved in the game as much.

“Sevens really drove that and then I was obviously playing with the likes of people that are still there, who are going to the Olympics now (following their qualification last Sunday).

“Like Jordan Conroy and Terry Kennedy, and also boys who are here now (in the Ireland 15s camp). Hugo Keenan and Shane Daly, and boys like that.”

Like so many, Baloucoune was engrossed by Ireland’s performances at the World Rugby Sevens Repechage tournament in Monaco last weekend.

By winning the competition outright, Eddy’s impressive side will now be competing at the Olympic Games in Tokyo next month – an historic first for a rugby team from these shores.

It was unbelievable. I was actually away for the weekend, but I had it on my phone in the car. I was sitting watching most of the games with my friends as well.

“We were all sitting in the same car watching it because it was pissing rain outside! It was really good. It’s an unbelievable achievement.

“Especially going to the Olympics, it’s something you dream for. All the work they’ve put in, to finish off with that game, especially beating France who are a great side. It’s unbelievable.” 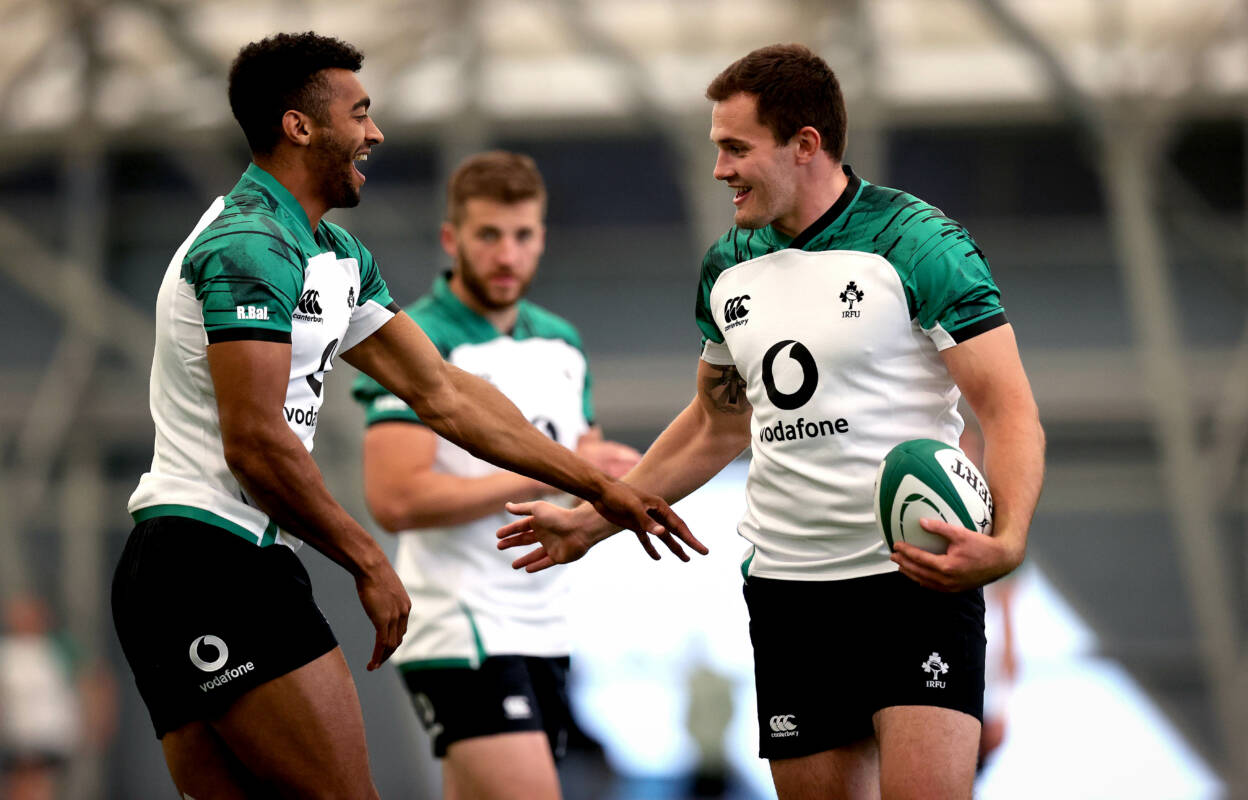 Since moving back to the 15s game, Baloucoune has put himself in the international frame with a series of stand-out displays for his native Ulster. To date, the 23-year-old has scored 15 tries in just 29 senior outings for the province.

He was curtailed by injury for large stretches of the 2020/21 season and had to wait until late February for his seasonal debut. That game against the Ospreys came more than 12 months on from his previous appearance, but the former Enniskillen Royal Grammar School student has made the most of his return.

A run of three tries in seven starts (including five-pointers in two separate games against Leinster) was enough to see him named in Andy Farrell’s 37-man squad for the forthcoming Vodafone Summer Series, which will see Ireland facing both Japan and the USA at the Aviva Stadium.

While he was previously included in the 2020 Six Nations panel as one of four development players – the others were the Leinster trio of Ryan Baird, Harry Byrne and Will Connors – he is understandably thrilled to now be a full member of the Ireland senior set-up.

“It has been good. It’s difficult obviously learning new calls and just getting used to new surroundings, but it’s enjoyable,” admitted Baloucoune.

“Being in a new environment, it’s good to learn new ways and new plays, stuff like that. Every day is going to be a learning day, I think. Especially coming up to these games. 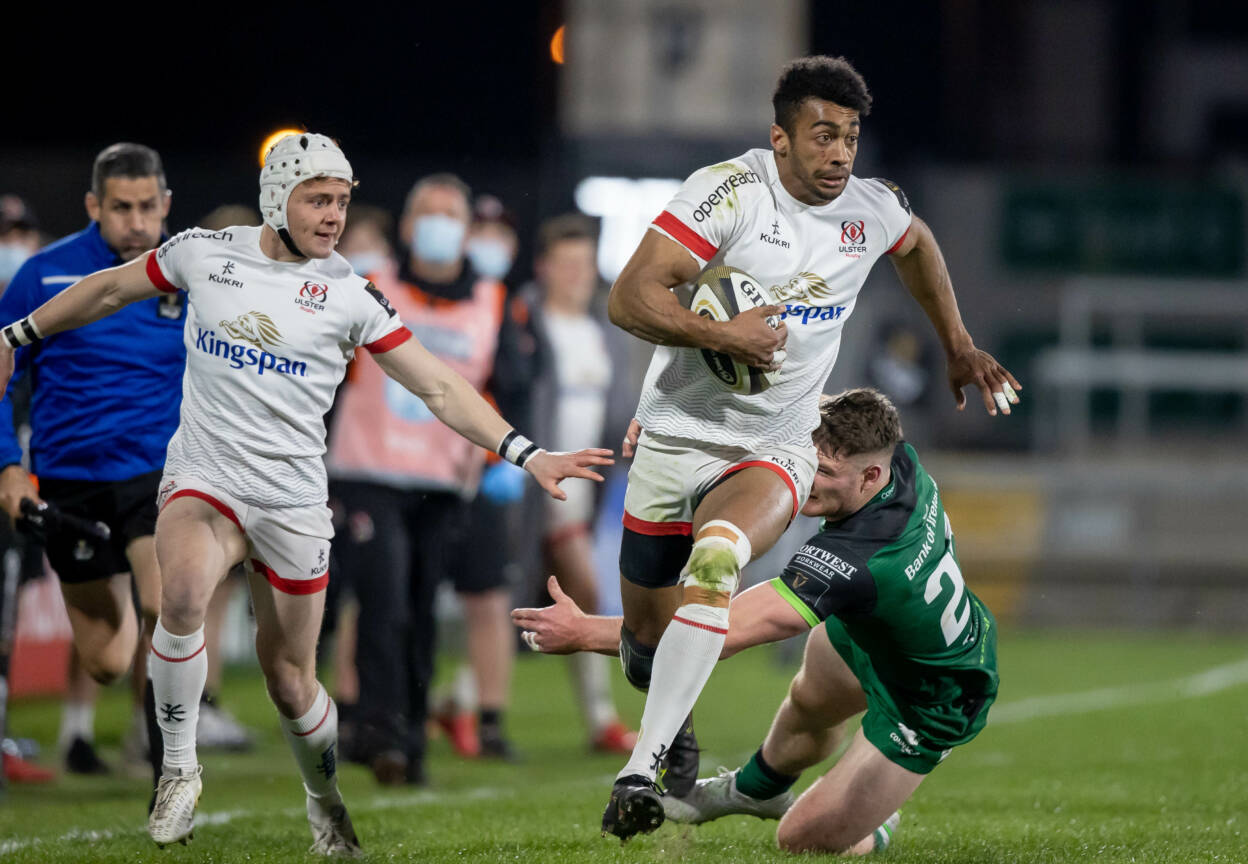 “It’s good meeting boys from the other provinces too and just getting a feeling for everything. I’ve enjoyed it. It has been what I’ve been training for and pushing for in all of my games for Ulster and stuff like that.

“Putting in a performance, it leads to this, and I’m really looking forward to trying and getting my first cap. If that happens in the series, then it would be great.”

Since making his PRO14 debut against the Dragons in October 2018, Baloucoune has constantly looked for ways to improve his game. Even during his extended time on the sidelines, this was the case for the pacy back-three specialist. He explained:

I used to sit quite a lot on the wing and let the ball come to me, whereas I now spend a lot of time with the coaches just trying to get involved.

“Obviously then whenever I was injured, I was able to do a bit more static skills. Obviously I couldn’t walk as much, but I was able to train with my hands.

“Being able to catch it and get the ball away. I think in that way I’ve been able to develop both on and off the pitch.”