In a week where Robert Baloucoune has been named in the Men’s Senior Ireland squad and his old Sevens teammates are vying for Olympic Qualification in Monaco it is fitting to look back on his meteoric rise with Ulster via the Sevens Programme as he is now now on the cusp of a potential first senior cap with Ireland.

Baloucoune enjoyed a breakthrough season with Ulster during the 2018/19 campaign, scoring six tries in 13 starts, and the excitement around his potential increased further when the then 22-year-old was one of four development players included in Andy Farrell‘s Ireland squad for the pre-Six Nations training camp in Portugal in January 2020.

When the season was interrupted by COVID in March 2020 little did he realise that it would be the following February before he would be back on the field for Ulster.  A serious pre-season hamstring injury put him out of action for almost a year.  But eight appearances for Ulster since he made his return against the Ospreys in February has put him back in the frame for Ireland honours.

Anthony Eddy‘s charges are aiming to keep their Olympic dream alive.  It was a dream that Robert shared up until making his breakthrough with Ulster.

Given his athleticism, blistering speed and nose for the line, Robert possessed all the innate attributes to make an impact in the shortened version of the game, but the young winger now credits his meteoric rise with Ulster to the skills he developed and the confidence he gained in the Ireland Sevens programme.

It has been a rapid rise for the Enniskillen native and while his pace and try-scoring prowess have been key reasons for his impact with Dan McFarland‘s Ulster, so too has Baloucoune’s defensive abilities, which he developed and nurtured during his time with the Ireland Sevens under Anthony Eddy, Stan McDowell and James Topping.

In many ways, the Sevens programme helped re-ignite Baloucoune’s career after he had initially left the Ulster system and his move to Dublin to link up with Eddy’s squad was a key moment in the winger’s journey, as he would go on to win six Ireland Sevens caps, including appearances at the Hong Kong Sevens qualifying tournament and the London Sevens, where Ireland memorably won a bronze medal in 2018.

“It was a big jump going from junior rugby with Enniskillen RFC to suddenly training with the Sevens,” he tells IrishRugby.ie. “I remember being quite nervous moving to Dublin initially as I’d be quite a quiet person anyway and I didn’t know anyone in the squad or down there. I wasn’t sure what the future was going to hold so there’s always that bit of apprehension going into something new but all the guys were so good with me and I quickly settled in.”

After building up his fitness and learning the intricacies of the seven-a-side game, Baloucoune’s big moment arrived when he was selected for the Hong Kong qualifying tournament in April 2018. While that week ended in bitter disappointment for Eddy’s side as they suffered defeat in the semi-finals, it was a significant milestone and learning experience for Baloucoune as he won his first Sevens cap.

“Even though it was heartbreaking at the time, the Hong Kong trip was probably the highlight of my time in the Sevens because looking back now I learned so much during that week,” he explains. “I had been training with the Sevens for a while and hadn’t been picked for any of the previous tournaments so to get picked for the biggest one in Hong Kong was a huge confidence boost for me.

“It just kind of showed the training and hard work hadn’t gone unnoticed and had paid off for me. It was the moment I kind of grew in confidence because I’d never played in front of a big crowd before or even in a stadium. To be able to do that gave me huge belief going forward and, as I said, in hindsight it was a massive part of my overall development.” 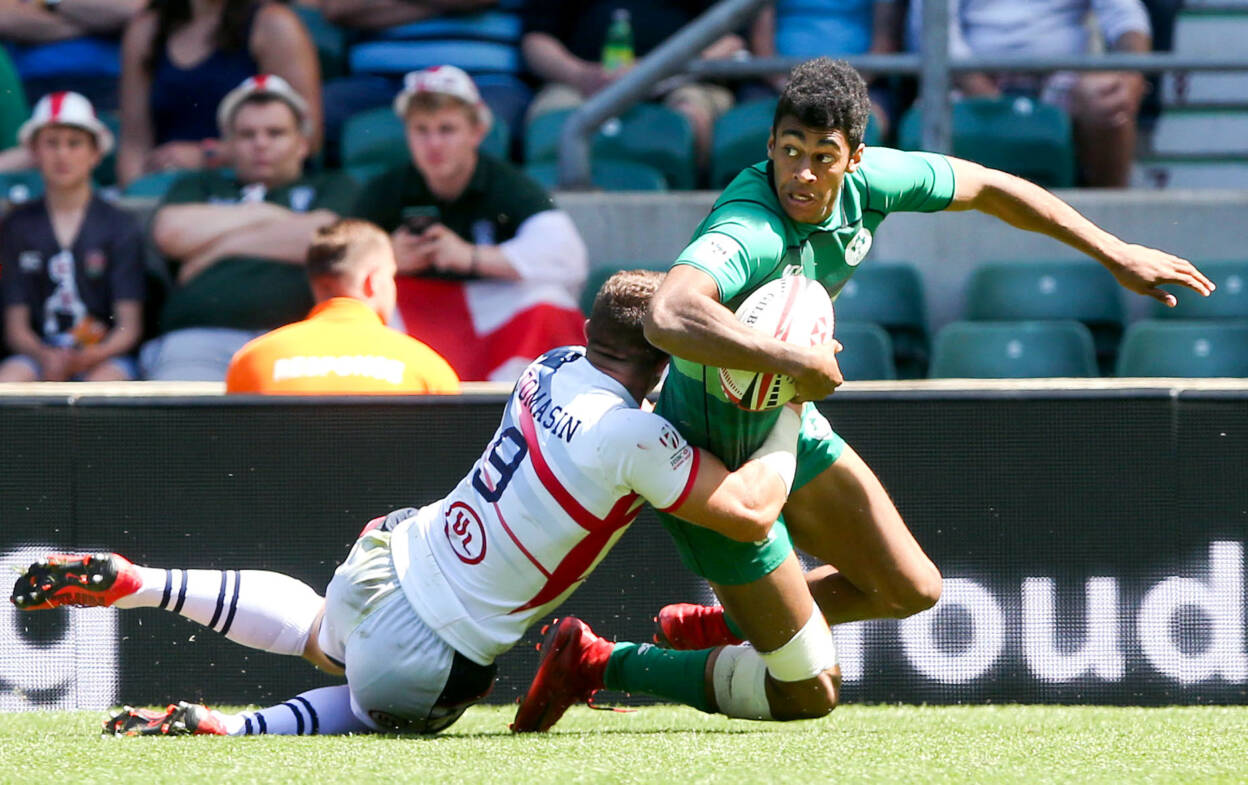 Following Hong Kong, Baloucoune was part of the Ireland squad that made history at Twickenham as they finished third at the London Sevens in their first World Series event as an invitational team, and while he was a travelling reserve at the Rugby World Cup Sevens in San Francisco, that tournament added another valuable layer of experience to the speedster’s CV.

“The big thing for me was the belief Sevens gave me,” Baloucoune continues. “I had never played at that level before so whatever about improving my skills, it boosted by confidence and my self belief. After playing in the green jersey, I believed in myself and believed in my ability as a rugby player, whereas before I may have doubted if I had it in me.

“Training and playing with the lads really accelerated by development and made me work on the areas of my game I knew I needed to work on, particularly one-on-one defending and my fitness. You get put in uncomfortable positions in the Sevens game and in XVs you can kind of stand on the wing and you could get away with not being able to pass it off your wrong hand or whatever but in Sevens you have to and it pushes you outside your comfort zone. That’s what it did for me.”

Overall, Baloucoune featured in six capped tournaments for Ireland, including four Rugby Europe events during the summer of 2018, before he made his breakthrough with Ulster, memorably scoring crucial tries in the province’s Heineken Champions Cup victories over Racing 92 and Leicester Tigers last term.

His transition from the Ulster Academy into the senior team at Kingspan Stadium was made seamless by his experience in the Sevens programme, as Baloucoune brought all he had learned during his time under Eddy’s guidance back to Belfast and implemented into his XVs game.

“I remember thinking my skills just weren’t up to the level of a lot of other guys around because I played for Enniskillen and hadn’t come through one of the big rugby schools,” he adds.

“But playing Sevens completely changed that for me, as it not only developed those areas I had fallen behind in, but it gave me the self-confidence to push on. The more I played, the more I believed in myself and it was absolutely vital for my development as a rugby player.”