As the power of the floodlights dimmed, and the few remaining people inside Cardiff Arms Park vacated their match day posts, three debutants re-emerged from the Ireland dressing room, caps in hand. Stacey Flood, Emily Lane and Eve Higgins had just joined an exclusive club, each making their Test debuts in last month’s Women’s Six Nations win over Wales.

From the madness of a winning dressing room, and the euphoria of a debut occasion, each took a moment on the pitch before returning inside. Here was the start of their Test careers in green, yet the culmination of three individual journeys – involving family, friends, coaches, teachers, friends, team-mates – to this significant landmark.

Flood, Lane and Higgins had also met at a number of staging posts along the way, notably featuring on the HSBC World Rugby Sevens Series for Ireland, but before that coming up through the underage Sevens programme, honing and developing their obvious talents in the seven-a-side format of the game.

To witness them stand Shoulder To Shoulder in Cardiff and get to share that momentous achievement together was a joyful moment, while Amee-Leigh Murphy Crowe – who has been a standout performer on the World Series for a number of years – and Grace Moore, having been identified through the IQ Programme, followed in their footsteps later in the Six Nations campaign, both debuting at Energia Park. 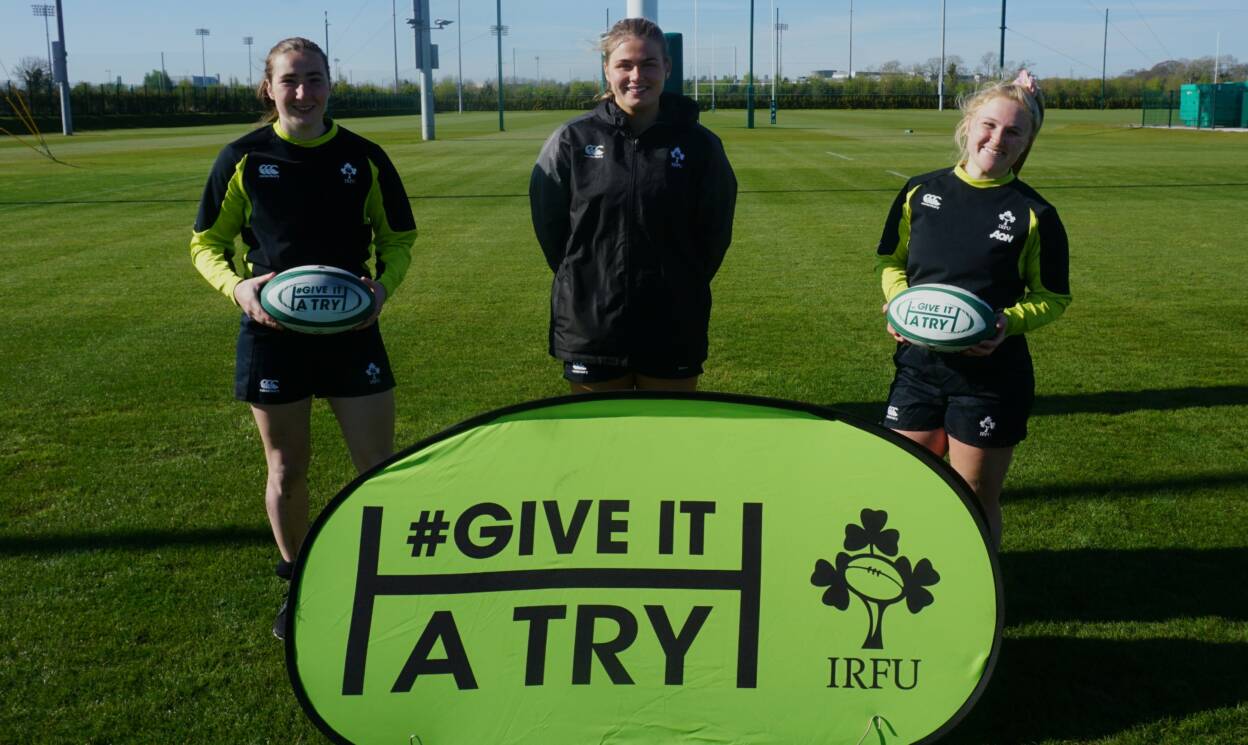 Eve Higgins, Dorothy Wall and Neve Jones launching the Canterbury Give It A Try programme

The emergence of five new caps during the recent Championship, in addition to the strong performances of Dorothy Wall, Beibhinn Parsons and Brittany Hogan to name just three, was a hugely exciting sight and indeed testament to the evolving structures in place in the Women’s game in Ireland.

Whether it is the underage National Sevens Programme, the IRFU Girls X7s Schools Competition or the Inter-Provincial Series, the IRFU’s Women’s Development Pathway system is providing top-level talent for Ireland Head Coach Adam Griggs and the National Team, and the re-launch of the Canterbury Give It A Try Programme for 2021 could not have been better timed.

Following on from the momentum generated by Ireland on the pitch during the Women’s Six Nations, and as clubs around the country return to underage activity in line with public health guidelines, the fifth year of the Give It A Try programme has taken on added significance, with nearly four thousand girls across 167 clubs having taken part since its introduction in 2017. 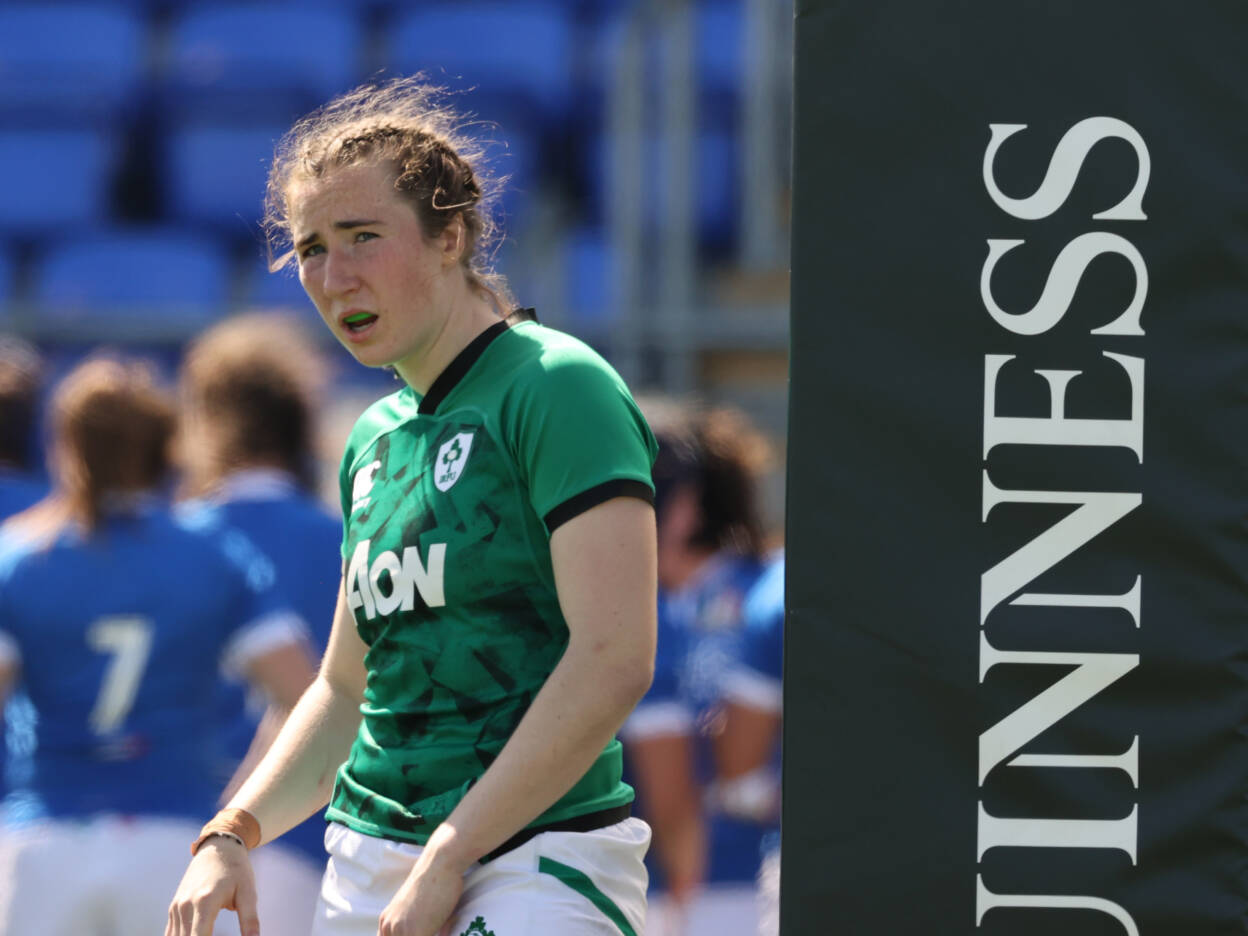 Ireland’s Eve Higgins in action during the 2021 Women’s Six Nations.

Continued investment in developing underage structures in the Women’s game is a key driver in building the playing pool across all four Provinces, and Amanda Greensmith, the former Ireland international and now IRFU Women’s Development Manager, has been central to the exciting growth experienced in participation numbers in recent years.

Having previously been a Women’s Community Rugby Officer with Munster Rugby, Greensmith has brought a wealth of experience to the role, but just as significantly, an innate passion for Women’s rugby having pulled on the green jersey between 2002 and 2007, playing in the Six Nations and at a Rugby World Cup.

While Greensmith certainly takes pride in watching the likes of Lane and Higgins make their Ireland debuts, there is equal pride and satisfaction in witnessing young girls around the country being introduced to the sport through the Give It A Try programme, or through the work of the Women’s Development Officers in the four Provinces.

“Helping players develop is massively rewarding, but so too is introducing players to rugby,” she tells IrishRugby.ie. “You’re always proud of the players who go on to achieve their ambitions, whether that’s with their Club, their Province or with Ireland, but to give young girls the opportunity to get active and try rugby is massive.

“The key thing for me is simply giving someone the chance to find their sport, or find their fit. To say, this is where I feel most comfortable and I’m most happy. It’s that opportunity to be around friends, team-mates and to Give It A Try, because you just don’t know where it will take you, and I certainly didn’t know where rugby would take me either.”

Greensmith’s rugby journey started in her late teens, having excelled on the soccer pitch during her formative years. It wasn’t until the age of 19 that she was introduced to rugby, firstly at Charleville RFC and then with Shannon RFC. A naturally talented athlete with eye-catching speed, Greensmith’s transition was seamless and it quickly became evident that soccer’s loss was very much rugby’s gain.

“Our soccer team was being disbanded because girls had other commitments and were leaving the area to go to college or work,” she recalls.

“I was quite quick so a number of my friends convinced me to come to rugby training with them at Charleville. I remember I said I’d go for one night but then ‘when I hate it, you’ll have to leave me alone.’ I went along, scored three tries, loved it and never looked back.”

Greensmith, a supremely talented full-back spent 13 seasons playing with her native Munster, before going on to represent Ireland over 20 times.

“I’ll always remember my first cap,” she laughs. “It was against Scotland in the Six Nations and my Dad had travelled over to surprise me at the game but the match was switched from Edinburgh to Galashiels at the last minute. I phoned home before the game and I knew from my Mum that there was something up. They had to tell me Dad was actually over in Scotland and he needed to get to Galashiels somehow! 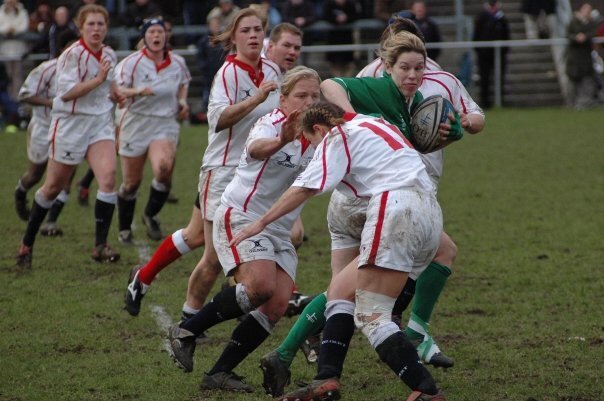 Amanda Greensmith played for Ireland from 2002 to 2007

“Thankfully Rosie Foley’s parents were over and were able to give him a lift up but looking back now, it’s an honour to represent your country but it’s also the connections you make and they’re the standout memories and I guess that’s what drives your passion for the game.”

From a distinctive playing career with Munster and Ireland, Greensmith moved into coaching and refereeing before taking up the Women’s Development Officer role with Munster, and then subsequently being appointed to her current position, working closely alongside Colin McEntee and the IRFU’s Rugby Development department.

“Those years with Munster really generated huge excitement around the Women’s game for me,” Greensmith explains. “When you see first hand the work being done in Clubs and Schools, and the impact that has on young girls, is remarkable. You remember every conversation with a teacher, coach or parent when they tell you one of the girls has come out of their shell, or has never been so engaged with PE or a sport before, and that’s what it’s all about.

“Being part of the pathways that help players get into Provincial and National jerseys is of course fantastic, but there’s also that joy of helping a person find their fit. Be it at schools, club or international level. Providing those opportunities for girls to fulfil whatever their ambition is. That’s our job.”

Greensmith has been involved in rugby in a personal and professional capacity for the last 20 years, and has had a front-row seat to witness the development and growth of Women’s rugby in that time. While acknowledging there is much more to do, particularly because of the challenges and setbacks presented by Covid-19, she is excited and enthused about the progress.

“You can see massive progressions. Even when I started with Munster in 2010 as a Development Officer to when I finished up with the role and joined the IRFU, the landscape is vastly different, and that’s across the four Provinces. There are more age-grade teams, there are more opportunities for girls to take the sport up at a young age and there are so many more strands to the pathway.”

The growth of grassroots Women’s rugby is of the utmost importance to the IRFU and the Give it A Try Programme, supported by Canterbury, is an integral part of this process, particularly this summer as clubs return to rugby. All the details can be found here.

“It has come at a critical time for us with our return to rugby,” Greensmith says of the 2021 Give It A Try Programme. “We did get to role a reduced format of the Programme out last summer in line with the public health guidelines and again this a real opportunity for it to be the anchor in the re-opening of Clubs this summer.

“We’ve set a target of 75 clubs for this year and it’s a great chance for clubs to establish a girls section if they haven’t previously had one or build on the current structures they do have. We want to continue the growth, continue the momentum and get as many girls out playing this summer and beyond as we can – and who knows one day they could be the next Stacey Flood, Emily Lane or Eve Higgins pulling on the green jersey.”