Head coach Andy Farrell has said the excitement is palpable within the Ireland camp ahead of their Guinness Six Nations final round showdown with France on Saturday.

Following last weekend’s seven-try bonus point victory over Italy, Ireland are a point clear of their main rivals in the race to lift the Six Nations trophy on Halloween night.

However, given second-placed England will have already played Italy by the time Ireland take to the field in Saint-Denis, they are likely again to find themselves having to chase down an English cushion.

A second successive bonus point win may be required to secure a fourth Championship in seven seasons, but this just makes it all the more intriguing for Farrell and his squad. He said:

“If that doesn’t get you excited then you don’t deserve to be in a week like this in the first place. We’re three days into the week. We’ve had three great days of preparation.

“It’s making sure we’ve got the back-end of the week right before we get into the battle in Paris on Saturday.”

Despite potentially needing to claim maximum points against a powerful French side, Farrell insisted there will not be a major change in tactics for their final outing of a much-delayed Six Nations campaign.

While it was the boot of Jonathan Sexton that gave them all 15 points in their dramatic success in Paris two years ago, Ireland did manage to register four tries against les Bleus at a packed Aviva Stadium twelve months later.

“You can get four tries and still lose the game. They’re so dangerous. There’s no point scoring four and they score six. We won’t get what we want from that. We’ll stick to the plan and we’ll see how it unfolds.

“Hopefully we can try and put enough pressure on the game to try and open it up somewhere along the line. But it’s a tough old task, isn’t it that?

“We know the French, what they’re capable of. Watching them last weekend, they’re a formidable side. Especially at home. They’ve got threats all over the field.

“The forward pack is one that’s obviously very physical and very forward dominating, regarding go-forward, set-piece wise, etc. There’s a lot of things that we need to make sure we handle, first and foremost.” 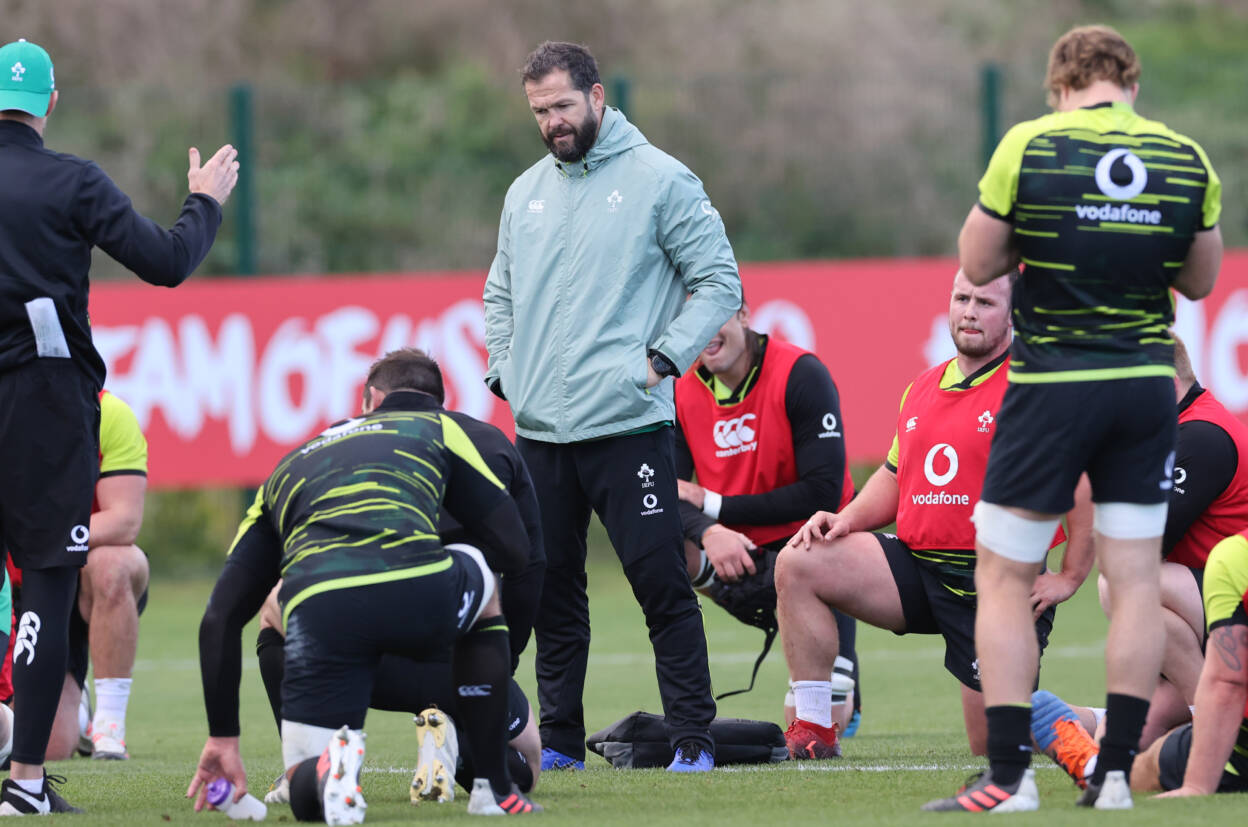 Although this was a relatively straightforward decision, choosing the centre cover on the replacements bench proved somewhat trickier for the Ireland boss.

“Stuart McCloskey and Chris Farrell have both trained excellent. Again, we wanted to look at the start of the week and see how things developed. Robbie has earned the right and Chris comes and slots onto the bench.”

Whereas the player himself is opting for a low-key approach to the game, Farrell was effusive in his praise of loosehead prop Cian Healy in advance of his 100th appearance in an Ireland jersey.

In his capacity as both a defence coach and a head coach, Farrell has witnessed first hand what Healy brings to the table and the hard work that has led to him becoming only Irish Rugby’s sixth centurion.

I think the key word for Cian to describe him is resilience. Like any top player, I don’t think they ever quite get comfortable enough to think that selection is just going to happen.

“What has driven Cian on to be able to get to 100 caps is his fight to want to keep on improving. Over time, he’s understood himself. Understood his body.

“I heard him say to you guys earlier in the week that he was a devilish kid and got away with murder as a youngster. But like any top, top line professional, who ends up getting to this milestone, he has been unbelievably professional in how he has looked after himself. How he has driven himself to try and get to this milestone.

“We honestly feel that it’s an absolute privilege to be involved in this occasion with Cian. I feel unbelievably fortunate that, as a coach, I’m able to select him for his 100th cap.

“I actually feel like a cheat really because there’s far more coaches that have done far more down the line than I have. The group feel unbelievably privileged to be involved in such an occasion with Cian and in such a big game as well.”

It will not just be a 23-man effort this weekend, as a number of extra bodies will be making the trip over to Paris. Due to the potential for Covid-related withdrawals, the Ireland management cannot afford to leave too many of the wider squad behind.

Jamison Gibson-Park’s hamstring tightness in the aftermath of his debut against Italy was a concern, but the Leinster scrum half is deemed fit enough to continue on the bench.

“We’ll be travelling with 31 players,” Farrell confirmed. “You’re allowed 29 to warm up. You need to take a bigger squad with you now, obviously for Covid risk, etc., so you need to prepare and have all bases covered.

“We’l travel with 31 guys. 24 to 31 will be prepared to step in at any given moment. Just like last week, Kieran Marmion came in with us, into the hotel in Dublin before the game. The same thing applies, Marmo will travel with us to Paris.” 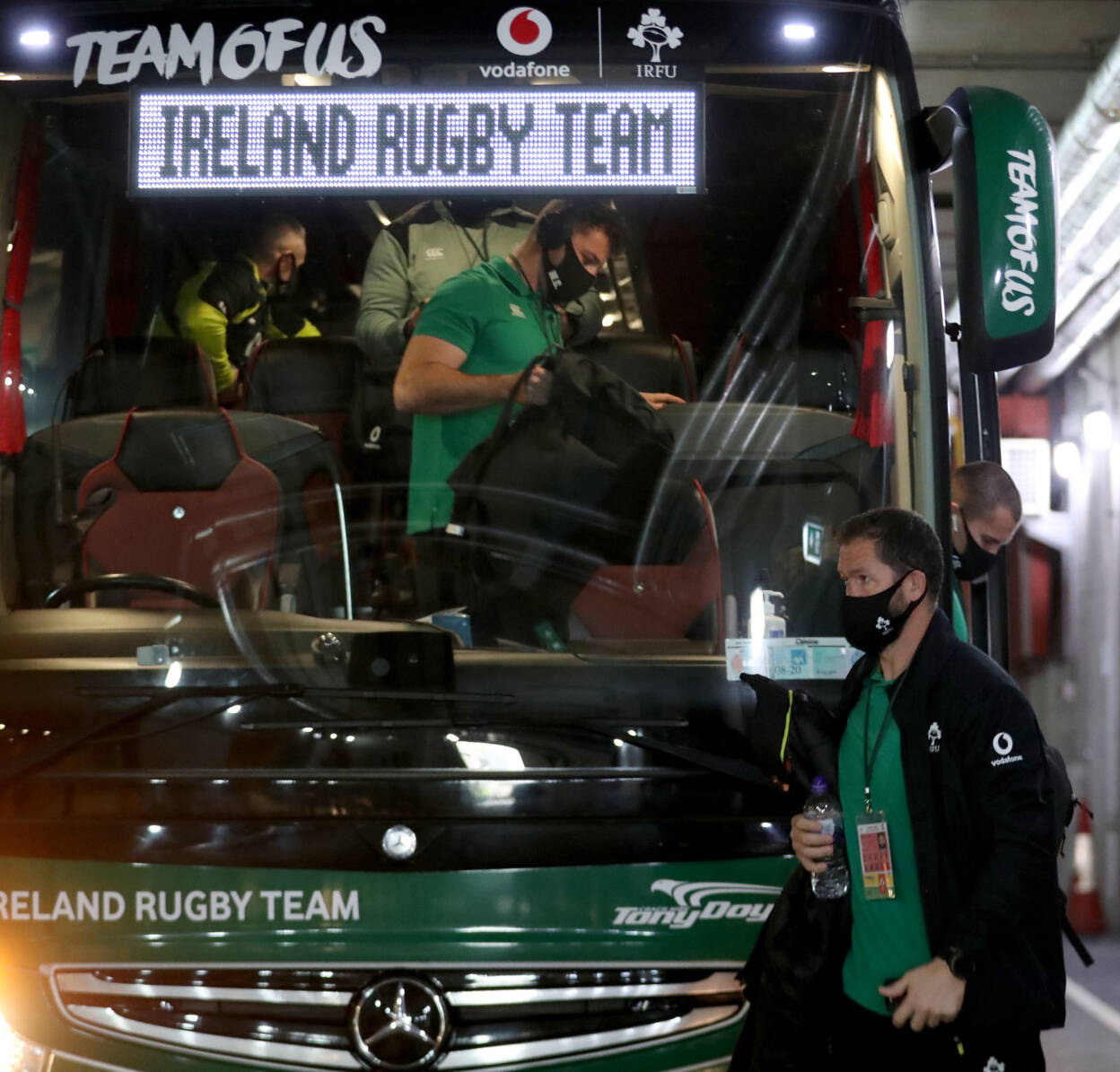 Between his time with England and Ireland – both as a head coach and as an assistant – this is Farrell’s eighth Six Nations Championship in a coaching capacity.

It would represent a fine debut season as an international head coach if he could guide Ireland to Championship success, but the Wigan native is not particularly interested in personal acclaim.

“It’d be unbelievable to even think about it. I don’t know if I’m allowing myself to go there. Just to be involved with this group of lads, this special group…