The back row from the win over Wales remains intact, with Munster duo Peter O’Mahony and CJ Stander combining again with Leinster’s Josh van der Flier. The fit-again Caelan Doris gets a bench spot for the round 3 trip to London.

The collective performance against the Welsh was seen as a significant step up from Ireland’s cagey 2020 opener against Scotland, and Farrell is hoping for more of the same against England, the 2019 Rugby World Cup runners-up, this weekend.

“We had a decent performance in our last outing,” admitted Farrell, speaking at the team announcement press conference. “It was nowhere near perfect, of course. We’ve had a few days to make sure how we get better.

“Obviously we had a fallow week (last week) and we took the lads down to Cork for a good couple of days. We’ve tried to put a few things right and hopefully we can get an improved performance off the back of that.”

Doris returns to the matchday 23 after a head injury cut short his Ireland debut against Scotland at the start of the month. Farrell is backing the Ballina-born back rower to provide the required impact as a replacement.

“It definitely wasn’t a risk (to include him). He’s been fit for quite some time. I think if you look back at the reaction from the rest of the back row, they deserve a start. We’d all like to see Caelan do a little bit more than four minutes and see what he’s got at international level. We can’t wait to see that off the bench.”

Whereas Ireland have fond memories from their last Six Nations visit to Twickenham – a Grand Slam clincher on St. Patrick’s Day in 2018 – the tables were turned when they visited English Rugby HQ for a World Cup warm-up fixture last August.

Eddie Jones’ men produced a powerful display on that occasion to secure a runaway 57-15 win. Yet, given the circumstances that surrounded that match, Farrell assured the assembled media that revenge will not be the primary motivating factor for his squad.

“It was a warm-up game that was two teams of different levels. We had come away from a training camp in Portugal, really hadn’t done any type of contact work whatsoever during that week. It was probably at different levels to which every team is during a pre-season warm-up game. It still stung.

“The performance from England was excellent and we know what they’re capable of, so we don’t look too much into that. Probably the game at the start of the last Six Nations was more of a fairer balance of where they were at as a team.

“Again, (England) started really well, fast and explosive. Used an attacking kicking game to great effect, pinned us into the corners and tried to hit us on the counter. I suppose there will be a bit of that on the weekend as well.” 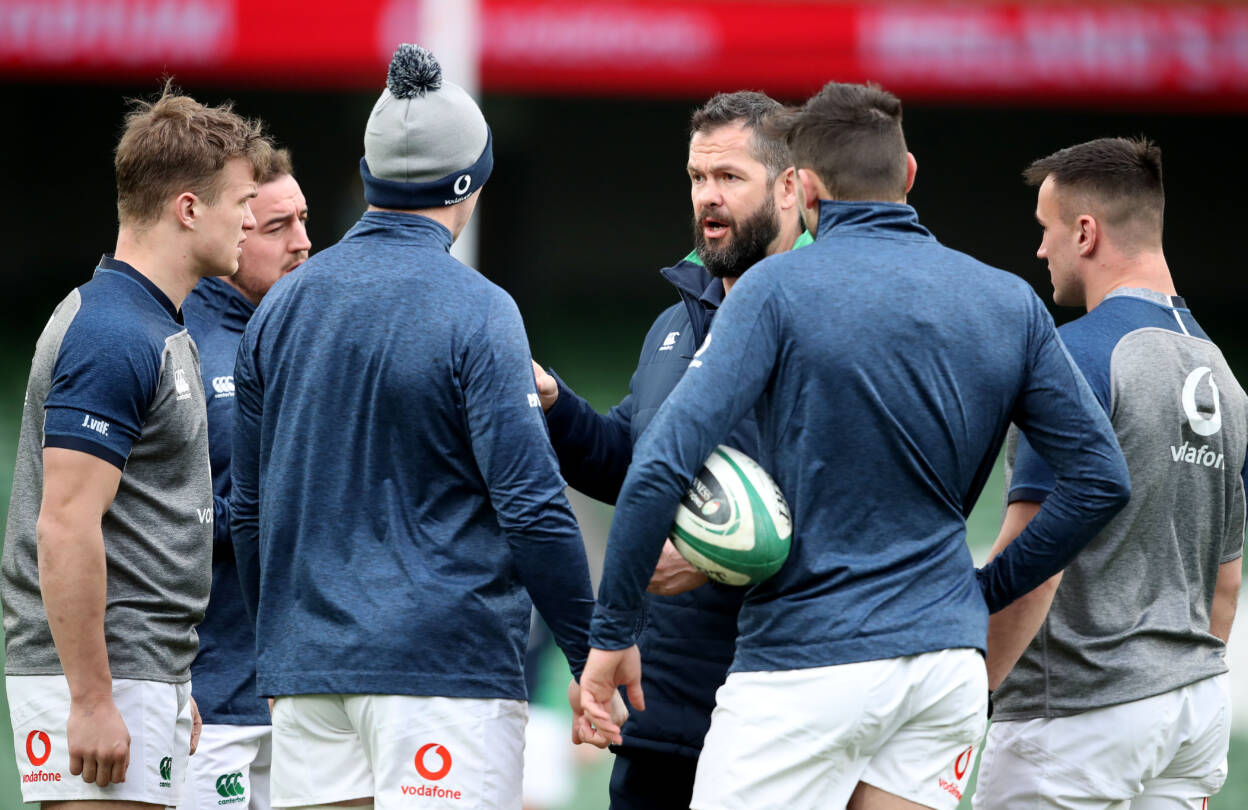 After three Six Nations campaigns working alongside his predecessor Joe Schmidt, Farrell has become accustomed to being in opposition to his son Owen, the England captain who is set to feature at inside centre on Sunday.

Although this will be his first Ireland-England Test as head coach, Farrell senior does not envisage it being any different to the recent meetings between the two teams.

“I wouldn’t say so. No. It’s another big game. I suppose we’ll play this game and the next one will be big as well. That’s what Test match football is all about.

Since taking the reins as head coach of the Ireland squad, Farrell has invited some interesting figures into camp. This week was no different as U2 singer Bono spent some time with the players and coaches at the team hotel on Tuesday night.

Former Munster, Ireland and British & Irish Lions captain Paul O’Connell has also had a notable presence around their training base at the Sport Ireland Campus, and Farrell confirmed that the legendary lock will remain in camp until Friday.

Given all he has achieved in the green jersey – three Six Nations titles, including a 2009 Grand Slam – Farrell believes that the Limerick man is ideally placed to aid their preparations for Sunday afternoon’s eagerly-awaited clash.

“We try and invite as many people as we possibly can. It’s not just Paul that’s been in camp this week, there’s a few other guys. We like people to try and take stock from the outside and get a feel, the feeling of how camp is.

“Paul is here to observe and come into all the meetings. Share his experience along the way, try and connect with the boys. He’s been there and done that.

“He’s been to Twickenham a few times and he’s played some big games, so he knows what the boys are going through. You see a lot more of the boys gravitating towards him during the week and that’s great to see,” he added.