Head Coach Noel McNamara has named his Ireland Under-20 team, sponsored by PwC, for Friday’s Under-20 Six Nations clash against England at Franklin’s Gardens (kick-off 7.45pm).

McNamara’s starting XV for the Round 3 trip to Northampton shows four changes from the side that defeated Wales at Irish Independent Park in Cork last time out, with Ulster duo Ethan McIlroy and Hayden Hyde returning to the team after illness.

In the pack, John McKee comes in for his first start of the Championship at hooker while Mark Hernan’s unavailability due to injury has forced a back row reshuffle, with Dublin University flanker Alex Soroka set for his full Ireland Under-20 debut having come off the bench against Scotland.

Soroka starts at blindside with Sean O’Brien switching to the openside and captain David McCann continuing at the back of the scrum, while the second row pairing of Thomas Ahern and Brian Deeny remains unchanged.

McKee packs down in the front row alongside Clane RFC product Marcus Hanan, who retains his starting place after an impressive display against Wales, and the ever-present Thomas Clarkson, who has now started each of Ireland’s last eight Under-20 Six Nations games at tighthead.

Ulster’s McIlroy, who featured in the opening game win over Scotland, starts on the right wing with Oran McNulty and Andrew Smith continuing in the back three, while Hyde reforms his midfield partnership with Dan Kelly.

Out-half Jack Crowley has scored 29 points in this year’s Championship and partners Lewis Finlay in Ireland’s unchanged half-back pairing, with the fit-again Max O’Reilly, who is also involved in the Ireland Sevens programme, named among the replacements.

Tom Stewart, Harry Noonan, Charlie Ward, Joe McCarthy and Cian Prendergast will be hoping to make a big impact off the bench, with scrum-half Ben Murphy and Tim Corkery completing the matchday 23. 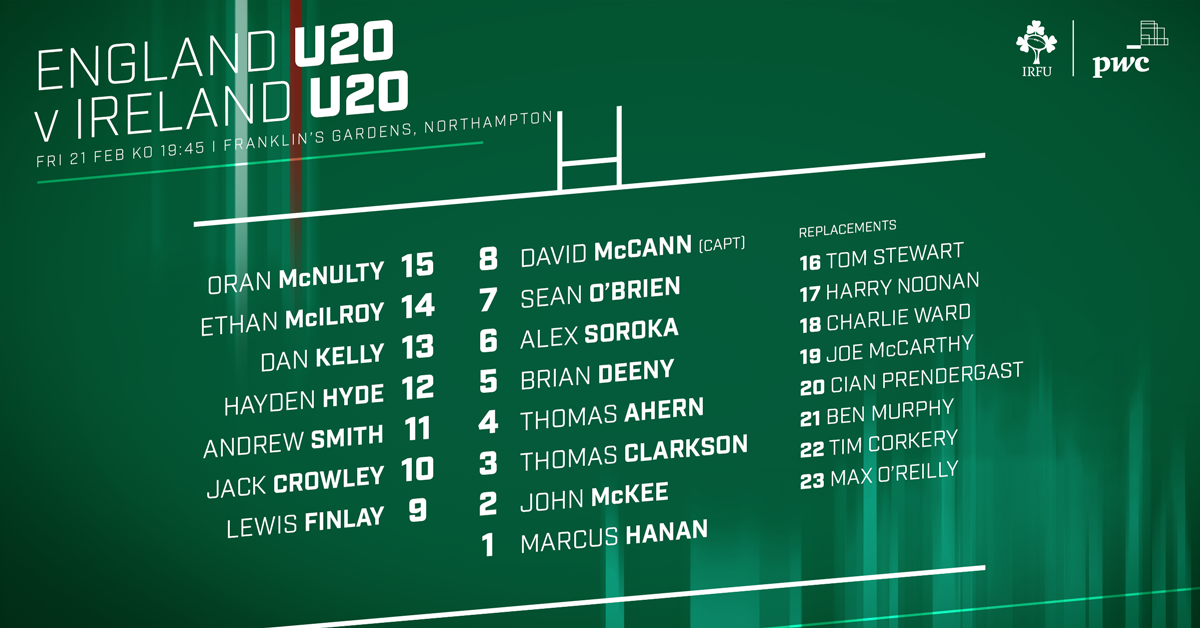 Speaking ahead of the trip to England, McNamara said: “We’re pleased to have won the opening two games, while still recognising that there is room for growth.

“The players are ambitious and they are constantly looking for improvements in their performance, both individually and collectively and that’s the target for Friday night.

“The fallow week was important as it allowed the players to take a breath and recover, as well as review the first block of games and look ahead to this weekend.

“We also had a great session with the Ireland Senior team at our home in Irish Independent Park and are now firmly focused on the challenge ahead against England.”

The Round 3 clash between this year’s two unbeaten sides is live on Sky Sports Mix from 7.30pm, while there will be coverage of the Ireland Under-20’s trip to England across IrishRugby.ie and the Irish Rugby social media channels.

Meanwhile, tickets for Ireland’s third and final home game of the campaign against Italy at Irish Independent Park on Friday, March 6th are available on Ticketmaster.ie.