They may be one of only two unbeaten teams heading into the middle round of Six Nations, but Conor Murray knows that will count for little when Ireland cross the white line against England at Twickenham Stadium on Sunday.

With two wins from two so far, a rejuvenated France and Ireland currently lead the way at the top of the Championship table. Eddie Jones’ England troops suffered a 24-17 first round defeat to les Bleus, before bouncing back with a gritty 13-6 win at the expense of Scotland in a windy and rain-soaked Edinburgh.

Expecting form to go out the window when Ireland clash with the 2019 Rugby World Cup runners-up, Murray said: “It is great that we have two wins and we have those games behind us, but England away, I don’t think the approach would change no matter what way the first games went.

“It is a massive Test match and they had an unbelievable run in the World Cup. They have had a tough opening to the Six Nations. France were really good and that game against Scotland was massively affected by that storm.

“They will be looking to come back home to Twickenham and show people what they are capable of. England are a massively dangerous team and we need to respect that this week.”

If they are to leapfrog France into first place – they are currently second on scoring difference – Murray is hopeful Ireland can channel the spirit of their last Six Nations visit to the London venue in March 2018. Already guaranteed to come away with that year’s Championship title, the Rory Best-led side added a Triple Crown and a Grand Slam to their seasonal haul in a memorable 24-15 triumph.

“That whole week, our attitude and our mindset was really, really good. We knew we had to go to Twickenham and perform. Not necessarily take risks or chances, but go after the game and attack the game. I thought we did that really well.

“I thought our energy was right up there with one of our best performances, defensively. That really helped us in our overall performance. I think before half-time, our decision to run a play – I can’t remember what set piece it was off – but we ended up scoring a try. Jacob (Stockdale) scored with the ‘chip and chase’.

“Just have the willingness to go and chase that before half-time. A lot of teams might have waited until the clock went to 40 minutes and kicked it out. Whereas that day and that season, we backed ourselves, which was fantastic. There are an awful lot of aspects to that performance that we’re chasing.”

As convincing as Ireland were in victory that day, the same was true of England in both of the teams’ 2019 meetings. Having come out on the right side of a 32-20 scoreline in the opening round of last year’s Six Nations, they backed it up with a comprehensive 57-15 Rugby World Cup warm-up success at Twickenham.

Given that the nucleus of both squads remains very much in place, Murray acknowledges they had no choice but to look back on these chastening encounters.

“Two very different types of games. We have looked at them and taken away a bit, especially the Six Nations game. We have touched on that a bit this week,” explained the Munster and British & Irish Lions scrum half.

“A lot of the same players and similar ways of playing and, the summer game, that was a strange one if I am honest. A lot went wrong and you would think that the chances of that happening again are quite slim.

“We focused on ourselves a lot this week as well. Our performances and trying to up them again, be a bit more accurate. We had a lot of chances against Wales in the first half that could have put a different look on the game at half-time. We’re happy with where we are at, but looking to go up another level which is essential against England away.” 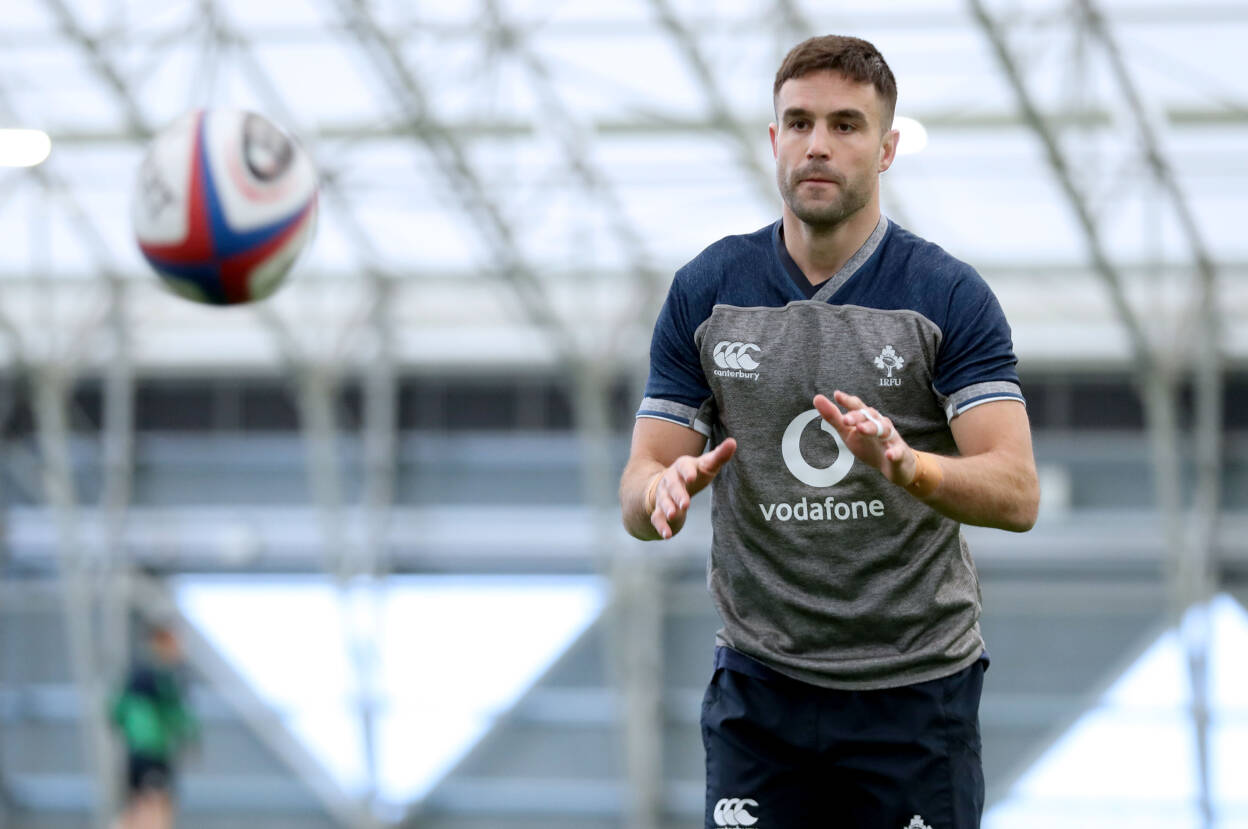 During what is a hectic week of preparation, Murray has been pleased to welcome a familiar face into Ireland camp. One of the Patrickswell man’s former Munster and Ireland team-mates, Paul O’Connell, is spending some time with the squad, his past experience of playing in Twickenham making him a valuable contributor to team meetings.

“I haven’t chatted to Paulie too much, he’s been lurking around! For the lads who don’t know him that well, just to be able to sit down and have a chat with him and listen to him (is great).

“Just getting as much information out of him and knowledge as you can. Just having a guy like that, with the presence he has and what he’s done in the game, is great to have around camp.”

There was another notable visitor to Ireland’s team hotel at Carton House on Tuesday night as U2 singer Bono spoke to the squad in advance of their crunch clash with Eddie Jones’ England.

Murray admitted: “It was just cool to hear him talk about his life experiences and how he views the world. You realise what he has done outside of music, in terms of charity and the people he has dealt with politically.

“He’s just a huge personality and it was unbelievable to hear him speak. An unbelievably intelligent and articulate guy. It was just a really cool evening.”