Ireland Women’s defence coach Kieran Hallett has acknowledged there is definite scope for improvement ahead of their Six Nations second round encounter with Wales at Energia Park this afternoon (kick-off 1pm).

Following last weekend’s 18-14 win over Scotland, Ireland have their sights set on producing another winning performance on home turf. While acknowledging the encouraging aspects of the first round display, Hallett also spoke about the spate of penalties they conceded.

“I think probably satisfied is the word we used most. Satisfied that we got over the line and got the win in the end, but certainly not happy with elements of our performance,” he admitted.

“There’s still a lot to work on going into this week and the next few games. It’s the ideal start really. Get a win and have things to work on is a good place to be in. Defensively, I’m pretty happy with how solid we were overall. We had to defend for a very long period of time.

“We were still making good decisions. I think even in that second half, we only conceded maybe two or three line breaks. I was very happy from that point of view, but it’s our decision-making around the breakdown.

“I think we gave away 20 penalties in the game. That’s unacceptable from our point of view. When you do that, it just gives teams energy. You’re giving them ‘ins’ back into the game. I think that’s ultimately what happened.” 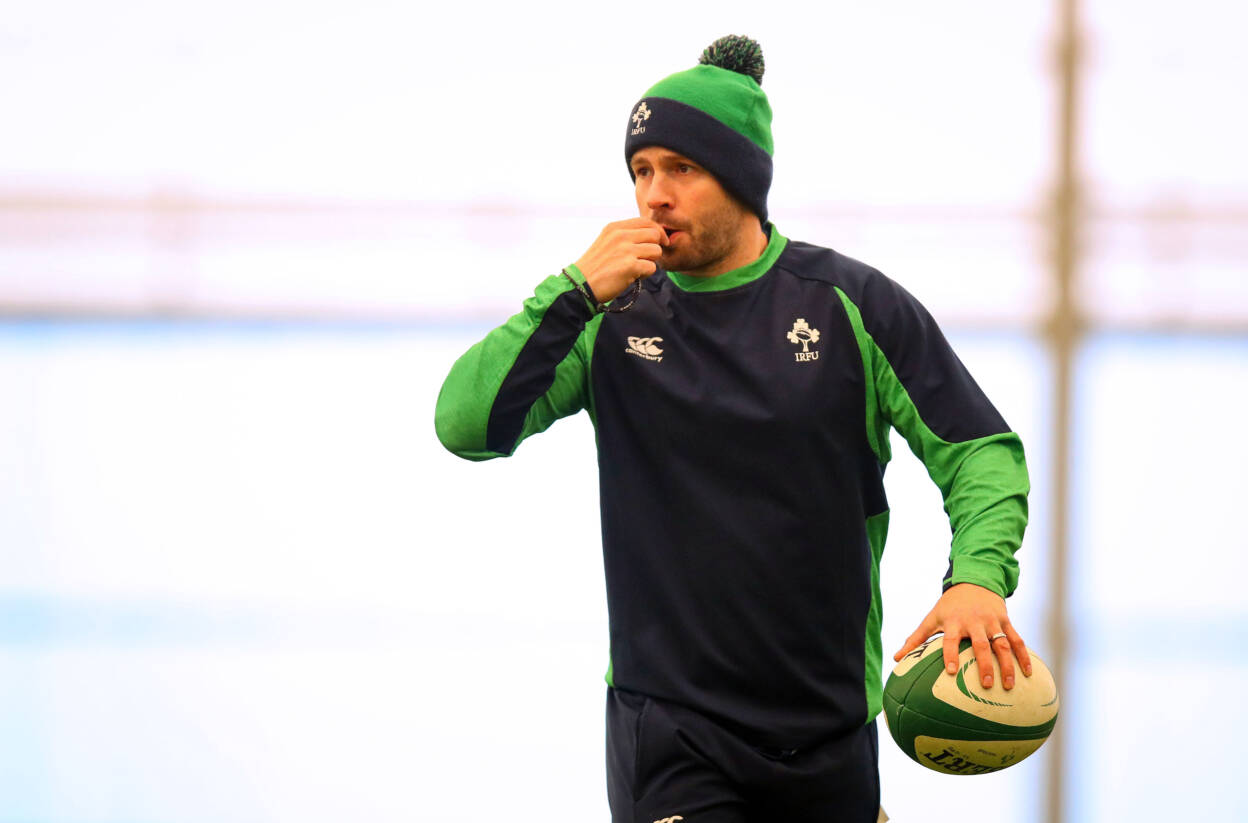 Following a previous stint with the Exeter Chiefs Academy, Hallett joined Leinster Rugby last summer as an Elite Player Development Officer. Leinster teams pride themselves on their ability to play unstructured rugby, and that is something that the former Plymouth Albion head coach is working on with the Ireland Women.

“Certainly from my point of view, I’m trying to bring more of an unstructured decision-making element to the structure. I think you need to have balance, whether it’s attack or defence and just trying to drive that conditioning side with the girls as well.

“Trying to push them to be one of the fittest sides in the world in Women’s rugby. Make sure that they’re able to make those correct decisions under fatigue.

“I think if you look at some of those defensive sets towards the end of the game (against Scotland last Sunday), where we defended for close to 50, 60 minutes at that end point, we’re still making good decisions. From that point of view, we’re making good progress.”

Today’s clash with Wales will see Adam Griggs’ charges come face-to-face with their most familiar opponents. Not including the recent training game between the two sides, they are set to play Wales for the third time in their last four competitive fixtures.

Before falling to an agonising late 15-13 defeat at UCD in November, Ireland also lost out to the Welsh in the final round of the 2019 Six Nations – a St. Patrick’s Day affair at Cardiff Arms Park. As a result, Hallett and the squad know only too well the threats that the Siwan Lillicrap-led side can pose.

“Two teams that know each other fairly well from the autumn. Obviously the warm-up game as well, but we treat it as any other game. We do our due diligence in terms of analysing the game against Italy (a 19-15 defeat) that they played. We’re fully aware that they pose a lot of physical threats.

“Their offload game is very strong and when they’re on the front foot, their attack is incredibly dangerous. From a defence point of view for us, we’re going to have to be on our game to make sure we’re in it.”

A week before their Six Nations bow, the Ireland squad conducted a training session at the IRFU’s High Performance Centre with an added twist. Courtesy of team sponsors Aon, a Family Day was held at the Blanchardstown facility where the family members of the players gathered to watch them go through their paces.

Hallett’s young son Hector was by his side for this special occasion and he felt it strengthened the already considerable bond that exists within the group.

“It was a great idea, it was Adam’s idea. I think it was really powerful having everyone’s family there. The girls talk a lot about what it means to them to be in this environment.

“For them to have their loved ones there and see how they work, away from the glare of the lights on match day, I think was fantastic. My little lad certainly enjoyed himself anyway,” he added.

Despite being born and raised in England, Hallett represented Ireland at underage level as part of the Irish Exiles programme. He was a member of the Ireland Under-21 squad that travelled to the Junior World Championship in 2006.

His main competition for the out-half position in that team was current Ireland captain Jonathan Sexton who, coincidentally, was conducting a pre-match press conference on Thursday in the National Indoor Arena at the same time as Hallett was performing his own media duties.

It was a particularly gifted group that travelled to France that summer, with Sean Cronin, Billy Holland, Sean O’Brien, Devin Toner and Fergus McFadden all still involved in the professional game.

Hallett noted: “There are still a few guys knocking around from my Under-21 days, as it was back then. Myself and Johnny battled it out within the same squad for a year. It seems like a lifetime ago now.”