Ireland Women’s back rower Anna Caplice is hopeful that last weekend’s hard-fought victory over Scotland can act as a springboard for the squad to push themselves to greater heights.

The all-action Caplice has once again been selected in the last line of the pack alongside Edel McMahon – the player-of-the-match in the Scotland game – and captain Ciara Griffin for the visit of Wales to Energia Park today.

This will be the second time that Adam Griggs’ charges have played Wales in Dublin in the space of just three months. Ireland were denied a November win by Keira Bevan’s last-gasp try in a 15-13 defeat for the home side at UCD.

While Scotland threatened to do the same in the closing stages of their Six Nations opener, the girls in green held firm to prevail 18-14. Caplice says they have learned from the mistakes made during that agonising autumn loss.

“That was very disappointing in November but as much as you want to win in every Test, you’ll take the learnings over anything else. Our defensive effort last weekend, we’re very happy with,” remarked the Cork woman.

“Managed aspects of it and also there’s still more to work on and still work to add in and tweak. Things like that. Personally, we all will have gone away and seen, ‘Okay, what can I do better?’, and reviewed that. Then at the same time, work as a unit.

“All the back rows will have been communicating all week about, ‘Okay, did you see this at 1 minute 20 seconds’, whatever it was. ‘What can we do better here?’ There’s a lot of really good, positive conversations going on about how to improve in defence and attack.”

Beibhinn Parsons’ superb 66th-minute intercept try proved decisive in steering Ireland to a memorable win – their first over a Six Nations’ opening weekend since 2017, which also came at the expense of the Scotland Women.

Yet, Caplice believes more can be done to exploit the attacking talents of the Galway teenager and Lauren Delany, who moves to the right wing for the Wales match with the returning Eimear Considine also set to pose a big threat with ball in hand from full-back.

“We’ve reviewed lots of aspects, but I think releasing our wingers (will be key). Giving them a bit more to do this weekend. We’ve some brilliant players on the wing.

“To release them and give them a bit more time on the ball, will get us hopefully on the front foot. Continue that good stretch throughout the first half into the second half and close out the game fully.”

A Zurich Irish Rugby Player of the Year nominee in 2019 (she lost out to Griffin in the end), Caplice joined Harlequins in the summer following a stint back at London rivals Richmond. It has proven to be a whirlwind season so far for the versatile forward, who has played her part in propelling ‘Quins to the summit of the Tyrrells Premier 15s.

She has picked up notable tries for the Barbarians against Wales, and for ‘Quins against Leinster in December’s historic club fixture at Twickenham. As if that was not enough, she has also started working with the Harlequins Foundation as a Development Officer.

“It’s been really good. There’s a real shift and revolution in Women’s rugby over there where you have to provide so many resources to your players in terms of strength and conditioning, analysis,” explained the 30-year-old.

“What I love the most about Harlequins is the player environment and that there’s so many players all looking for the same thing. A high-quality training, rugby and all those resources.

“That’s been really positive for me and I’ve been really enjoying it. As well, I started working with Harlequins so that’s been amazing. I went in at the deep end in Harlequins style of things over there, so it’s been great.

“It was nice to play Leinster, obviously, being from Munster. With the Interpros as well, it’s such a short Interpro season that you get so few opportunities to play against the other provinces. It was just a real cherry on top of a really amazing year for me last year.” 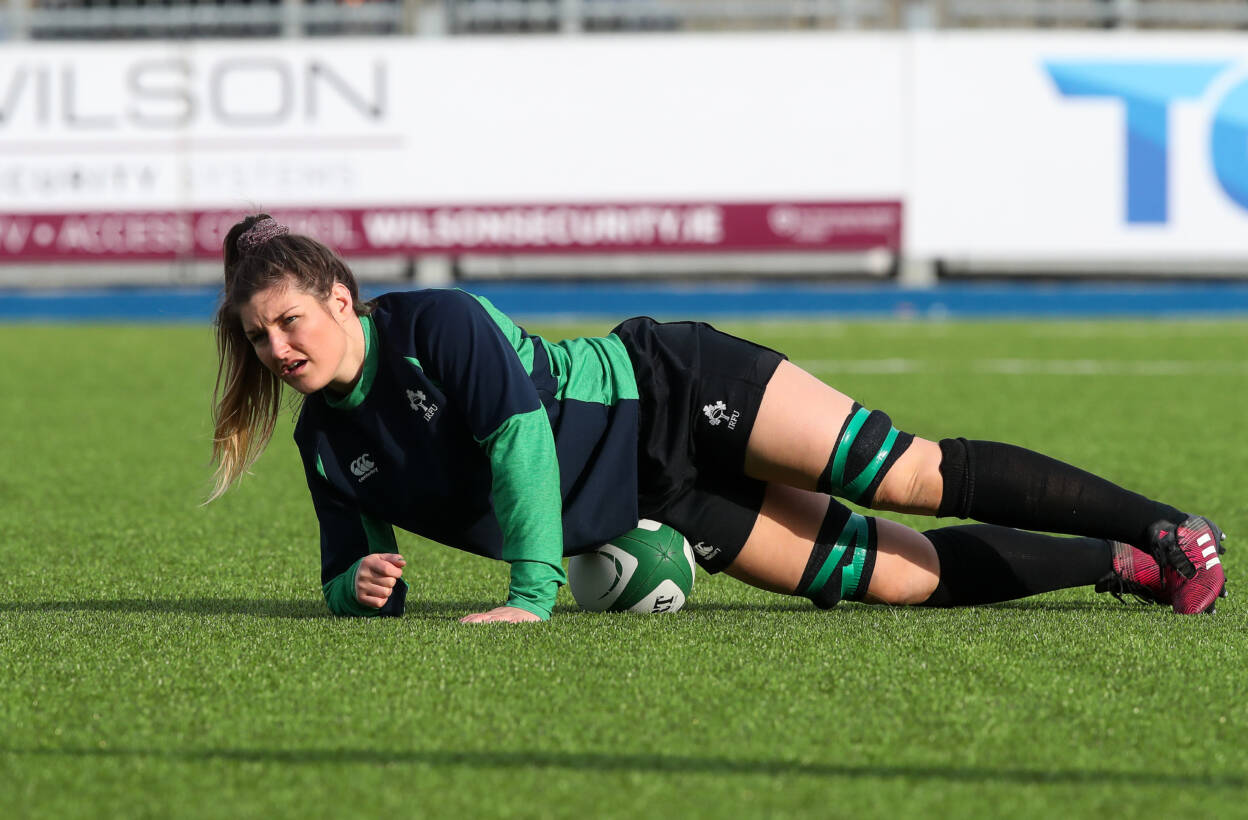 Caplice’s rise up the ranks of international rugby – she made her debut against Canada back in November 2016 – has not gone unnoticed in her hometown of Mallow. As part of a wider Aer Lingus campaign, a mural of her in the green jersey has been unveiled at Albert Lynch’s pub on William O’Brien Street.

Unsurprisingly, she was incredibly humbled to be selected as part of this initiative, saying: “It’s amazing. It was just lovely to put Mallow on the map as well because I started playing rugby in Mallow and obviously went to school there. I played other sports in Mallow as well like tennis, golf, fishing – I was a member of the angling club down there.

“All those wonderful sporting clubs in Mallow, to have someone on the wall now who has represented all of them is hopefully proud for them. Just to see a big version of yourself up on a wall is a bit crazy!”

Additionally, in the wake of last Sunday’s game, a video of a fired-up Caplice belting out the anthems went viral on social media. As she explains, this passion has deep roots for the former UL Bohemians star.

“It comes from when I was younger. Just watching sport on the telly, watching Cork GAA doing well and seeing the players on the field singing Amhrán na bhFiann in Croke Park. I’ll always remember that.

“Just being a proud Irish person and being able to sing that with your Irish team-mates alongside you, as well as ‘Ireland’s Call’. It’s something special so I always try to give it 110%.

“I think the cameras happened to just pick it up a bit more this week! I always belt it out because if you sing it at the higher octave, you’ve to really belt it out. If you sing the lower octave, you can’t sing out. It’s really quiet!

“I always choose the higher octave and just go for it! You get extra pumped from it as well so yeah, I really enjoyed it. Same again this weekend,” she added.