Ireland Women’s head coach Adam Griggs was delighted to see his side taking another step forward in the Women’s Six Nations amidst testing conditions at Energia Park.

Beibhinn Parsons, Cliodhna Moloney, Lauren Delany and Linda Djougang all crossed as Ireland stormed to an emphatic 31-12 bonus point win over Wales. They are level on nine points with England, ahead of their top of the table clash in Doncaster on Sunday week.

“We targeted home wins this year and we’ve got two of those ticked off, which is great,” admitted Griggs afterwards. “I think we made a step up from last week (against Scotland) and that’s all you can really ask for as a coach.

“We showed that 15-20 minute period last week where we were really good and we spoke about being focused and remaining on task this week. Trying to force teams under more pressure and I think for the most part, we did that.”

Although the final scoreline will suggest this was a comfortable victory for Ireland, it certainly was not always plain sailing for the hosts. In stark contrast to the attacking intent they displayed in the first round against Scotland, they were forced to dig deep in defence during the early stages of the game.

That was until Eimear Considine’s clearance kick on the quarter-hour mark got them in the Welsh half for the first time, and teenage talent Parsons stepped up soon after with her superb deadlock-breaking try.

“We were a bit scrappy in our warm-up and it showed in the first 10 minutes, to be honest. We were just that little bit slower to start. The moment Beibhinn scoring that try it kicked us back into gear.

“Where we realised we’re a good team when we’re on the front foot and when we can play rugby. It took us that moment to happen, but I’m pleased that we continued it and actually kept Wales under pressure.”

Despite only being 18 years of age, Parsons has already marked herself out as a force to be reckoned with. She once again displayed her class in this round two clash – cutting in off the left wing before sidestepping her way over the whitewash for an outstanding score.

This was the Ballinasloe youngster’s third successive try in a Six Nations encounter – dating back to the meeting between the same two teams in Cardiff last March. Before introducing Parsons to the senior 15s set-up, Griggs coached the winger in his role as Ireland Under-18 Sevens coach.

He has overseen considerable growth in her game over that period, but admits he cannot take too much credit for what she is starting to produce on a regular basis.

“She’s phenomenal. It’s one of those things, you try and help her with her game understanding and her skill level but the X-factor that she brings is all her. She’s just starting to really grow into her own.

“She’s still got a Leaving Cert to do this year, I’m not sure how she’s going to balance that as well. But over the last couple of weeks, she’s been brilliant. She’s growing into a really fine player, but also she’s far more vocal now.

“She understands the game. She understands what we’re trying to do in our systems. She doesn’t sit back like a young one anymore. She’s certainly one of the vocal players. Knows the standard that’s required and she’s showing it on the field.” 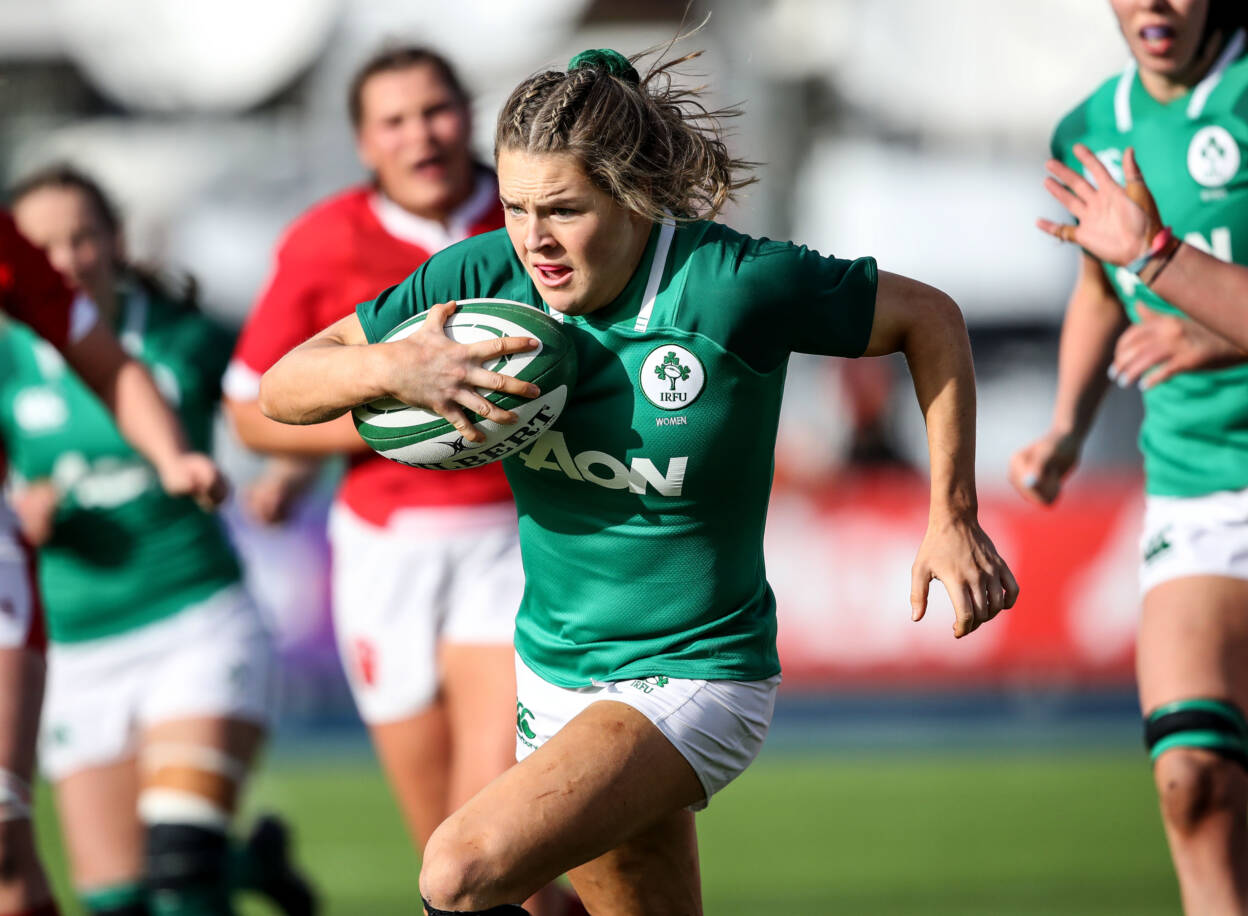 Parsons was not the only Tribeswoman to score for a consecutive week as hooker Moloney – a native of Kilconly in north Galway – also bagged her second try in the space of seven days. After progressing through the return-to-play protocols, Moloney took her place alongside Lindsay Peat and Linda Djougang in the front row.

For Griggs, her try – and subsequent player-of-the-match award – was a fitting way to cap a power-packed 80 minute display. He acknowledged: “Cliodhna was brilliant and she’s another one that’s showing her experience. It’s funny because she’s been in the team for a good few years now but obviously last year, through injury, she was out.

“Last week, she had the HIA that she failed. It just shows how valuable she is to our team. She’s winning turnovers. She’s within our leadership group, she’s driving standards.

Although Storm Ciara did not hit for the opening 50 minutes, torrential rain, hailstones and gale-force wind descended upon Donnybrook during the closing half-an-hour. Having played some impressive rugby up to that point, Ireland showcased their true mettle by keeping the Welsh attack at bay.

Showing improved game management through this weather-beaten spell and adding a last-minute penalty try, Griggs was particularly pleased with this aspect of his team’s performance, especially with the challenge of England looming large on February 23.

“I think it was probably the best I’ve seen us manage a game, to be honest. In the last couple of years, we’ve always shown glimpses of how good we can be but then we might make a mistake and we allow other teams back into the game,” explained the New Zealander.

“Even when that rain and hail came, the girls just knuckled down. They made sure that we tightened up, we weren’t going to do anything stupid. Obviously it was going to be hard with the handling, but for the most part, I thought it was a really, really satisfying way for us to see the game out.

“It shows that we’re growing as a team. It’s not always going to be front-foot football, giving it to Beibhinns and Lindas and scoring tries. You’re going to have to dig in and no more so than the challenge we face against England in a few weeks’ time.”