As one of seven surviving members from last year’s Grand Slam-winning squad, you’d be forgiven for thinking Brian Deeny has had to take on greater responsibility in the Ireland Under-20s set-up.

Yet the versatile forward insists the newcomers to Noel McNamara’s underage group are more than capable of fending for themselves.

“There’s a lot of lads coming from the school system and it’s their first year, this year. They’re very good leaders as well. There’s no huge responsibility on the shoulders of any of the lads that were here last year, because everyone is taking the weight off it,” Deeny insisted when he spoke to the assembled media at the IRFU High Performance Centre this week.

“We’ve not forgotten about last year, it’s still in the back of our minds. We’re just focusing on ourselves this year and focusing on what we can do. How our Six Nations campaign is going to go.”

2019 was a significant year of progression for the Wexford town native. He appeared off the bench in the Six Nations encounters with England and Italy, helping Ireland to get over the line on both occasions.

Disappointment initially followed when injury ruled him out of the subsequent World Rugby U20 Championship in Argentina. At least that was until back row pair Ciaran Booth and David McCann suffered their own setbacks, propelling a fit-again Deeny into the frame for a 5th/8th place play-off against England.

While they couldn’t replicate their previous victories over their cross-channel rivals in the Six Nations and the World Cup pool opener – they lost 30-23 on the day – Deeny enjoyed a strong impact during a 20-minute cameo in the Irish pack.

After charging down an attempted clearance by England’s Sam Maunder, he raced clear to claim a magnificent try. For Deeny, this score was a welcome bonus following his late call-up to the squad.

“I don’t think it was so much the try. It was just the fact I got the chance to go back over. I remember I was devastated, I think it was the last training camp before they went over and I tore the ligaments in my ankle,” he recalled.

“It doesn’t really hit you until you go home and you get told how bad it actually is, that you think you’re not going to get the chance to go over. Then I was just lucky that I recovered quick enough and then the chance popped up for me to go back over. 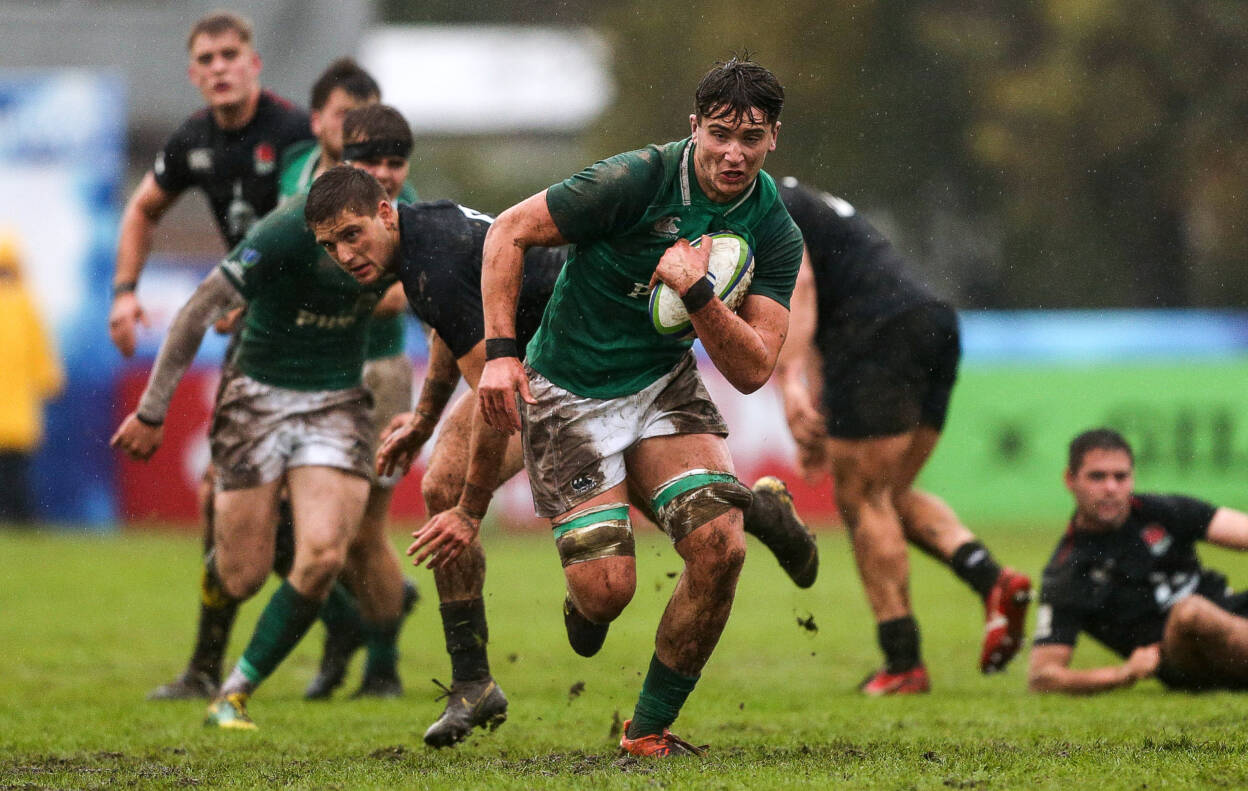 “I was just happy to be on the plane going over, knowing that I had recovered well and knowing that I was in a good space and mind to go. I did my best when I was over there. It wasn’t so much the try, it was just being there.”

Like fellow Slaneysider Tadhg Furlong, Deeny comes from a strong GAA background. In addition to being a member of local club St John’s Volunteers, he represented the purple and gold in Gaelic football at the minor grade.

Given his alma mater, St Peter’s College, placed a great emphasis on Gaelic games, it was actually through his rugby club – Wexford Wanderers RFC – that Deeny first stood out. He had already sampled life within the international system when he was selected for the U18 Sevens in 2018.

This helped to rekindle his desire for the game and he hasn’t looked back since.

I was playing county minor at the time with Wexford. I was more focused on that. I went away and focused just on improving myself. Developing more physically than technically. I remember Simon Broughton [head coach] and Mark Butler [team manager] asked me to go and play with the U18 Sevens.

“I appreciate that a lot, for them giving me a chance to come back. I came back and thankfully played well enough. I enjoyed myself over there, maybe found my love for rugby again.”

Just as important for his development has been a regular exposure to All-Ireland League rugby with north Dublin outfit Clontarf. With burgeoning Academy stars, seasoned campaigners and former professionals plying their trades in the domestic game, it is the perfect hunting ground for someone of Deeny’s ilk.

“When you’re playing U20s, you’re playing against huge lads. Some teams like Cork Con, Garryowen and Lansdowne, they’ve huge players. To get yourself ready physically against them for the U20s level ahead, it really does help,” Deeny acknowledges.

It’s very fast. The quality of rugby would be very close to some of the Ireland U20s games. It would be a very high standard.

It is set to be an intense opening to Ireland’s defence of their Championship crown with Friday”s affair against Scotland at Irish Independent Park (kick-off 7.15pm, live on RTÉ2) being followed by another home showdown with Wales seven days later.

Their campaign will then be bookended by back-to-back encounters with Italy (home) and France (away). Having already experienced similar turnarounds in his first season at this level, Deeny admits he will be better prepared for the challenges – both mental and physical – that await.

“I think you can get more experience of how important the recovery aspect is,” he added.

“I think this year I’ll be focused a lot more on getting more rest and making sure that I look after my body a bit better. The staff there, the S&C, the coaches, they encourage you just as much as you know yourself. Then it’s up to you, and up to their support, how well you’re going to recover.”