The Ireland Men’s Sevens team will compete for the Challenge Trophy tomorrow at the HSBC Paris Sevens following an opening day which saw them defeat England 27-14 but lose to ninth-ranked Argentina (22-7) and series leaders Fiji (40-5).

Anthony Eddy has brought a largely young and inexperienced Ireland squad to the final leg of the World Series, with seven players aged between 19 and 22. Tullamore teenager Cormac Izuchukwu and Peter Maher (20) are the programme’s latest new caps, as more depth is added ahead of Ireland’s progression onto the series proper in 2019/20 as a core team. 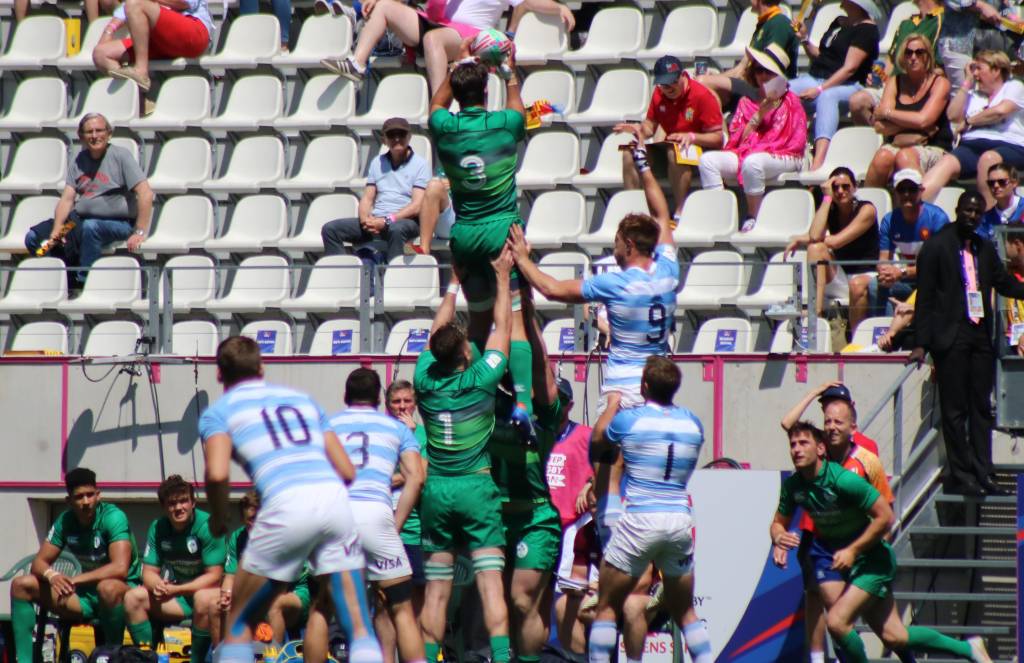 Defences were on top for much for the first half of Ireland’s first World Series meeting with Argentina in 17 years. Harry McNulty’s turnover-winning efforts at a ruck and Shane Daly’s break up to halfway were the Irish highlights, but Luciano Gonzalez finished off some patient build-up play for an opening fifth-minute try.

A couple of penalties allowed captain Billy Dardis to kick Ireland into position, and in the final play of the half, lineout possession was transferred slickly across to the right wing where Sullivan’s 35-metre surge to the line took him around Gonzalez. Dardis’ well-struck conversion went over off the left hand post, giving the invitational team a 7-5 lead at half-time.

Ireland’s high-tempo start to the second period saw Sullivan make ground again on the right, yet los Pumas stung them with a couple of turnovers and a well-taken second try from midfield by Gonzalez. Fed on the outside, Lautaro Bazan Velez soon widened the gap to 17-7, and Gonzalez completed his hat-trick in the final minute via Franco Sabato’s well-timed pass.

Facing a mostly inexperienced England team in the second round, Ireland hit the front after just a minute when Leinster Academy player Jack Kelly finished strongly in the left corner past Ben Harris’ despairing tackle. Dominating possession from the restart, Hugo Lennox took a lovely line onto a short McNulty pass to score from close range and make it 12-0. 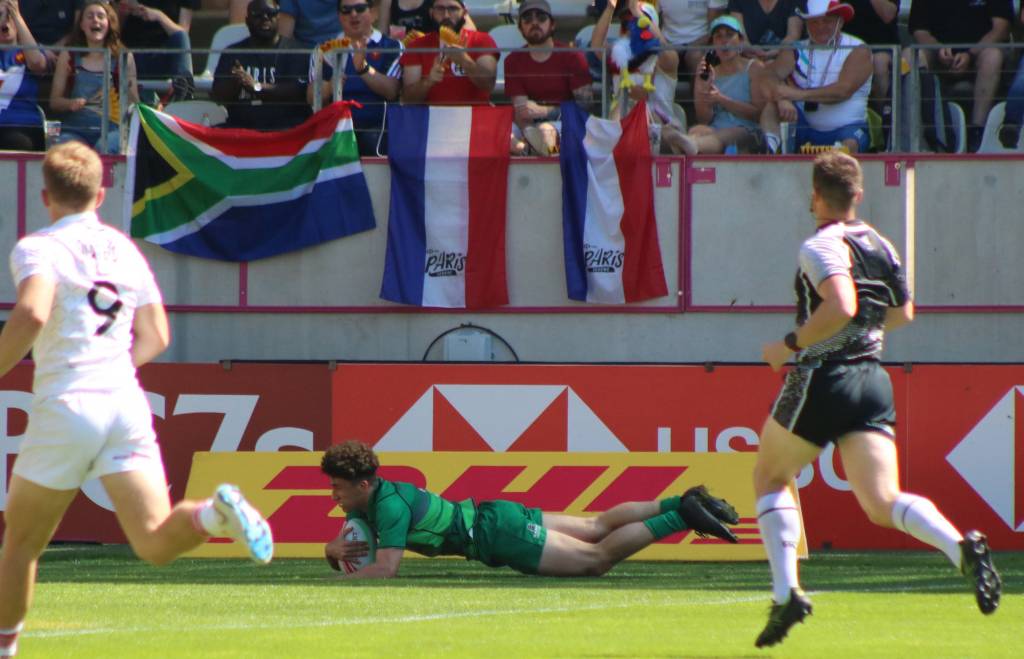 Dardis continued to direct his kick-offs away from James Rodwell, and he was at the heart of a crisp three-man move from a scrum which released Maher who touched down after outpacing Ollie Hassell-Collins for the right corner. A late Harris effort reduced the arrears for England to 17-7, and Ireland came under further pressure after Femi Sofolarin’s breakaway score early on the resumption.

Eddy’s charges were much improved for the remainder of the second half, though, with replacement McGrath to the fore. He picked from a ruck close to the English posts and fended off Sofolarin to slam down a five-pointer which was created by the running of Greg O’Shea and Maher. Bryan Mollen’s big hit on Max Coyle led to a turnover, and McGrath had the final say with a superb 70-metre breakaway try. 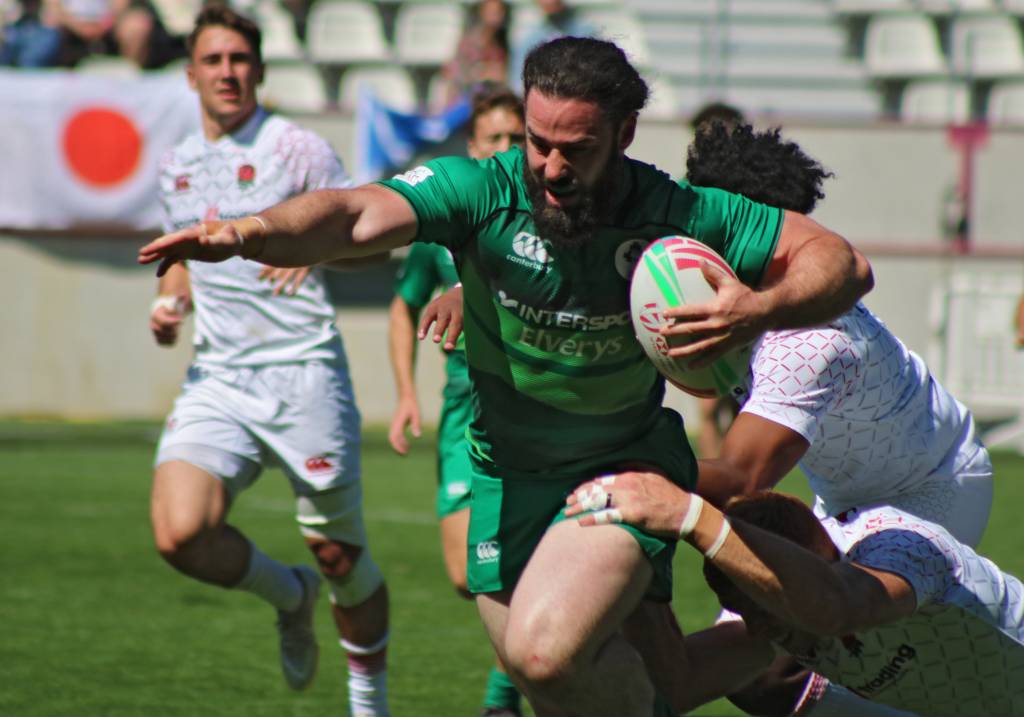 An Aminiasi Tuimaba first half hat-trick left Ireland chasing Fiji, despite a solid start which saw Maher and Jack Daly gain ground. The Olympic champions were at their clinical best as they exploited turnovers and any little gap, carving out a 21-0 interval lead with Mollen tackled a few metres short following some nice interplay with McNulty.

A missed tackle was ruthlessly punished two offloads later with the Fijians’ fourth try, scored by replacement Alasio Naduva who then completed his brace as Ireland coughed up possession from a lineout. Ian Fitzpatrick, who was brought onto the bench due to O’Shea’s facial injury, helped the men in green to hit back with a deserved score.

Sullivan impressively crashed over after spinning out a tackle, fending off another defender and carrying a third with him over the line. Nonetheless, Fiji wrapped up their victory with a late try as Jerry Tuwai swept in to gather McNulty’s tap-down from the restart and broke clear to set up replacement Asaeli Tuivuaka. 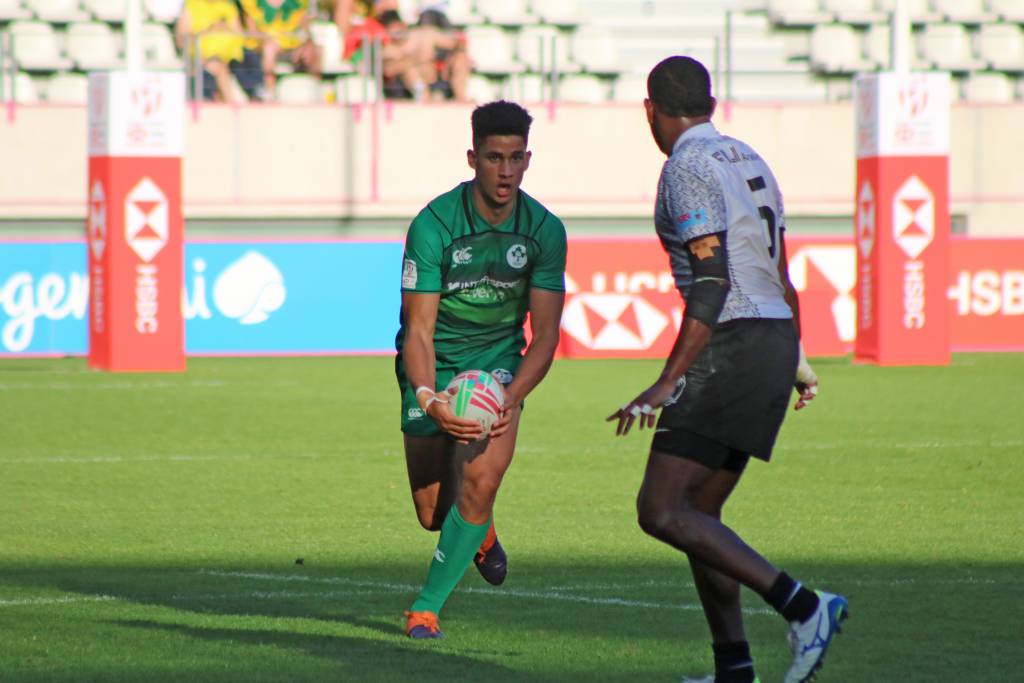 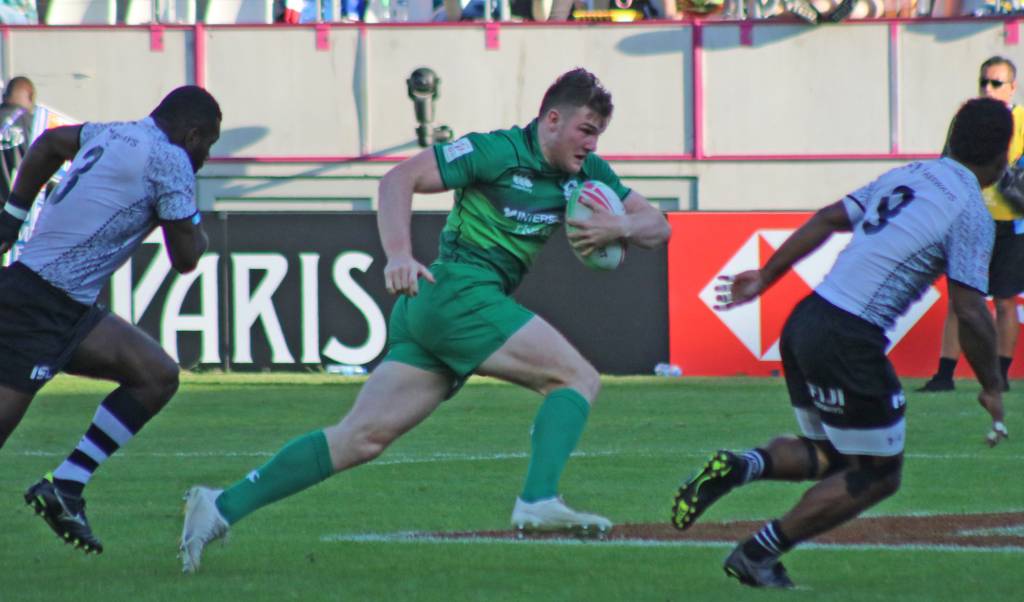 The final leg of the World Series in Paris is being broadcast on Sky Sports Arena this weekend, while World Rugby offer streaming in non geo-blocked locations – click here for more information. Tickets, priced from 20 euro on Sunday, are available to buy online here.