The Ireland Men’s Sevens team mixed it with some of the leading HSBC World Rugby Sevens Series sides as they claimed sixth spot at the London Sevens, handing their third debut of the weekend to Lansdowne winger Peter Sullivan in the process.

Day two saw Anthony Eddy’s men give Olympic gold medallists Fiji a real scare, pushing them all the way in a 33-24 Cup quarter-final defeat, before overcoming Canada 33-14 for their third Twickenham win. New Zealand’s 35-14 victory in the fifth place final failed to take the shine off a terrific two-day showing by this young and exciting Irish squad.

Bronze medal winners here last year, Ireland matched their London 2018 haul of three victories as they got the better of hosts England and Scotland in yesterday’s pool stages and Canada in today’s play-offs. Jordan Conroy and Mick McGrath led the try-scoring with four each, closely followed by Bryan Mollen, Ian Fitzpatrick and Terry Kennedy on three apiece. 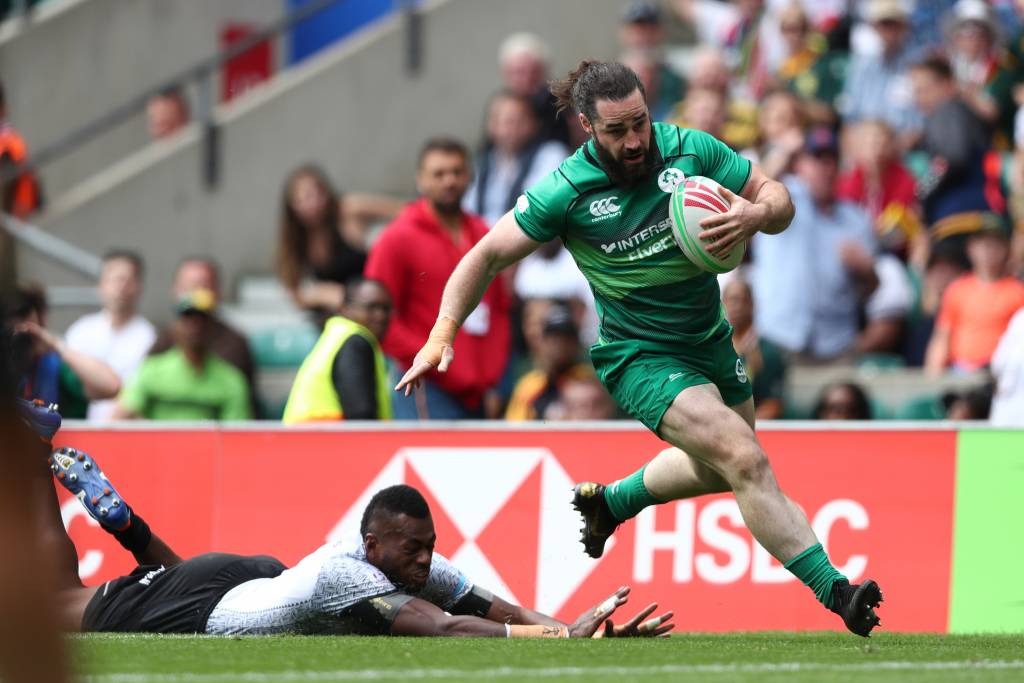 With a busy 2019/20 season on the World Series ahead, coaches Eddy and Stan McDowell blooded some new talent in London with Jack Daly (20) and 21-year-old duo Jack Kelly and Sullivan winning their first caps. Clontarf’s Hugo Lennox, who only turned 20 in March, also enjoyed a memorable World Series bow, making four starts and scoring the opening try against Canada.

Ireland picked up 12 World Series points for their efforts in the English capital. They will have their final outing as an invitational team on the series at Stade Jean-Bouin in Paris next weekend, featuring in a mouth-watering Pool A alongside England, Argentina and Fiji, who are now series leaders just ahead of the USA.

Ireland stunned eventual London champions Fiji with a dazzling two-try start to their Cup quarter-final clash, scoring inside the opening 30 seconds as Harry McNulty’s superb draw-and-pass unleashed McGrath to thunder past Sevuloni Mocenacagi on the left wing. Mark Roche was unlucky with his conversion attempt which bounced away off the near post. 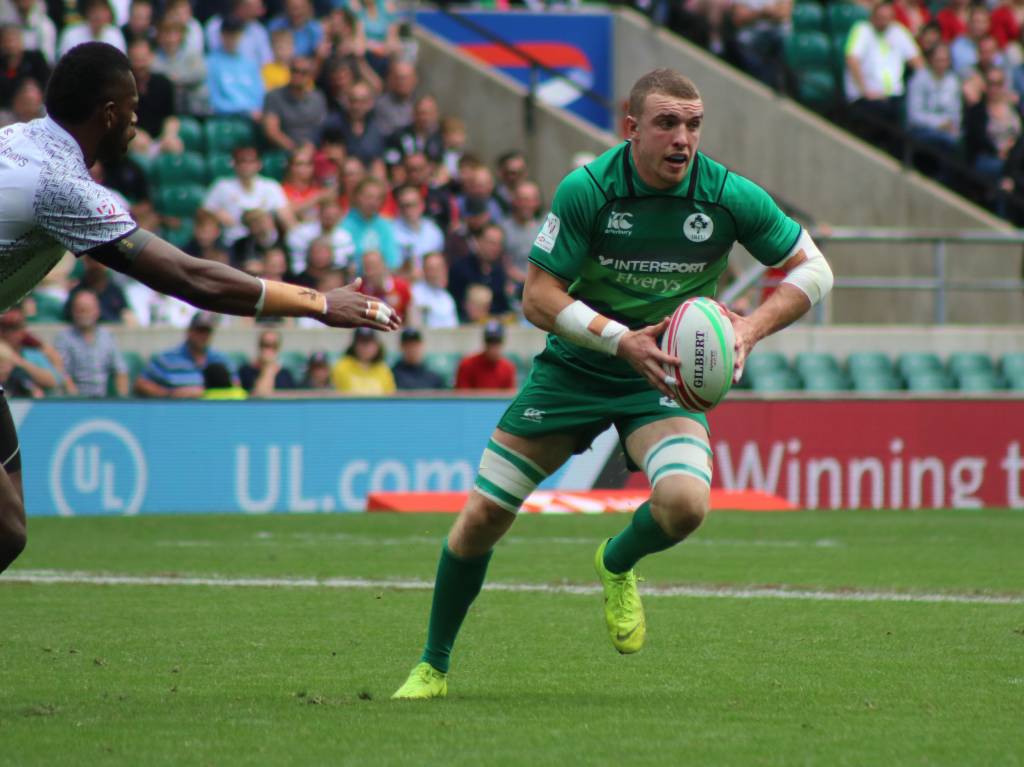 Another terrifically high restart from Roche forced a penalty, and it was the scrum half’s zippy pass which propelled McGrath in between two defenders in midfield. There was no stopping the Clontarf powerhouse who stretched out to score despite being tackled short of the line by Jerry Tuwai. Roche’s conversion extended the lead to 12 points.

Tuwai was lifted high to secure possession from the restart and Fiji immediately showed how dangerous they can be, a slick move finishing with Meli Derenalagi touching down midway through the half. Just as Ireland looked to respond, a turnover was converted into a lead score for Aminiasi Tuimaba, who crossed from Mocenacagi’s lobbed one-handed pass on a breakaway.

14-12 became 21-12 by the interval as Fiji’s breakdown skills allowed Tuwai to break free from his own 22 for their third converted try. An immediate fourth followed at the start of the second half, Vilimoni Botitu bursting onto the tap-down of the restart to get in under the posts. It looked a long way back for Ireland with Waisea Nacuqu landing his fourth conversion.

Conroy’s searing pace got them back in touch as he was fed early via a scrum on the opposite wing and burned past Tuimaba to score his fourth try of the weekend. The gap was suddenly down to four points after an outstanding 13-pass team try, McNulty’s winning of the restart was built on by Kennedy and Billy Dardis’ clever running, and a wonderful final delivery from Mollen, behind his shoulder, sent Fitzpatrick in behind the posts for captain Dardis to convert.

That set up a fascinating last two minutes, but as Fiji tried to break from deep, Dardis’ attempt to intercept led to a knock on and he was promptly sin-binned. The numerical advantage paved the way for replacement Asaeli Tuivaka to bound clear and settle this hugely entertaining nine-try contest. Nonetheless, the manner of the performance was further evidence of Ireland’s progression following on from two heavy defeats to Fiji last summer (38-12 and 38-5).

Returning to the pitch to compete in the second bracket of the play-offs, Ireland took on Canada with Daly, Kelly and Lennox all coming in as starters. Indeed it was Lennox who opened the scoring with a lovely show-and-go on halfway to sprint in unopposed after just 54 seconds. Roche converted and Daly did well to tidy up a loose ball from the restart. 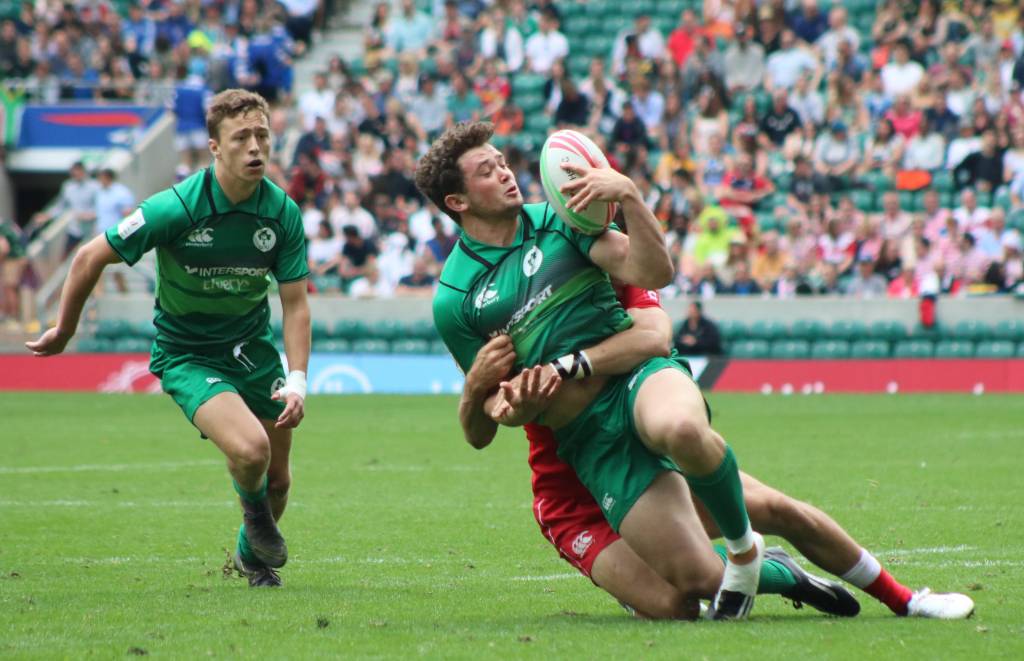 Canada’s initial attempts to respond were thwarted, Conroy coming up with a tremendous try-saving tackle on Justin Douglas. However, they finished out the first half with a 14-7 advantage thanks to a couple of well-worked late tries from Jake Thiel, who was freed up by Isaac Kaay’s pass, and Andrew Coe.

Canada exerted further pressure on the resumption, but Ireland hit back after just a minute’s play as replacement Mollen swooped on a misplaced pass on halfway, stepped inside Luke McCloskey and stayed clear of the chasing Nathan Hiriyama to score to the right of the posts and reduce the arrears to 14-12.

With Ireland’s bench growing in influence, Mollen turned provider when his flicked pass back inside sent Kennedy in behind the posts for the lead score, converted by Dardis. The skipper sewed up the win in the final minute, ghosting over from a quick tap following McNulty’s turnover penalty, and Kennedy completed his brace, gliding over from the right wing via McNulty and McGrath’s direct play off the restart. 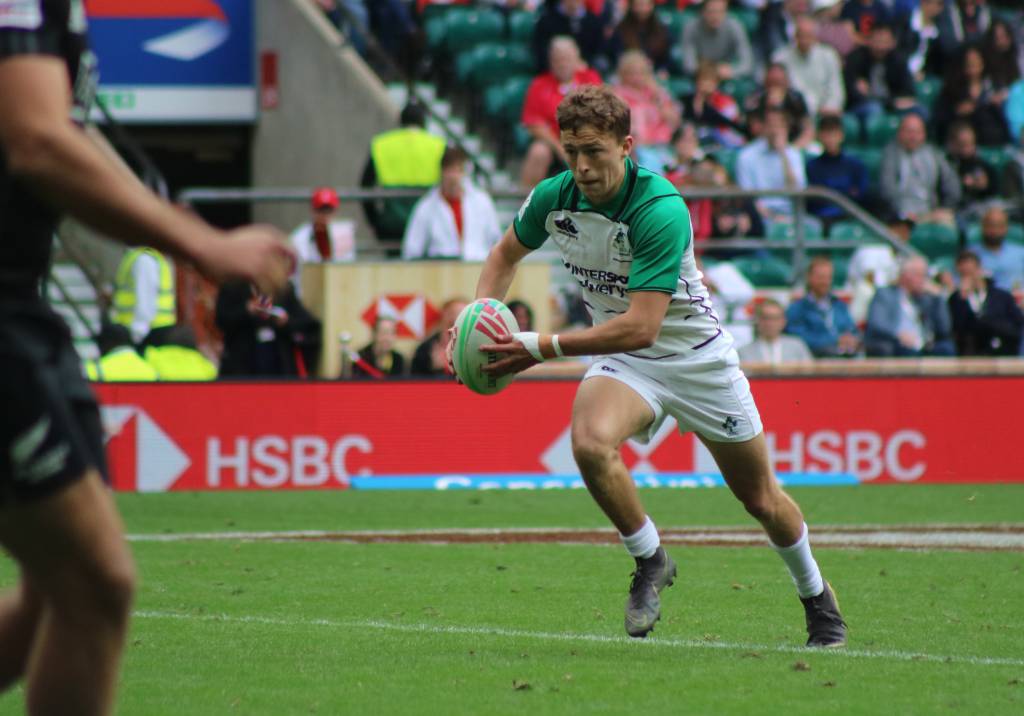 A dead leg picked up against Canada saw flying winger Conroy sit out the rematch with New Zealand. Sullivan, the top try scorer in All-Ireland League Division 1A this season, stepped up to join the bench. Again, Eddy’s charges were first on the board as Kennedy made sure some lovely interplay involving Mollen, McNulty and himself resulted in a third-minute converted try.

However, the New Zealanders, who won yesterday’s pool encounter 34-7, snapped back to lead the fifth place decider 14-7 at the break. They wore down the Irish defence for Tone Ng Shiu to score in the fifth minute, and the Fijian-born Joe Ravouvou added a quick-fire second with an impressive sidestep from midfield.

Dardis’ footwork was just as good when he drew his side level, weaving brilliantly through in the ninth minute as he wrong-footed Dylan Collier, evaded two diving tackles and absorbed a big Scott Curry hit before holding firm to get a clear grounding. Unfortunately for Ireland, the All Blacks Sevens outfit had more in the tank and they finished with a flourish thanks to further tries from Ravouvou, Ng Shiu and Regan Ware. 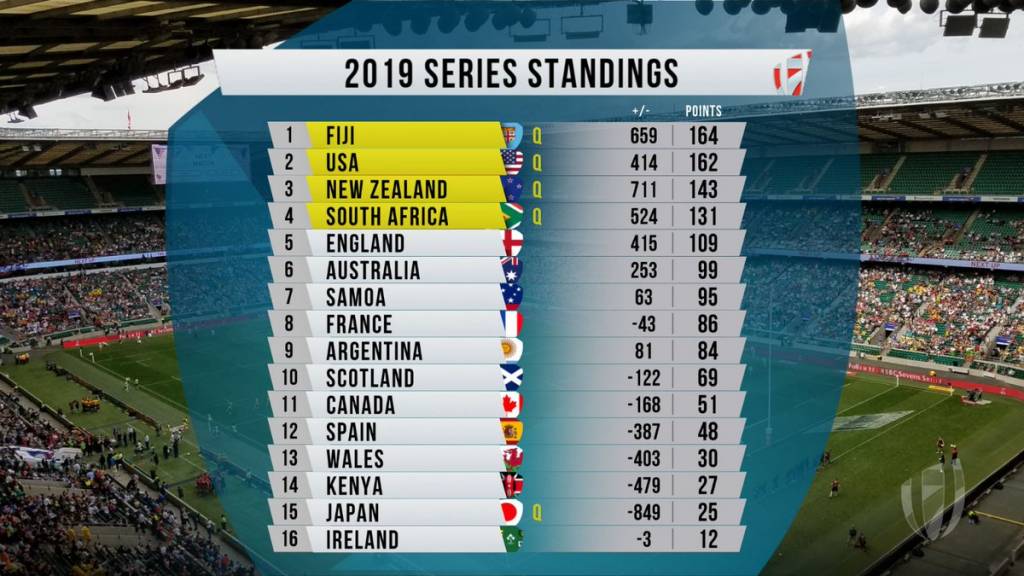