Today marks the launch of the 2021/22 season plan and a new look for Women's Rugby in Ireland - #NothingLikeIt. We caught up with Su Carty, IRFU World Rugby Representative, Amanda Greensmith, Women's Development Manager and Anthony Eddy, Director of Women's & 7s Rugby ahead of the launch to discuss a busy year ahead and some of their own #NothingLikeIt moments.

IRFU Women’s Development Manager Amanda Greensmith believes #NothingLikeIt has a significant role to play in kickstarting the recovery of sport in Ireland.

“I’m excited to see how we can continue to grow the game, across, up and down the pathway. I think #NothingLikeIt is going to be a great way of showing people the access points in the game that are available to them and promoting them in a way that’s going to be really relevant to people.”

IRFU Director of 7s and Women’s Rugby Anthony Eddy explained the significance of 2021/22 in the overall World Cup cycles.

“On the back of a productive Women’s Six Nations campaign and also some quality matches for our Women’s 7s programme, I think everyone’s looking forward to 2021/22 with a really positive outlook. Ultimately our aim would be to qualify both the Women’s 15s and 7s teams for their respective Rugby World Cups.”

“There will be a number of players shared across both programmes so it will be a very busy year for some of those players.” 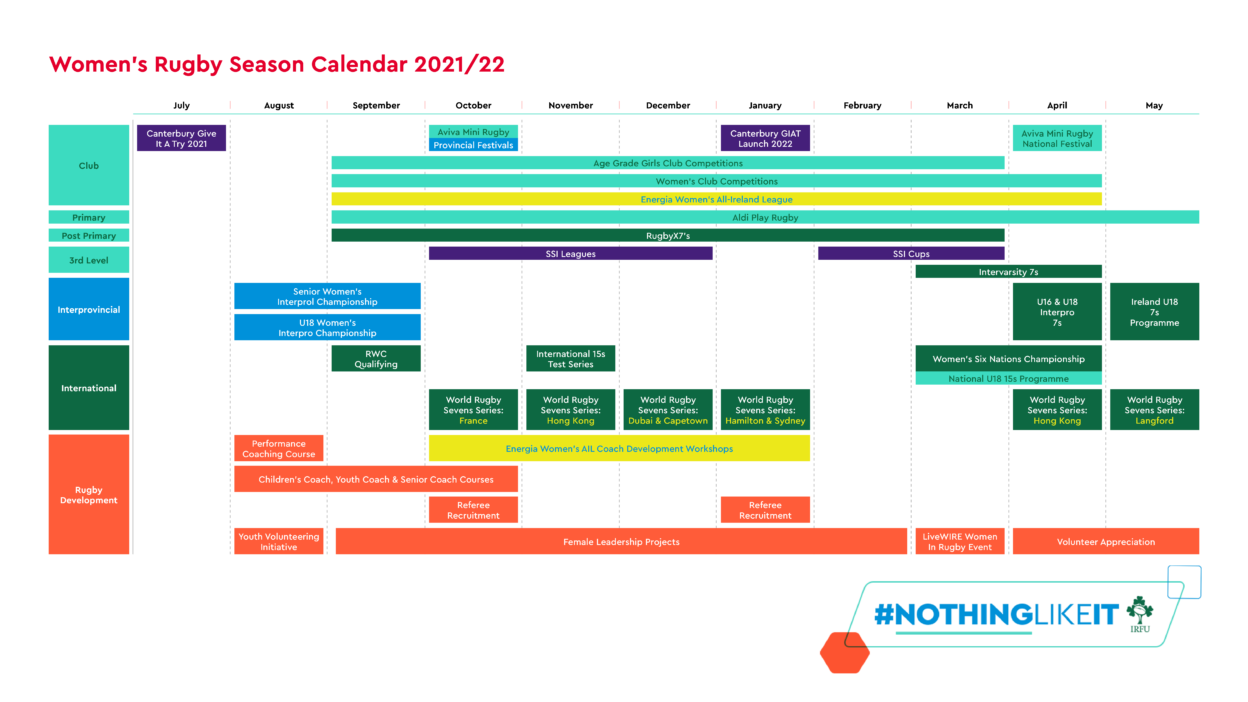 IRFU Committee Member Su Carty has been across #NothingLikeIt’s journey to today since its inception. She says it’s the culmination of significant in-depth research and development.

“Amanda has outlined the opportunity being expanded and further developed and Anthony has spoken about what that can lead to on the world stage. Our job now is to communicate it effectively and have every girl in the country invited to come and give rugby a try. The clubs and the provinces are so engaged in that.”

“We’ve learned from various campaigns over the years how important visibility is. If a girl or a woman can see something out there that they identify with getting involved, giving the game a go, really enjoying it, succeeding to whatever level they want to – they are more likely to step into the sport.”

“I love the hash tag on so many levels. The research looked at what we needed to address to speak effectively to girls and women to invite them into rugby. It’s still difficult for some women and girls to step into the game. Sometimes they feel that they’re not sporty or maybe they feel uncomfortable for various different reasons. #NothingLikeIt seeks to encourage more women and girls to find out about the game.”