Cork Constitution captain Aidan Moynihan showed his class with a 16-point haul in their 36-25 win over Lansdowne in Energia All-Ireland League Men’s Division 1A.

After a testing start to the season, Jonny Holland’s Cork Con have strung together four victories on the trot. A third of the way into the campaign, they are fourth in the table, a full nine points clear of their nearest rivals.

Lansdowne, on the other hand, are struggling for results despite being competitive for long spells. Their fifth defeat in six games has them eighth overall, although they did pick up a try-scoring bonus point at Temple Hill.

Mark McHugh’s men were only 19-15 behind at half-time, but came under immediate pressure from an eager Con outfit with former skipper Niall Kenneally and George Coomber linking up well to spark a pacy counter attack.

Michael Silvester had to put in an early try-saving tackle on Daniel Hurley, with Con continuing to force the issue until Moynihan opened the scoring on the 10-minute mark.

A scrum penalty and a strong series of pick-and-drives got them into range, and Hurley was crowded out before Moynihan brilliantly squeezed over in the right corner past Sean Galvin and Silvester. He then tucked away the touchline conversion. 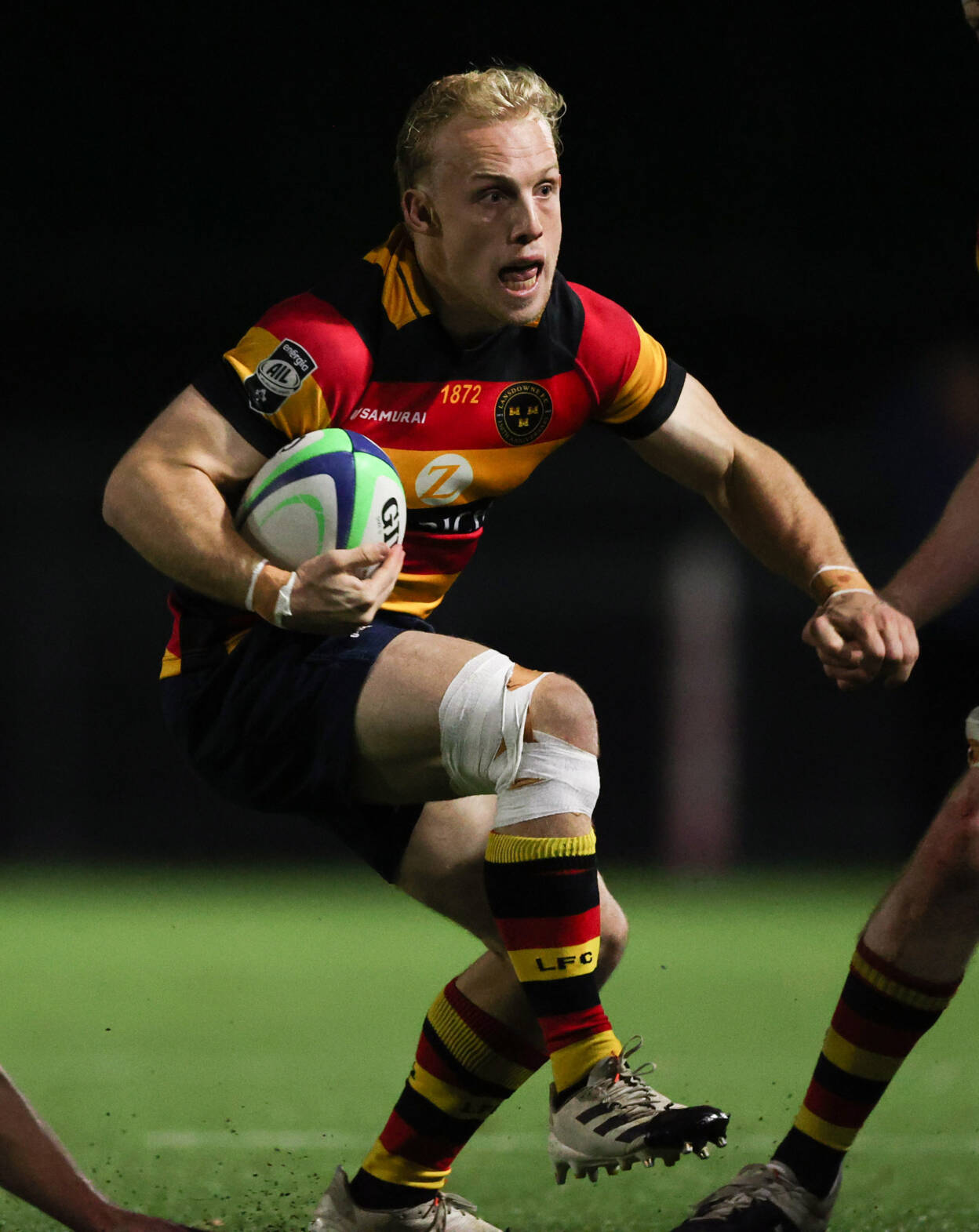 Peter Hastie landed a well-struck conversion and added a 18th-minute penalty to give the visitors a 10-7 lead. A Connor O’Sullivan turnover, allied to a subsequent penalty, saw Lansdowne’s defence hold firm as Con tried to respond.

The Leesiders regained the lead on the half hour mark, lifting the tempo in attack with Kenneally’s nicely-delayed pass releasing Billy Crowley up into the Lansdowne 22. Jack Kelleher then broke a tackle from Tadgh McElroy to raid over from 15 metres out.

After Hastie missed a central penalty, the sides swapped late tries with Donegal man Conor McMenamin muscling over for Lansdowne, and then Con replacement Luke Kerr charging down a Jack Matthews kick to score in the left corner. 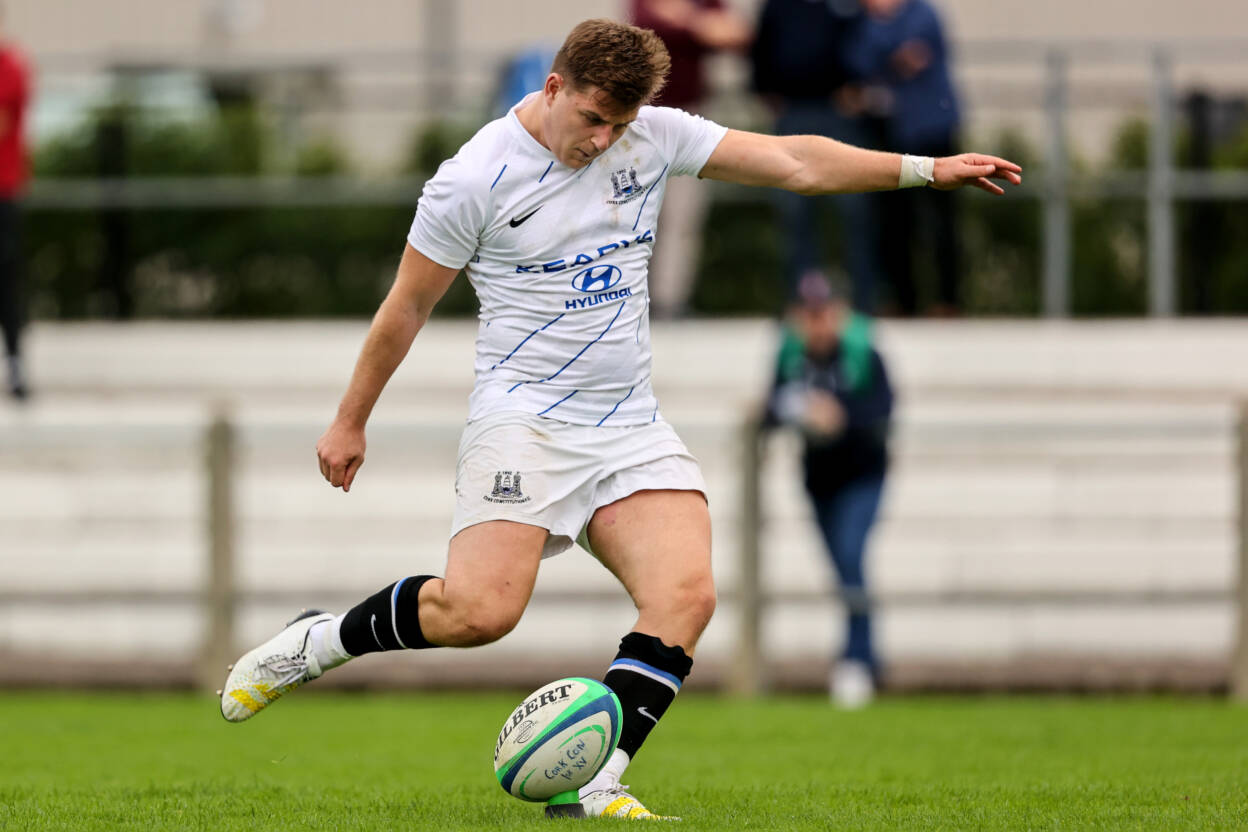 Moynihan’s conversion gave the hosts a four-point buffer, yet Lansdowne made sure they had the better of the third quarter as they edged their way back in front in the 50th minute.

A defence-slashing break involving Galvin and Cillian Redmond was the highlight before number 8 Darragh Murphy burrowed over from a metre out. It was 20-19 until a crisp long-range penalty from Moynihan in the 57th minute.

Lansdowne replacement James Doyle sent a penalty wide from distance, following good work from the visitors’ scrum. The Con set piece then gained the upper hand to give them crucial field position entering the final quarter of an hour.

Kenneally carried strongly in the 70th minute, bringing his side back to the edge of the Lansdowne 22. Moynihan managed to put Andrew Treacy through a gap and he had replacement Alessandro Heaney up on his shoulder to slide over beside the posts.

Moynihan converted the bonus point score to make it 29-20 and Con sealed the result just three minutes later, their captain adding the extras to full-back Coomber’s 40-metre run-in for the try of the day.

Playing with a penalty advantage, long passes from Kerr, Moynihan and Bruce Matthews released replacement Mark Stafford into space. He drew in a defender and put Coomber haring clear of his chasers for a smashing score that suddenly made it a 16-point margin.

Credit to Lansdowne, they regrouped quickly and made sure they took something out of the game. Murphy threatened from his own quick tap and kick through, hounding Eoin Quilter into a loose kick and the visitors worked the ball wide for Galvin to dot down. 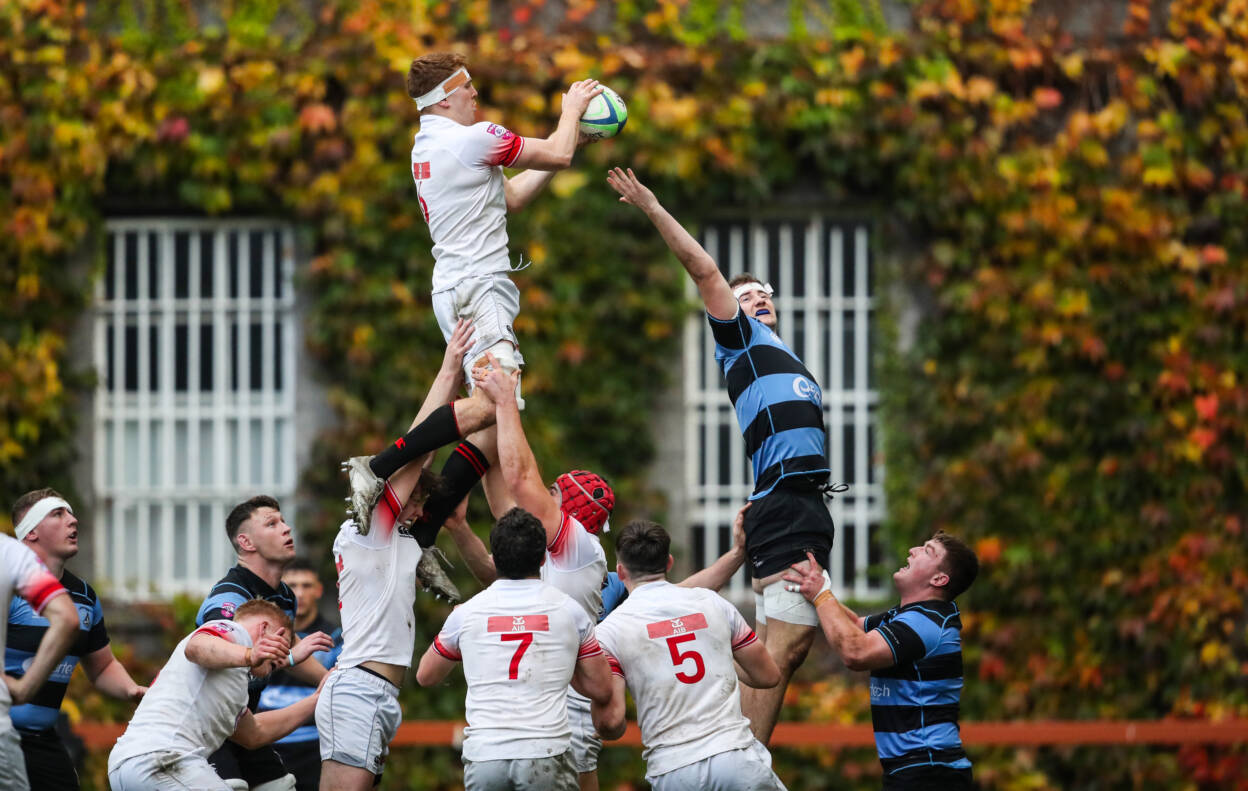 Meanwhile, Dublin University bounced back from last week’s late heartbreak at Clontarf to triumph 34-28 over a battling Shannon side.

Trinity were quickest out of the traps at College Park, captain Louis O’Reilly finishing off a breathless break involving James Dillon for an opening 11th-minute try.

The students began the second quarter with a second converted score, Harry Sheridan to the fore before number 8 Diarmuid McCormack expertly spun out of a tackle to score under the posts.

Shannon’s impressive maul, which did so much damage against Garryowen, worked them back into contention from 17-0 down. Munster Academy scrum half Ethan Coughlan’s sumptuous offload was turned into a try by the pacy Aran Hehir.

Mike Cooke’s conversion was cancelled out by an Aran Egan penalty, but Killian Dineen tidied up a late cross-field kick to unleash Dan Hurley for a smashing finish from 45 metres out, cutting the gap to 20-14. 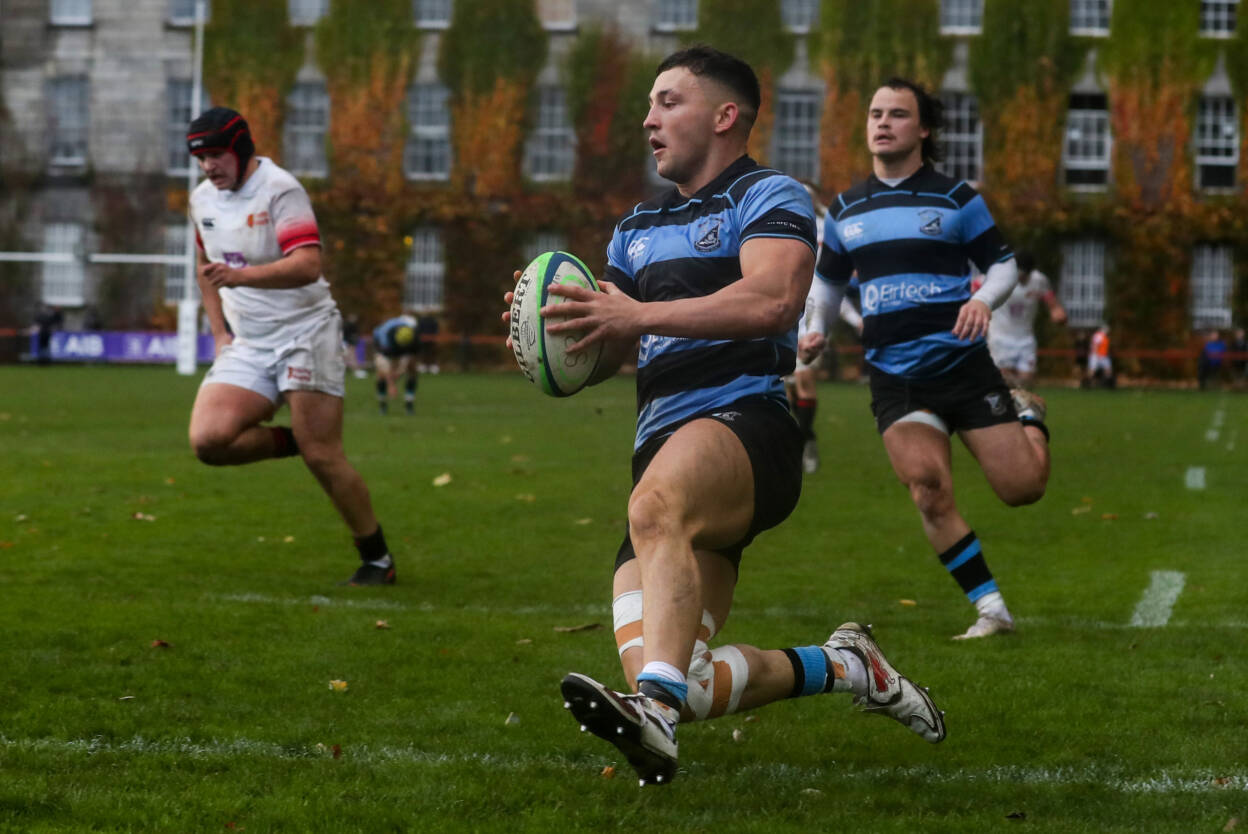 However, Shannon flanker Odhran Ring saw yellow for a shoulder-led tackle early in the second half, and Trinity hooker Mark Nicholson powered over from a maul. Egan’s boot made it 27-14.

With a quarter of an hour remaining, the students effectively wrapped up the result. Nice hands from Egan sent Gavin Jones breaking through the middle and he put the supporting Louis McDonough over just to the right of the posts.

Coughlan supplied another assist, his inviting pass releasing Flannery to score from close range, and it was a break from his half-back partner Cooke which gave them the momentum for Nicholas to burrow over right at the death. 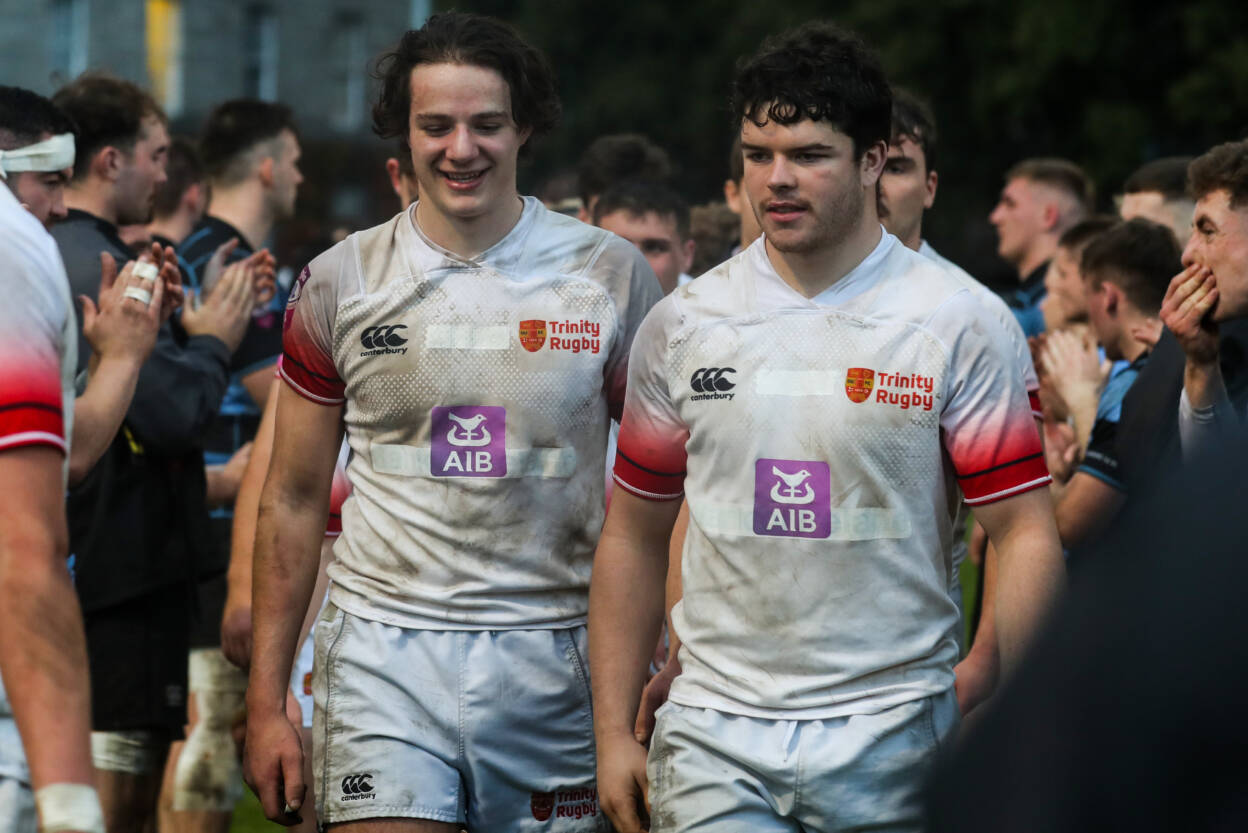 Young Munster recovered from an early 13-point deficit to hand defending champions Clontarf their first defeat of the season.

A superb solo try from replacement Pa Ryan, coupled with a pick-and-drive effort from Dan Walsh, delivered a hard-fought 24-16 victory for the Cookies.

Gearoid Prendergast’s men recovered from an early Cian O’Donoghue try to trim the gap back to 16-10 by half-time.

Out-half Conor Kelly kicked Clontarf’s other points at Greenfields, but a crucial defensive stand from Munsters early in the second period spurred them on to claim a famous result. 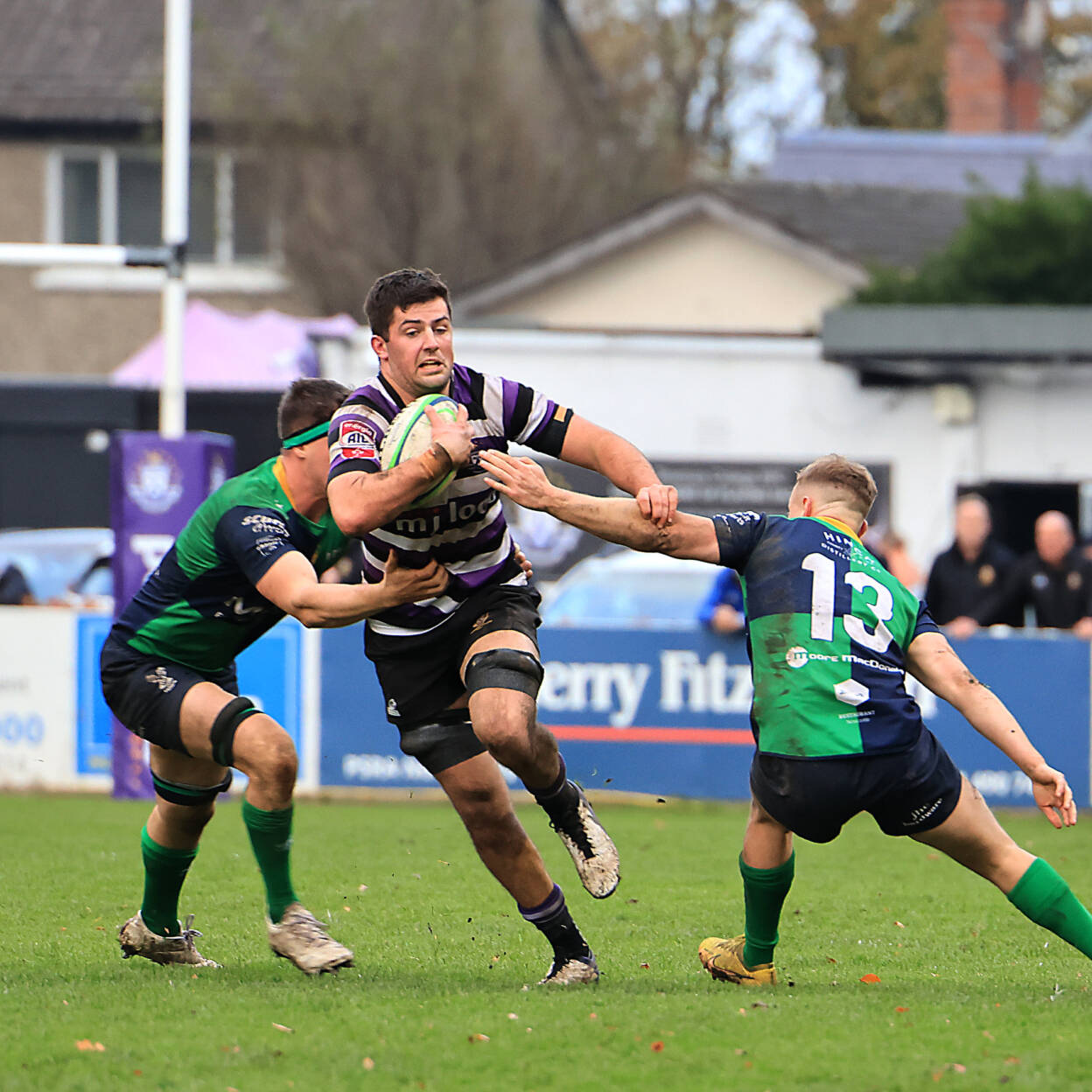 Securing their sixth straight bonus point win, Terenure College now have a four-point lead at the top of the table after beating Ballynahinch 38-21 at Lakelands Park.

An early penalty miss from Caolan Dooley mattered little as Terenure were soon into their try-scoring stride. Flanker Luke Clohessy crossed from a bulldozing lineout maul in the seventh minute.

They swiftly added a second one, captain and player-of-the-match Harrison Brewer offloading out of a tackle for fellow lock Matthew Caffrey to rampage over from outside of the ‘Hinch 22.

He shrugged off Ethan Graham’s attempted tackle to score out wide on the right, with centre Dooley converting for a 12-0 lead. Just as the visitors were making some headway, they were stung by their former back rower Conall Boomer in the 17th minute. 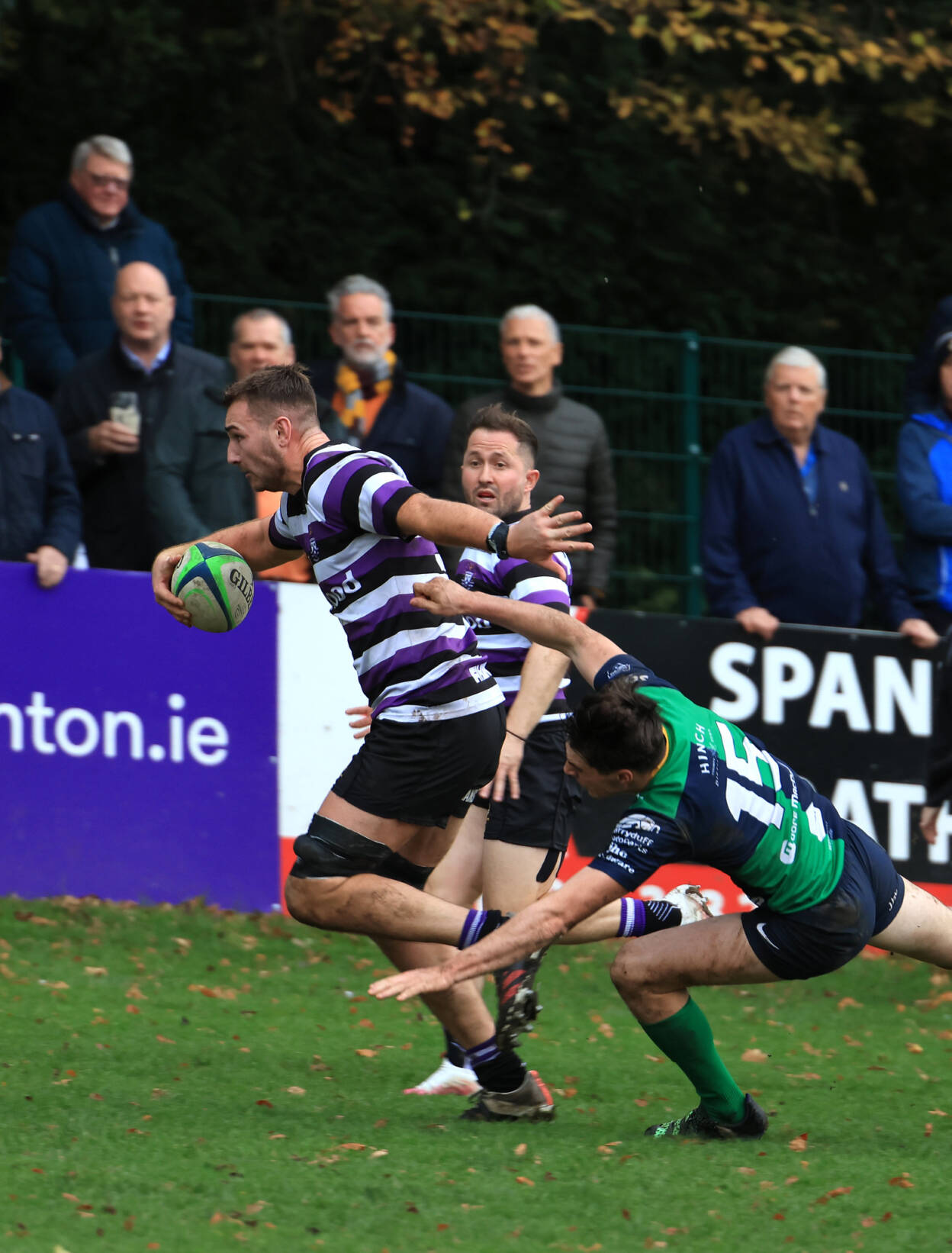 ‘Nure number 8 Boomer won a turnover penalty and took it quickly to dart back into the ‘Hinch half. He put boot to ball as he was tackled, his kick just evading the grasp of George Pringle and it bounced up for Alan Bennie to collect at the second attempt and touch down.

Adam Craig’s charges hit back through a well-executed lineout maul, which drove hooker Claytan Milligan over from 10 metres out. A break from centre Pringle and a quickly-taken penalty from Conor McAuley had gobbled up the metres before that.

The conversion from Greg Hutley closed the gap to 19-7 for half-time, ‘Hinch going close to adding to their tally when a Mark Best cross-field kick just had too much on it for Aaron Cairns, and Tom Martin was also stopped short of the line.

Their defensive work offered further encouragement as they stalled a ‘Nure maul and then skipper Tom Donnan and Best combined to win a turnover when holding up Dooley inside the ‘Hinch 22.

Nonetheless, ‘Nure got the scoreboard moving again in the 50th minute when nice hands from Brewer and Callum Smith released Colm de Buitléar to bag the bonus point try despite a tackle from his opposite number Pringle. Adam La Grue converted. 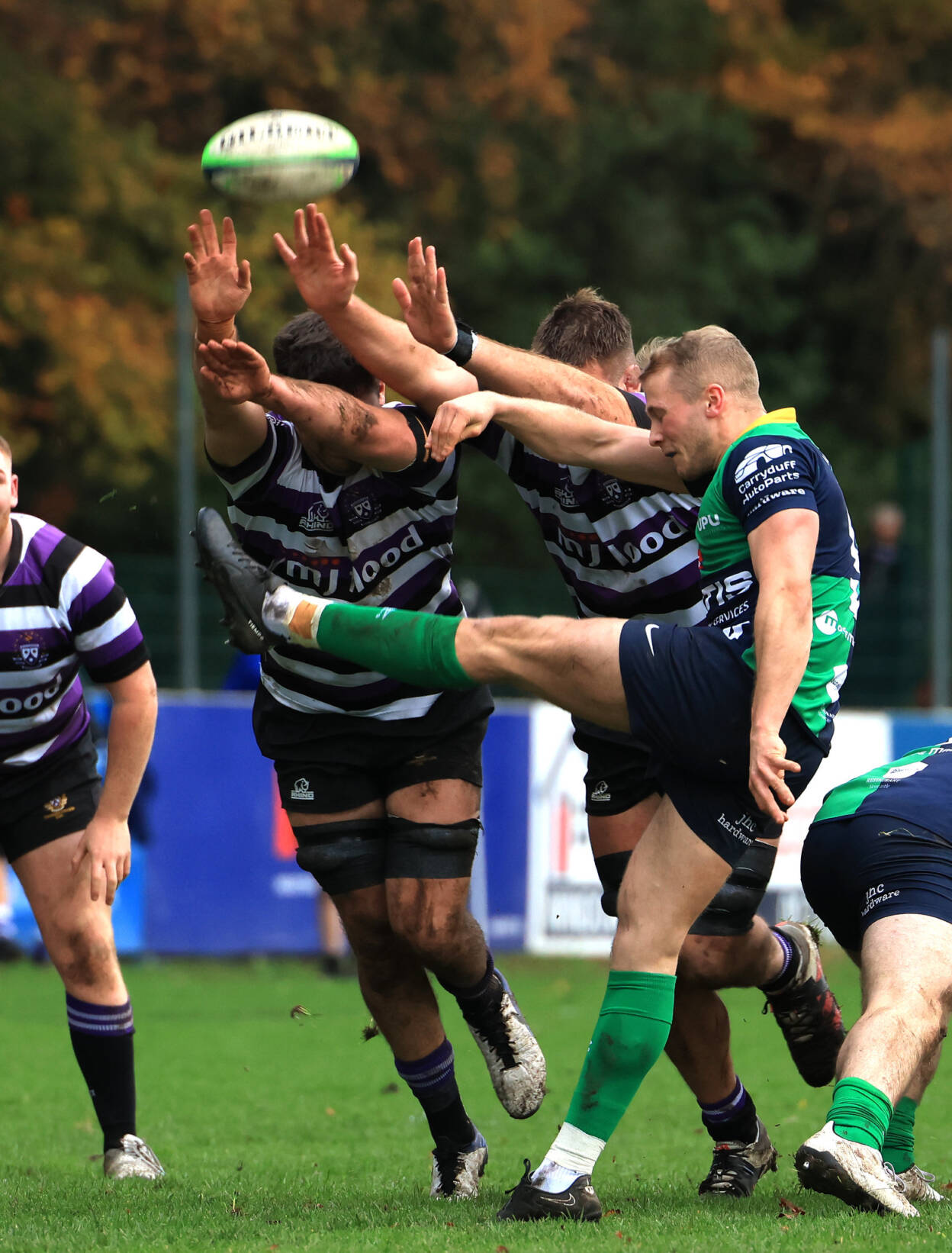 A well-taken Sean McNulty maul try extended the lead to 31-7, but ‘Hinch continued to press for scores at the other end, a Jamie Macartney break going unrewarded and a costly offside decision against replacement Kyle Gill robbing them of a maul opportunity.

There was no stopping the speedy Pringle in the 68th minute, though, as he nipped over in the left corner just ahead of La Grue. ‘Hinch had countered from a kick and a slick one-handed offload from Best opened the way for Cairns to dart through and supply the scoring pass.

Hutley’s conversion made it a 17-point deficit, but when Craig Adams collected replacement Henry McErlean’s well-placed restart, ‘Nure were back on the front foot. Foul play at a ruck landed ‘Hinch replacement Chris Gibson in the sin bin.

The home side took a familiar route to the try-line, a powerful lineout drive delivering a second try for McNulty, which McErlean converted. Cairns, who stepped in at scrum half for ‘Hinch, had the final say when slaloming clean through from a ruck.

Down at Dooradoyle, brothers Alex and Dylan O’Grady scored three tries between them as UCD opened their win account. They outscored Garryowen by seven tries to three in a 47-22 bonus point success.