The shock result on the opening day of the Energia All-Ireland League Men’s Division 1A came on the Aviva Stadium’s back pitch where Ballynahinch edged out Lansdowne in a nine-try thriller.

Out-half Greg Hutley’s 72nd-minute penalty handed ‘Hinch a famous 34-31 bonus point victory, having led 31-19 at one stage and come back from an early 12-3 deficit.

Tries from Luke Thompson and Dan Murphy gave Lansdowne a fast start, but Ballynahinch ended the first half with a 24-19 lead thanks to closing efforts from Ireland Sevens international Fergus Jemphrey and George Pringle.

It was all Lansdowne early on, Thompson hoovering up a Ballynahinch lineout at the rear and a subsequent break from Ireland Under-20 Grand Slam winner Charlie Tector had the visitors scurrying back towards their try-line.

The hosts hit the front in the fourth minute, a powerful lineout maul propelling hooker Thompson over on the left. The try went unconverted and Mark Best was quickly in at the breakdown to set up a Hutley three-pointer in response. 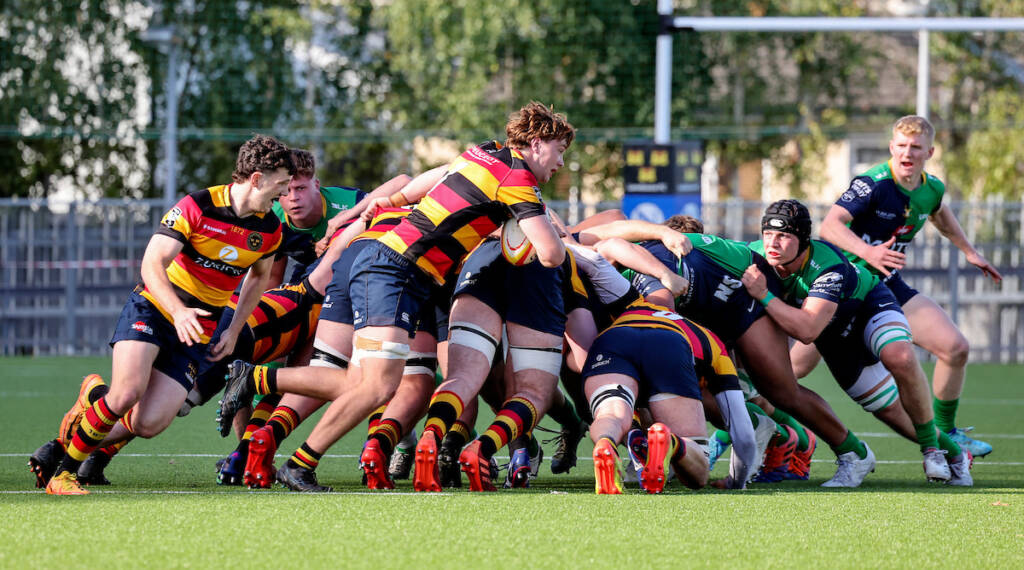 ‘Hinch repelled Lansdowne’s next maul effort but missed touch from a penalty. The hosts managed to advance again, lock Murphy getting a timely offload away and popping up soon after to score from Jack Matthews’ inviting pass. Tector’s right boot made it 12-3.

Crucially, Adam Craig’s side never let Lansdowne get too far in front. Ulster Academy duo Conor McKee and George Saunderson were heavily involved before captain Thomas Donnan carried up close and McKee fired a quick pass out for the inrushing Best to score under the posts.

The two-point gap was restored after Hutley’s simple conversion, and a knock-on spoiled the headquarters club’s next opportunity. Nonetheless, Mark Roche’s quick tap injected pace into an attack from further out, as backs and forwards combined to good effect. 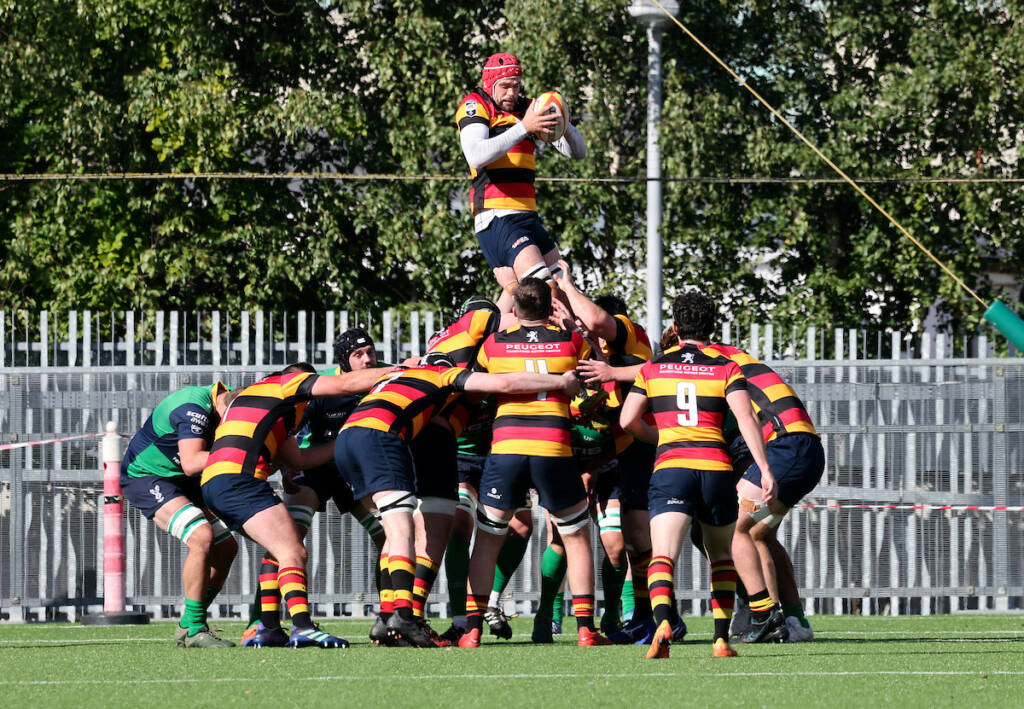 Peter Sullivan, who left Connacht in the summer, used a strong hand-off to break forward in the 27th minute and offload to Clive Ross. The Lansdowne skipper drew in the covering Rory Burke and sent the supporting Matthews over for a Tector-converted try.

Leading 19-10, Lansdowne were on the cusp of their bonus point score when ‘Hinch youngster Ethan Graham hauled down Michael Silvester, who had been released by an excellent Ross offload.

Six minutes from the break, McKee kicked long off a scrum to Silvester. He ran the ball back but his pass, intended for Sullivan, was intercepted by Jemphrey who had a 40-metre run-in despite Galvin’s committed chase.

Hutley converted into the sun, with the aid of the right hand post, and ‘Hinch snatched the lead right on the stroke of half-time with a tremendous seven-pointer off a scrum on halfway.

Burke’s decoy line allowed Hutley to send centre Pringle piercing through the Lansdowne midfield and he cut inside Sullivan for a cracking score. The final kick of the half left Lansdowne 24-19 behind. 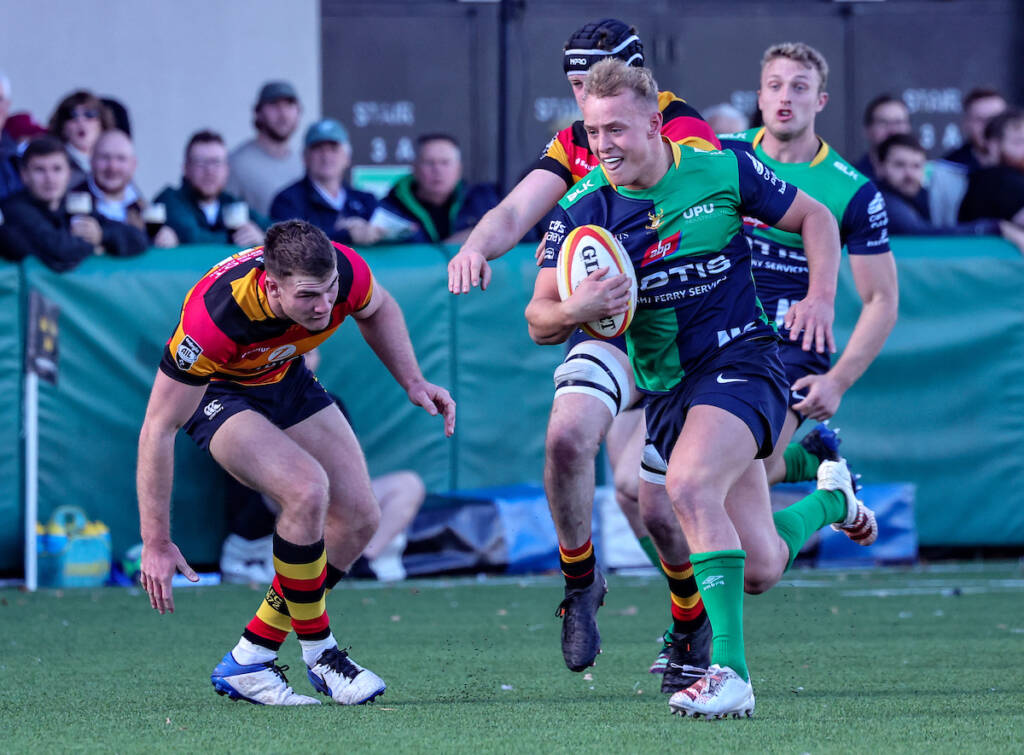 Inside 50 seconds of the restart, Pringle had blazed over for the bonus point score. Graham impressed under a high ball and, a few phases later, Hutley and Burke unleashed Pringle from halfway. He evaded a tackle from Roche to romp home.

Hutley tagged on the extras to widen the margin to 14 points, and that is how it remained for most of the third quarter as a try-seeking Jack Connolly, Lansdowne’s reserve scrum half, just knocked on under pressure from Bradley Luney.

A scrappy spell was ended by Lansdowne’s bonus point try, the key pass coming from Stephen Madigan, who got the ball free in a tackle from Pringle as he sent Silvester speeding out to the left where he put Galvin over in the corner.

The Lansdowne winger got the ball down despite a last-ditch lunge from Jemphrey. Connolly was unable to convert, but Mark McHugh’s men were now only seven points down entering the final quarter. 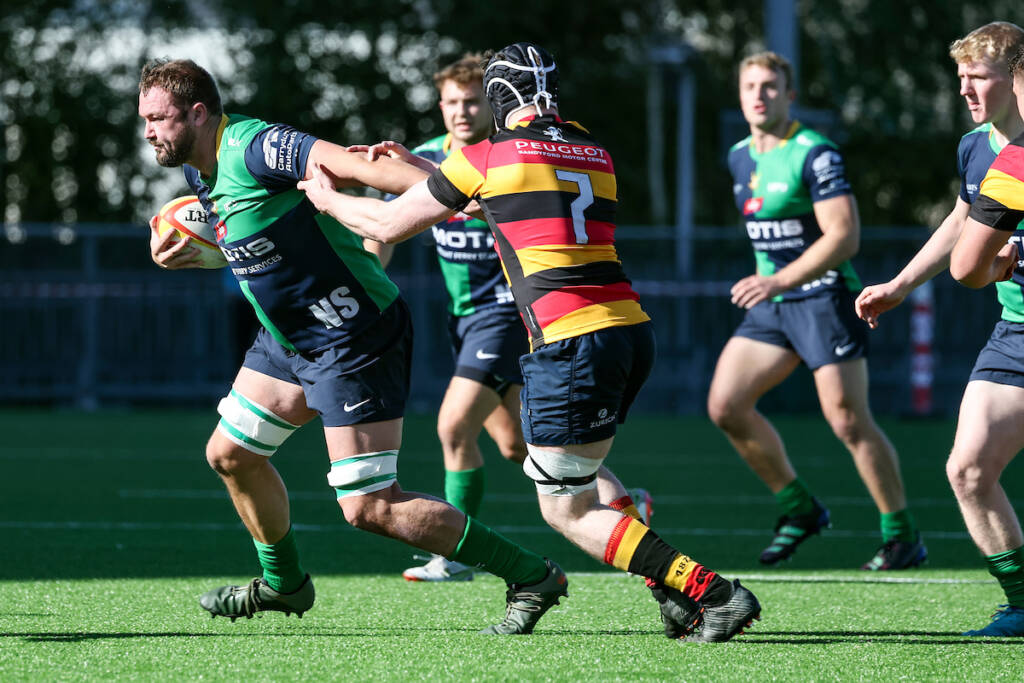 Hutley was off target with a long range penalty attempt, and Lansdowne were soon hammering away at the ‘Hinch line, their bench having impact as well as the visitors’ indiscipline.

A series of penalties had the home side knocking on the door until number 8 Lawlor scrambled over the top of a ruck to score. The levelling conversion tucked away by Connolly, we were in for a fascinating conclusion.

Graham broke a tackle to get ‘Hinch on the move again, and with Murphy going too high on Donnan, Hutley lofted over his sixth successful place-kick to see the County Down outfit retake the lead.

A strong Sullivan run took Lansdowne back into ‘Hinch territory, but they infringed at a maul after turning down a long-range kick at the posts. In the final play, replacement Madigan knocked on in a tackle to seal their fate.