The Temple Hill faithful were fearing the worst when Conor Hayes crossed for his second try in the 49th minute, moving the Cookies into a 15-6 lead.

Ireland Under-20 flanker Ronan O’Sullivan had an impressive debut for Young Munster, who had led 8-3 at the break thanks to Hayes’ nicely finished 29th-minute effort in the right corner.

In Jonny Holland’s first Energia All-Ireland League game as head coach, Cork Con rallied impressively. A Moynihan penalty was followed by replacement James Murphy’s 65th-minute charge in under the posts for a 16-15 turnaround.

Evan Cusack raised Munsters’ hopes with a well-struck penalty to snatch back the lead, but Moynihan’s late place-kick ensured his side prevailed in nail-biting fashion.

The action was fast and furious right from the off, some massive hits going in and Young Munster full-back Stephen Lyons needed to cover a kick chase launched by Cork Con’s Jack Kelleher off a loose ball.

Good work at the breakdown from tighthead Conor Bartley, who followed up to play his part in a scrum penalty, launched Munsters forward. Kelleher got over the ball to get a decision for Cork Con, though, and bring play back up to halfway. 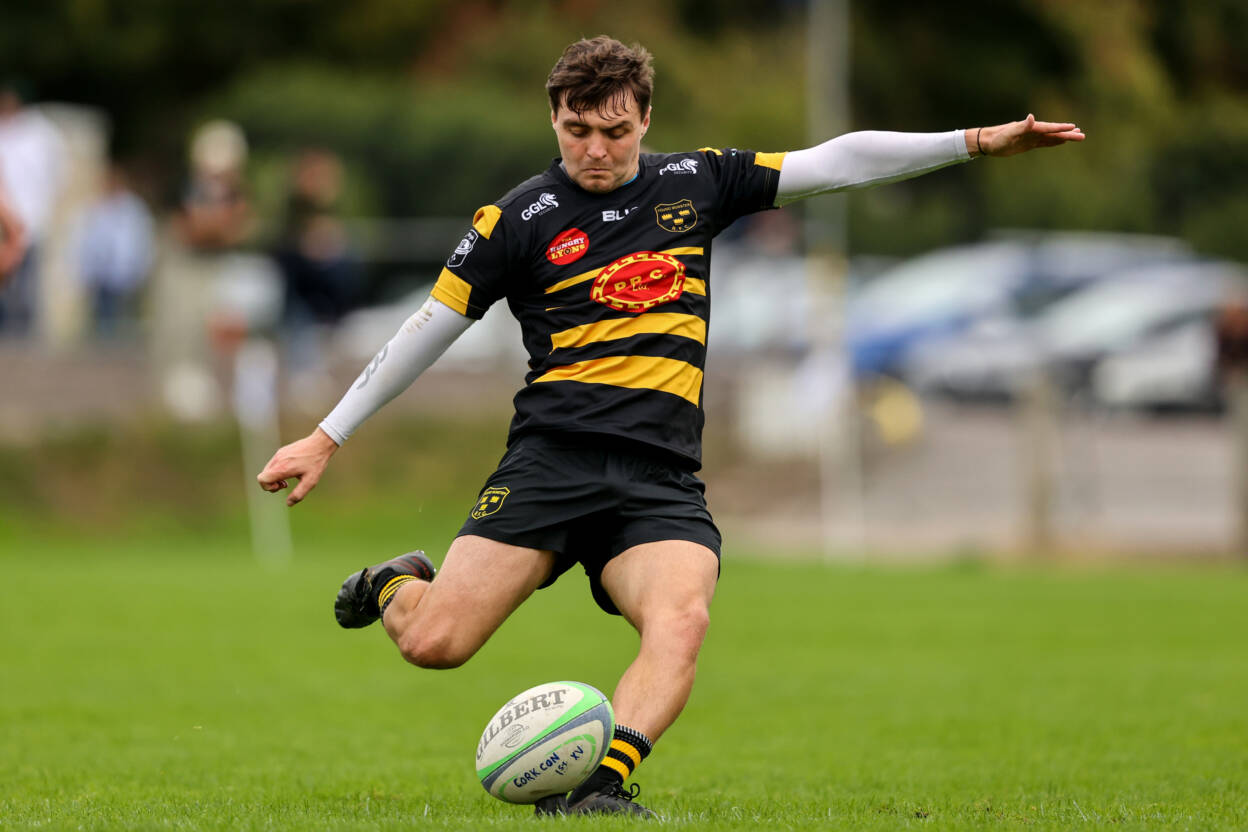 The Cookies broke the deadlock in the 18th minute, a massive shove on their own scrum put-in forcing the infringement and out-half Cusack split the posts from just outside the Con 22.

Greg Higgins’ timing at the breakdown was rewarded with a penalty, setting up full-back George Coomber to kick Con level with a crisp strike from distance in the 24th minute. 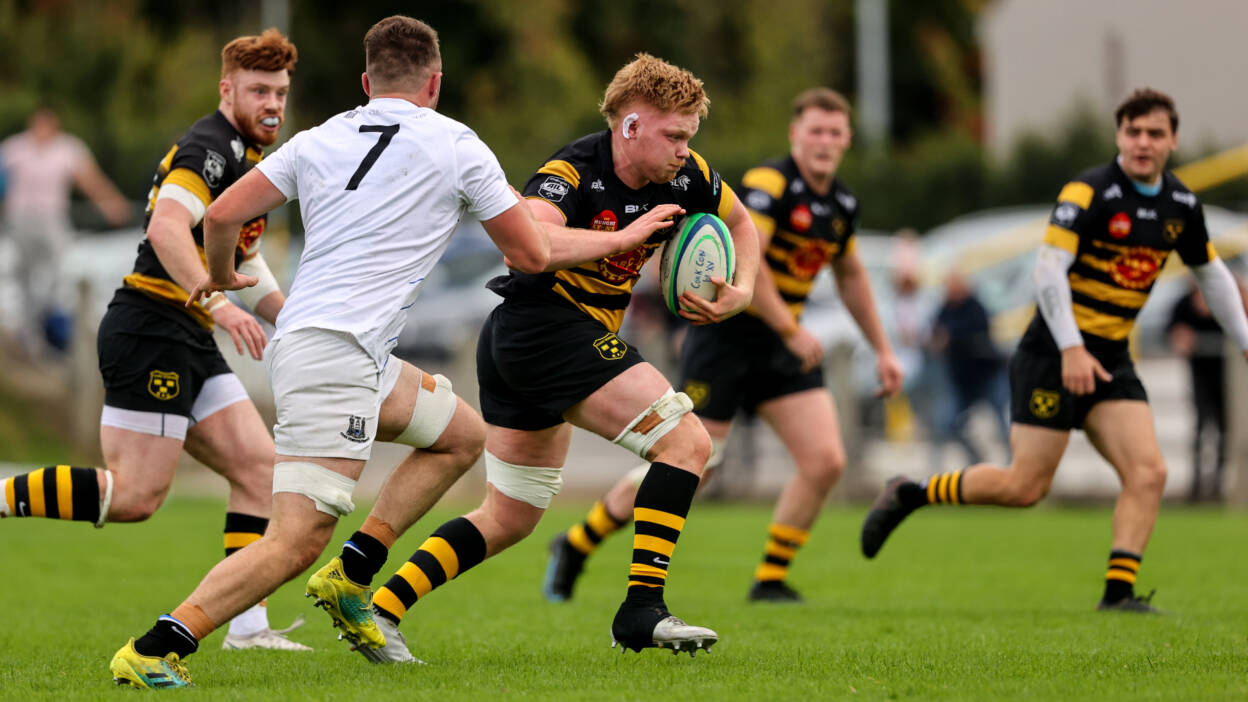 The pressure was building and the visitors were rewarded when captain Dan Walsh and Evan O’Gorman released Hayes, on the right wing, to evade Coomber’s tackle and crash over the line despite John Beamish’s last-ditch challenge.

Cusack sent the conversion wide to the left, leaving it 8-3 up to half-time as Cork Con failed to take advantage of a terrific 50:22 kick from Moynihan. Kelleher was stopped short and O’Gorman won a turnover penalty.

There was frustration for Munsters in blowing two lineout opportunities before the break, while Tom Goggin was able to pinch a Con throw after Moynihan had come up with a big touchfinder from a penalty.

Cusack missed a long range penalty early in the second half, before his opposite number Moynihan made it 8-6 courtesy of a well-struck kick from inside Munsters’ 10-metre line. 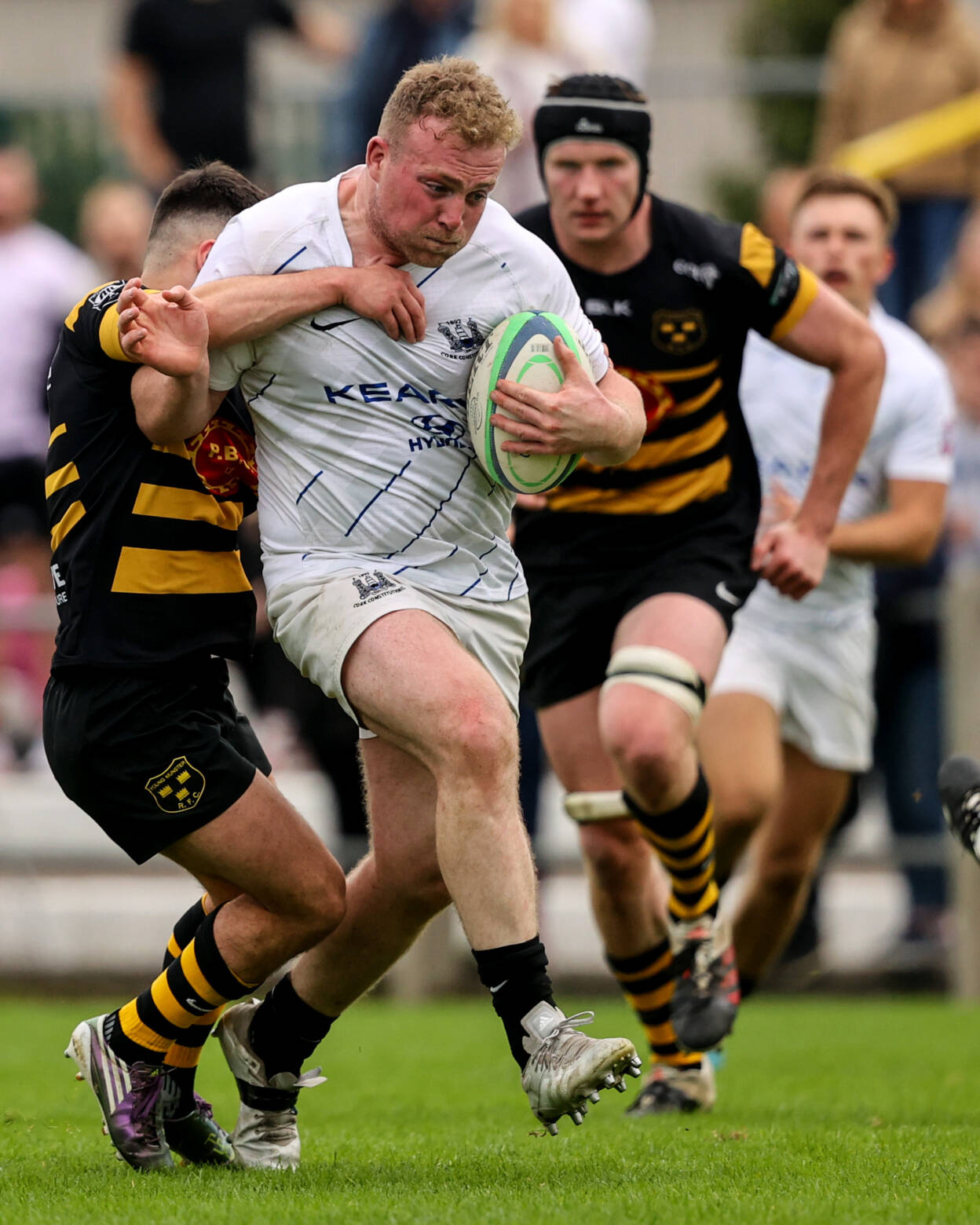 Cusack expertly put his side back into scoring range with a peach of a 50:22 kick, the Cookies pack getting their maul going and O’Sullivan carrying well amidst a series of pick and drives.

With Con caught narrow in defence and Coomber rushing up, Cusack flung a long skip pass out for Hayes to go over untouched. The winger’s second try was neatly converted by Cusack to open up a 15-6 advantage.

As the Cookies came looking for more, Con winger Michael Hand stood up well to tackle Shay McCarthy into touch. O’Sullivan threatened on the same wing a few minutes later, only for Hayes to be pinged for side-entry.

Beamish lifted Con with a turnover penalty, their backs playing with increasing tempo and then Cathal O’Flaherty, Brendan Quinlan and Beamish combined on a break from halfway. Possession was lost but Beamish’s breakdown win was turned into three points by Moynihan.

The gap was back to six points with 18 minutes remaining, and suddenly Con were flooding forward again as Higgins, Murphy and Niall Kenneally all took them over the gain line. Louis Kahn kept the pace high with a quick tap.

Benefitting from a quick recycle, O’Flaherty took contact just a few metres out and got an offload away for Murphy to brilliantly shrug off off two tackles and take Lyons with him in underneath the posts for a crucial try. 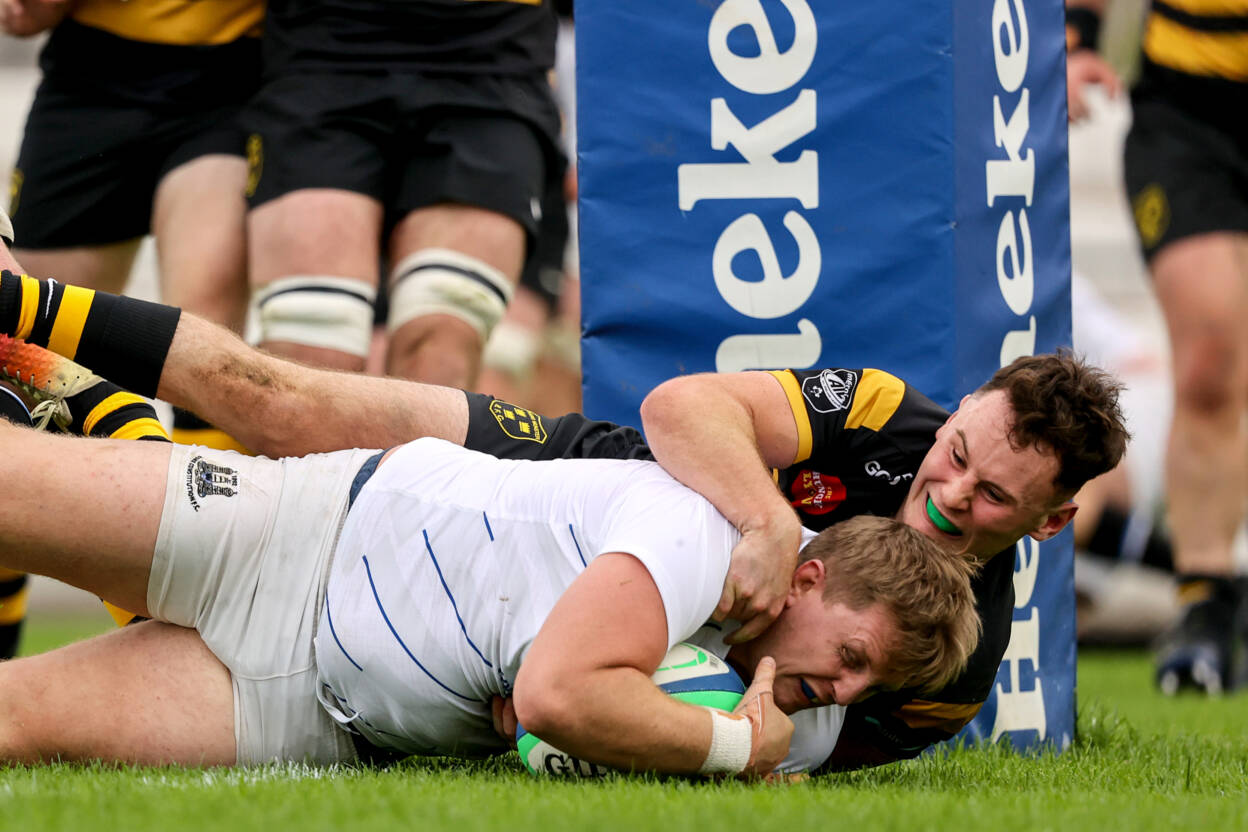 With the extras from Moynihan edging the hosts ahead for the first time, Munsters wasted little time in responding. Conor Nesbitt drew a high tackle and Cusack took the three points on offer to make it 18-16.

Moynihan flashed a drop goal wide and although Coomber then kicked out on the full, Con were able to hold firm in defence. Loosehead Quinlan came up with a big penalty win at the breakdown.

Former skipper Kenneally used the lineout possession to send winger Hand through a gap. He reached the 22 and when Con moved infield, Munsters conceded a penalty for offside. Moynihan coolly slotted the kick through the uprights to decide this bruising affair. 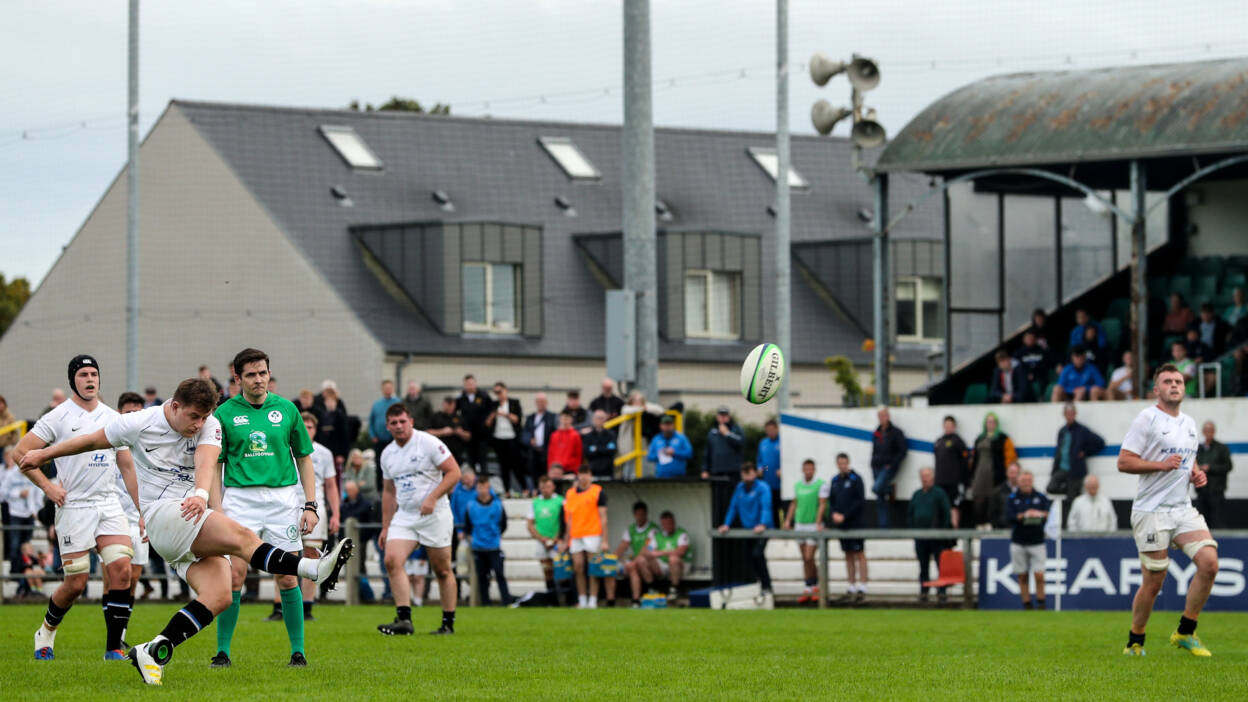