Enya Breen had two teenagers either side of her in Ireland’s midfield axis last Saturday. She has embraced her mentoring role, admitting that the learning goes both ways.

It was only three short years ago that the Munster star was making her own 15s international debut, but she is one of the more senior players in the backs division for the summer tour to Japan.

The first Test saw Breen deliver a commanding display in the number 12 shirt, flanked by the 19-year-old Aoife Dalton, a try scorer on her debut, and out-half Dannah O’Brien who, at just 18, kicked a dozen points while winning her first cap.

“I feel like I’ve had the confidence to do that now. I’m just backing myself a lot more and being able to pass on the information that I’ve learned from centres that I’ve played with before.

“Being able to see things from their point of view as well. I’m nowhere near the oldest on the squad so I know how they feel coming in.

“Having that experience and having the few years I’ve had in the bank beforehand kind of gives me the best of both worlds and I can pass on what I know as well.”

It was no surprise to see Breen highly praised in the various player ratings pieces from last weekend. Her running ability and deft passing helped to create two excellent tries for Aoife Doyle and new full-back Méabh Deely.

Japan found it tough to restrict the influence of a player who started her rugby journey with the Carrigaline minis before rising up the ranks at Bantry Bay and UL Bohemians. 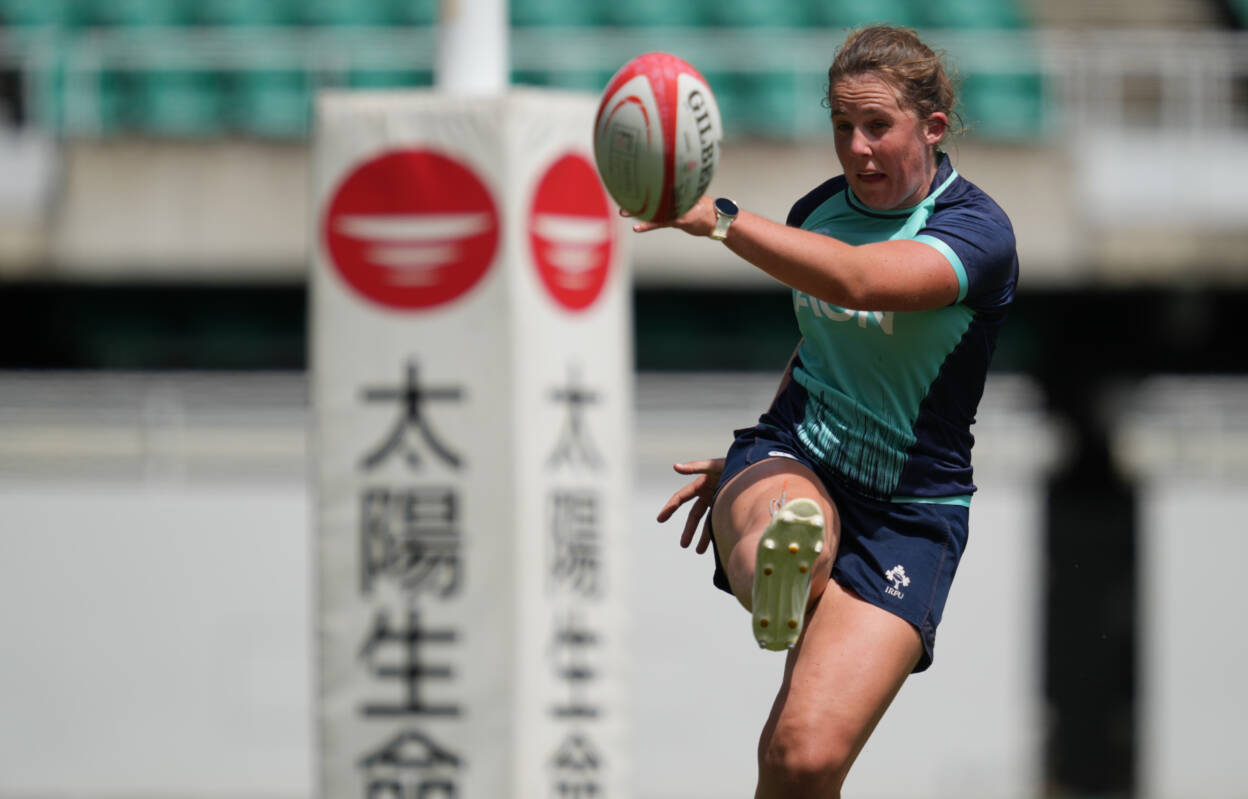 Breen’s physical attributes and footballing smarts have also seen her utilised as an out-half by Ireland, while she recently added another string to her bow and broadened her skillset by picking up her first Ireland Sevens cap.

Eager to get the job done this Saturday as Greg McWilliams’ side gun for a 2-0 series win over the Japanese, she acknowledged: “The spirits are high in camp at the moment. Everyone’s excited to have another opportunity to back up what we did last weekend.

On Sunday we looked back at the game. On Monday we put a bit of a plan in place for the weekend, learnt a few things that we can do better.

“Obviously Japan are going to come back fighting. We want to play smart as well, we’ve kind of tried to manipulate a few things and the plan is in place now.

“All we can do is build on that and try to keep it going throughout the week. Obviously we put a good score on them last weekend and we really want to back up in a few days’ time.”

This might be one of the brightest spells of her career, with success this summer in both codes, but Breen has experienced some low moments in recent seasons with injuries and, by her own admission, a loss of form.

Now back nearing her best, the physiotherapist from west Cork has responded to missing out on Rugby World Cup qualification in the best possible way, breaking back into the starting XV towards the end of this year’s TikTok Women’s Six Nations.

After a run of games covering the out-half position, Breen was brought back in at inside centre, replacing a Sevens-tied Stacey Flood, and was hailed for her match-winning heroics against Scotland in Belfast.

She has taken that form with her on tour, and despite missing out on a deserved try with a frustrating spill near the line, she said last Saturday was ‘probably one of my favourite days in the green jersey’. 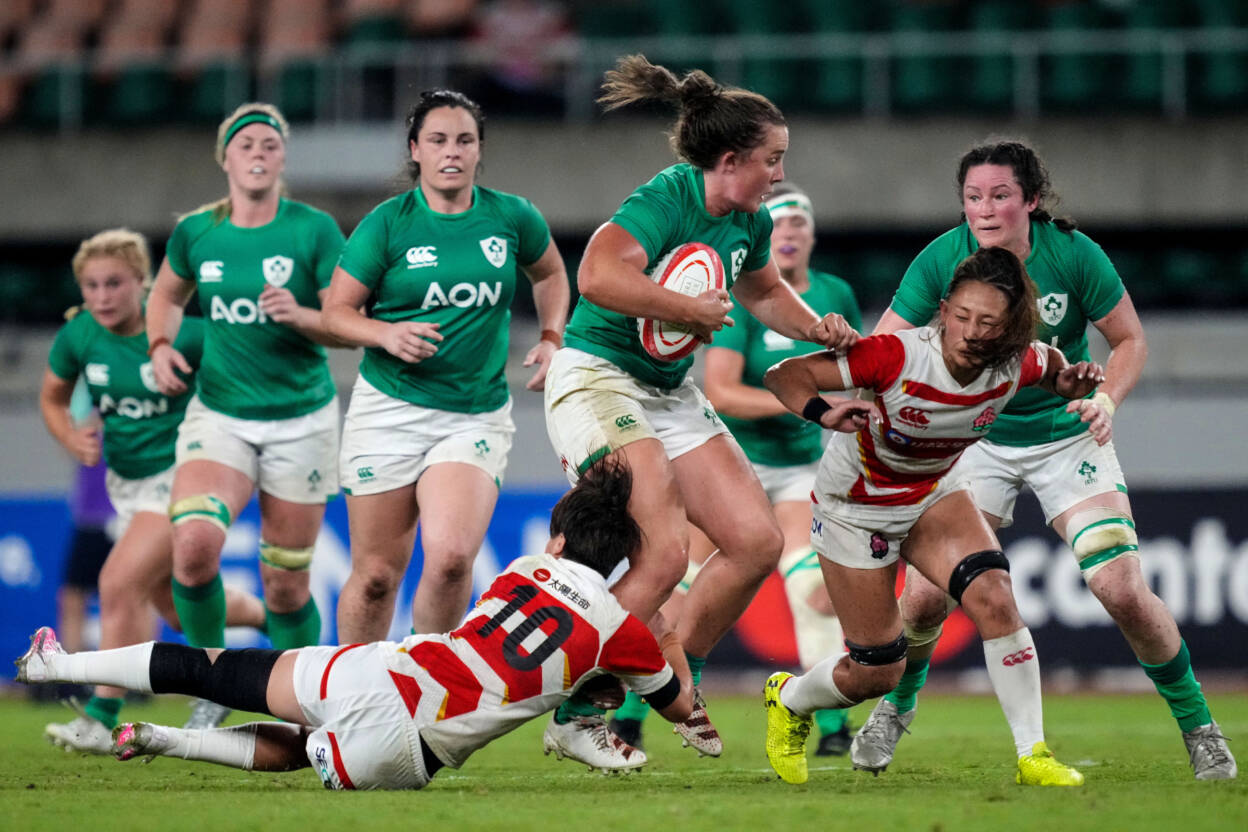 “Even if we didn’t start as well as we would have liked, there was no sense of panic and everyone was completely calm,” she insisted, referencing how Ireland had to chase down Japan after failing 15-0 behind.

“Everyone had that bit of belief that once we got on the ball and once we started to do what we know we could do that we’ll be well on top.

“Everyone’s happy in camp at the moment and we’re playing with a bit of confidence and ambition that we haven’t had much before. It’s exciting times and we’re excited to push on and see what we can do in the future.”

Breen’s classy distribution, coupled with the decoy running of Dalton, was a vital ingredient in the Irish attack for the series opener. She has been pleased to see the hard graft from the training pitch come to fruition.

“We’re doing a lot of work on passing at the moment. Before every session we’ve been kind of having a skills wheel, so it’s whatever focuses people have individually,” explained the 23-year-old.

“But there’s been loads of catch-passes, loads of kicking, and loads of kind of your basics of the game.

“I was glad to have the opportunity to show what I’ve been working on (last weekend in the first Test), and glad, I suppose, that the hard work is starting to pay off.”