Andrew Porter insisted ‘the job’s not done’ as Ireland target more of the same in next Saturday’s final Test of the series against New Zealand in Wellington.

Andy Farrell’s men have moved on to their last stop of the summer tour, buoyed by their history-making performance in beating the All Blacks for the first time ever on New Zealand soil.

Prop Porter played a significant role in the 23-12 second Test win, touching down at the start of both halves as he took his international try haul to four. He previously scored against England (2020) and Argentina (2021).

Taking it all in in the immediate aftermath in Dunedin, he said: “It’s an incredible group of lads to work with, bouncing back from last week (the 42-19 defeat) and putting out a performance today.

“Obviously we had a man advantage for most of the game, so we’ll have to put in a better performance next week. We wanna give these supporters something to cheer for.

“It’s very emotional creating a bit of history today but the job’s not done. We’ve the series tied now at one apiece. All that matters is next week now.”

Porter and his team-mates are coming to the end of a long international season that has delivered an unbeaten November campaign, Triple Crown glory, away victories over England and New Zealand, and the awarding of three new caps – Dan Sheehan, Mack Hansen and Michael Lowry.

This was also the season that saw the 26-year-old Dubliner move back to the loosehead side of the scrum. Apart from his brace of tries, he was delighted with the pack’s improvements as they won the set piece battle in the second Test.

“I can’t be more proud of the work the lads have put in over the last week to bounce back from last weekend. It’s hard to put into words how I feel right now, to be honest.

“It’s good to give these supporters something to cheer about. It’ll be even sweeter if we can pull off the win next week as well. We’ll put (our) all into next week because we’ve got nothing to lose. We’ll throw everything at it.”

Ireland’s post-match celebrations were short and sweet, a steely determination very evident at Forsyth Barr Stadium in the aftermath as players like Robbie Henshaw and Tadhg Beirne spoke about the desire to back it all up next week.

Henshaw, who has played every minute of the series so far, said: “What a Test match! I suppose it was full of surprises and twists, the amount of incidents in the game.

“We just talked to ourselves and said we need to keep the heads and go from moment to moment. Thankfully we came out strong in the second half because there was a shift of momentum at the end of that first half.

“We came out and we scored early in the second half and that really gave us the belief to go on. It’s all to play for (in the third Test).

“It’s top class football they play down here. It’s a different level as well and it’s where we want to be and it’s what we want to go for.”

"We came out here wanting to make history and it's an incredible feeling knowing we've done that." ✊

Lifting his game like those around him up front, second row Beirne pointed the way with two memorable charges – both off short Jonathan Sexton passes – on a night that he won two lineouts, made seven carries and 12 tackles, and beat three defenders.

The Kildare man was part of the Ireland squad that came from 1-0 down to win the 2018 series in Australia. It will take a huge effort to claim another series in the southern hemisphere, but the belief is very much there.

“I think last week we showed what we could do in patches. We probably looked at ourselves pretty tough, and we knew we could come out here and get a win,” admitted Beirne.

“Obviously they were down to 14 for the majority of that game, and we knew we had to capitalise on that and thankfully we did.

“The fans were incredible. There were moments there when we really needed them and you could hear them. They were noisier than the New Zealand crowd at times or most of the time. That’s very special. What a night.”

For a player that missed out on that breakthrough result in Chicago in 2016, Peter O’Mahony now has a trio of wins over the All Blacks to cherish. One more would certainly be the cherry on top for 2022/23.

O’Mahony was back to his lionhearted best on Saturday, consistently wielding influence in the air, at the breakdown and in the tackle area. His leadership and lineout ability were vital for the forwards and he never took a backward step.

The Cork-born flanker was understandably ‘pretty happy with that one’ when speaking after the game. He spoke about what it means to the 23 who features but also for the wider squad and those young players chasing first caps.

"I'm pretty happy with that one, winning in an Ireland jersey is special." 🙌

“We were talking about ‘firsts’ and it’s a big one to tick off for us,” he said. “I couldn’t be prouder. Winning in an Irish jersey is special, making memories like this. Winning is the thing that really brings a group close.

“To do it for the first time in New Zealand…huge credit to them, the All Blacks, for how long they’ve kept it out. Hugely proud of the boys. Incredible moment in everyone’s career, in my career.

“No matter whether you’re big Joe (McCarthy) or Johnny Sexton, as we’ve spoken about, this will stand to everyone of the touring members. Whether you’ve come out, whether you’re first picked. Massive day for everyone.

“It’s massive (next week). You’re talking about another series win in the southern hemisphere and that’s what we’re here to do. Compete and, as I’ve said, we’re here to win.”

A full 80-minute performance is the target for next weekend according to young hooker Sheehan, after Ireland conceded again before half-time – just as they did in more worrying fashion when leaking three tries in Auckland.

The two yellow cards and one red also severely impacted New Zealand, and Sheehan says the tourists were guilty of ‘not sticking to our systems’ and leaving scores behind them before a more composed second half display did the trick.

“We got that early try and then the game slowed down due to discipline problems from both teams, and we didn’t stay composed. We got a bit greedy trying to do our own thing,” said the 23-year-old. 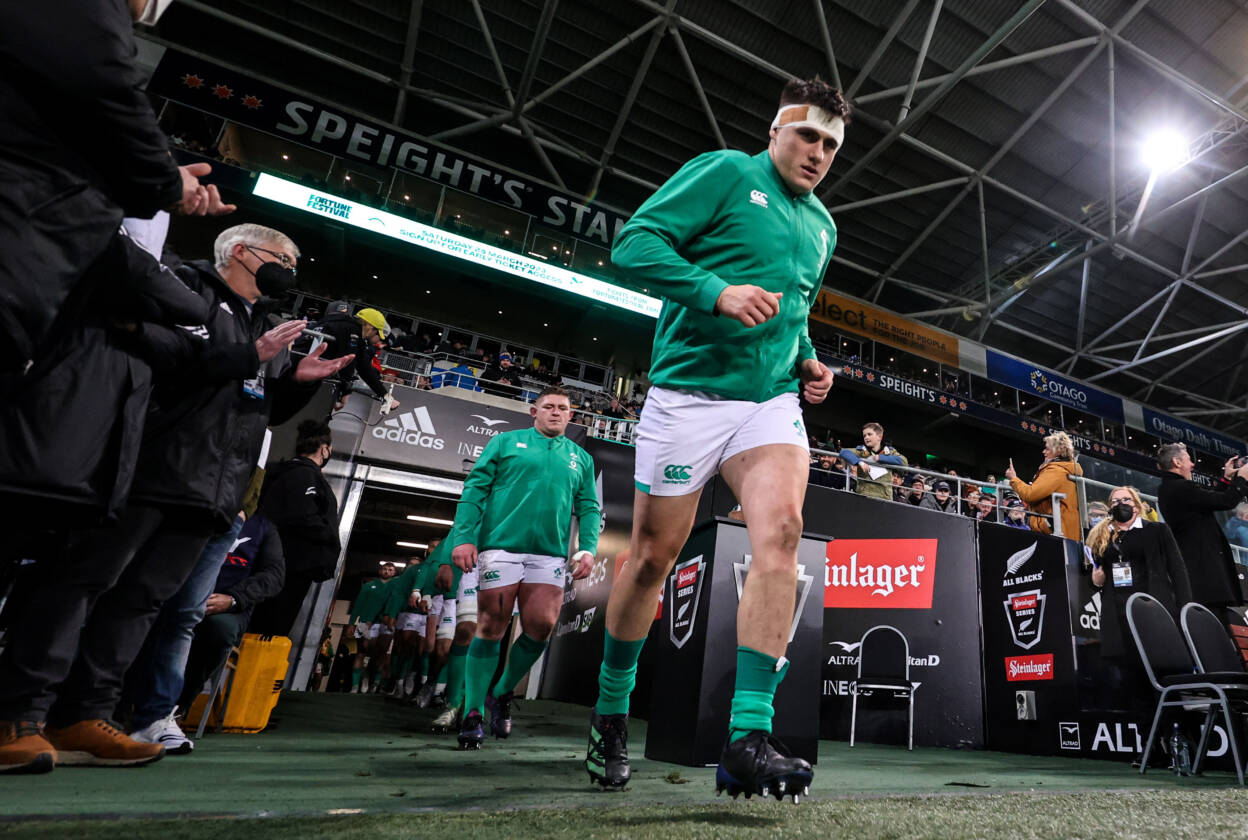 It is incredible to think that Sheehan is only nine matches into his international career, his first start coming in February against Italy and he has been on an upward curve since then.

The bread and butter of Ireland’s scrum and lineout needed to be sorted out for round two – forwards coach Paul O’Connell said the set piece was ‘poor’ at Eden Park – so it was satisfying to see the turnaround in fortunes.

As starting hooker, Sheehan was at the heart of that and reckons they have it in them to go up another level for Wellington next Saturday night.

“To be part of a history-making squad will be something that will stick with me for the rest of my life,” said the Leinster front rower, who has scored two Test tries against Argentina and Scotland.

“I think we’ve shown patches of what we can do and how we can cause New Zealand problems, but I think we need to get 80 minutes, an 80-minute performance.”

He added: “It’s something incredibly special to be a part of. We came here with the ambition to win a series, win all five games we had.

“Obviously we weren’t happy with last week. I think today’s (performance) was scrappy at times, but we played better today. Being a part of history, a first Irish team to win in New Zealand, is special. But we definitely have another game in us.”