The Ireland Under-20 squad, led by captain Reuben Crothers, line up for the anthems in Verona ©INPHO/James Crombie

Murphy has made four changes to his starting XV for the round 3 fixture, bringing Ethan Coughlan, Scott Wilson, Adam McNamee and Lorcan McLoughlin back into the side.

Patrick Campbell, Aitzol King and Dylan O’Grady continue in the back-three, with Fionn Gibbons and Daniel Hawkshaw starting together in midfield for the third successive game.

Munster Academy scrum half Coughlan returns to the side to partner Sam Prendergast, who kicked seven points against South Africa, at half-back.

In the pack, Queen’s University clubman Wilson slots into the front row alongside George Hadden and James McCormick, with McNamee from Malone selected to pack down with Conor O’Tighearnaigh at lock.

Diarmuid Mangan switches from the second row to blindside flanker and McLoughlin, a lively half-time replacement in the last round, completes the back row alongside captain Reuben Crothers.

Murphy has plenty of options on the bench – including debutant hooker Dominic Rhys Hey – with teams allowed to name an extended matchday squad of 26 players for the tournament in Italy.

“I think the guys have shown great character all through the Summer Series so far,” said Murphy. “Firstly with France, we got them on a really good day, and then South Africa were very big, very powerful.

“It’s a big learning curve for us. We’ve got a new group together, quite a few young lads have come in since the Six Nations.

“It’s going to be difficult (against England). It’s another massive, big physical challenge. England have size about them.

“We just have to look after ourselves, tidy our own game up and go back to the basics of ball carrying and looking after the ball, the clean out and imposing our game on England.” 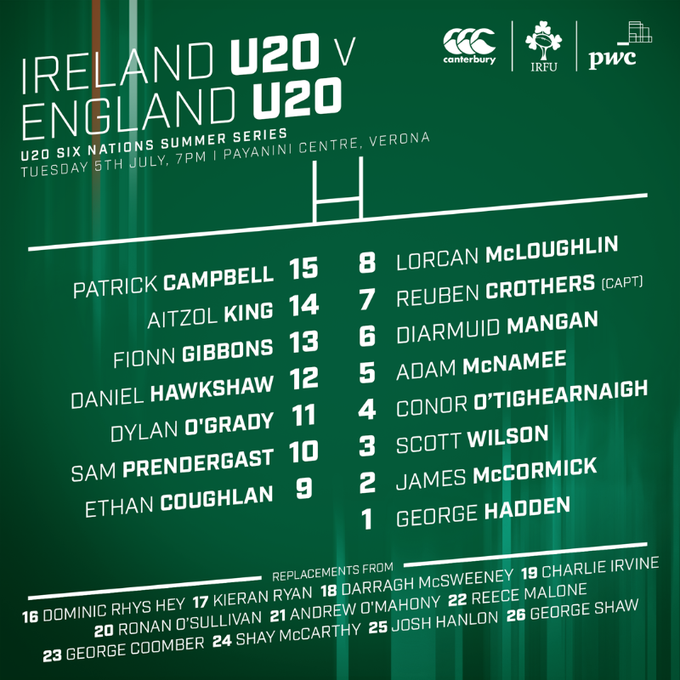