The Ireland Women’s Sevens team, sponsored by TritonLake, added another historic achievement to this season’s ledger by winning the Krakow 7s title, beating hosts Poland 21-17 in the final.

Aiden McNulty’s side went unbeaten across the weekend, qualifying for their first ever Rugby Europe Sevens Championship final and picking up the trophy thanks to a late try from captain Lucy Mulhall.

In a year in which they had breakthrough silver and bronze success on the World Series, the Krakow gold comes as a timely boost ahead of the Rugby World Cup Sevens qualifying tournament in Bucharest in two weeks’ time.

Amee-Leigh Murphy Crowe, who sat out last week’s first European leg in Lisbon, was back in terrific form with 10 tries. She scored in every game and ran in a hat-trick in the 26-0 semi-final win over Spain.

It has been encouraging to see Anna McGann, Lucinda Kinghan, Claire Boles and the 19-year-old Vicky Elmes Kinlan making the most of their game-time. Megan Burns also showed her finishing skills with six tries across the two legs.

The Ireland Women, who accumulated 34 points across the two tournaments, finished second in the overall Rugby Europe Championship Series – they were also silver medal winners in 2017 – behind first-time champions Poland (38 points). Scotland (32) completed the podium places. 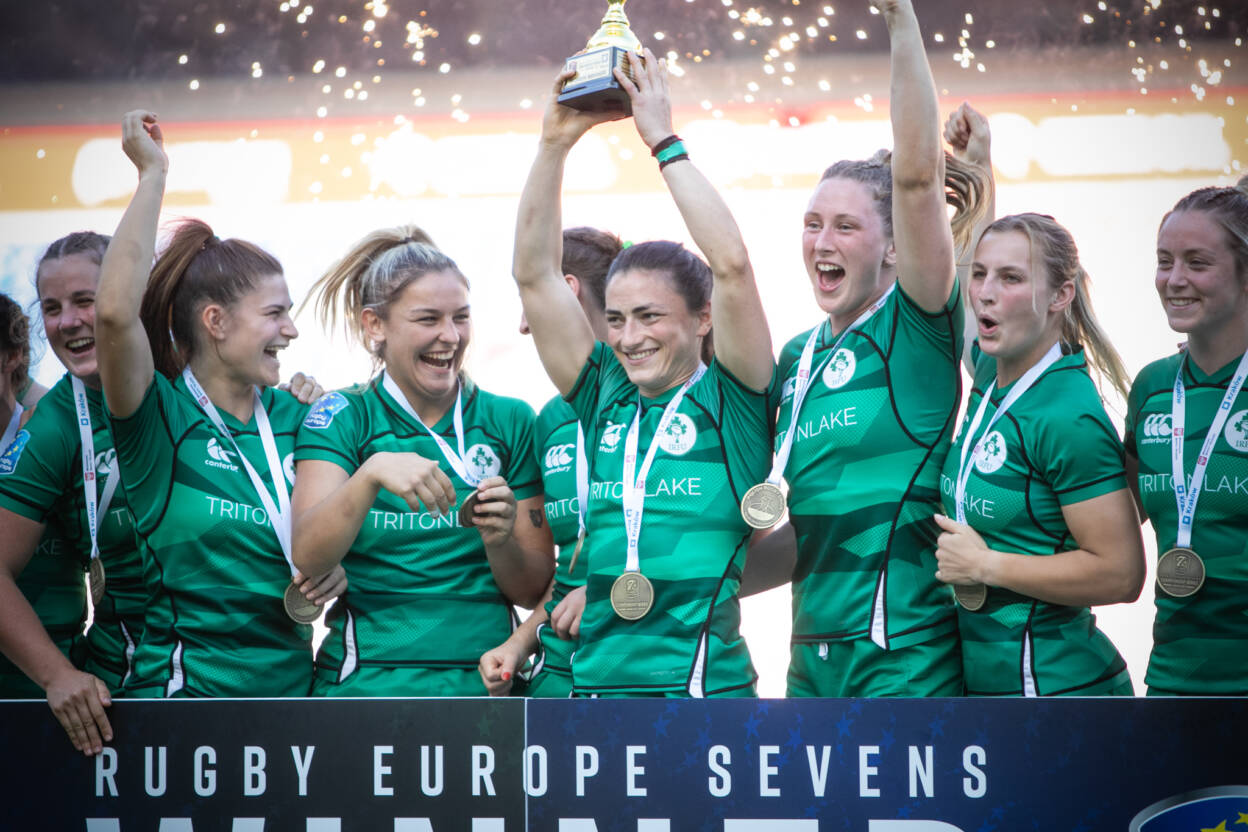 It has been a very good summer so far for the IRFU Sevens Programmes, with the Ireland Men recently crowned Trophy champions after back-to-back tournament wins, while the Women’s side reigned supreme in Poland.

Both squads are off to Romania on July 16-17 with the twin goal of qualifying for the World Cup, which takes place in Cape Town in September. Ireland’s two Under-18 teams are also in action this month in their respective Rugby Europe Championships.

Familiar rivals Ireland and Spain played out a cagey opening to this morning’s semi-final, the girls in green dominating territory but unable to force a score until the fifth minute.

Mulhall pinched possession in a tackle, drove forward and released Murphy Crowe who broke into the 22 and did well to ground the ball despite Beatriz Dominguez’s last-ditch tackle.

Ireland struck again just past the half-time hooter, a pacy attack unleashing Murphy Crowe who brought them downfield and from the ruck, Mulhall cleverly broke down the blindside to score in the left corner.

Leading 12-0 at the turnaround, a McGann turnover penalty saw Ireland maintain the momentum. Scores were hard to come by, but once again Murphy Crowe’s pace proved too much for the Spanish defence.

Replacement Heffernan fed the Tipperary native off a scrum and she outpaced Ingrid Algar on the outside to make it 19-0 with just over 90 seconds remaining.

Ireland wrapped up a convincing triumph with a late fourth try, their star winger completing her hat-trick by handing off Raquel Garcia after Erin King had dived on turnover ball on the ground. 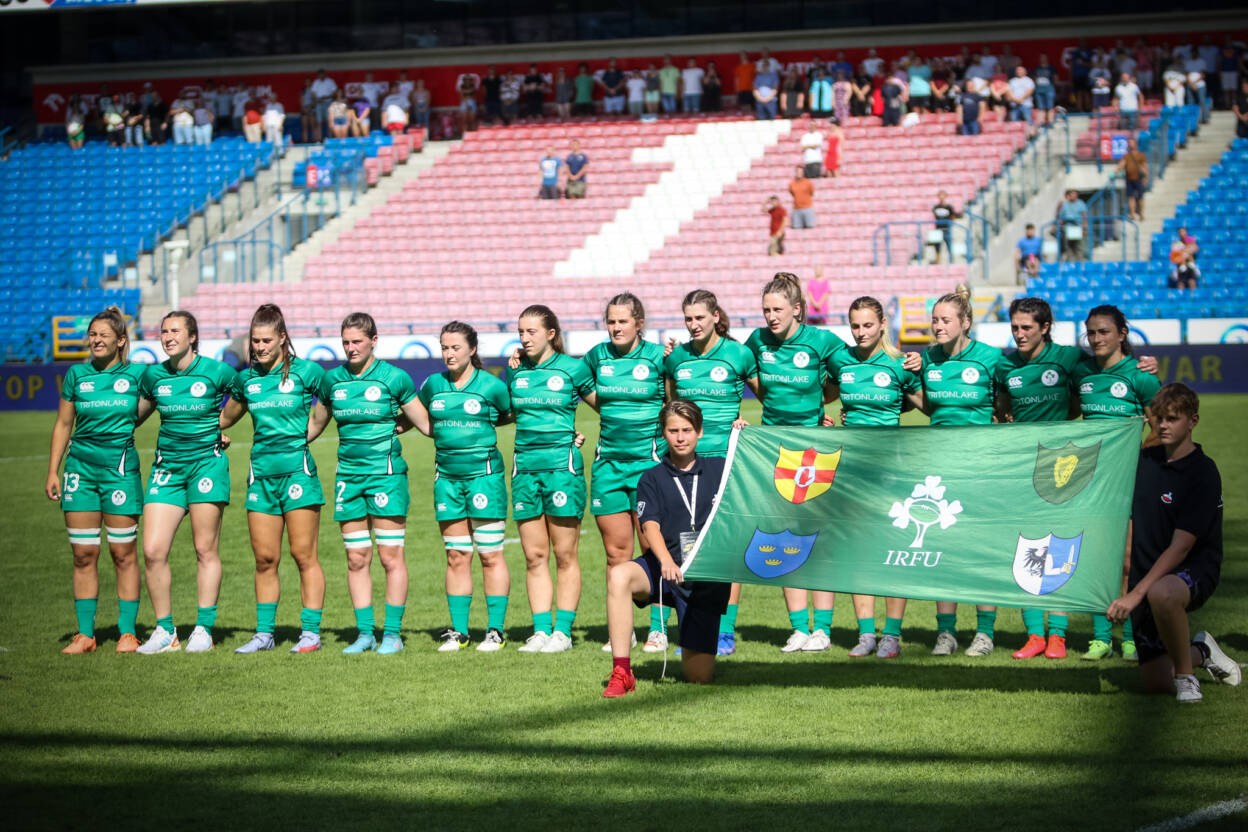 Poland came with an early surge in the Cup decider, a well-worked attack seeing Anna Klichowska cross out wide on the left for an unconverted third-minute try.

McGann made an important tackle to stop a promising Polish attack, but once Ireland were given a sniff in attack, they were able to pick off two crucial scores.

Luck was on their side when Burns lost the ball in contact near halfway, Murphy Crowe were quickly on the scene to collect a favourable bounce and sprint clear for a try converted by Mulhall.

The battle for possession intensified, Ireland seizing scrappy ball and swiftly returning to the Polish 22 where King, an impressively consistent performer at just 18, neatly jinked past two defenders to make it 14-5 at the break.

Although Murphy Crowe did well to defend a dangerous kick through early in the second half, Poland replied by winning a turnover penalty. Some smart passing put the strong-running Klichowska over for her second five-pointer.

With their lead cut to four points, Ireland came under further pressure as the Polish side – roared on by a partisan home crowd – won the restart and Natalia Pamieta managed to slice through to score from the right.

Poland captain Karolina Jaszczyszyn converted from straight in front with just under three minutes remaining, yet there was no panic from the girls in green who won back the high, hanging restart through Mulhall.

Just on as a replacement, Boles carried powerfully and Stacey Flood craftily put a well-weighted kick downfield where Murphy Crowe was first to reach it.

Kinghan and Elmes Kinlan also added energy off the bench, helping to retain possession in the Polish 22 before Mulhall brilliantly weaved past two defenders, including a diving Klichowska, to score the match-winning try.

There were a tense few moments from the restart, Poland forcing a penalty in their own half but Murphy Crowe’s hard work at next breakdown won the decision for Ireland and Mulhall gleefully found touch to seal the victory.