The final scoreline may have been a difficult one to take, but Ireland captain Nichola Fryday expressed her pride in her team-mates’ efforts against England who are gunning for a TikTok Women’s Six Nations Grand Slam.

While the hosts turned on the afterburners in the second half of the contest, Ireland had frustrated them with some excellent defensive work during the opening 40 minutes at Mattioli Woods Welford Road.

Trailing by just 10 points, the Ireland Women had put it up to the reigning champions and the world’s number one-ranked team, and this is something Fryday was keen to focus on.

“I’m extremely proud of the girls, especially for that first half performance. We really brought it to England for that first 40 minutes and they showed that they’re world class then in that second half,” she admitted.

“You can’t question the girls’ fight throughout that whole match and I’m extremely proud of them for that.”

Of course, Greg McWilliams’ charges were disappointed with how the game eventually finished. England clinically capitalised on Dorothy Wall’s sin-binning and Sene Naoupu’s subsequent red card, scoring five tries while they were off.

Fryday acknowledged the qualities that ultimately led to England claiming such a convincing victory, saying: “I think it’s probably their power game, their set-piece. It’s a real weapon that they have.

“We tried different ways of diffusing it, but it was just world class and that’s what we need to strive to get better at and be able to handle that kind of pressure. They’re just clinical in everything that they do.

“They have that fitness level from training all week and they’re able to execute their system that efficiently and clinically. It’s just that they get the opportunity to rep that continuously throughout the week.

That’s the position they’re in and we’re in our position. That’s not the reasoning either. It’s just a step up that they’ve gotten and we’ll continue to strive to get there as well.

“I think the teams we’ve come up against, this year’s Six Nations has gotten tougher and tougher. England are that step above everyone else, but at the same time it’s just rugby.

“You go out and you make your tackles, you chop low and you get one high. If you implement that system or process, it makes your defence very easy and simple. I think that’s what we did do in the first half.”

Before the post-press conference got underway in Leicester, Fryday – speaking on behalf of the entire Ireland squad – offered condolences to the family of Kate Moran, the Athenry camogie player who sadly passed away earlier in the week.

“The squad’s condolences are with Kate Moran’s family this week. It was a tragedy that happened in Galway and we just want to let her family and her friends know that we’re all thinking of them at this time,” she said. 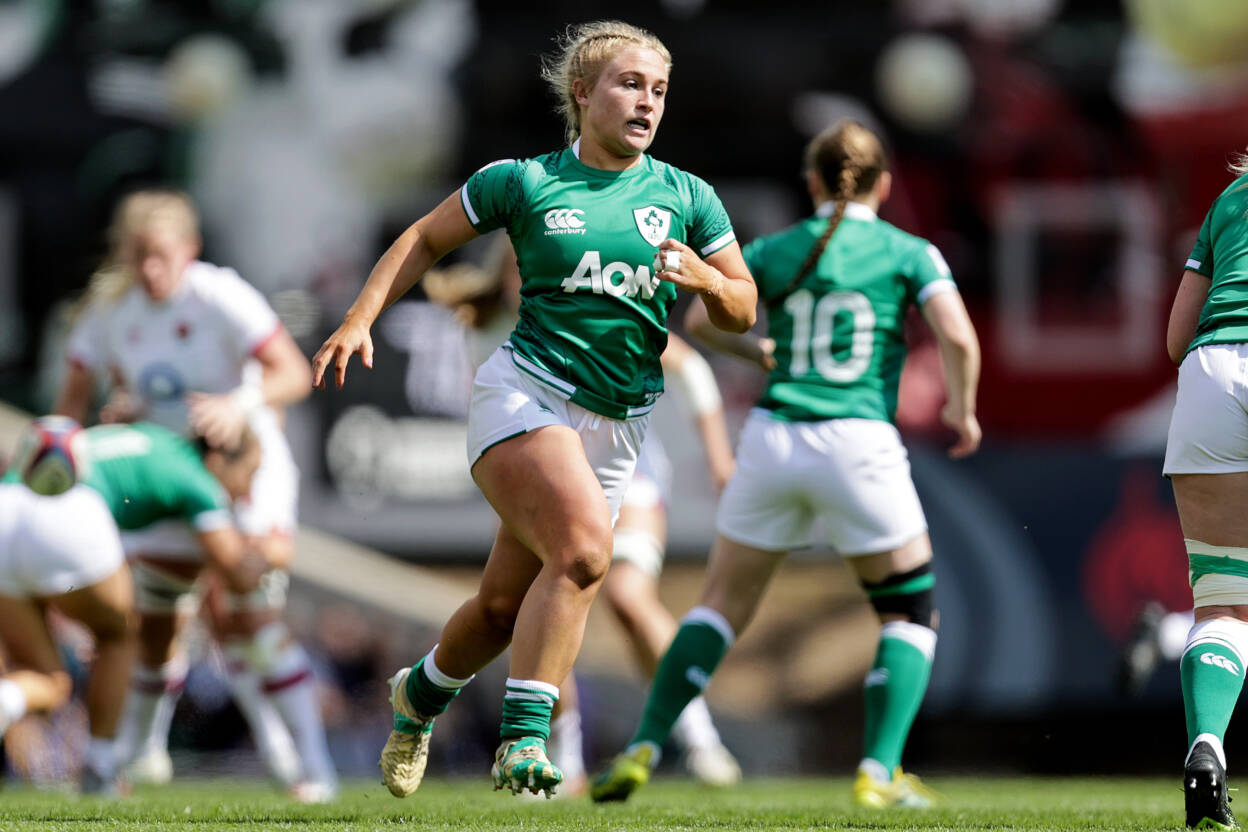 Meanwhile, with their final game of the Championship against Scotland taking place at Kingspan Stadium next Saturday (tickets are available to buy here), hooker Neve Jones will be doubly determined to drive Ireland to their second victory.

The Ballymena native has been one of Ireland’s best players during the 2022 tournament – her try against Italy and tigerish tackling standing out – and will be aiming to end her first full Six Nations campaign on a high.

“Scotland have been playing well in the Six Nations. It’s a game that we will look forward to,” said the 23-year-old, speaking in the aftermath of the 69-0 loss to England.

“We will put our heads together as a squad, get ready to go again and just build. We will definitely take lots from that (first half). The girls were warriors all day.”

While her influence on the lineout is growing, Jones impressed again as one of Ireland’s leading tacklers against England with 14 tackles landed, six of them dominant ones – including a huge hit in the second half on England full-back Helena Rowland.

“Listen, it’s a huge part of the game. It’s something I enjoy doing. If someone is going to run at me, I’ll do everything I can to stop them going anywhere. Hopefully I’m doing an alright job of that.”

The 2020 Energia All-Ireland League Rising Star award winner was part of the Ireland squad that lost out to Scotland in heart-breaking fashion at last year’s Rugby World Cup Qualifier shootout in Parma.

The new McWilliams-led coaching team have come on board since then, six players have made their debuts and a number of new combinations have been tried out as players look to bed themselves into the starting XV. 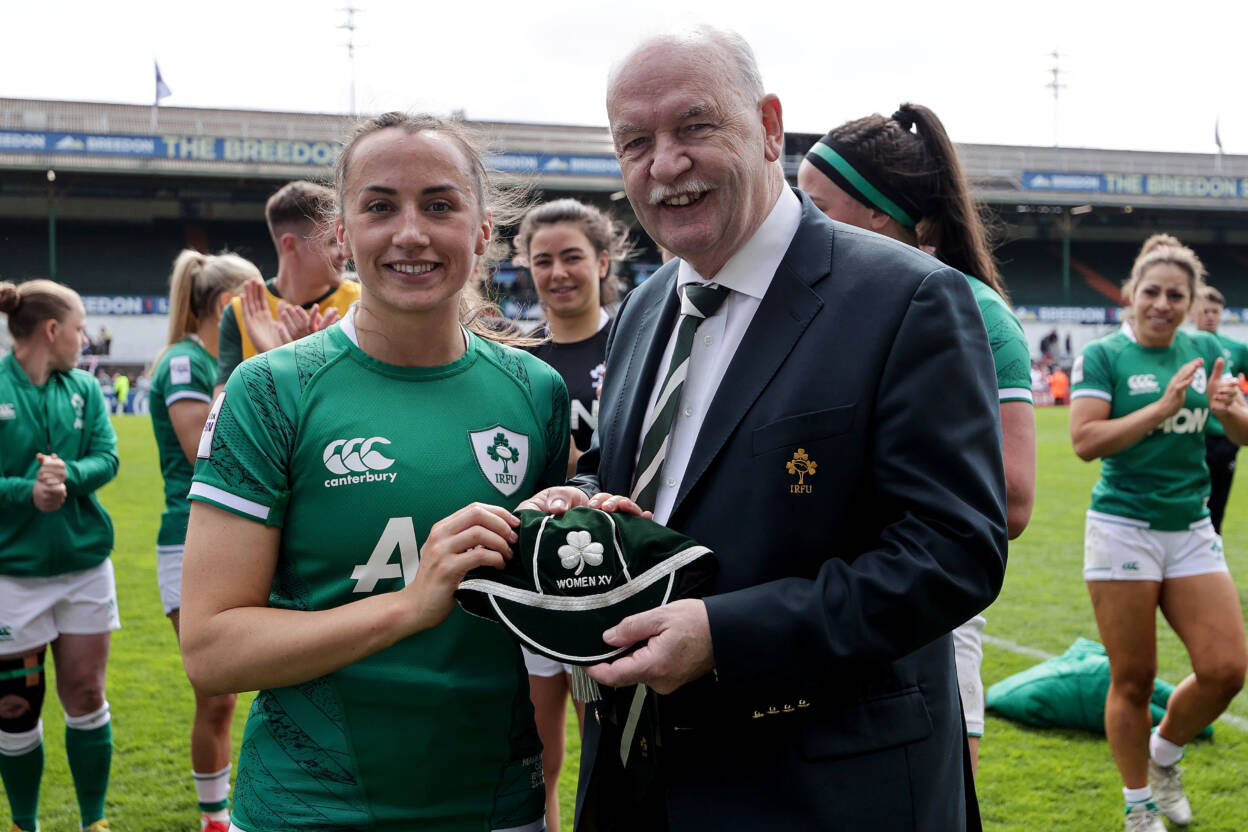 Revenge against the Scots will be on some minds, but for Jones the focus will be on rallying together, showing the strong bond that has already developed within this new-look squad and putting in a complete 80-minute performance that will deliver a result.

“The first half was definitely the way we want to play. I can’t be prouder of them in defence, attack we are building week in, week out. We’ll just build on that going into next weekend.

“We’re a young squad. Greg has come in and done a fantastic job of unifying the squad. I think you can really see that on the pitch, we stick together and we have got each other’s backs.

“We will always have that from the very first whistle to the last. We’ll go again next Saturday,” she added.