It is semi-final time in Energia All-Ireland League Division 2B, with Greystones and Belfast Harlequins, who swooped for second spot in the last round, both looking to make home advantage count.

Greystones won eight of their nine home fixtures during the regular season, a big reason why they finished top of the table and averaged 36 points per game. Kevin Lewis’ men are determined to regain the Division 2A status they lost in 2018.

Galway Corinthians are dangerous opponents, especially as they beat ‘Stones 33-21 out west last month. Skipper Aaron Broderick and Peter Claffey are quality operators at lock, while Josh Rowland, the ex-Ireland Sevens international, and Connacht prospect Cathal Forde can light up their attack.

Belfast Harlequins’ seven wins on the trot, including a 23-20 success against Blackrock College, earned them a home semi-final. Assistant forwards coach Paddy McAllister was sprung from the bench as ‘Quins won some crucial scrum penalties in that ‘Rock game.

Blackrock were also beaten 22-20 at home by ‘Quins, who struck late with a 13-man maul try. Their revenge mission will be led by skipper Brian Colclough, Matthew Cosgrave, Peter Quirke and James Fennelly, the former Trinity out-half.

Harlequins flanker Jaz Andress commented: “This is probably the most important game for the club since our relegation play-off against Omagh in 2018. We recognise it’ll be a tough encounter against Blackrock given our previous two games this season have been so close.”

Avoiding relegation would give Galwegians a much-needed lift in this their centenary year. They had the pain of being relegated in 2016, 2017 and 2019, dropping down from the top flight to Division 2B, and there will be a change of coach in the summer.

‘Wegians won 20-14 at Connacht rivals Ballina in round 18, with first half tries from Matt Dever, Finn Wright and Conor O’Shaughnessy setting the tone. Cian Quinn and captain Luke Sweeney both touched down for the Moy men.

Ballina only lost by a point when they last visited Glenina and know they are capable of turning these two results around. Driven on by Sweeney, Mickey Murphy and Fergal Tully, they are aiming to recapture their early season Connacht Senior League-winning form. 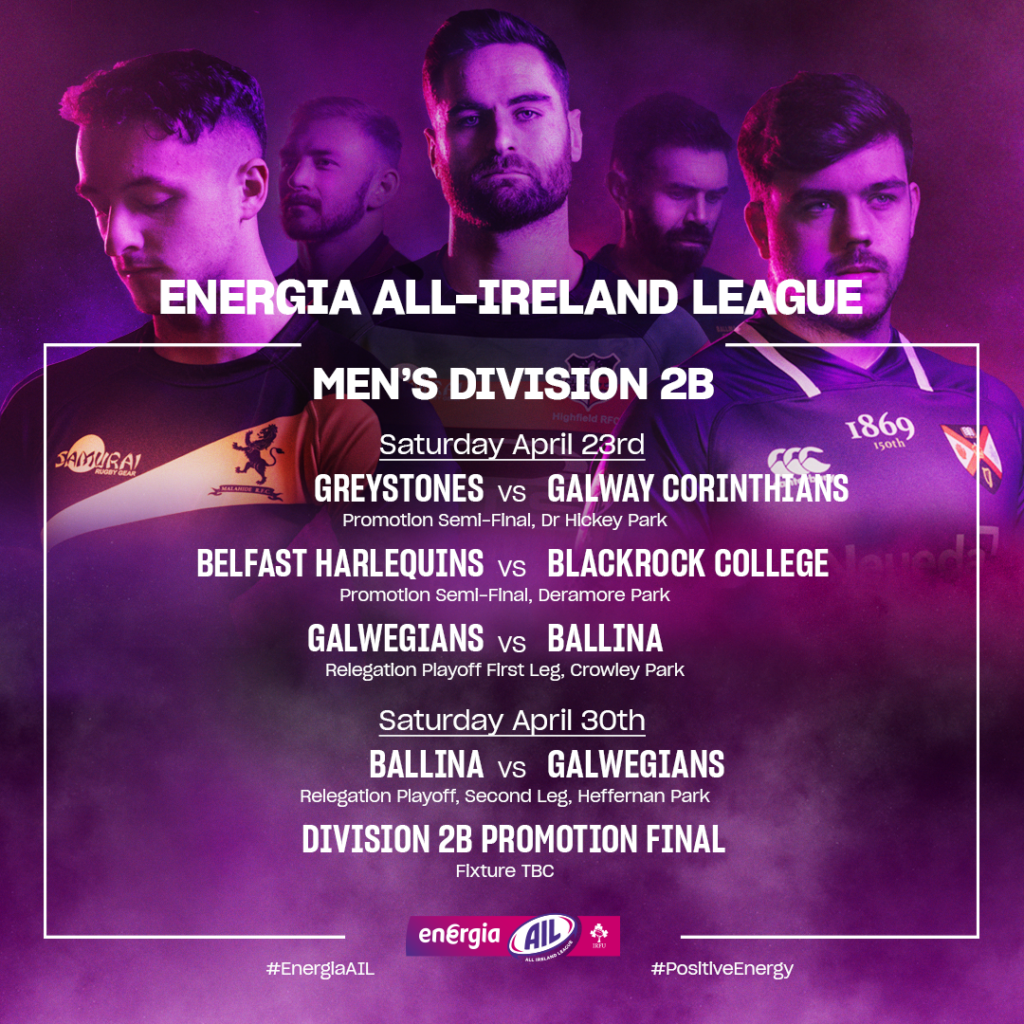