Almost 30 points separated them in the Division 2C table, but anything can happen in play-off rugby as Tullamore travel to promotion favourites Enniscorthy. Clonmel and City of Derry also begin their two-legged battle to avoid the drop.

Enniscorthy head into tomorrow’s play-off semi-final with a good degree of confidence – they won 15-12 at Tullamore in October before last month’s runaway 41-14 home win – but are bracing themselves for a thorough test from the Offaly men.

Buoyed by the try-scoring exploits of Nick Doyle and Ivan Jacob (12 each), ‘Scorthy captain Tomás Stamp said: “You know what you’re getting when you’re playing Tullamore, it’s going to be a fight for the whole match. It’s going to take us playing well and playing our game, going our route. They’re a serious side.”

Tullamore are very much the underdogs, but have some pacy young backs, including Zimbabwean centre Lance Batten, and a gnarly pack. If they can put Enniscorthy under pressure for sustained periods, they will give themselves a chance.

Skerries have young full-back Ronan Mulcahy’s last-gasp penalty in Omagh to thank for home advantage in their semi-final. Bangor venture back to the north Dublin coast, determined to avenge January’s 14-13 defeat on Holmpatrick’s 3G pitch.

Gareth Millar’s missed touchline conversion was the difference on the scoreboard that day, but Tom Rock’s Bangor side did win 27-15 when they hosted Skerries in December, aided by closing tries from Shay Storey and Mark Widdowson.

This is the Goats’ shot at promotion that they missed out on when Covid-19 cancelled the 2019/20 season just as they were leading the table. Captain Kevin McGrath, Paul O’Loghlen and Ross McAuley will be doing their utmost to ensure a home victory.

This is actually Clonmel’s first time to play City of Derry in Ardgaoithe since February 2020. Ian Keatley’s charges had to move their February fixture to Fethard Town Park’s all-weather surface. A big scrum clinched a late penalty try and 27-12 bonus point win.

It is one victory apiece from this season’s meetings, with Derry prevailing 9-6 at home in November. They have the form coming into this relegation shootout, having beaten Sunday’s Well and Tullamore and also run Enniscorthy close.

With Simon Logue, Davy Graham and David Lapsley inspiring their attack, Derry head coach Richard McCarter said: “We were brilliant against Tullamore on an ultimately disappointing day, but this squad is growing by the week. Two more cup finals to go. Everything is in our hands.” 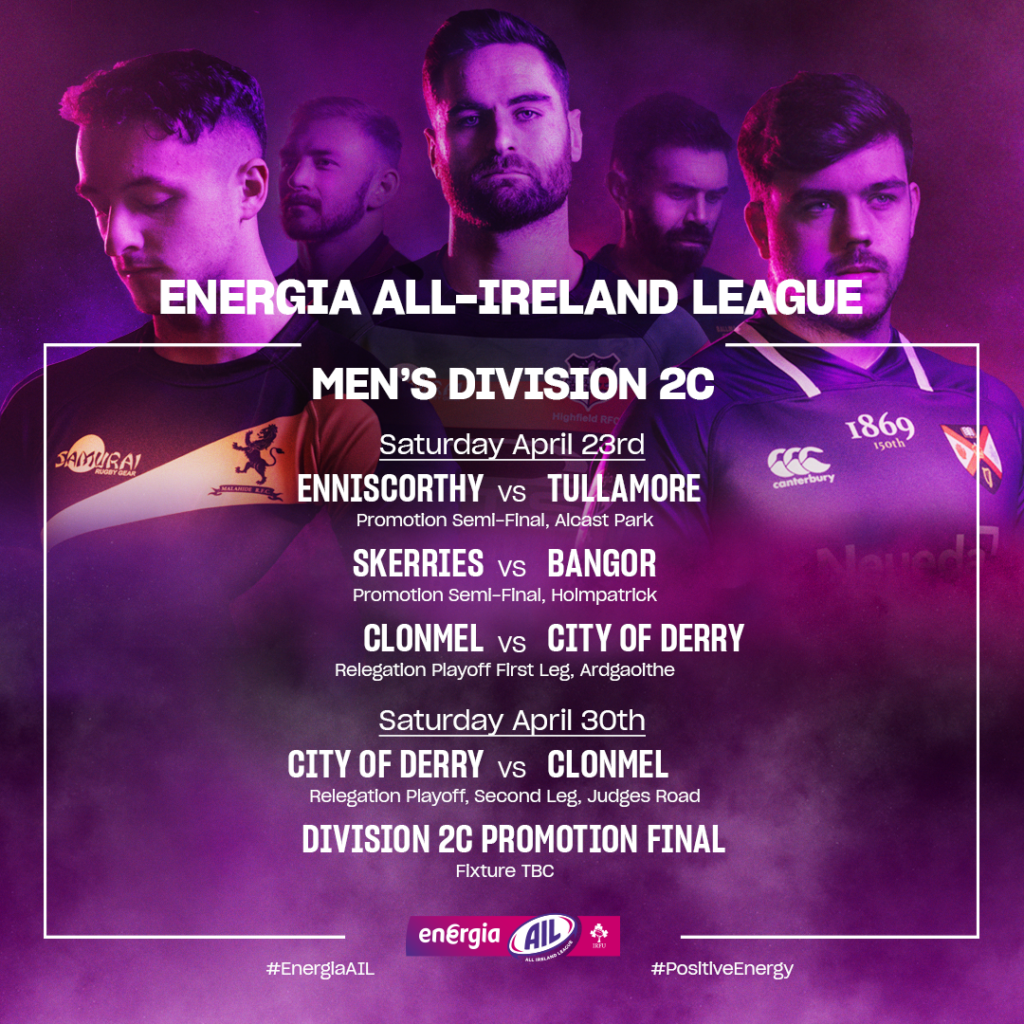