The Ireland Under-19 players and management team are pictured at St. Mary's College RFC, the venue for today's second match against France ©INPHO/Laszlo Geczo

Ireland Under-19 head coach Kieran Hallett is hoping for improved conditions today at St. Mary’s College RFC as his charges aim to show more of their attacking abilities against France.

In Pics: Ireland Under-19s Train Ahead Of Rematch With France

The wind and rain made for a forwards-dominated clash at Queen’s University on Wednesday, with three of Ireland’s four tries in the 26-21 win coming from mauls or pick and drives.

This is this group’s first experience of international rugby, on the back of two Covid-19-affected seasons, and Hallett has been impressed with how quickly they have come together in their units and built a strong team bond.

“How tight they’ve become and the friendships and relationships that have clearly developed, that’s all credit to them,” he said.

“They’ve worked hard as a group to develop that and hopefully it bodes well for the Under-20s next season.

“I came in for my first camp only at the end of March. We had another two-day camp at the beginning of April, then met up last Friday, so it’s been a pretty short run-up in terms of preparation.”

Hallett, an Elite Player Development Officer with Leinster, is heading up an Ireland age-grade coaching team for the first time. Before that he was defence coach to the Ireland Women’s team.

He is enjoying working in the U-19 set-up, assisted by Andrew Browne from Connacht and Munster’s Mark Butler. They both had a key influence on that opening victory, with the Irish maul doing damage and their defence standing up to prolonged periods of pressure.

“I’ve really enjoyed watching the group grow and develop. There are differences between coaching young lads and the Women but that’s been a coaching challenge I’ve really enjoyed,” acknowledged Hallett, a former Ireland Under-21 international who had playing stints at Cornish Pirates, Nottingham, Plymouth and Ulster.

“Coaching the Women’s side for two seasons really helped me develop a lot as a coach and I owe them a lot.

“Our maul was excellent in the first game in both attack and defence which is a huge credit to Andrew, and Mark has done a great job with our defence as well.

“But what impressed me the most was our ability to adapt to the conditions which were pretty poor, think our way through the game and find a way to win.” 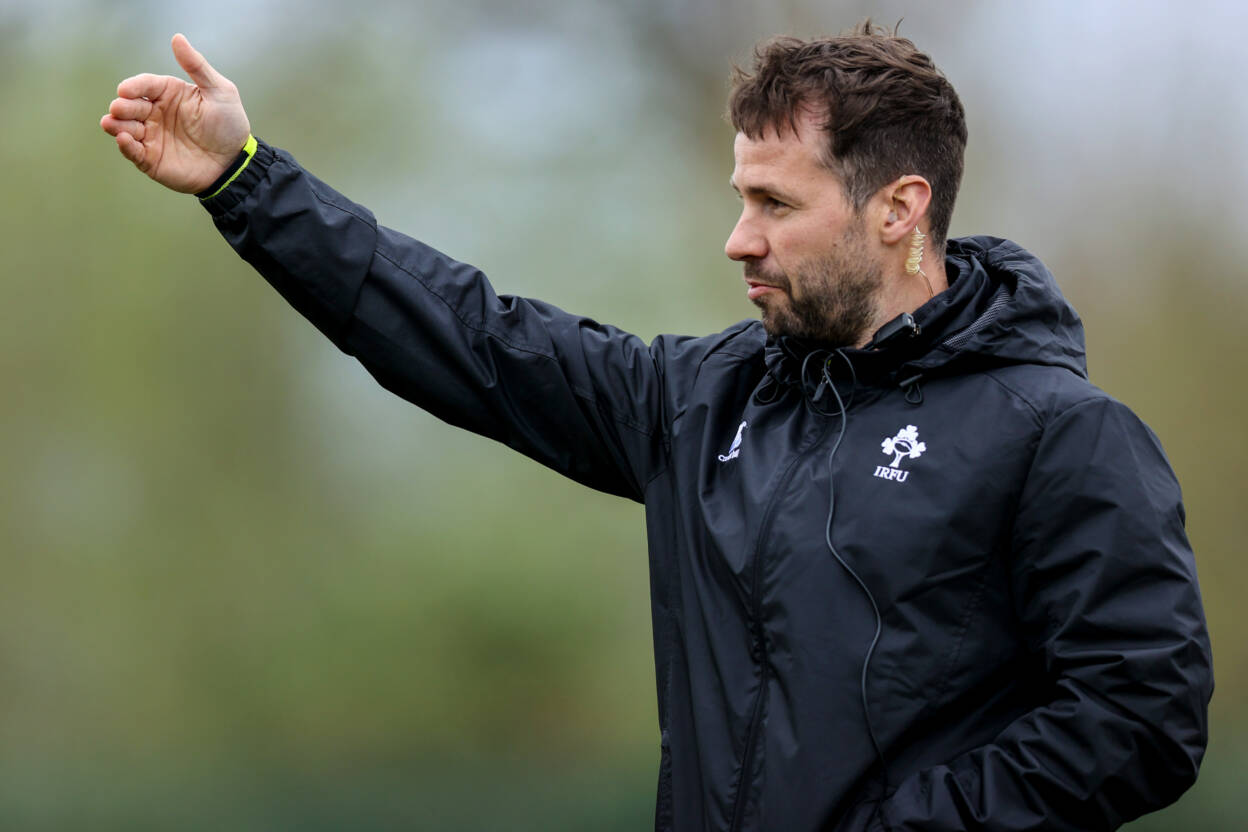 He added: “As a coaching group we were definitely aware that this would be the group’s first taste of age-grade international rugby. This just meant that we had to try and explain what the step up in intensity would be like.

“Having James McNabney and Diarmuid Mangan, before he got injured, who had experienced it with the Under-20s was invaluable for the rest of the group.”

The fact that Ballymena lock McNabney was playing U-20 Six Nations rugby at the age of 18 shows how highly he is regarded. Following on from the Grand Slam win, he has taken on the captaincy of the Ireland U-19s with relish.

The Ulster prospect delighted the Belfast crowd with a barnstorming run to set up Ihechi Oji’s early try against France, and Hallett commends him for his leadership of the side and his all-round play.

“James has been brilliant since he first came in, he obviously learnt a lot during the Under-20 Grand Slam campaign and has spoken and led the group really well.

“The linebreak for the try was obviously the highlight, but he made a lot of valuable contributions elsewhere as well (during Wednesday’s game).

“It was an excellent team performance, but I would like to see us explore our potential in attack a bit more. Hopefully the conditions will be a bit kinder on Saturday.”

There are six personnel changes for this afternoon’s second encounter with the French (kick-off 2pm), including a debut for Blackrock College’s Liam Molony in the back row and a move to number 8 for Crescent College Comprehensive’s Ruadhan Quinn.

Hallett admits that a 2-0 series win over France ‘would be brilliant’, but that player development remains the top priority with the overall goal ‘to develop them and give them a taste of international rugby to prepare them for the Under-20s programme next season’.

Following a memorable Easter wearing the green jersey, the Ireland U-19s will have to park their rugby ambitions as they focus on doing well in their school or college exams, ensuring that they continue to fulfil their academic potential. 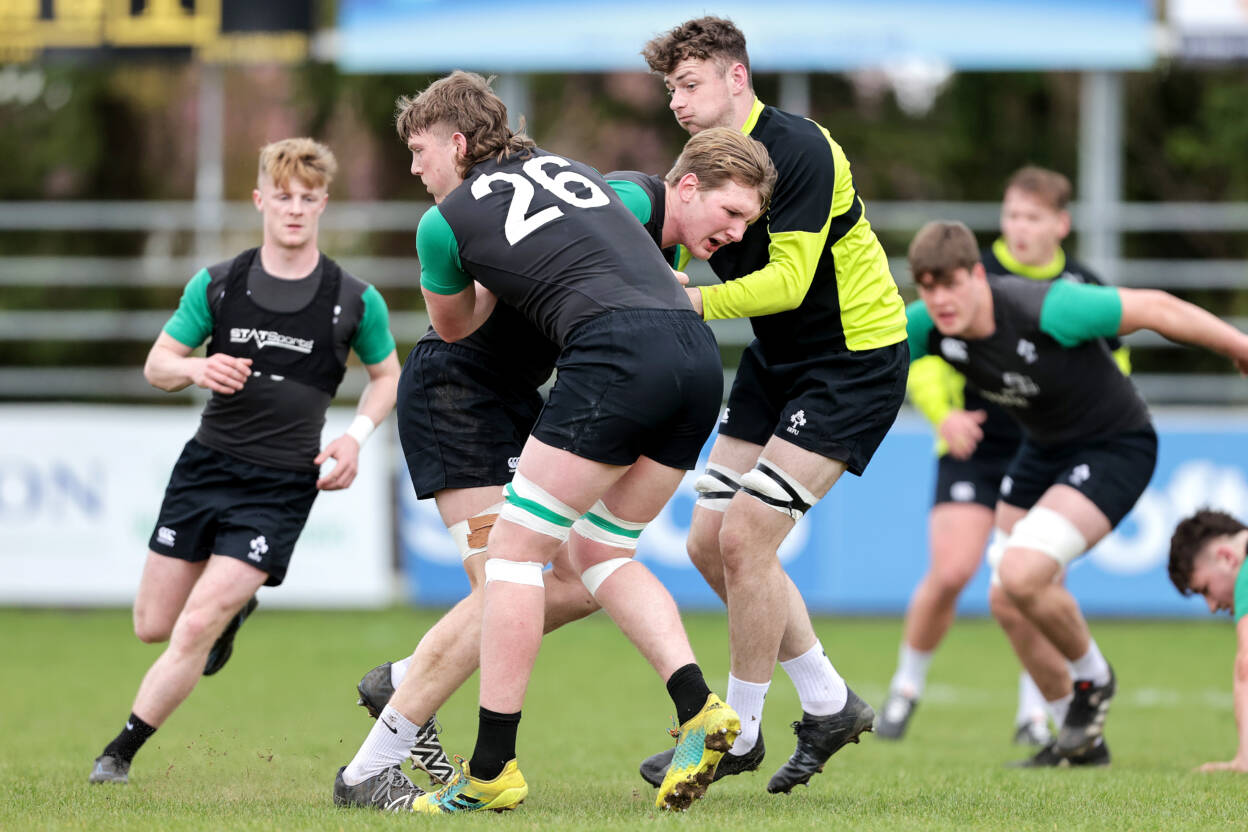 “After that, it’s getting started in their respective provincial sub-Academies/NTS (National Training Squad) 1 programmes and then for all of them it’s trying to get selected for next season’s Ireland Under-20s,” explained Hallett.

The IRFU’s National Talent Squad programme, sponsored by PwC, was established in 2017 and provides high performance coaching, athletic development, nutrition education and additional services to a cohort of identified players aged between 15-20 years of age.

This national programme runs parallel to the provincial talent squad programmes. These Ireland U-19s will go back to their provincial programmes for a development block before the end of the season, according to their head coach.

“Potentially then some time away for the off season, before coming back in for pre-season,” he added.

“I have heard there will be a Celtic Cup again, starting late August, which these guys could be pushing for involvement in before the Under-20s’ screening camps start again.”