Under-20 Grand Slam winner James McNabney led by example as he captained the Ireland Under-19s to a hard-fought 26-21 win over France at Queen’s University Belfast RFC.

In the first of the teams’ two matches, it took a brace of well-taken second half maul tries from Conall Henchy and some gritty defending in wet and windy conditions for Ireland to prevail.

Kieran Hallett’s charges dug their heels in through sin-binnings for Oji and George Shaw, showing their battling qualities as hooker Henchy’s scores – both converted by Sam Prendergast – put them in a winning position at 26-16.

There was plenty of late drama as Ireland, who lost number 8 Shaw to a second yellow, scrambled furiously to keep the French out. Replacement Arthur Diaz’s last-gasp try was of little consolation to les Bleuets. 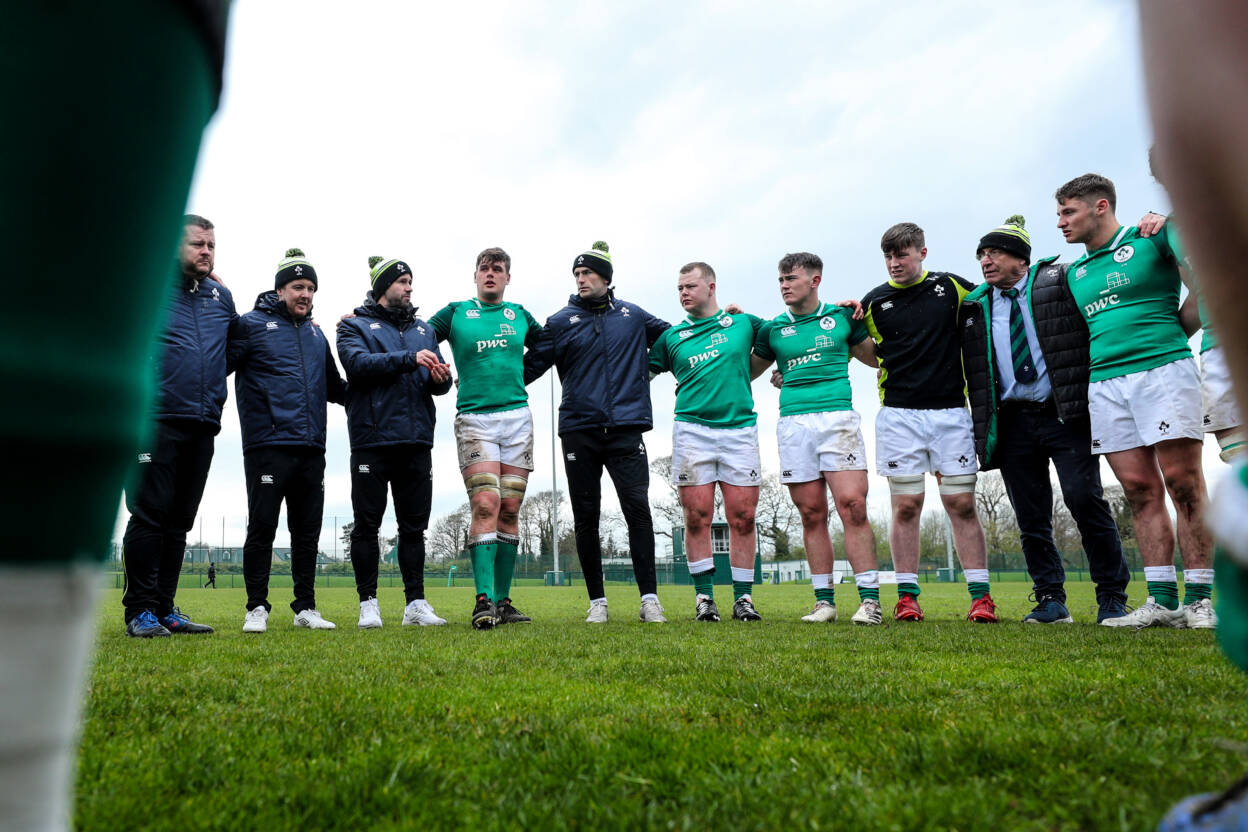 The two sides will certainly be battle-hardened for their final clash of the Easter break, which takes place at St. Mary’s College RFC’s Templeville Road ground on Saturday (kick-off 2pm).

France stole a march on their hosts with a well-worked try after barely a minute’s play. Putting a number of phases together straight from the kick-off, flanker Jegou hurtled onto a short pass to score with full-back Mondinat converting.

Much to the home crowd’s delight, there was a quick-fire response from Ireland who scored from their first decent bit of possession.

McNabney brilliantly handed off Léon Darricarrere and tore through a gap on halfway, weaving past Joseph Exshaw to reach the 22 where he offloaded to Henchy who set up Oji for a neat finish from 10 metres out. 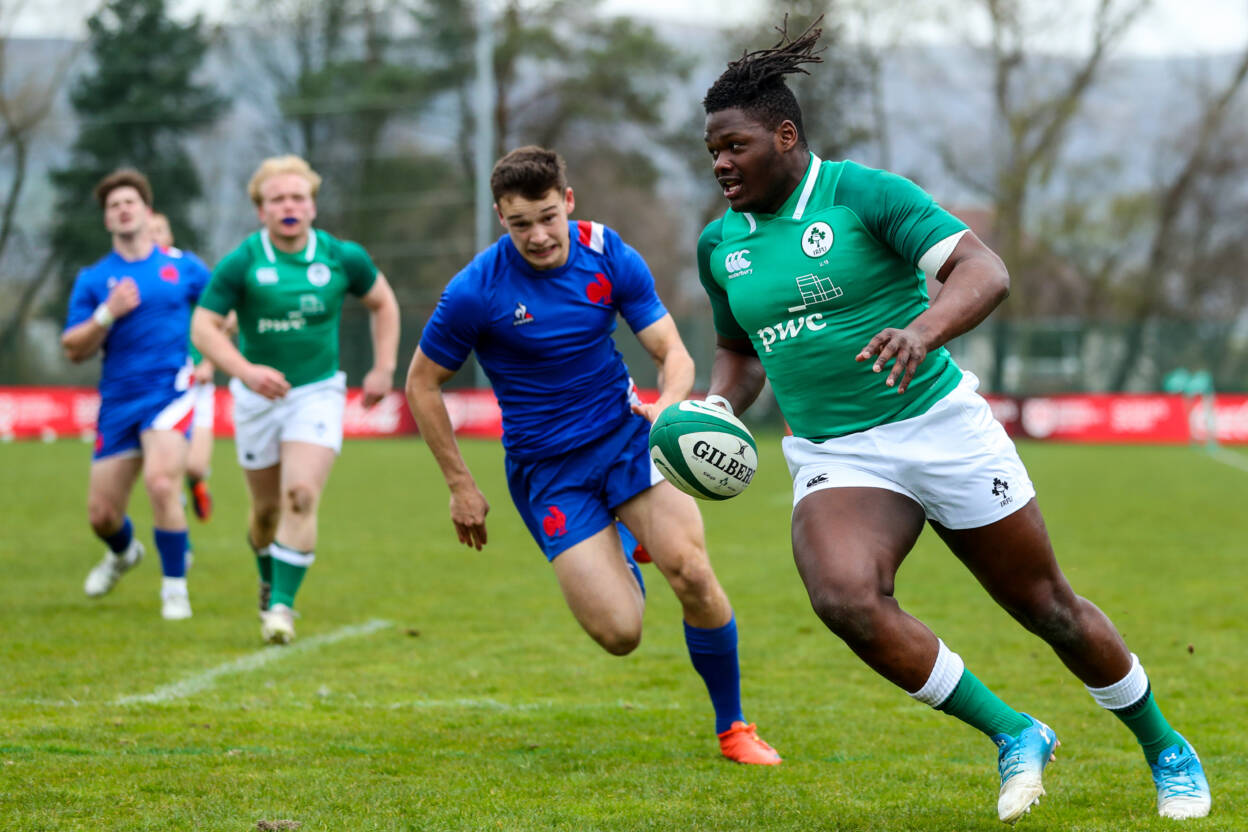 The tricky wind saw Prendergast miss the conversion from the left, and in a tit-for-tat opening spell, Mondinat replied with a close-range penalty for a 10-5 French lead.

Oji took out openside Clément Sentubery in the air at the restart, earning a yellow card, but Ireland held firm in his absence and their only concession was a second Mondinat penalty.

Despite a miscued lineout, Ireland maintained a foothold in the French 22 with McNabney and abrasive lock Charlie Irvine leading a successful choke tackle. The resulting possession saw winger Oji threaten with a strong run.

The Irish maul worked out the second time from a penalty, Henchy being stopped short before a series of pick and drives ended with tighthead McCarthy burrowing over on his own in the 29th minute.

Prendergast’s conversion made it 13-12 and he needed to make an important tackle on Yerim Fall as France launched a late surge, pressing for their second try.

Their forwards were held up but Mondinat added to their tally after Shaw’s sin-binning for tackling Liam Rimet from an offside position as the scrum half looked to break around a ruck. It was the last kick of the half. 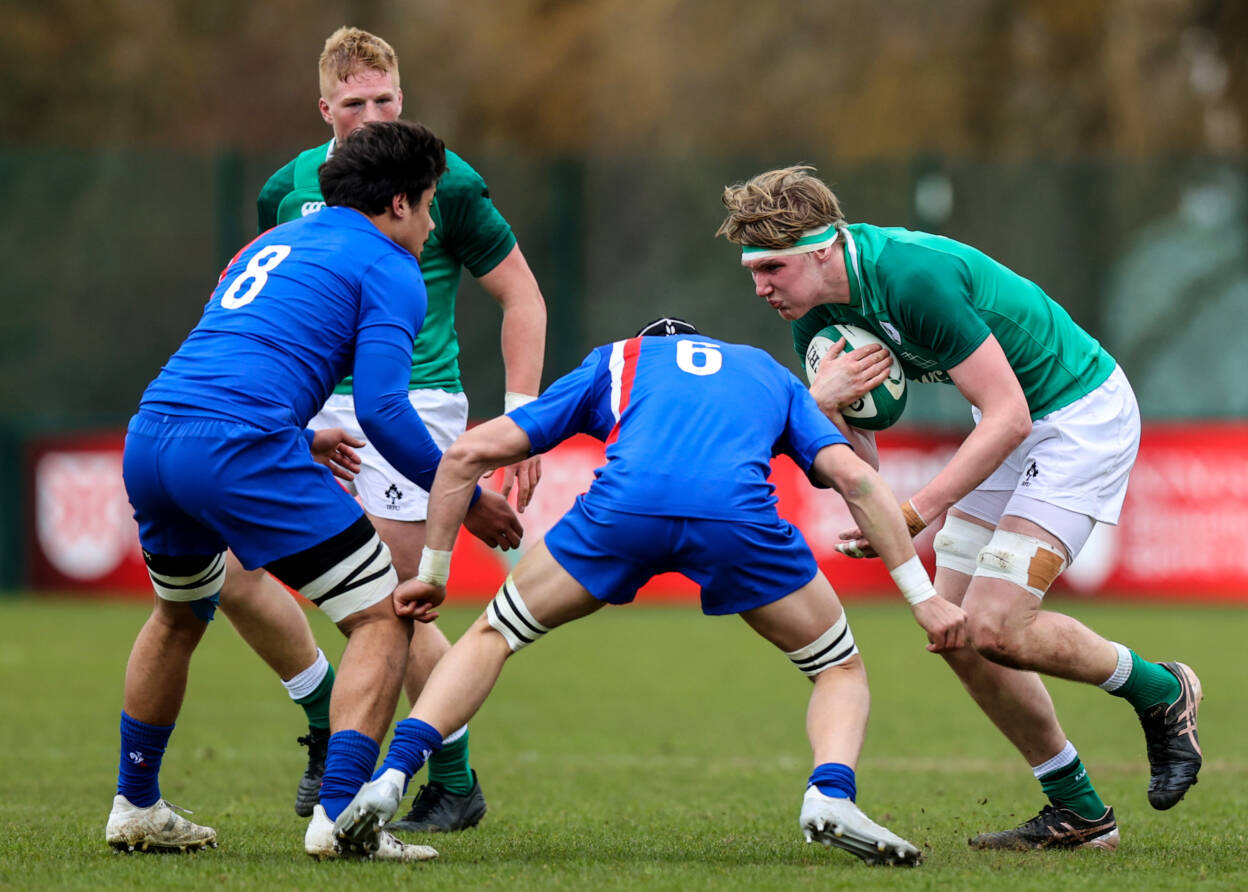 Play resumed with 14-man Ireland having the wind and rain at their backs, yet France almost repeated their fast start from the opening period. Referee Andrew Cole could not see a grounding for Sentubery’s effort, with Prendergast and Liam McCarthy holding him up.

Good kicking from Prendergast, combined with Irish pressure at a French lineout, allowed the home side to get back into scoring range. From a second maul opportunity, Henchy was driven over in clinical fashion.

Prendergast’s well-struck conversion from the right gave Ireland a 19-16 lead, which was doggedly defended as France built momentum before Paddy McCarthy and Shaw got in at the breakdown to win a clearing penalty.

Mondinat pushed a kickable 52nd-minute penalty wide, and a costly French turnover and penalty against them allowed Ireland access into the 22. Crucially, another well-controlled lineout drive saw Henchy score with 11 minutes remaining. 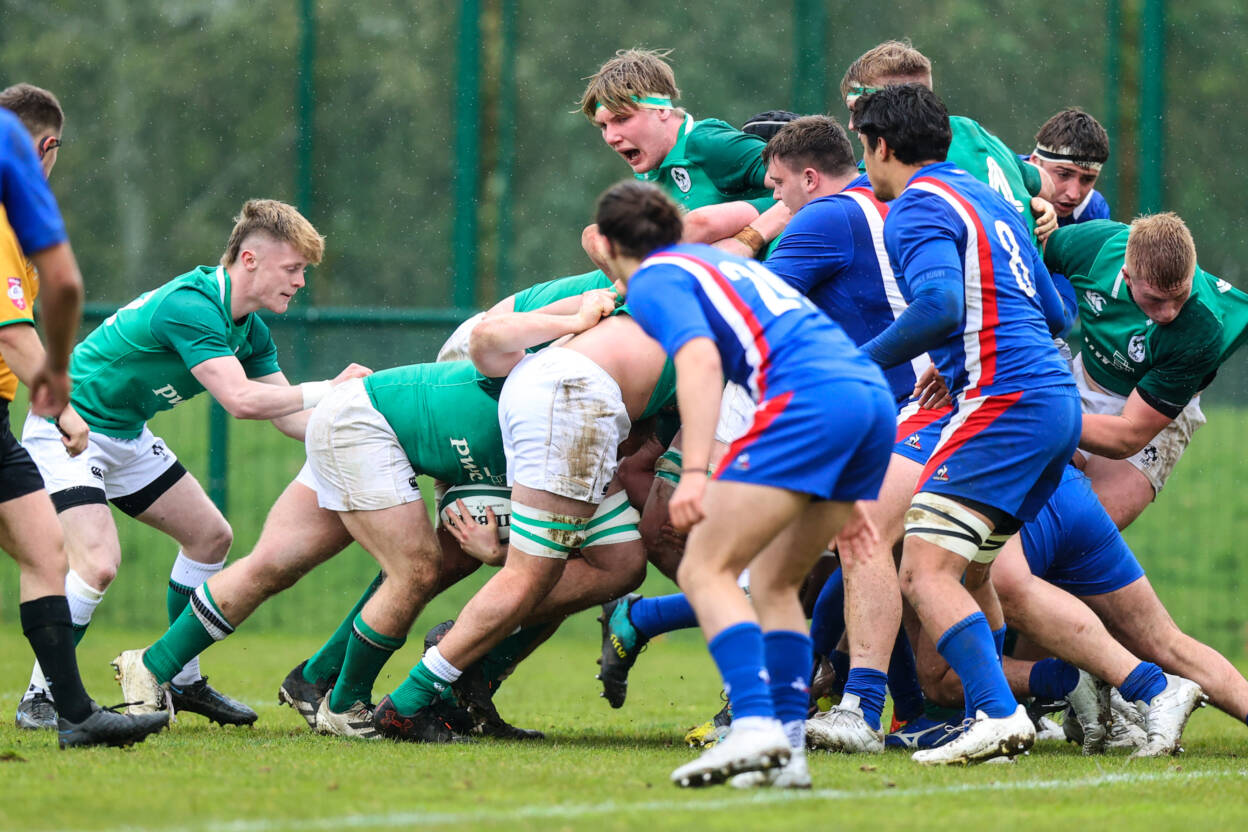 Hallett’s young guns led by 10 points after Prendergast had curled his conversion between the uprights. With their bench providing a timely burst of energy, France ended the game on the front foot.

Ireland showed immense commitment and resilience in defence, clinging onto their hard-earned lead by holding up French players on four separate occasions – either right on the try-line or behind it.

Too many team penalties led to Shaw’s second yellow in the dying minutes, but McNabney and his team-mates had done enough to see out the victory despite Diaz’s snipe from a ruck to the right of the posts. 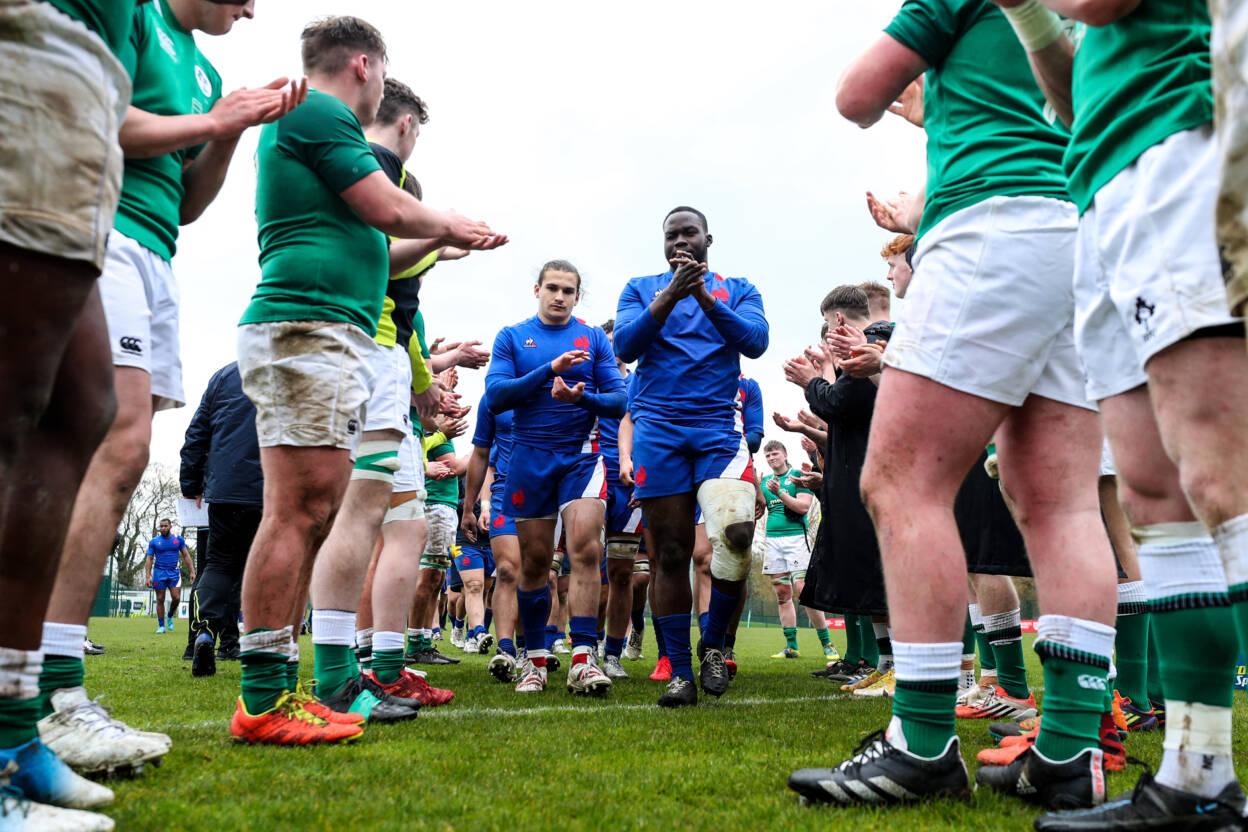