Katie Fitzhenry’s promising squad made history in Edinburgh as the first Ireland Under-18 Women’s team to play a full international match. They took on Wales over 70 minutes on the final day of the U-18 Women’s Six Nations Festival.

Ireland were right in the hunt at half-time, cancelling out an early Nel Metcalfe try with a terrific score from out-half Kate Flannery which had the sides level at five points each.

Having conceded for the first time in the tournament, Wales managed to build momentum again with quick-fire second half tries from Molly Wakely, off a maul, and Lowri Elias to take a 17-5 lead.

Fitzhenry’s charges hit back on the 50-minute mark with a powerful Hannah Wilson five-pointer. Their late push for a levelling try went unrewarded but they more than played their part in an exciting game watched by the Ireland senior team’s coach Greg McWilliams. 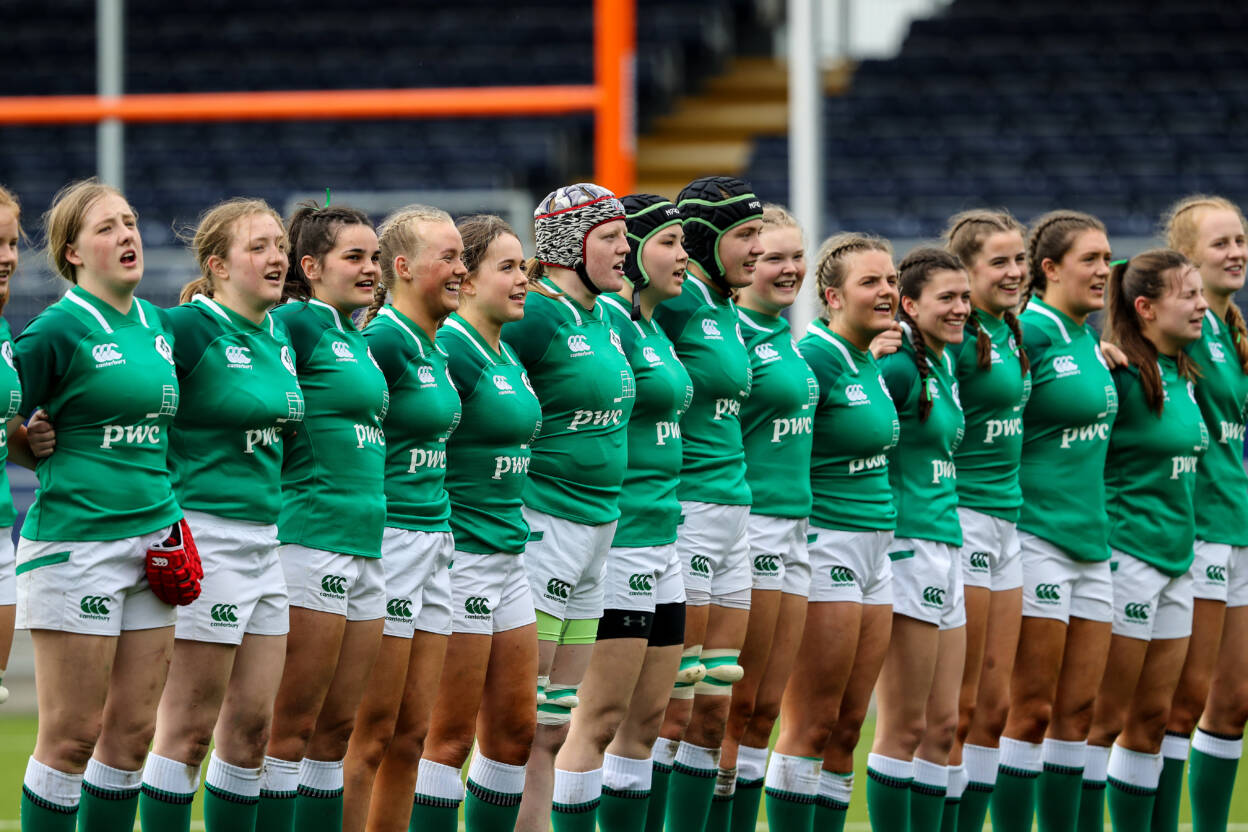 Wales kicked off on the all-weather pitch and within two minutes had their first score. Jess Rogers juggled a pass and the ball went loose, but Gabby Healan did well to tidy it up and release pacy winger Metcalfe to score in the left corner.

A strong shove at an eighth-minute scrum earned Ireland a penalty, and a further penalty, won well at the breakdown by openside Amy O’Mahony, provided the platform for their first purple patch in attack.

Captain Éabha Nic Dhonnacha used successive penalties to punt her side deep into the Welsh 22, while Portlaoise lock Koren Dunne showed her ball-carrying ability as she made some hard-earned metres.

The breakthrough came in the 18th minute, Ireland winning a free-kick from a scrum and Dunne carrying hard again. Out-half Flannery broke to the left, ducking inside a tackle and expertly reaching out to score despite the presence of two defenders.

The Fethard starlet was unable to convert her own try, her kick falling short from the left. Healan’s threatening run in response was foiled by a Robyn O’Connor tackle and Dunne’s swooping in for turnover ball. 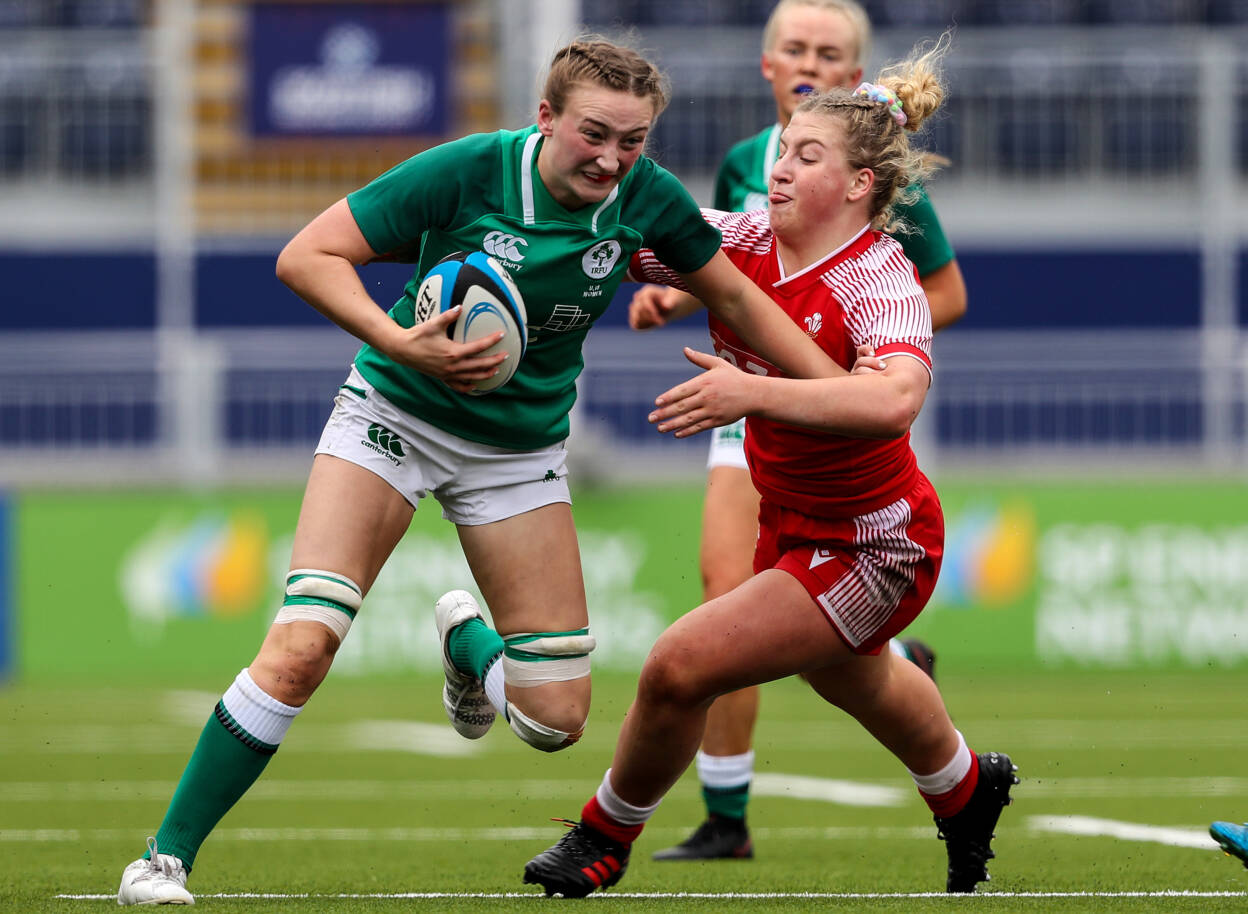 Sarah Delaney’s hard work at the breakdown earned a clearing penalty a few minutes later, and Ireland’s ability to sniff out turnovers saw them play much of the remainder of the first half deep in Welsh territory.

Full-back O’Connor increased her running threat, her second cut a lovely weaving run out to the right, and Cill Dara hooker Delaney agonisingly knocked on in the act of scoring from a maul.

Early pressure on the resumption yielded that maul try for Welsh hooker Wakely, who broke away to score with 40 minutes on the clock. Mollie Wilkinson’s conversion attempt came back off the right hand post.

A tremendous breakaway try followed soon after as Grace Bellamy darted down the right touchline and passed inside for the newly-introduced Elias to go over beside the posts, with the conversion neatly added.

The excellent Dunne pointed the way back for Ireland, quickly pocketing another textbook turnover at the breakdown. She followed up with a strong burst down the left wing, although Wales managed to bump her into touch.

Replacement prop Sadhbh McGrath pounced on a loose Welsh lineout to see Ireland threaten again, only for a move from a tap penalty to result in a turnover and then Nic Dhonnacha sent a penalty wide of the posts.

Wales were leaking more penalties, though, and replacement Sian Jones paid the price with a sin-binning. O’Connor’s leg-pumping run got Ireland into scoring range and Wilson duly delivered, piling over after good carries from Jane Neill and Jorja Battishill. 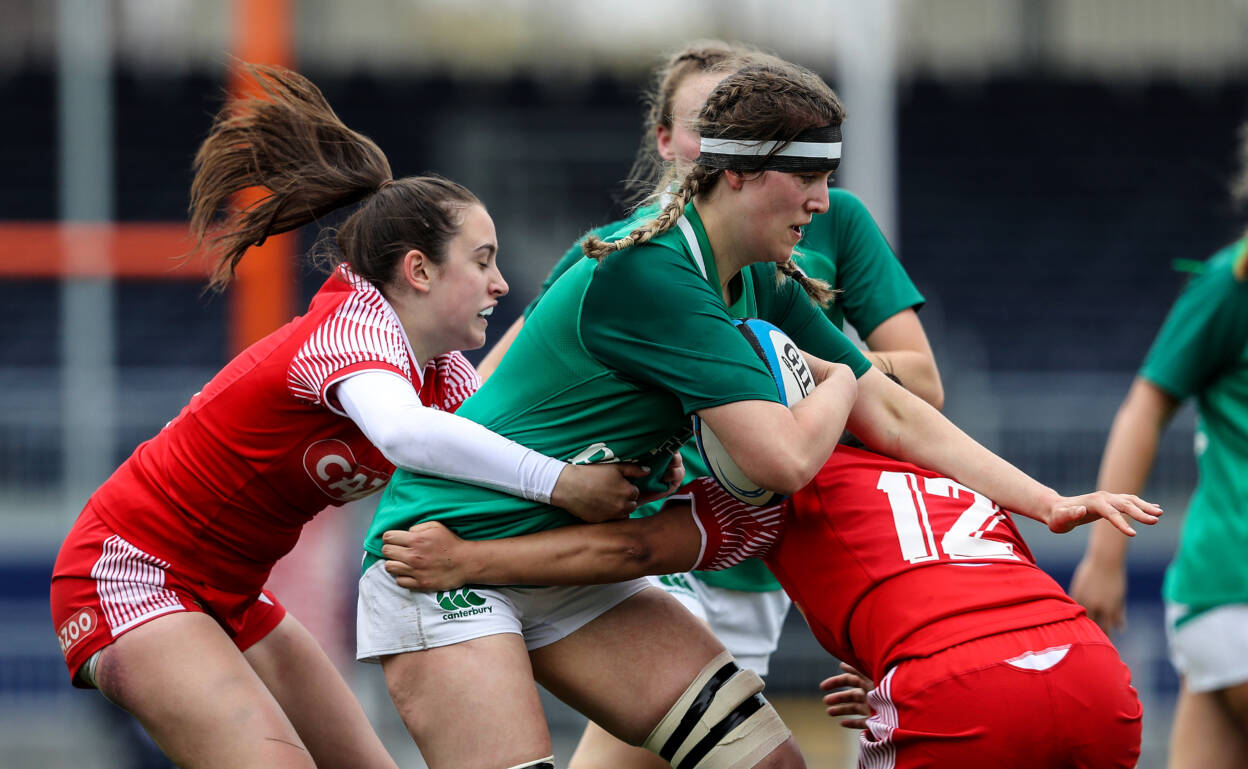 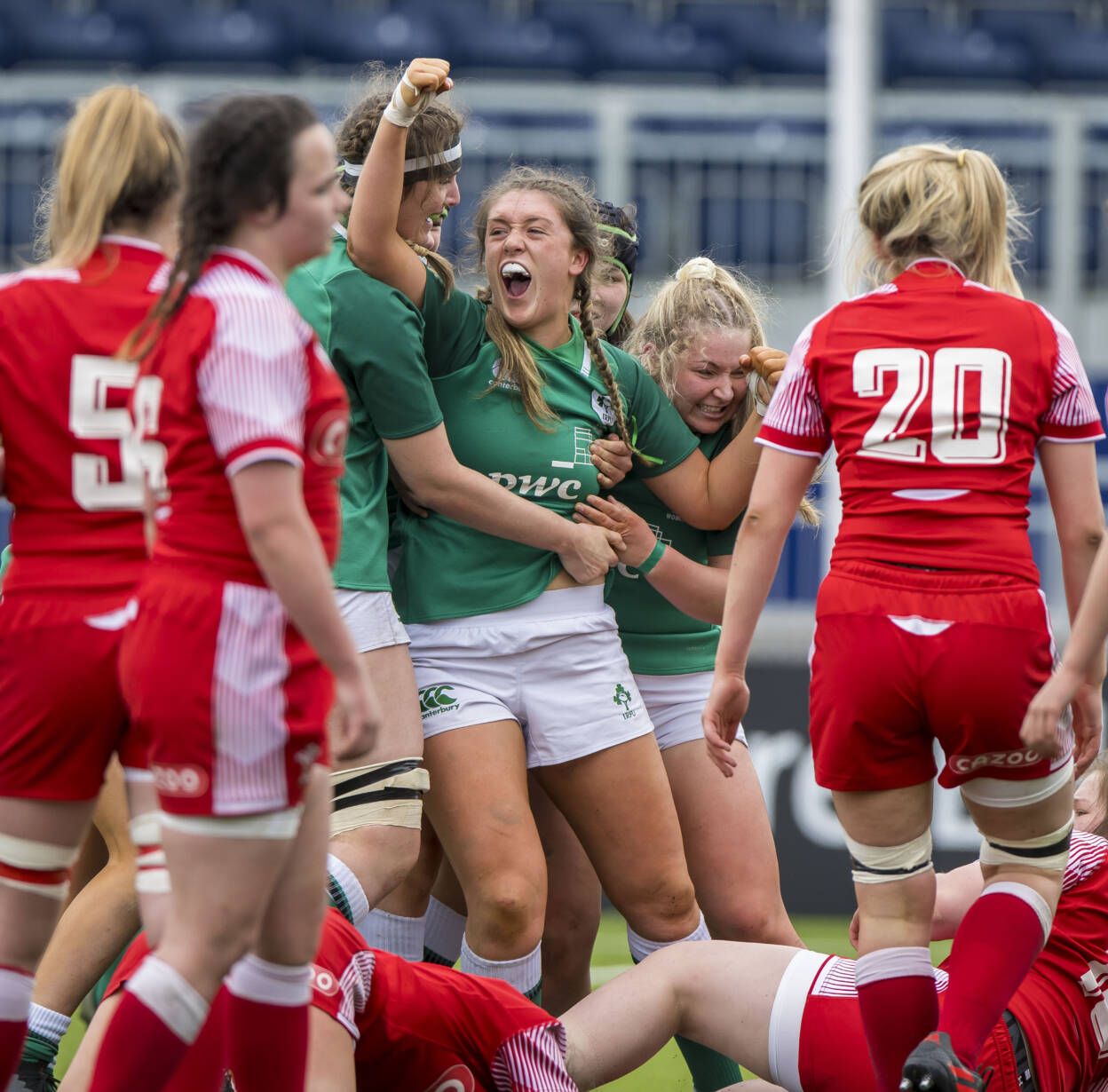 The missed conversion from Flannery left seven points between the teams, the out-half soon combining with Clara Barrett to win a penalty at the breakdown. McGrath, who provided impact off the bench, got Ireland over the gain-line.

The girls in green gave it their all in search of a late levelling score – Jade Gaffney made a half break, Katie Corrigan and Flannery both secured two more turnovers, and Eva Sterritt had an incisive last-minute run – but Wales held on to take the spoils.

Reflecting on her team’s performance, head coach Fitzhenry said afterwards: “I think our handling errors didn’t really help. By the end of the game we were up to around 19 excluding penalties, so that was something we needed to work on.

“Pitch conditions were also different and made the ball that bit greasier. Unfortunately it just wasn’t the girls’ day today.”

The former Ireland 15s and Sevens international added: “They adapted really well to the international set-up and having played Saturday already there was definitely less pressure having already experienced pulling on that green jersey for the first time.

“There were still nerves there but I think they stepped up really well and gave everything for that jersey. I am super proud of these girls. I know how hard they’ve all worked these last few weeks and months.

“I feel incredibly privileged to have been able to give them this opportunity and win or lose I was always going to be proud them because they are such a great bunch.

“They are such great rugby players and they will definitely be superstars in a couple of years time.” 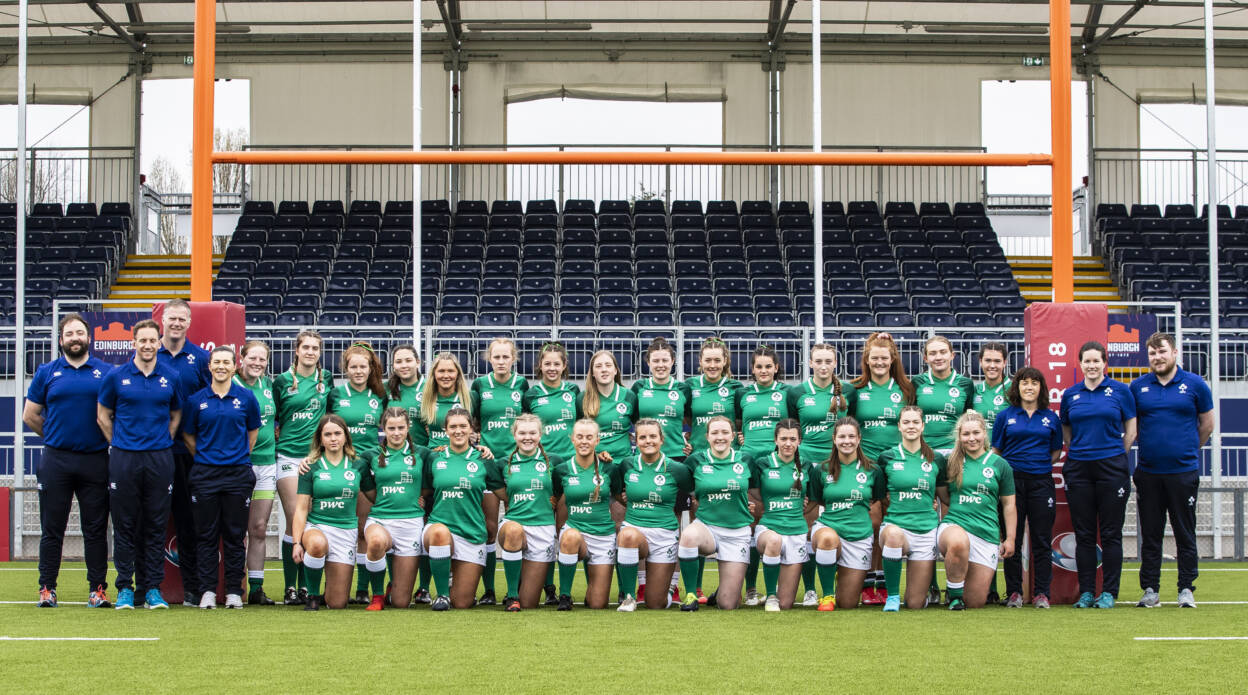