St. Munchin's College scrum half Jake O'Riordan is pictured in action for the Ireland Under-18 Schools team against France ©INPHO/Loic Baratoux

Despite coming out on the wrong side of the result in their Under-18 Six Nations Festival opener, Ireland Under-18 Schools head coach Paul Barr has been delighted with the application shown by his squad in difficult circumstances.

With an early try from Brian Gleeson and eight points off the boot of Jack Murphy, Ireland opened up a 13-0 lead against festival hosts France in Marcoussis. Jacob Sheahan added a second half try, but the powerful French team emerged as 28-23 winners.

The Leinster Schools Senior Cup final only took place the previous weekend, so the players from Blackrock College and Gonzaga College selected by Barr only arrived into Ireland camp just three days before the first round clash with France.

The four Blackrock players in the squad, along with Gonzaga’s Hugo McLaughlin, are all promoted to the starting XV for today’s encounter with Wales (kick-off 2.20pm local time/1.20pm Irish time). Live stream here.

“Those boys didn’t really meet their team-mates until they came into the hotel last Wednesday. France had already played three Test matches prior to the tournament,” explained Barr.

“You could see that the familiarity was a problem for our boys. They just weren’t familiar with each other, as much as you would have liked.

“They compensated by just engaging with their own roles in the game, to the best of their ability. They really went at it. I was really happy with the attitude they showed and the full game commitment.

“The subs came off the bench and put in the same kind of effort, and we finished strongly. All in all, I’m very happy with them. I find it remarkable when you look at the Leinster Schools (Cup) finishing date and the prep window we had.

“There’s no doubt, preparation time-wise and game-time-wise, we’re at a huge disadvantage and yet you wouldn’t have known the other day. That’s a credit to the boys, it really is. They’ve taken to it like ducks to water.” 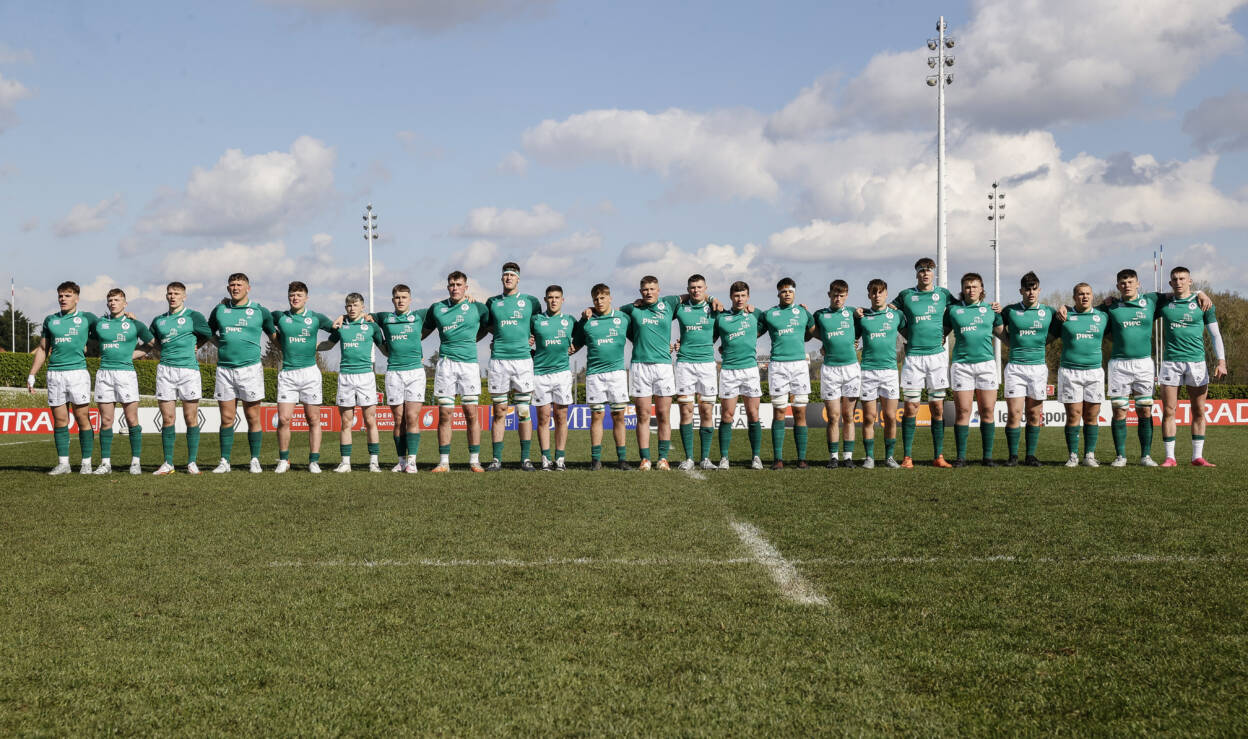 Nonetheless, Barr and the players themselves can recognise there are aspects of their performance in the French game that will require improvement as they aim to get the better of Wales.

“We gave away 14 penalties. We’d be saying to the boys, ‘you can’t win with that’. The top end of single figures is realistically the goal for teams winning Test matches like this.

“Five of the penalties were just being a little bit enthusiastic on the defensive line speed, just jumping it. We didn’t have to give them away and they’re the ones we’d target with them.

“There are times in the game where it is hard not to give away a penalty or you can be unlucky with an interpretation of the breakdown, but jumping early on an offside is definitely an avoidable one. I think they’re the easier learnings for them and they’ve shown great engagement with that.

“I think the atmosphere amongst the boys is super and I think we’ll get their best efforts against Wales. What that yields is yet to be seen in terms of results, but I think we’ll definitely get the best efforts they have to give.”

On the injury front, the only player that is ruled out of contention is Kamil Novak. A star with Christian Brothers College in Cork, he damaged his ankle in the warm-up before the French game.

His spot in the squad will be taken up by Tom Brigg, who shone in the second row for Blackrock College in their Leinster Schools Senior Cup final victory over Gonzaga.

“He (Novak) flew home last night. He had the option to stay, but in fairness to the boy, it’s tough to have missed out on a Test because he got injured before the first one. He made his own choice and he departed last night.

“He was replaced by Tom Brigg and Tom flew in last night. Tom will be capped (today), which is great for him and tough on Kamil. Other than that we’re good to go with a full squad.” 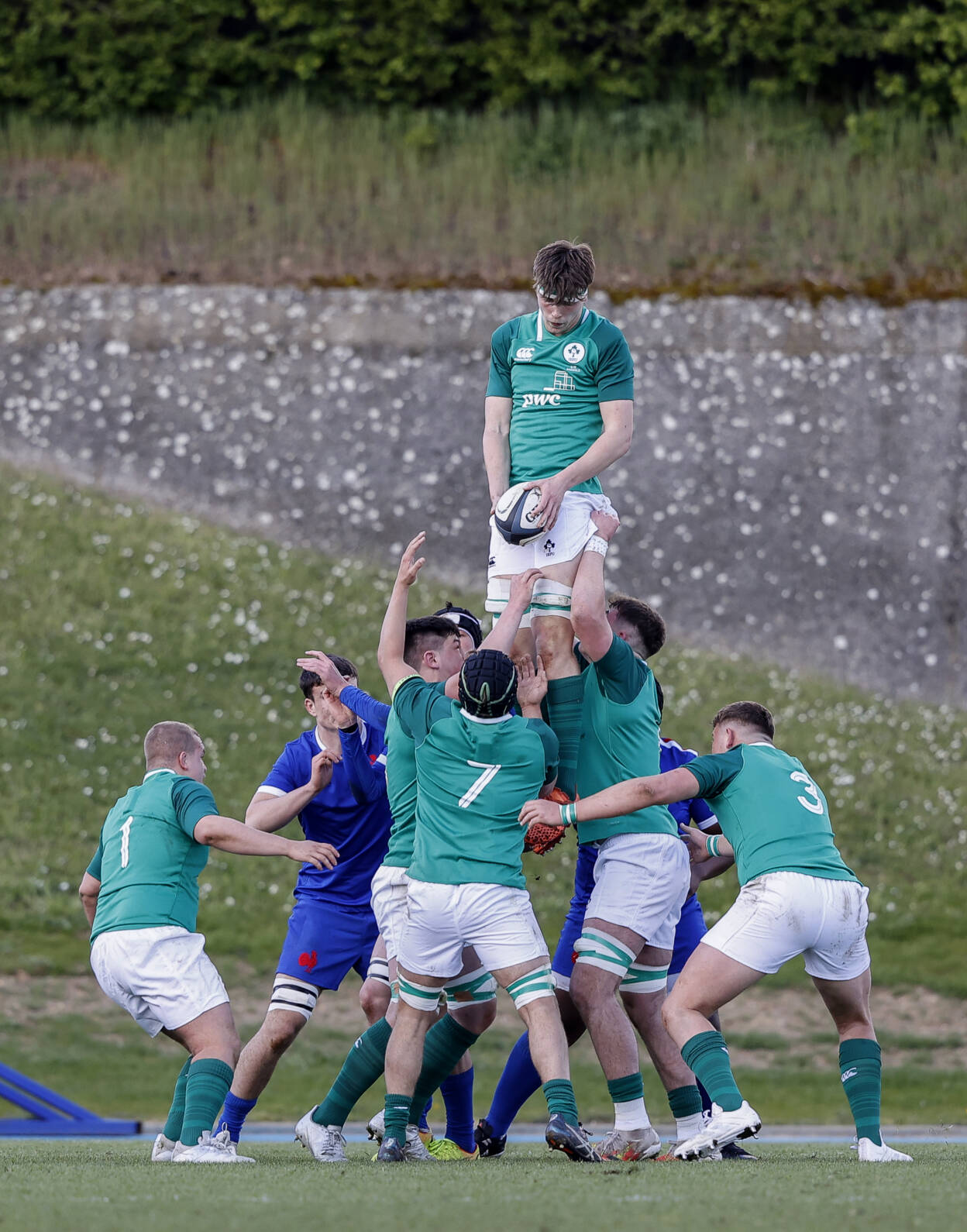 By the end of this afternoon’s match against the Welsh, Brigg, one of 11 replacements on an extended Irish bench, will be the only remaining member of the squad who is yet to start in this Six Nations Festival.

From Barr’s perspective, the opportunity to give substantial minutes of international rugby to the players is far more important than simply focusing on results.

“I know you’re hearing this an awful lot, but these are players that have had two years of critical development stages affected by Covid,” he acknowledged.

What was brilliant this year is that they got through a full competitive season and now they’re here at an international tournament absorbing lessons and experiences. Every moment of every day here really.

“I think we’re going to see a huge benefit of them being here. Our policy is to make sure all these boys play in two games. They’ll start one definitely and they will all play in two.

“Some will play in three. They’ve taken to it wholeheartedly as a bunch, they’ve been phenomenally easy to deal with.”

Following today’s second round, Ireland will finish off their campaign in Marcoussis by lining out against Italy on Sunday morning (kick-off 11.30am local time/10.30am Irish time).

Barr has kept a close eye on how the Italians have progressed to date in the tournament and he is impressed with what he has seen.

“Talking to some of the Italian people, their structure seems to be uniquely tailored to their own situation. They bring these players together into a school environment essentially. They are in one central location over a couple of years.

“For us going into that game, the preparation window, it’s like going up against a Schools Cup-winning side with a team that is thrown together. With them being the Schools cup-winning side based on how they’re structured.

“They come up with a way to suit their own development within Italy and it seems to be working really well for them. I can’t get over their physical profile.

“Obviously they’re bringing them into a centralised location and they’re having their education there, but they’re obviously getting very rounded coaching in terms of S&C, and in terms of technical input. That will be a really interesting challenge for us against Italy.”